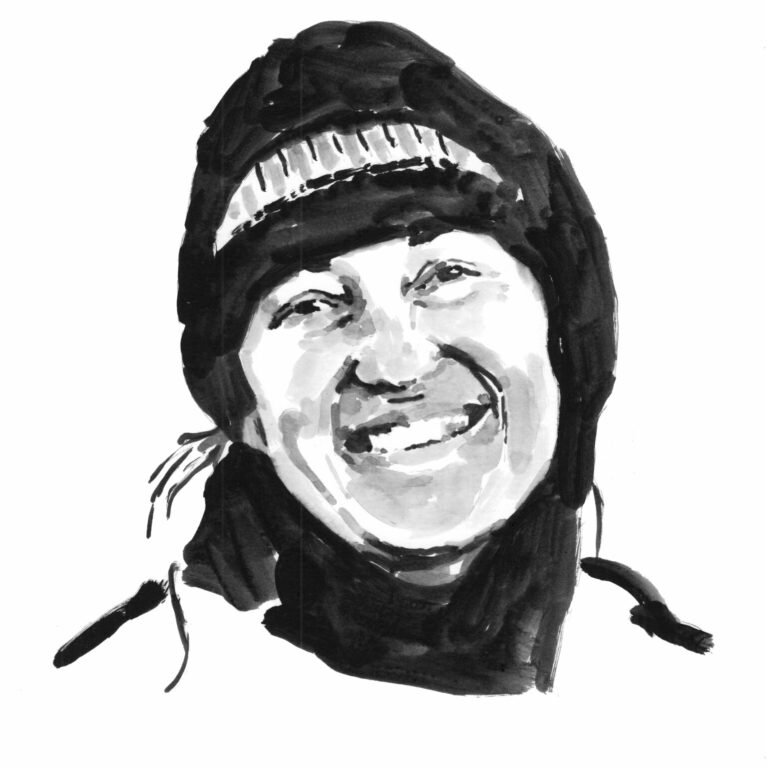 It was at the age of nine that I first heard a recording of a humpback whale singing. Instantly I was both captivated and extremely curious. This was my first emotional response to sound, and the inspiration that led to a life-long commitment to understanding the behaviour of whales. After I graduated, my dream was to work with like-minded people and build a marine research station, off grid, in an area where whales thrive and the presence and impact of people are minimal. Like the whales, I am constantly migrating from one region of British Columbia to the other, following... 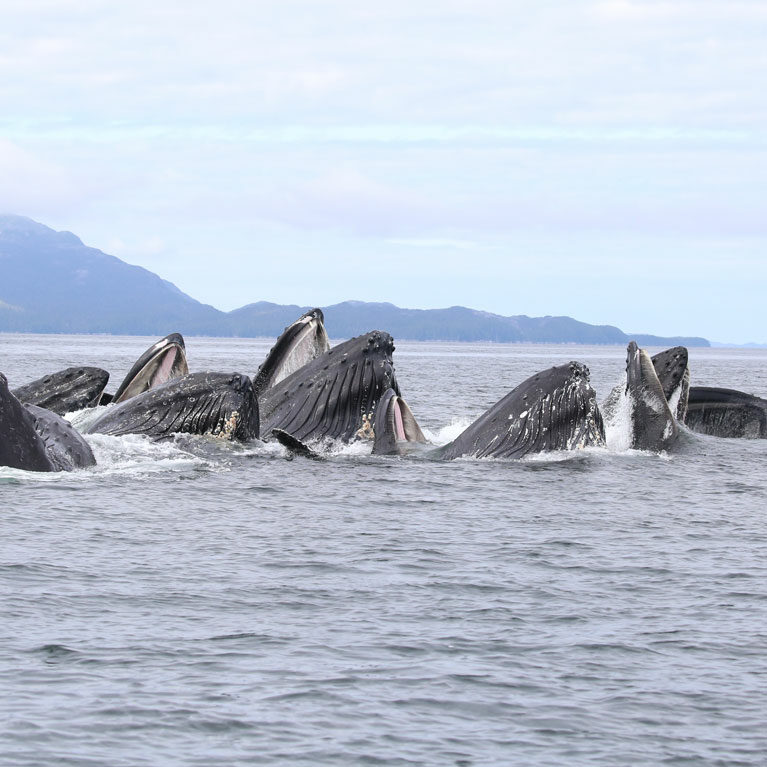 Lost in the Moment
There are very few things in this world that can have me jumping out of bed before dawn. Yet I found my legs carrying my body forward and towards the door before my eyes had time to open or my mind could decipher why I… 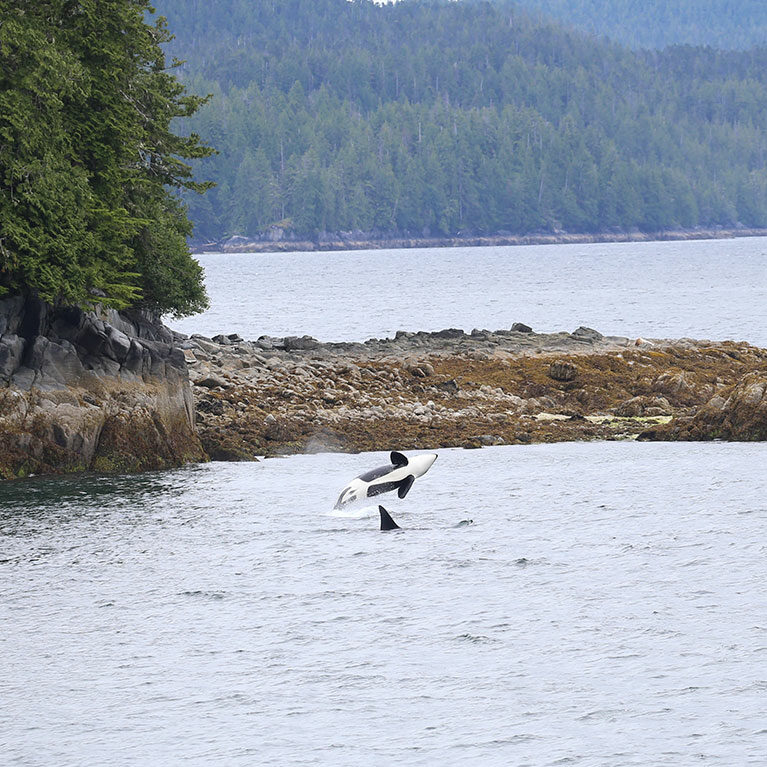 Transient Orca Food Sharing
Transient orca are a unique ecotype or variant of the killer whale species. They belong to a population found only in the North-East Pacific and they are specialized predators, predating exclusively on marine mammals. It is believed that thousands of years of evolution combined with… 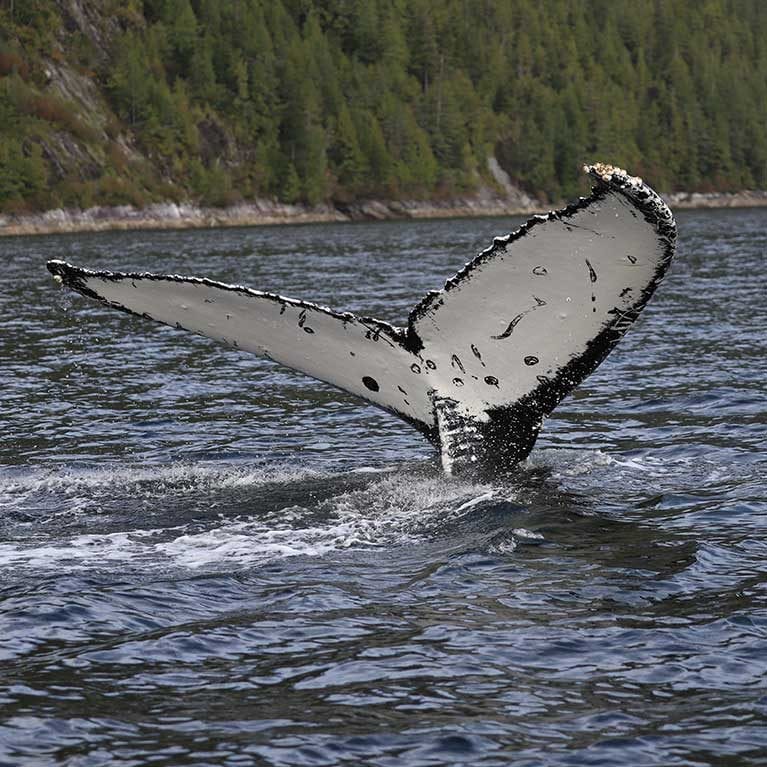 Resting Whales
We awoke to a group of 2 humpback whales sleeping just meters from shore. It was the sound of their soft blows that nudged us one by one from our sleeping bags. At first glance, you would have thought this was one whale as they… 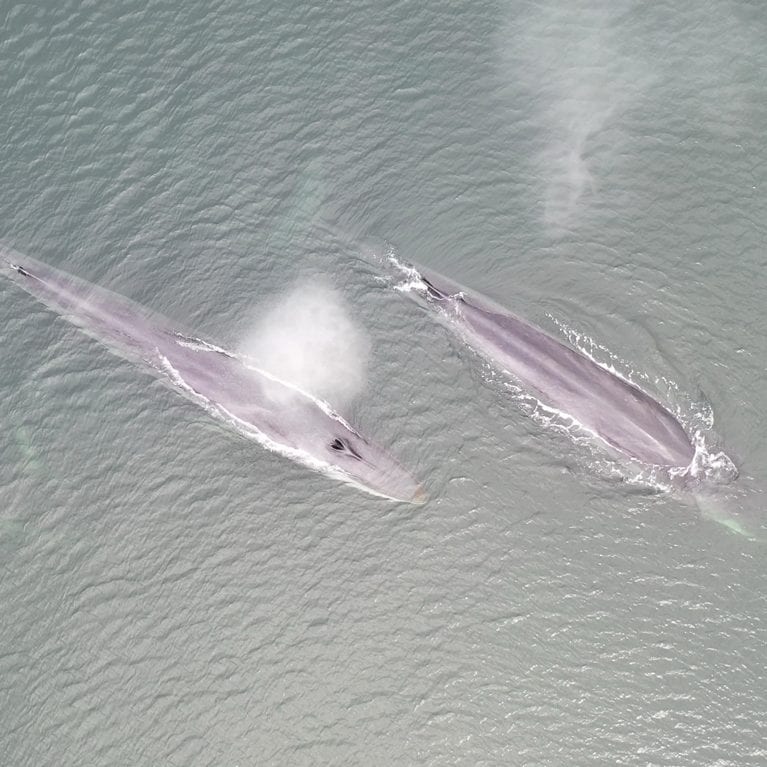 Fjordic Fin Whales
Working within  Gitga’at First Nations territory is an incredible privilege for many reasons, but the thing that hooked me when I first came here a decade ago was the fin whales. The fin whale is an extraordinary species: the second largest animal on earth (ever),… 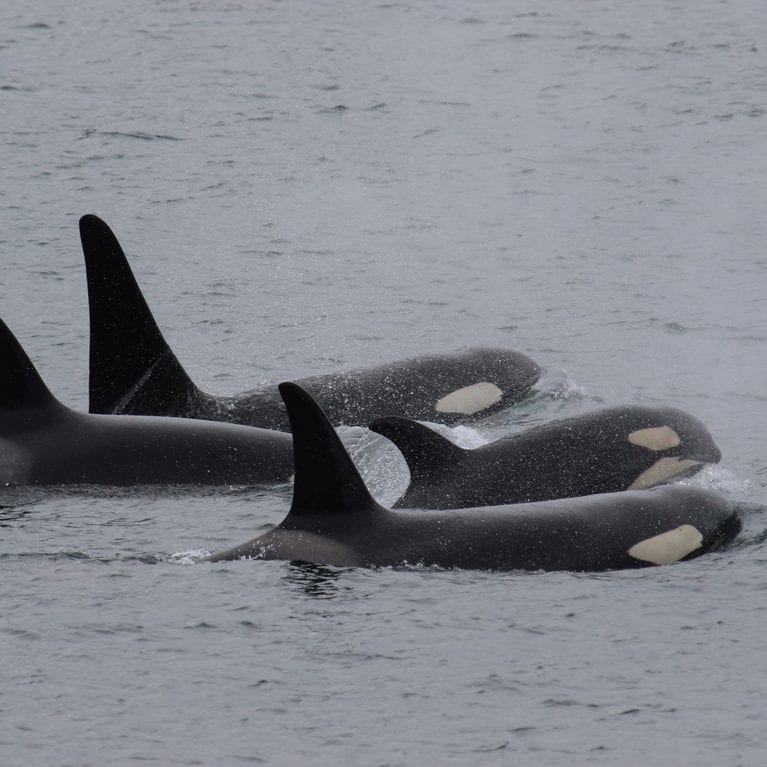 The A30 orca family
Megan has worked with both BC Whales and Orcalab since 2012. She now manages one of the camps for Orcalab with a focus on outreach and video projects. It’s around 5 am when I begin to stir. The faint sounds of the resident orca family… Visits from the A30 Family
Megan has worked with both BC Whales and Orcalab since 2012. She now manages one of the camps for Orcalab with a focus on outreach and video projects. It’s around 5 am when I begin to stir. The faint sounds of the resident orca family…

Whale snot for conservation
As whale researchers, often we dream of having some form of x-ray vision superpower to be able to see fully the whales in their hidden world under the waves – and although we haven’t quite yet achieved superpowers (!) it is truly astounding how much… 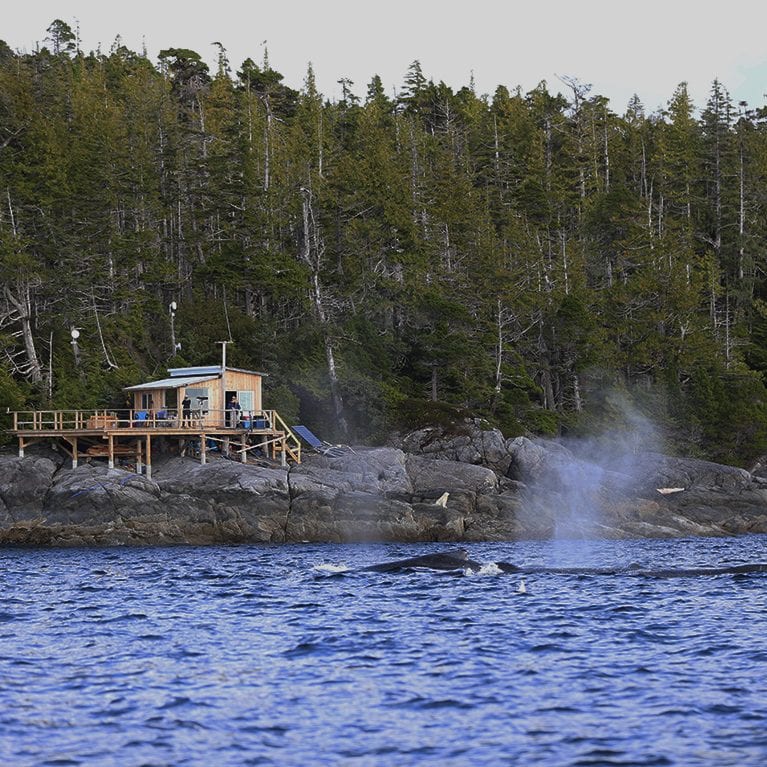 Getting ready for whales
So it beings once again. We have arrived back on Fin Island, our most remote whale research station that BC Whales operates in partnership with the Gitga’at First Nation of Hartley Bay and WWF-Canada along the north coast of BC. Similar with many, we had…

Whales and Drones: A New Perspective
I’m stumbling down the trail of the forest as fast as I can, pulling a woolen jumper over my head and wiping the last of the sleep from my eyes. It’s 05:30 AM and I’ve been ripped from a dream by the exploding sound of… 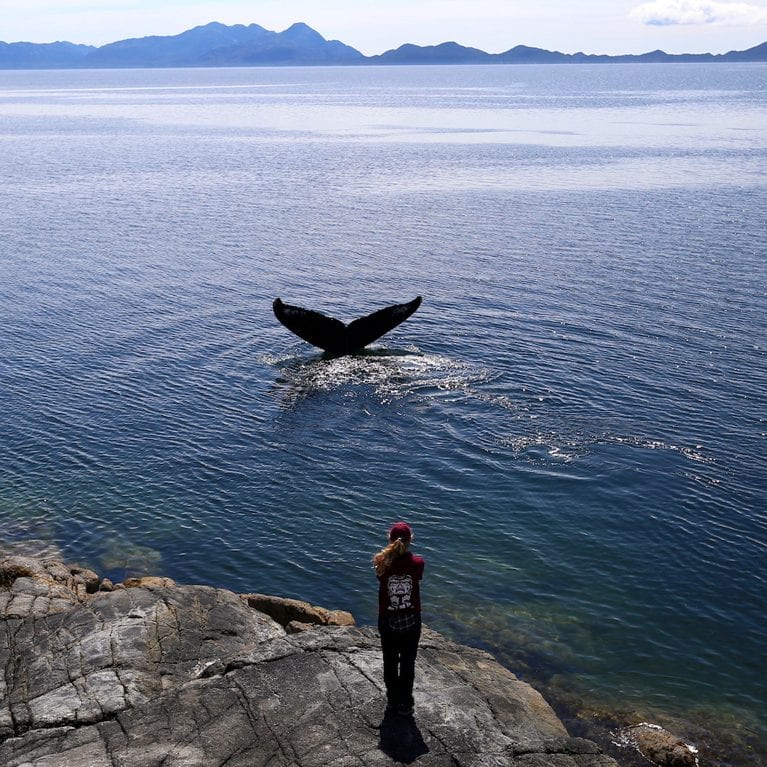 The Season Begins
Our journey to Fin Whale Research Station began on a 12-hour ferry from Port Hardy B.C, the ride up was rocky at best, with a wind strength approaching 40 knots. With all the cabins taken, we spent the night camped out at the bow of…
Project details
Key objective

The overarching objective of our long-term scientific monitoring of recovering whale populations along the coast of British Columbia is to combine various novel scientific methods in order to expand our understanding of the cetacean populations that actively use these waters. By means of a powerful fusion between deep First Nation knowledge of coastal ecology and the work of local and international researchers, the BC Whales team is determined to develop a platform of partnerships to successfully protect marine habitat for whales.

As the human impact on our blue planet now reaches even the deepest oceans, this is the critical point in time when we must work tirelessly to protect the last remaining areas of thriving wilderness. The coastal waters of British Columbia harbour both threatened and recovering populations of orca, humpback and fin whales. The outcomes of this project increase the research community’s capacity to manage and protect cetaceans, as well as provide up-to-date information that can be applied to the management of numerous industrial development plans and other human ocean-based activities that place these species at risk.

The North Coast Cetacean Society (NCCS), a non-profit organisation, has been actively protecting cetaceans (whales, dolphins and porpoises) along the coast of northern British Columbia, Canada, since 2001. We have built two remote whale research stations and established a hydrophone (underwater microphone) network that enables us to monitor the submarine world of whales. In 2017 the NCCS established BC Whales, a team of individuals from diverse backgrounds who are dedicated to protecting whale populations by conducting extensive scientific research and merging it with local First Nation knowledge. We believe that partnerships are essential if we are to gain an understanding of the movement of whales, their social connections with one another and their relationship to their environment. Also essential is our hydrophone network, which enables us to learn more about the acoustic tradition of whales and the overlap in habitat use by different populations, as well as monitor the increasing levels of ambient noise, which could have detrimental consequences for these whales that rely heavily on sound to survive.

We have documented the dramatic return of humpback whales to the entire coast of British Columbia. This species was rarely, if ever, encountered along the coast after the late 1960s because it was extensively hunted. Now we see humpbacks on a daily basis during the field season (May–October) as they feed on krill and herring in these nutrient-rich waters. Thanks to this abundance we have been able to gain valuable insights into the social behaviour and habitat use of this robust cetacean.

The fin whale is the second largest mammal on the planet (trumped only by the blue whale) and it has also returned to these waters, with the first sighting for decades in 2006. Three distinct orca populations – resident, transient and offshore – live along the coast of British Columbia and each has a unique social structure and dialect. We document these carefully via the hydrophone network and visual surveys.

All three of these species are the subjects of our ongoing research projects, which are conducted acoustically, visually (from land and boat) and by drones. The drone project, which launched in May 2019, aims to give a bird’s-eye view of the whales’ social behaviour while also delving into both genetics and the use of 2D imagery to answer important ecological questions.