The A30 orca family

Megan has worked with both BC Whales and Orcalab since 2012. She now manages one of the camps for Orcalab with a focus on outreach and video projects.

It’s around 5 am when I begin to stir. The faint sounds of the resident orca family known as the  A30s filling the small, six-by-four meter cabin perched on the rocks, brings me into consciousness. The world’s greatest alarm clock. I am alone on this island as I wriggle out of my cosy nest, switch on my lamp and fumble around for my glasses. The whispers of light from the start of the day hover faintly above Vancouver Island as I peer out of the cabin, adjusting my eyes. 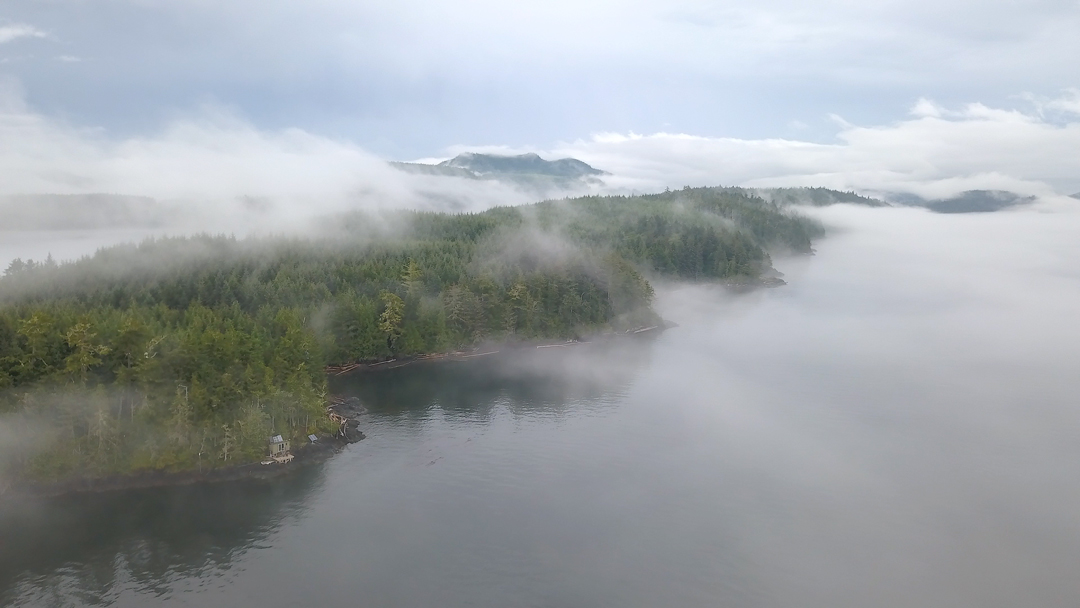 View of the remote Craycroft station. Photo by Megan Hockin-Bennett

I turn down the scanner and listen. The rumbled call of the common murre is interrupted by my most cherished and familiar sound. KWOOF. They’re coming! I scramble around searching for a jumper and shoes, flip the hydrophone back up and tiptoe down the stairs onto the deck. The vocalisations of the A30s are getting louder as they move closer to Cracroft Point. Their squeaks and clicks echoing out of the cabin like a gramophone into the Johnstone Strait; their blows coming ever-closer.

It is still too dark to film, so I sit down on the edge of the deck with the water not less than a few meters from my feet, and wait. It’s silent; the ocean is so still not even the lapping sound over the black rocks beneath fills the air. Just KWOOF, KWOOF, KWOOF.

The high-pitched whistle of a signature call of the A30 orca family pierces through the speaker and I know it won’t be long before they are travelling right under my feet. The dawn chorus has begun and I can hear the croaking of the ravens perched in the misty trees above. The common murres bleat on; undisturbed by the passing whales.

I think back to my 17-year-old self, tucked away in the corner behind the bar of an old English pub – daydreaming about this very moment whilst reading about Paul Spongs work in Eric Hoyt’s book, “Orca: A Whale Called Killer”. How I would close my eyes at night and imagine sitting in this very spot counting whales in the dark, making predictions on which family it was.

KWOOF. The sound of the first whale surfacing under my feet brings me back to the present moment. I hear splashes as the little whale finds itself tangled in the kelp forests below. The whale twists and turns as another surfaces alongside, and another. They seem to stop in their tracks as if they are waiting for the little whale to finish goofing around and catch up. I begin to hear vocalisations above the water in addition to those coming from the speaker behind me. Raspberries and bubble blowing, clicks and squeaks projecting from the heads of the whales right next to me. The little whale finally breaks free and moves on, his elders beside him, nudging him back onto their trajectory. The whales move on past my little hut, and I hear the sound of more blows approaching in the distance.

I know these whales, I know them well. I know their voice; even now it sets my heart pounding just like the very first time I saw them. That was in 2013, my first summer working with BC Whales and then Orcalab. Back then, the A30 orca matriline took a very different form. Grieving the recent loss of their matriarch – A30 herself – the legacy comprised of her two sons A38 and A39. They formed the book-ends of the remaining nine smaller fins including Bend (A72) – A30s granddaughter – perhaps the most distinctive whale of the group with a large notch missing from the front edge of her dorsal. Every year I have returned, this family, that will spend their entire life together, has changed. The older sons, A38 and A39 are no longer with us, Bend, now 20 years old has a baby of her own, Jameson (A108), by her side and with the addition of three new babies, the A30s are back up to a total of 13 whales with two matriarchs: A54 and A50.

Whilst watching this saga unfold the light from the new day is well and truly emerging. I suddenly realise that there may well be enough light to film. I scurry inside the cabin, grab my camera and tripod and strap it down to the platform just in time. The second group are approaching fast. It’s still pretty dark, but there is just enough light… I think. I pick my frame carefully and follow my instincts on where I think the whales will surface. A mixture of luck and practice combined sees a single female surface perfectly in my viewfinder. Inside I’m dancing: my favourite thing occurred, it happens only in the most calming of sea states: surface tension. The moment just before the whale breaks through the surface where the water forms the most satisfying unbroken bubble over its head. Then, POP. The heart-shaped billow of mist dissipates into the air. 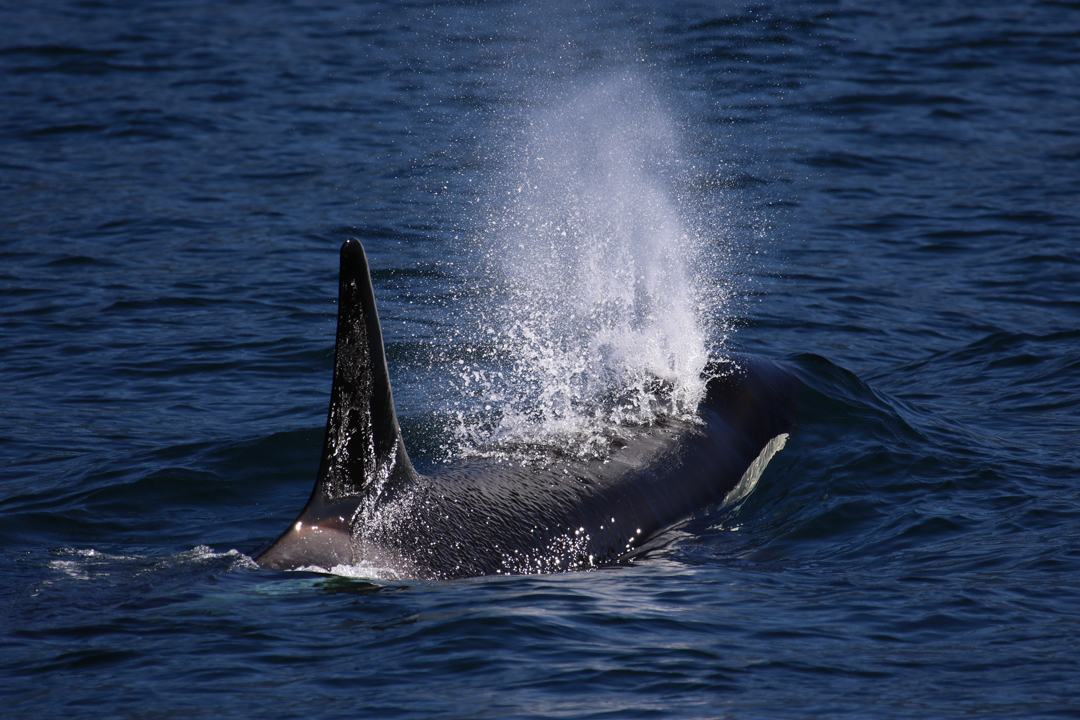 I spot the remaining whales a little further off slowly making their way west then making a turn to join the others into Blackney Pass. I sit back and begin to ponder as their calls continue to echo out of the cabin. What does it all mean? A question researchers have been pondering for over the last 40 years and 400,000 hours of recording later we know a darn sight more than we once did but our knowledge is still vastly incomplete. The A30s have only 13 catalogued calls and yet, we know them to be highly social, emotional and communicative. Imagine trying to live as a human with only 13 words at our disposal! Can we be so presumptuous as to think that a species so complex produce sounds that could be translated into words like food, sleep and hello? There is so much more going on – possibly more than we could ever “translate” – but so much more to learn, The more we learn; the more power we have to help protect them!

Thinking of the minuscule amount of time I have spent with A30’s legacy makes me feel not only exceedingly privileged; but insignificant. Insignificant in the best possible way. I am but a blip on their course through history, but they are so much more to me. Maybe it’s being surrounded by the grandeur of the mountains, or hearing their melodic calls beaming from under the surface, or watching their sleek, black bodies glide effortlessly through the dark water: It all firmly puts me back in my own body, and I know that this is the very spot I am meant to be in standing in. 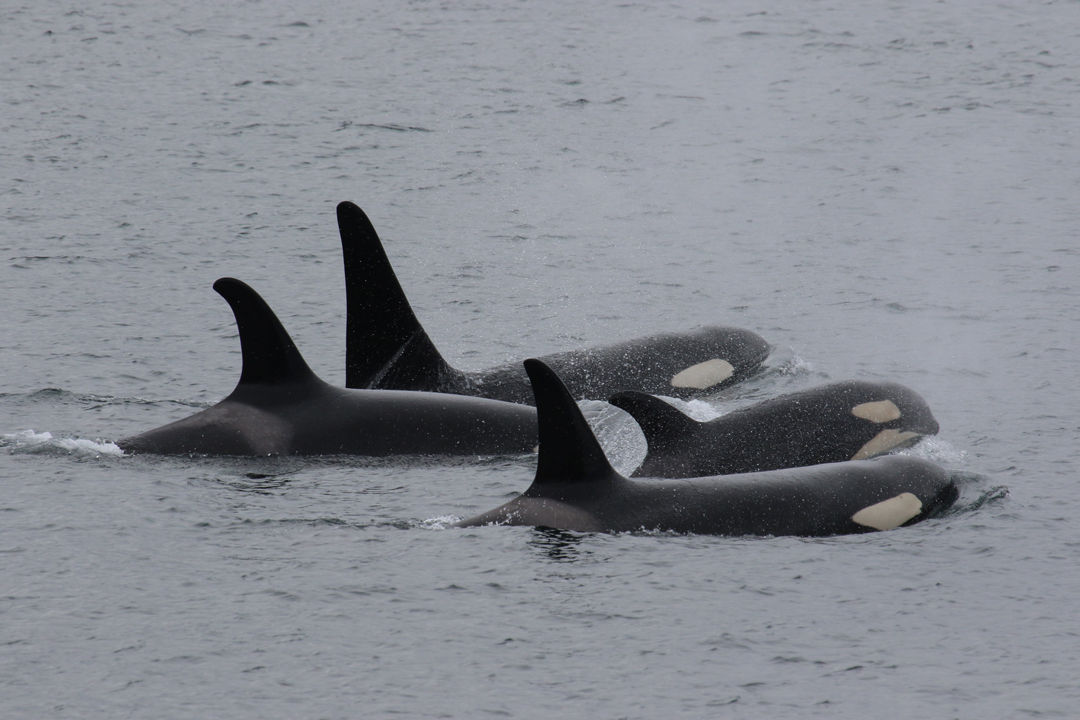 As the A30s disappear around the corner, heading north, I listen as the sound of their blows fades into the distance, then: silence. I tiptoe back into the cabin and turn on the stove to make coffee, as the sun starts peeking out from the misty evergreens. I chuckle at my luck, my privilege – and wonder what this new day will bring in my little slice of paradise!