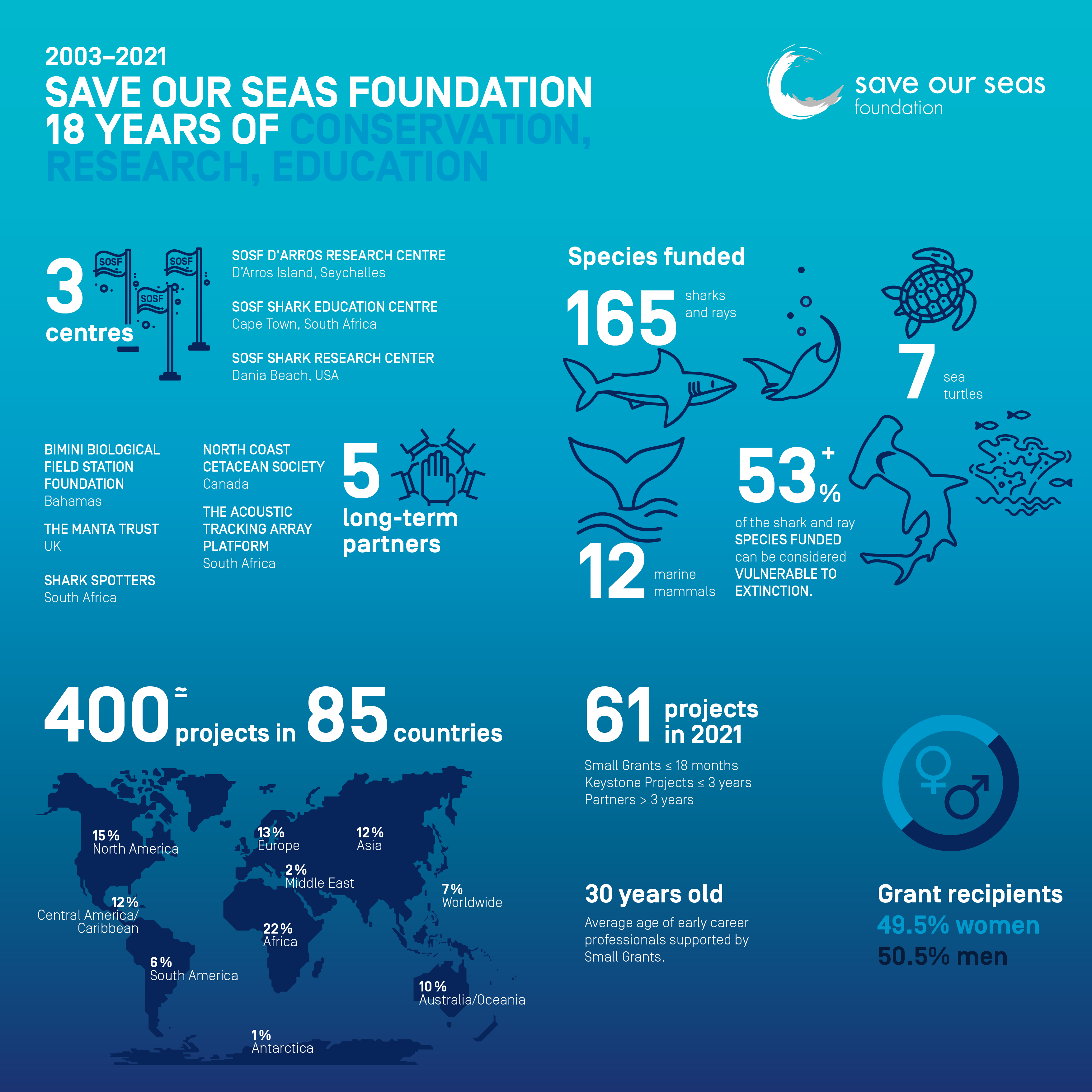 Since its inception in 2003, the Save Our Seas Foundation (SOSF) has supported nearly 400 projects on 165 marine species in over 85 countries, creating a community of more than 300 scientists, conservationists, students and educators who share its common objective. These project leaders have worked closely with fishing industries, businesses, divers and the public to enact positive change and raise awareness within communities.

The most important tool for successful conservation is knowledge. Scientific information is one of several important factors in environmental policy-making. The Save Our Seas Foundation is therefore proud to have supported numerous projects that have helped fill the gaps in our knowledge about sharks and rays, contributing to a better understanding of their conservation needs. Collectively, SOSF projects produce between 30 and 40 peer-reviewed scientific publications each year.

For instance, a global study by SOSF project leader Professor David Sims that was published in Nature in July 2019 identified how sharks and fishing boats interact across the world’s oceans, highlighting areas of high overfishing risk that will help target conservation efforts.

In addition, a team led by researchers at the Save Our Seas Shark Research Center have decoded the white shark genome. Its findings were published in Proceedings of the National Academy of Sciences in February 2019 and may lead to countless potential applications, ranging from conservation to medicine.

Between 2014 and 2017 the Save Our Seas Foundation focused its support on conservation strategies for Mobulidae (manta and devil rays), and since 2017 it has targeted projects on sawfish, wedgefish and guitarfish species, aiming to gather data and educate the world about these Critically Endangered families of fish. The SOSF’s tribe of sawfish researchers and advocates have a truly global distribution, with dedicated efforts taking place in Mexico, USA, West Africa, Madagascar, Indonesia, Australia and Papua New Guinea, while several projects have a global scope.
The real value of the foundation’s strategy and commitment to shark and ray conservation is reflected by recent successes in the listing of various species by the Convention on International Trade in Endangered Species of Wild Fauna and Flora (CITES), which restricts international trade in endangered species. In 2003 basking and whale sharks were the first and only sharks to be included in Appendix II of CITES. By 2016, however, the list of protected elasmobranchs had risen to 12 species of sharks and all the manta and devil rays, while all the sawfish species had been added to Appendix I. In 2019, 18 more species of sharks and rays, including wedgefishes and guitarfishes threatened by the scale of international trade in their fins and meat, were included in Appendix II. Combined, by the end of 2019 there were 14 shark, 10 wedgefish, six guitarfish, five sawfish, two manta ray and nine devil ray species listed under CITES.

In addition to facilitating research and informing policy, it is critical to raise general awareness of shark conservation issues through education and media and to engage communities and promote action to ensure that our oceans remain healthy for generations to come. To this end, the foundation has a multifaceted communication strategy with considerable outreach: the website www.saveourseas.com receives ~20k visits each month, while Facebook, Instagram and Twitter have over 145k, 200k and 140k followers respectively.

The Save Our Seas magazine bridges the gap between the innovative shark research being done by project leaders and the wider reach of their conservation messages to a public audience. With 10 issues published since 2014, this creative and stylish publication won silver and bronze awards in ‘Magazines Online’ and ‘Magazine Print Edition’ respectively at the 10th International Creative Media Award.

A dedicated education centre in South Africa welcomed almost 5,000 visitors in 2019 alone, half of which were children from local communities.

In 2021 the foundation celebrated its 18th anniversary, having matured into an established support and advocate of marine conservation on a global scale. Moving forward, the foundation strives to further develop its strategy and efforts to secure the health of our oceans, and the sharks and rays that live in them, for generations to come.