Transient orca are a unique ecotype or variant of the killer whale species. They belong to a population found only in the North-East Pacific and they are specialized predators, predating exclusively on marine mammals. It is believed that thousands of years of evolution combined with cultural separation from other killer whale ecotypes contributed to the differences we observe between transient’s and other orca populations that can be seen in the same habitats or coastal regions. This separation led not only to differences in dietary preferences, but also to slight differences in their morphology, social organization, and acoustic trends. As transient killer whales travel through the water column and along the coastal shelf of British Columbia in search of their next meal of a seal, sea lion, porpoise, or other marine mammals, they are often silent. Reserving vocalizations for social interactions and limiting the sound they are producing during a hunt. 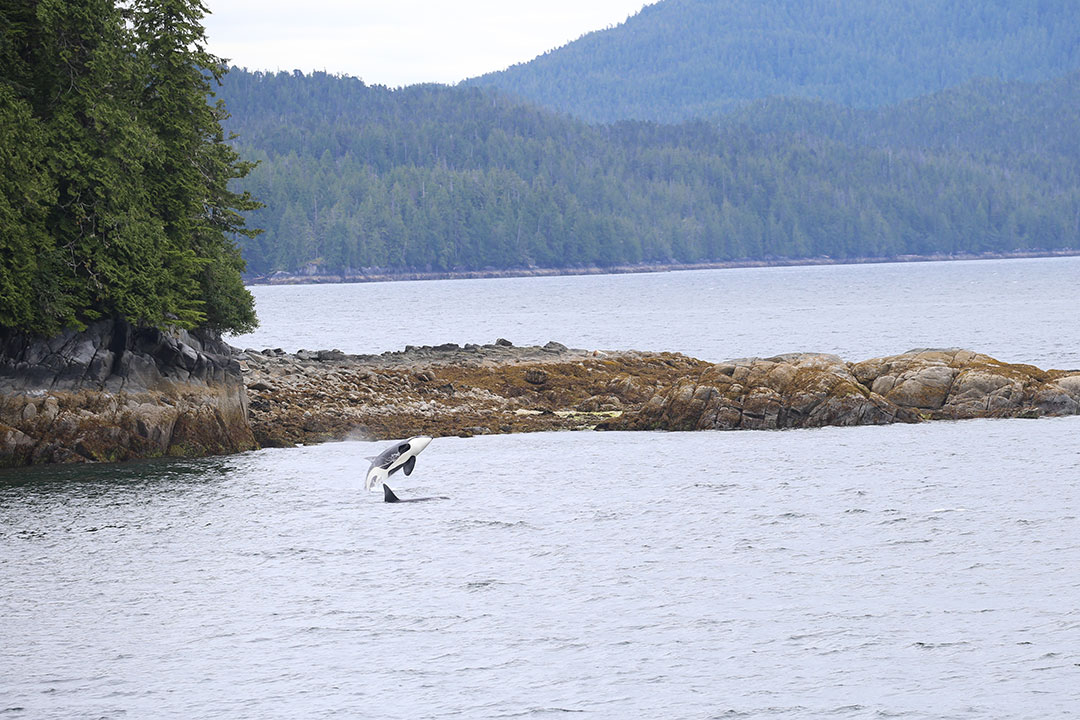 In knowing how stealth these orca can be and how fast they can travel, when they arrive we have to act quickly; we may only have a few fleeting moments to observe them from land. With this in mind, during a recent encounter, we took on our personal team roles as quickly as possible. Grace grabbed a handheld radio, some water, and took off on our trail to where our vessel the Elemiah was anchored. At the same time, Chenoah prioritized getting a drone in the air to gain a better understanding of the behaviour that was unfolding in front of the lab and Janie put full focus on obtaining the individual identifications of each whale with the use of an SLR camera. To everyone’s surprise, this group (identified as the T059s) did not continue to travel in any one direction. Instead, they remained 300 metres offshore right in front of our lab and alternated which individuals were at the surface and which remained at depth. This behaviour continued in roughly the same place for an hour, allowing our minds the time to wander and ponder what could be going on beneath the surface that our eyes were not privy to?

As Grace arrived with the Elemiah, she came to shore only to retrieve binoculars and backed off to observe the whales from a distance. With eyes watching this group’s behaviour from land, from the water, from an aerial perspective through the drone, and a hydrophone listening underwater, we remained focused and curious as to what these whales were doing. After another 30 minutes, all the whales began to travel towards shore and became incredibly surface active. Breaching, tail slapping, and spyhopping! Behaviours commonly observed following a successful hunt. Though we remained skeptical. In our combined experience, we could not recall any instances where transient’s hunted in a manner as relaxed as what we had observed. After a few more surfaces of the orca, Chenoahs drone footage revealed that indeed, they had made a successful kill. But the true beauty was being able to observe the intimate moments where food sharing occurred. Watching them pass pieces of their prey delicately from mouth to mouth is something that will linger in our hearts and in our data for many, many years to come.

As we reflect on this encounter, we have come to realize how much we would have missed had we not been able to observe their behaviour from 4 separate perspectives. Though particularly, without the use of the drone, we would not have been able to confirm that there had been a successful foraging event. This highlights for us that whenever possible, combining technologies and data collection techniques is critical in obtaining a well-rounded picture of what is occurring in the world of whales. This encounter was rejuvenating for the whole team and we are once again anxious to see which whales will make use of this productive habitat next.