Lost in the Moment

There are very few things in this world that can have me jumping out of bed before dawn. Yet I found my legs carrying my body forward and towards the door before my eyes had time to open or my mind could decipher why I was moving. As I reached out to grab the handle and slide the door open, a thunderous “WHOOOOOSH” of a whale exhaling mere metres from shore sounded. Still rubbing my eyes, I stepped out to see one, two, five, seven whales raising their flukes and descending to the depths. Janie and Chenoah were already outside, and the three of us paced the deck in our pyjamas, barely illuminated by the moon’s light, as we waited to see where the whales would appear next. Bubble net feeding calls exploded over the hydrophones less than a minute after the last humpback dove. 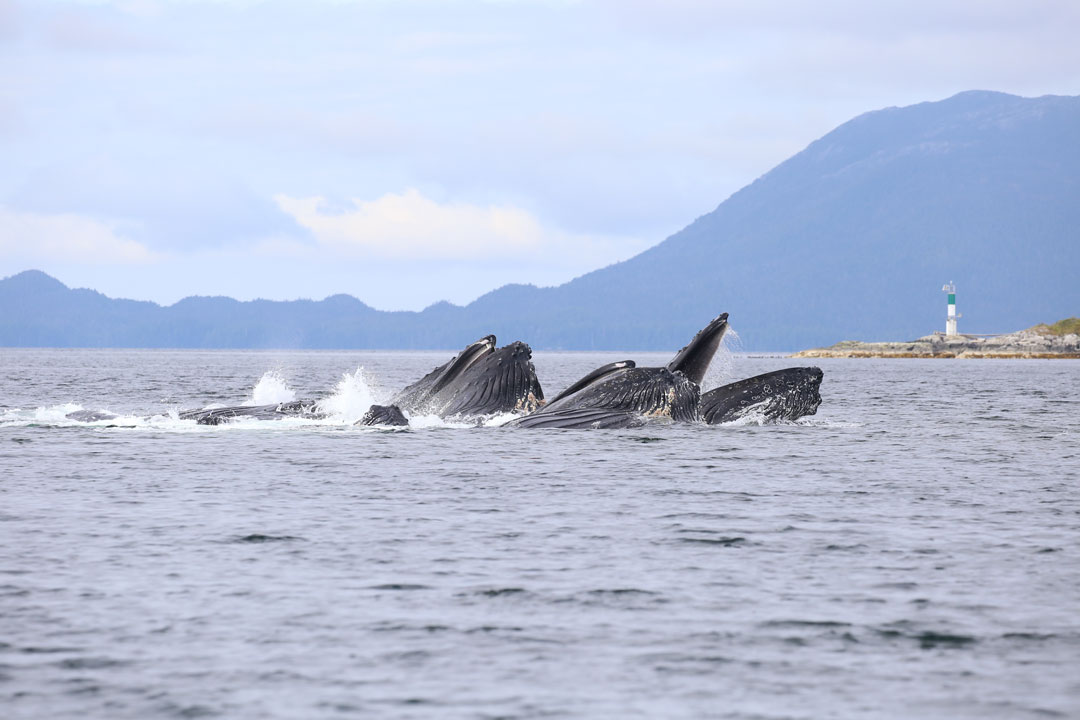 Bubble net feeding is an incredibly unique and specialised feeding strategy used by humpback whales only in specific parts of the world and only by certain individuals within those populations. In a typical scenario, groups of 2 to 15 whales will descend together and organise themselves into two main roles: callers and bubble blowers. The caller will remain below a school of fish and project a “bubble net feeding call”. This specialised call can vary in length but is used to force the schooling fish upwards and into the “bubble net”. While this is happening, the bubble blowers, as their name implies, will blow bubbles out of their blowholes while swimming in an upwards spiral. With each turn, the spiral tightens, and the bubbles create a net around the school, thereby preventing the fish from escaping the hungry mouths that follow. Then, in complete synchrony, all members of the feeding group will lunge through the net with their mouths agape and engulf the entrapped fish.

When we hear bubble net feeding calls, it is the only time we have a few seconds of warning that whales are about to surface. It has become instinct for my eyes to dart wildly back and forth, searching for a ring of bubbles in the water the second a call begins. If you can find the bubbles, you have found the whales. Sure enough, a ring formed at the surface. In unison, we all three exclaimed “BUBBLES!” and the group lunged as if in slow motion. Seven whales at the surface in front of the lab, slowly meandering North, swallowing the contents of their feed before preparing for the next. The group fed twice more within range of our cameras, and just as they began to raise their flukes and move on to their third, another whale – known to us as “Cheetah” (BCX0427) – rounded Keld Point and B-lined it towards the feeding group.

My heart stopped. If this whale joined the feeding group, what was to prevent another? And another? I had experienced bubble net feeding, but something inside me knew this was about to be different from anything I had ever seen. This time, I may finally witness a group of 10 or more whales working together to feed using one of the animal kingdom’s most extraordinary, powerful, and graceful strategies. At this point, the whales were lost from view, but their feeding calls continued to boom through Squally Channel, so we decided to get the boat. It seems simple, but this is approximately a 40-minute task and always a risk. By the time we paddle to our anchorage, retrieve our vessel, and head out on the water, the whales may change their course or stop feeding altogether. 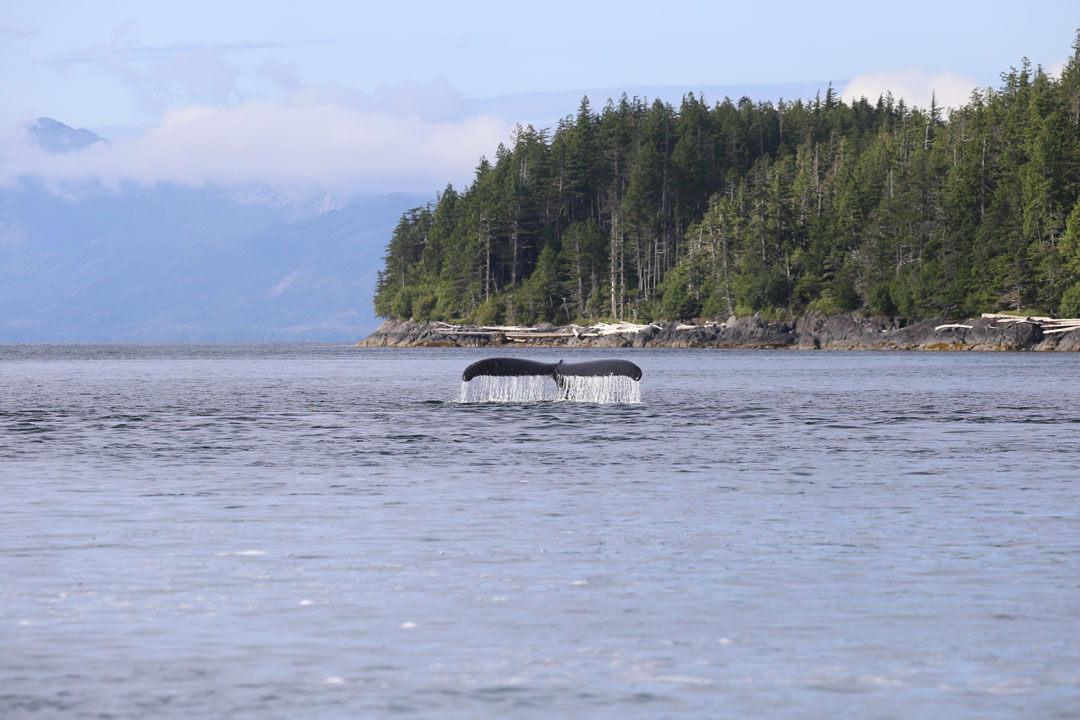 Anxiety built in my chest with every passing moment. Janie and I buzzed around the cabin, preparing everything we needed: cameras, layers, sunscreen, water, and a few cookies while Chenoah took on retrieving the Elemiah. As Chenoah called us on the VHF radio to let us know she was coming around the corner, I could feel the corners of my mouth turning up into a smile. The next thing I knew, Janie and I were waving to Chenoah, who stayed on shore with a drone prepared in case the whales circled back, and we headed off to search for the feeding group.

Looking for whales is an utterly immersive experience that requires you to use all of your senses and lend your undivided attention. However, a key sense we cannot rely on while travelling at speed is our sense of hearing. If a whale is not positioned in a way that their blow is visible against a nearby shore, and you cannot hear it, there is a potential to miss its presence. We had not yet seen any blows and decided to turn off the engine to listen to our surroundings. The payoff was almost instant – we heard a blow! A whale aptly nicknamed “Millhouse” was milling in the shallow waters of Curley Bay. As Millhouse began to fluke, Janie saw a tight cluster of blows in the distance, and we once again had eyes on the bubble netters. As we shifted our focus and slowly moved towards the large group, we couldn’t help but wonder why Millhouse (who is a known bubble net feeder) was not a part of the feeding group. What allowed Cheetah to join but prevented Millhouse? Were social dynamics at play? 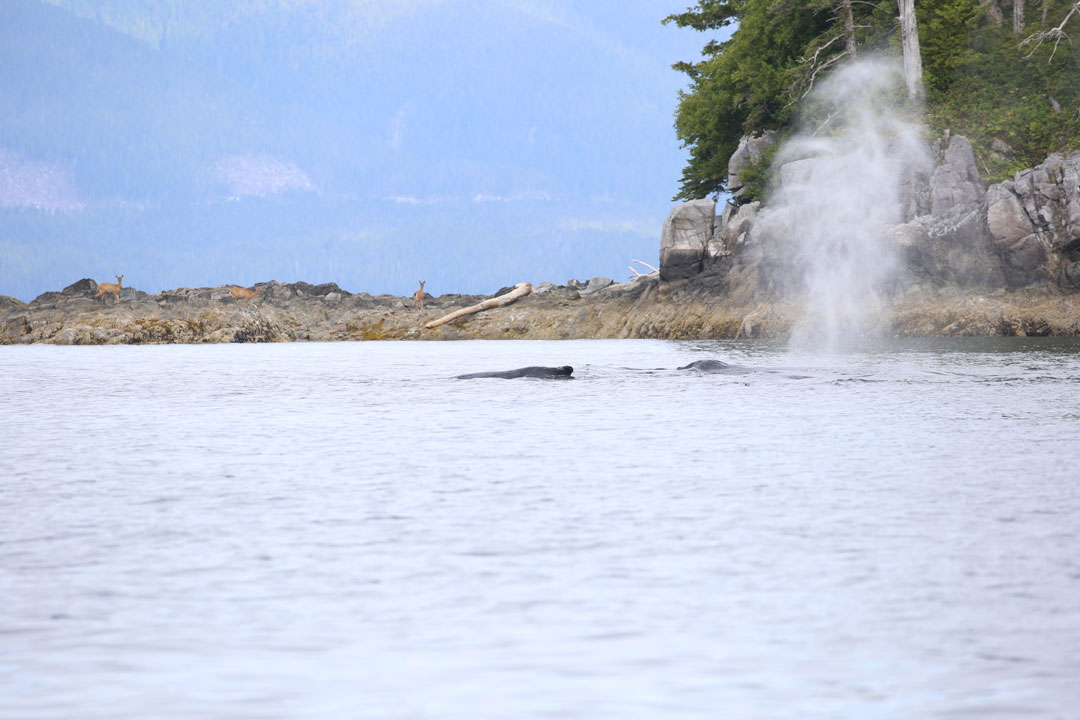 Upon approach, it was clear that the group size had grown. We arrived at the tail end of a feed and counted eleven whales! I stood in absolute awe on the bow. For better or worse, there wasn’t much time for getting lost in thought, and I was quickly snapped back to reality as Janie called Chenoah on the VHF radio to let her know that these whales were circling Fin Island. Thankfully the whales were in no rush to stop feeding and continued the bubble net feeding cycle more than 20 times before we approached Keld Point and came within view of the station and within drone range for Chenoah.

Before Chenoah was able to launch the drone, we noticed 3 deer standing near the water’s edge of Keld Point. This is not an uncommon occurrence, but what would follow shocked us all. The whales were approaching Keld Point following a feed but had been underwater for a few minutes. The deer seemed to notice our vessel but did not indicate that they were aware of the 11 humpback whales moving toward them. After what felt like an eternity, the whales began to surface. The first whale to come up surfaced mere meters from the shore, and the sound of its blow reverberated across the water. This startled the deer, and they responded by jumping into the water right in line with the whales’ travel direction! Quickly realising their mistake, the deer scrambled back onto shore and stood to watch while the seemingly unbothered humpbacks swam by them to continue their bubble net feeding journey. 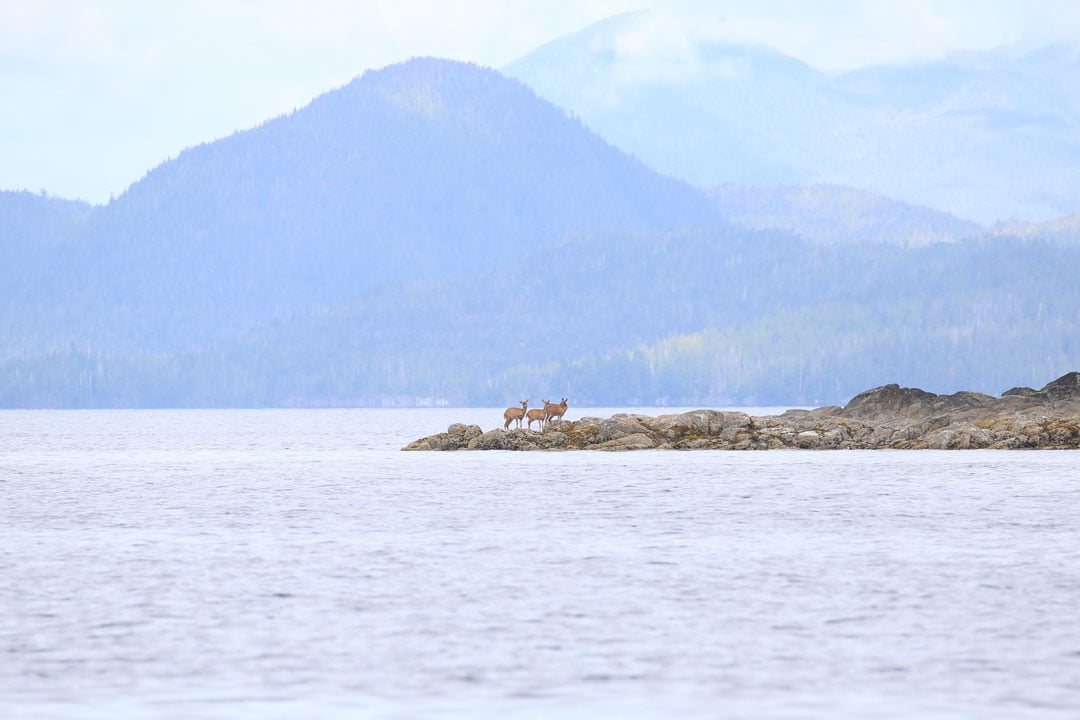 The whales eventually completed a full circle of Fin Island and continued to feed into the night. This day-long bubble net feeding event took place along a proposed LNG tanker route. One of the only places where humpback whales participate in bubble net feeding in the world. This is also one of the only places in the world where tankers are absent. I feel honoured to be in the presence of whales and bewildered at all the questions that have yet to be answered. I hope that we come together as one to protect these productive feeding habitats that support such unique behaviours so that we may continue putting the pieces together to uncover some of the mysteries that, for now, are lost in the deep.