Our journey to Fin Whale Research Station began on a 12-hour ferry from Port Hardy B.C, the ride up was rocky at best, with a wind strength approaching 40 knots. With all the cabins taken, we spent the night camped out at the bow of the ship. As the night progressed the swells that rocked the boat became too intense for most of the passengers. A young couple seated behind us struggled to console their newborn as he battled through his first experience of seasickness. Around midnight, we exited the open waters and were greeted with the calm and protected Inside Passage, signalling we were getting close to our destination. We would be arriving in the First Nations community of Klemtu around 5 am. We had our research vessel towed onto the ferry as crossing the open sea in our small boat was not a good idea with these early spring storms. 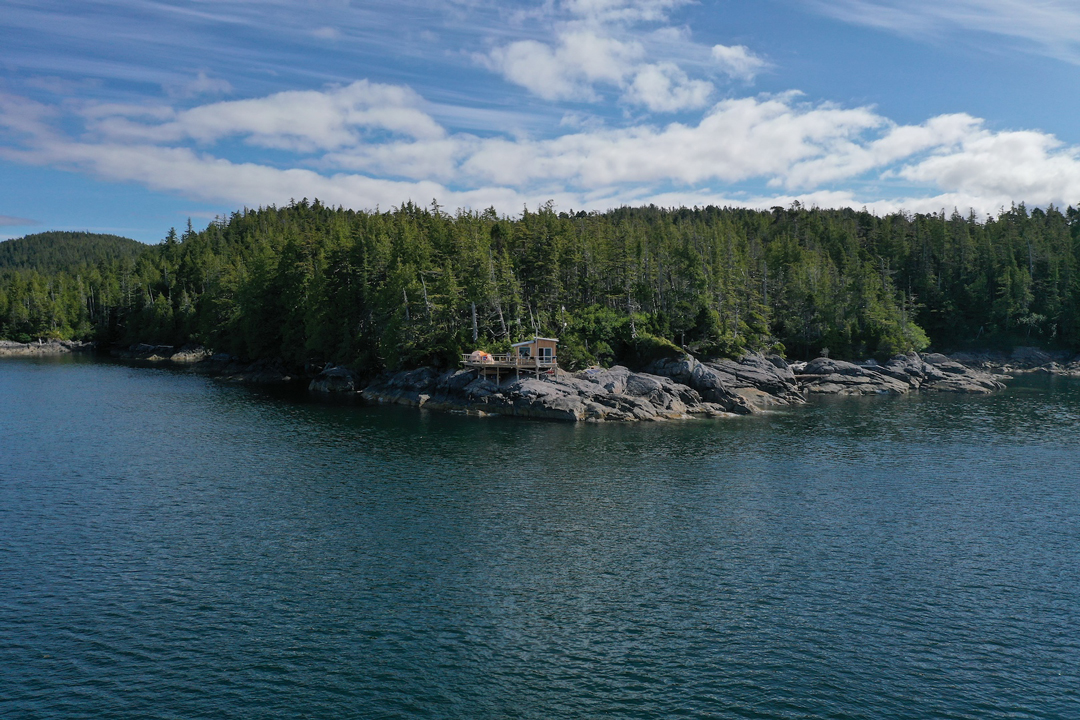 Upon arrival in Klemtu, we received a call from the person who was scheduled to assist us in launching our research vessel, the Elemiah. The message was clear; he was going to be a no show! We needed to arrive at Fin Island that afternoon, which would take another 5 hours in our boat through the deep fjords of the north coast. We quickly began to explore other options. The people and community of Klemtu were incredibly kind and welcoming. We approached everyone with a truck departing the ferry to see if they could help us out. Finally, luck was on our side and we were put in contact with the manager of the Spirit Bear Lodge. Not only did he help us launch the boat, but he also filled our cups with fresh coffee, a welcome sight as we were all tired from the sleepless rocky night. By 9 am we were finally on our way, the water was flat calm, the path ahead was an emerald sea squeezed between high cliffs. Our breath was visible in the cold air, but we did not mind the chill, the warmth of excitement filled our minds as we scanned for whales on route to start up the 2019 field season of whale research within the Great Bear Region. 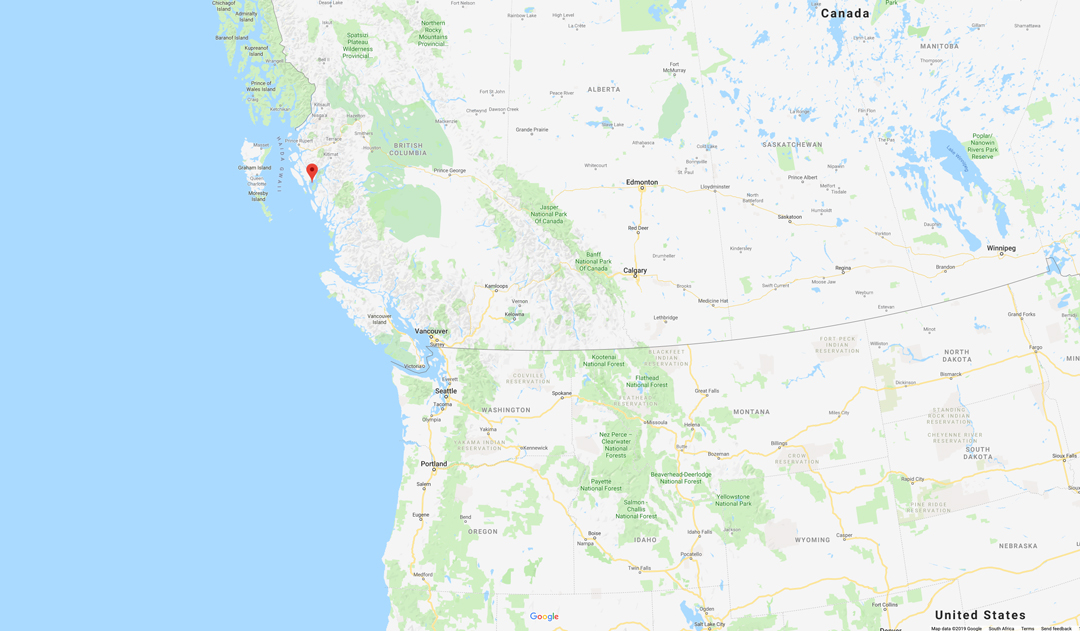 We arrived at the station later than expected, with Ben and Eric standing on the deck anxiously waiting to hear our voices over the radio. Both are postdocs working on their own projects for BC Whales from Fin. The next days we worked on the cabin, made lists of what needed to be fixed and set up a plan for the next few weeks. Three of the 4 hydrophones had been destroyed during the winter due to extremely high tides and nasty winter conditions. We had divers arriving from Hartley Bay, as well Tom Dakin, the hydrophone genius of this coast all within a few days. My biggest concern was how were we ever going to fit all these people into this 16 x 16 cabin!! We decided on tent platforms, as well as using the huge deck for one large tent to store all excess supplies. Even our water catching system had been destroyed, and we knew we had to ensure people could safely drink as well eat. This place is so remote, no roads, no running water (except from the sky), no cell, no internet, just an open ocean filled with the sounds of whales, which is why we are here and worth the hardships that would lie ahead. Once everyone else arrived, we worked from sunrise to sunset, which up here is from 5 am until 11 pm. The long days enabled us to complete the entire setup, including a layer of beautiful red cedar siding around the cabin, an extension of the deck for proper whale scans, and finally satellite internet which allows us to share with you the daily sightings of whales that are just beginning to arrive. Over the hydrophones we are already hearing the excitement calls of orca families as they follow the chinook salmon, the lone melancholy call of the humpback whale, sounds of blows fill the air, our local eagle pair are perched among the trees behind the station, chubby seals glide by. All of this in a moment reminds us why we are here. The season begins, and we are ready! 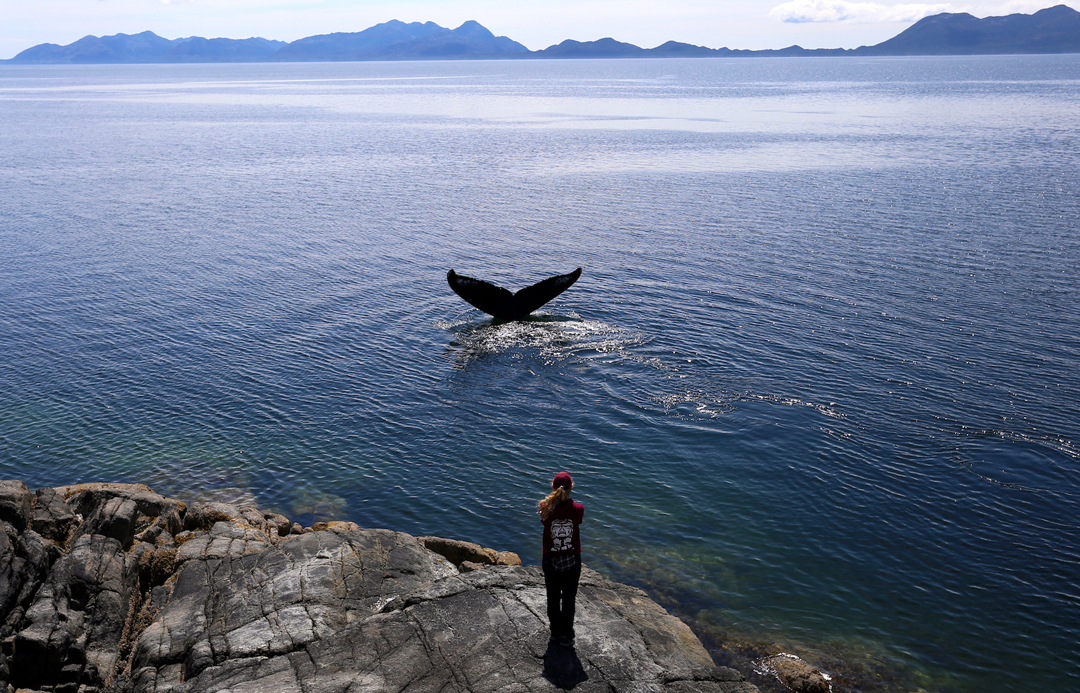 A humpback whale close to the shore at Fin Island. Photo © Janie Wray