To protect life in our oceans, especially sharks and rays, the Save Our Seas Foundation has expanded its support of global marine research, conservation and education initiatives. This year, we are funding 20 new Small Grant projects aimed at generating critical knowledge on marine species and their habitats.

Aimed at original and innovative start-up projects, these $5,000 grants have been awarded to early-career scientists, conservationists and educators working on short, specific and finite projects (some are a small component of a larger endeavour). 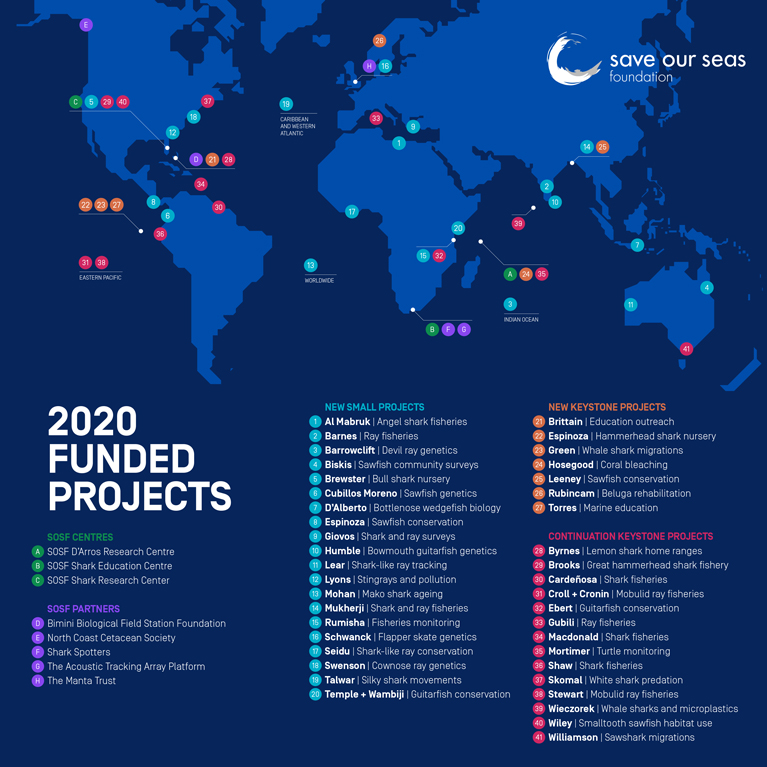 Sara Al Mabruk and her team are surveying the major fish markets along Libya’s coast, a stretch that she suspects represents one of the last hotspots for angel sharks in the Mediterranean.

Alissa Barnes is visiting the sites where sharks and rays are caught along the Maharashtra and Gujarat coast in western India and the Orissa coast in the east to gather crucial baseline information that will help to regulate India’s active and influential shark and ray fisheries.

Ellen Barrowclift-Mahon is coordinating the collection of tissue samples from devil rays at key landing and market sites from different countries around the Indian Ocean, helping to define how their populations are structured across a wide ocean space.

Veronika Biskis is giving old sawfish trophies a new lease on life by constructing 25 educational cases. In doing so, she is hoping to transform these rostra from sawfishes of the past into a symbol of hope and caution that connects communities to the conservation of sawfishes in northern Australia.

Lauran Brewster is attaching accelerometers to juvenile bull sharks in the Indian River Lagoon in Florida, USA. This will help her monitor their body movement and behaviour in response to harmful algal blooms (HABs) in an important nursery area for these sharks.

Juan Cubillos Moreno is collecting environmental DNA (eDNA) samples from the estuaries and mangroves of Colombia’s Chocó region. He is uncovering the presence and distribution of largetooth sawfishes on the Colombian Pacific coast by detecting traces of their DNA left behind as signatures in their environment.

Brooke D’Alberto will be investigating the biology of two populations of the Critically Endangered bottlenose wedgefish: one from South-East Asia (Singapore, Indonesia and Malaysia) and the other from northern Australia.

Ioannis Giovos is using a combination of local knowledge, BRUVs and scuba surveys to search for key aggregation areas and essential habitats for the sharks and rays of Kos Island in the South Aegean Sea.

Emily Humble is helping to develop a species-specific management plan to support the protection of the Critically Endangered bowmouth guitarfish in Sri Lanka.

By trawling the fish markets and landing sites of Ghana’s coastline, Issah Seidu is surveying the patterns in catch composition over time for sharks and rays in artisanal fisheries.

Karissa Lear is using acoustic telemetry to track wedgefishes and the giant guitarfish to fill in the gaps on where these species move and how deep they swim in the Pilbara region of Western Australia.

Kady Lyons wants to know how the bacteria and viruses – the microbiome communities – that live in the bodies of all animals may be influenced by pollution and what role that might play in evaluating the health of stingrays (and other sharks and rays) that often swim in contaminated waters.

John Mohan is investigating the chemistry of shortfin mako vertebrae samples to attempt to validate age patterns in all ocean basins. This, he hopes, will support fisheries management and adequate conservation of an Endangered and CITES-listed shark.

Sushmita Mukherji is working closely with fishers along the coast of West Bengal, from the border with Bangladesh to the mangroves of the Sundarbans, to collect information that will help her understand the catch composition of sharks and rays at fish landing sites.

Cyrus Rumisha is using DNA barcoding to record which shark species are landed and processed in Tanzania’s fisheries and to improve the taxonomic resolution of finned and processed shark products from the country.

Tanja Schwanck is learning where the flapper skate moves along the last vestiges of its home range on the Scottish west coast and trying to understand how this affects its genetic diversity.

John Swenson is developing a set of targeted ‘capture panels’ that focus DNA sequencing efforts on specific regions of the cownose ray genome that can be used to identify related individuals.

Brendan Talwar is satellite-tagging silky sharks across the western central Atlantic, Gulf of Mexico and Caribbean to understand where these sharks are swimming to support silky shark management and recovery across the region.

The halavi guitarfish belongs to one of the ocean’s most vulnerable groups of fishes, the shark-like rays in the family Rhinobatidae (dubbed the ‘rhino rays’). Nina and Andrew are looking into the life history of the halavi guitarfish, acquiring information to help better manage a Critically Endangered species that is targeted for its meat and fins, locally and internationally.