To protect life in our oceans, especially sharks and rays, the Save Our Seas Foundation has expanded its support of global marine research, conservation and education initiatives. In 2017, we have funded 18 new projects aimed at generating critical knowledge on marine species and their habitats. Explore these innovative collaborations below: 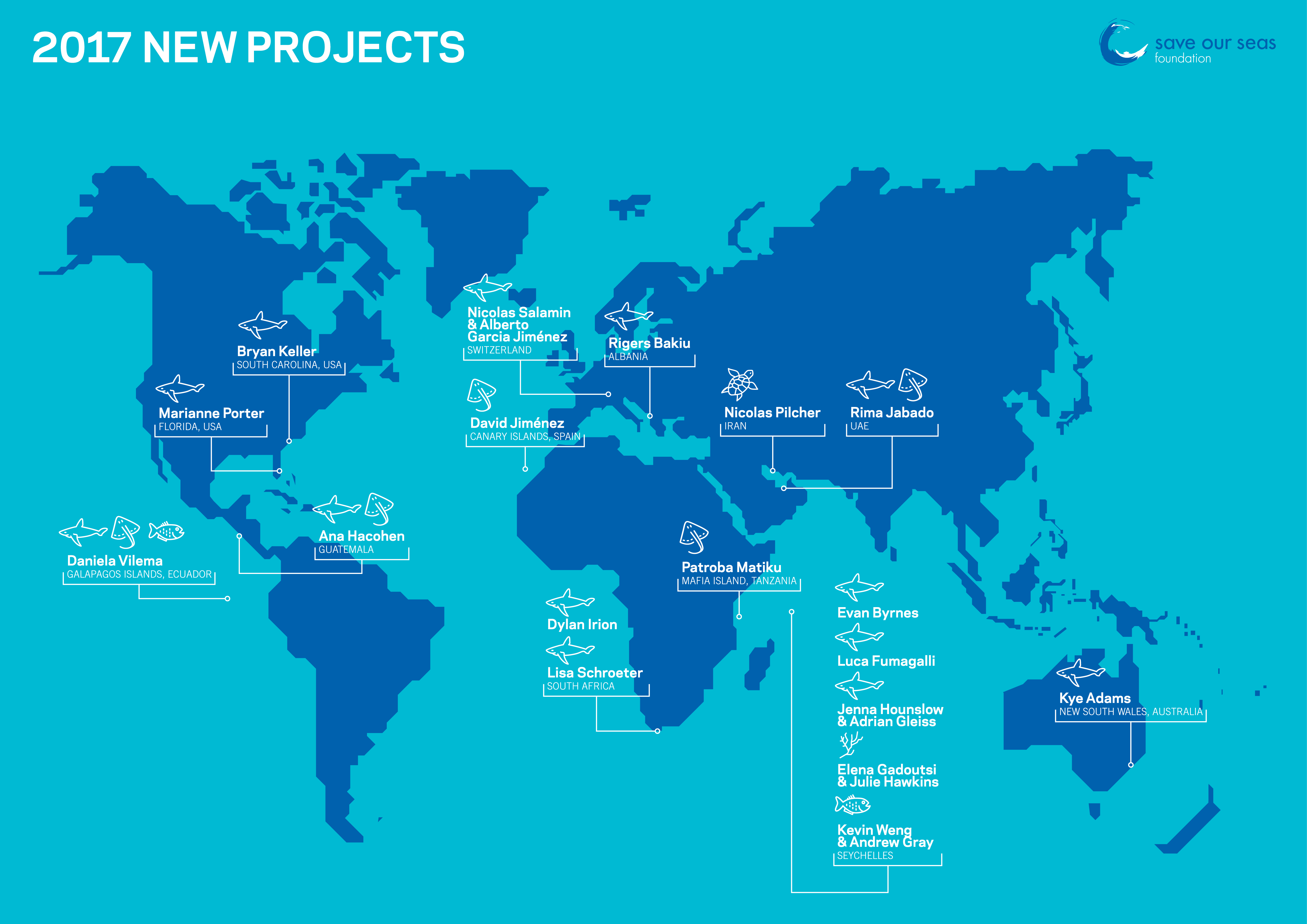 Kye Adams is looking into a sustainable solution for protecting water-users: a blimp that spots sharks from the air.

Riger Bakiu will collect catch data from fishers and aquaculture workers in Albania and encourage authorities to protect these vulnerable species.

Elena Gadoutsis will investigate the impact of rising sea temperatures on coral reefs.

In Guatemala, the demand for shark products is high. Ana Hacohen will use DNA testing to find out which elasmobranchs are being consumed and how often.

Jenna Hounslow will use accelerometer tags (technologically similar to activity trackers such as fitbits) to measure sicklefin lemon shark behaviour in three-dimensions.

Dylan Irion aims to bring together several photo-ID datasets in a massive collaboration of white shark researchers throughout South Africa.

Rima Jabado produced the first report on the conservation status of sharks, rays and chimeras in the Arabian Sea and its adjacent waters.

David Jiménez will work with citizen scientists to expand our knowledge about the spiny butterfly ray in the Canary Islands.

Bryan Keller will explore the possibility that some species of sharks use the earth’s geomagnetic field as a massive global compass to return to the same place each year.

Nicolas Pilcher is studying the gender of sea turtles in the Arabian Gulf, where temperatures are already so extreme that they mimic what many parts of the world are predicted to look like in the future.

Marianne Porter aims to examine the movement ecology of thousands of blacktip sharks that migrate along the coast of South Florida every year.

Lisa Schroeter is enlisting the help of the local diving community to learn more about South African catsharks and how to protect them.

Daniela Vilema will continue their work to conserve the sharks of the Galápagos by encouraging local communities to protect these wonderful species through a marine ambassador’s education programme.

Kevin Weng & Andrew Gray will investigate if D’Arros and St. Joseph could be a refuge for the endangered humphead wrasse in Seychelles.

Luca Fumagalli will try to find DNA traces that animals leave in their environment (skin, scales, mucus, etc) to detect their presence in and around St Joseph Atoll.