I was raised in Grand Haven, Michigan, and Fort Worth, Texas, far from any saltwater, but I developed a love for the marine environment during family vacations to Florida. I caught my first shark, a small blacktip, while fishing with my dad when I was about seven years old. From that moment on I was ‘hooked’ and wanted to spend every possible moment on or in the water. I was so captivated by what I was seeing in the Gulf of Mexico that I did numerous school reports and projects on marine life, I read countless books and watched all... 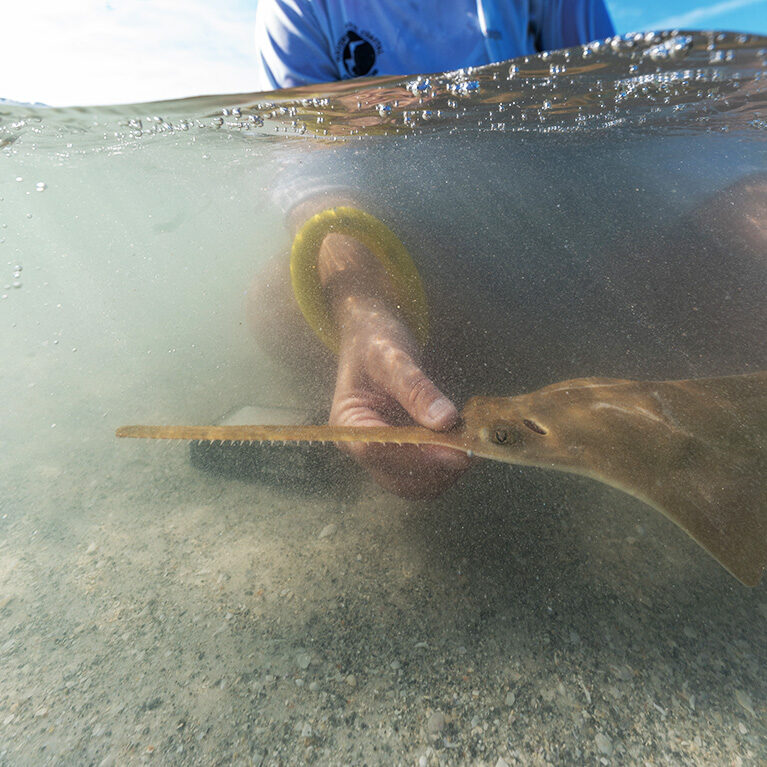 First Sawfish Tagged in Tampa Bay!
I saw the email first thing Friday morning; a sawfish had been sighted in the Tampa Bay area.  A man walking the beach in Redington Shores the day before had filmed a small sawfish swimming in the shallow surf zone.  Thanks to all the outreach… 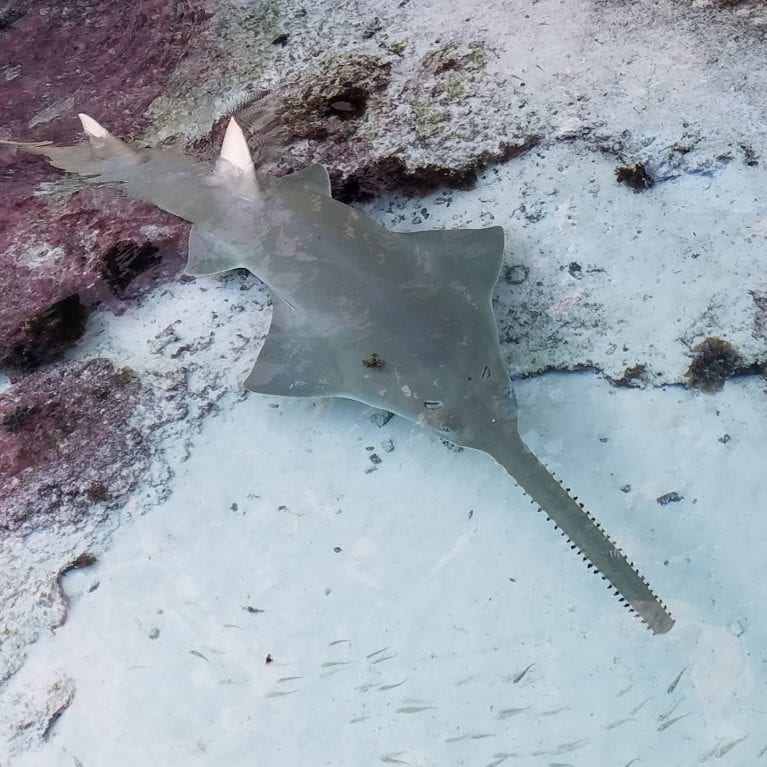 Using Water Samples for Sawfish Research
Environmental DNA (eDNA) research is more than simply taking water samples and magically finding out if your target species was detected. Being sure your team is using the latest, most sensitive methods and taking steps to avoid false negatives (for example, if you don’t filter… 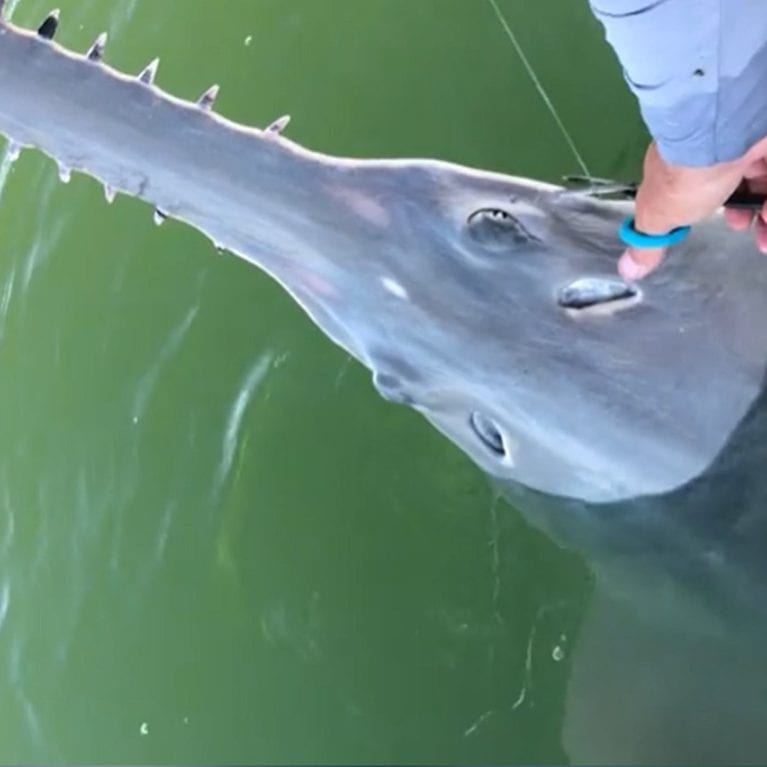 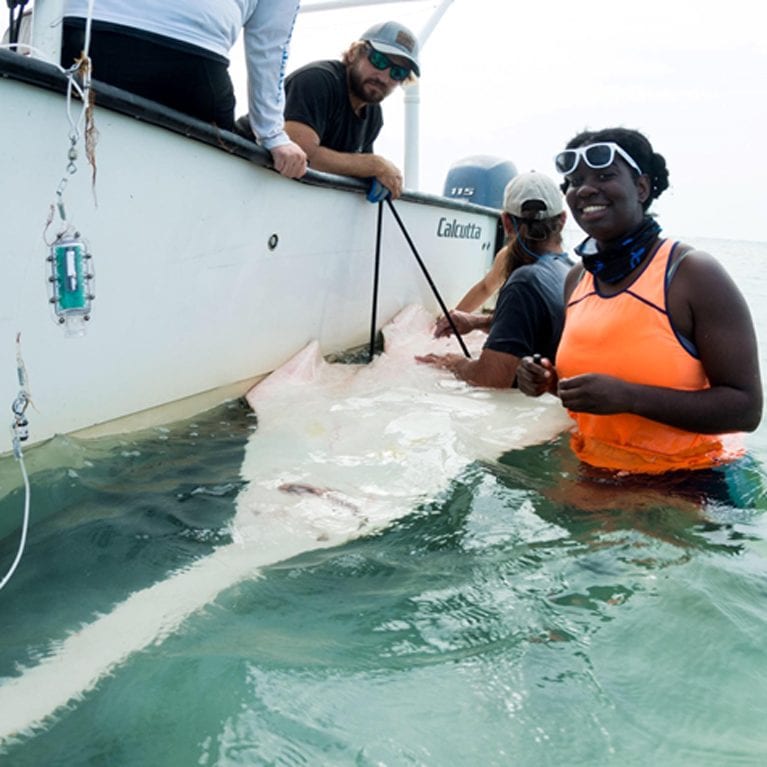 One sawfish’s journey
A Dubious Detection As part of an ongoing collaborative research project, scientists have been tracking the movements of smalltooth sawfish using passive acoustic telemetry. As the name may suggest, instead of actively following a sawfish around, data are collected using stationary receivers whenever the sawfish… 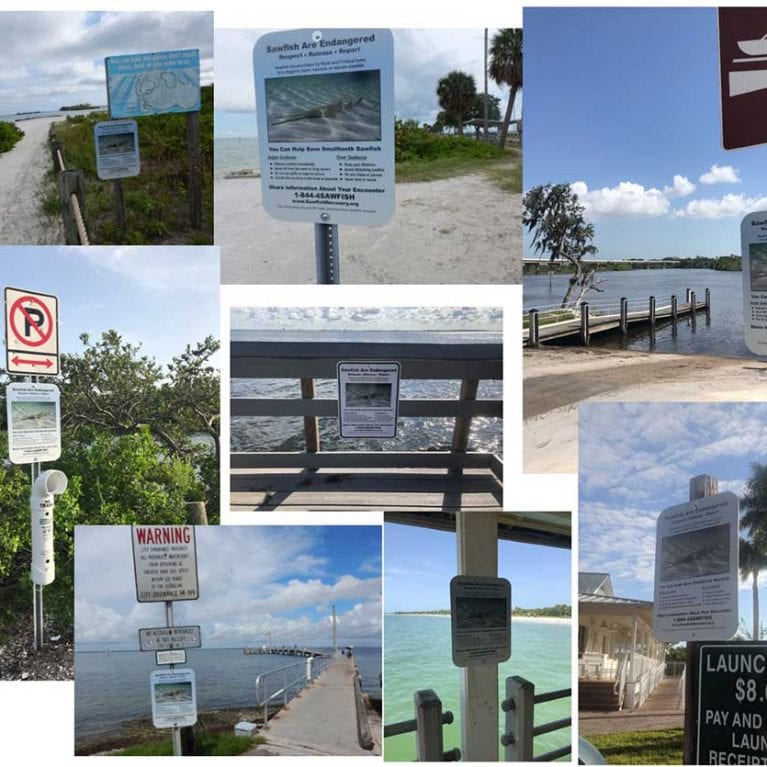 Coming soon to a fishing pier, boat ramp, or marina near you
Public outreach is a crucial component of our project that’s investigating the use of Tampa Bay by smalltooth sawfish.  Outreach and education are necessary to effectively educate the public about endangered smalltooth sawfish, discourage illegal practices, and promote the conservation of the species.  Outreach allows… 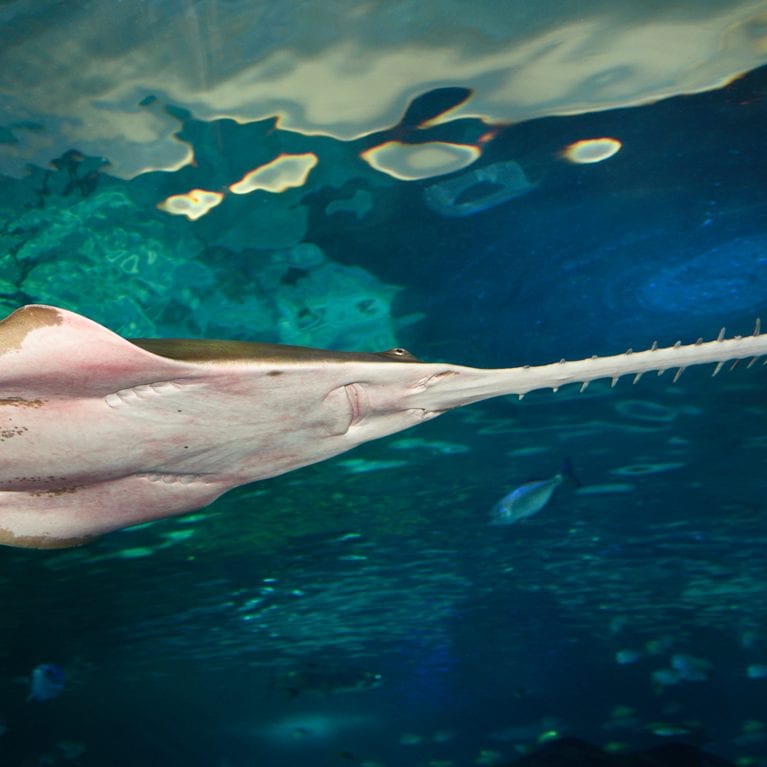 A behind the scenes look at what it takes to start a field project
Smalltooth sawfish (Pristis pectinata) were once plentiful in the United States from Texas to North Carolina but overfishing and habitat loss during the 20th century led to dramatic declines in sawfish numbers and range. Today, this species is found almost exclusively in South Florida. Following…
Project details

Investigating the use of Tampa Bay by Endangered smalltooth sawfish

Collect crucial information about smalltooth sawfish in the greater Tampa Bay area to monitor the population as it recovers and expands northward, develop recommendations for management and protection strategies to assist in the recovery of the species, and educate the public about their role in the conservation of the species.

Smalltooth sawfish were once plentiful from Texas to North Carolina but overfishing and habitat loss during the 20th century led to dramatic declines in sawfish numbers and range. Today, this species is found almost exclusively in south Florida.  Following the 2003 listing of the U.S. population under the Endangered Species Act, concerted research and recovery efforts began. Studies suggest the population is at least stable, indicating current management strategies have been successful in stopping the decline and may be improving the status of the species. Tampa Bay is expected to be the next region along the Florida Gulf of Mexico coast into which the population of protected smalltooth sawfish will expand north to (from Charlotte Harbor) as the population recovers. Recent public reports of captures and sightings of sawfish in Tampa bay and research-tagged sawfish occurring in the area highlight the need to begin this work in the region.

Of the chondrichthyans, sawfishes (Pristidae) are the most threatened with extinction.  Historically, the Critically Endangered smalltooth sawfish Pristis pectinata was found in the eastern Atlantic along the west coast of Africa from Angola to Mauritania and in the western Atlantic from the mid-Atlantic states of the U.S. to Uruguay, including the Gulf of Mexico. Smalltooth sawfish populations have significantly declined and the species is now found in less than 20% of its former range worldwide. Because of largely unintentional overfishing, the range in the U.S. has been reduced to primarily southwestern Florida. Given the sharp decline, the smalltooth sawfish was listed as an endangered species under the United States Endangered Species Act in 2003. Based on contemporary datasets the current U.S. population of smalltooth sawfish is at least stable throughout its core range, southwest Florida from Charlotte Harbor to Florida Bay, with the potential for this core area of abundance to be expanding. The Smalltooth Sawfish Recovery Implementation Team recently decided that future research efforts should be expanded to include randomized sampling in areas outside of the core area such Tampa Bay and Indian River Lagoon, the next areas into which the species is expected as the range expands. Therefore, this project will investigate the historic and current populations of smalltooth sawfish in the greater Tampa Bay region of the Florida Gulf of Mexico coast. Recent public reports of captures and sightings of sawfish in Tampa bay and research-tagged sawfish occurring in the area highlight the need to begin this work in the region. This project will use public encounter information, field surveys, and acoustic monitoring to investigate the occurrence, habitat use, and movements of smalltooth sawfish in area. The field sampling will occur in the greater Tampa Bay region of the Florida Gulf coast (Sarasota, Manatee, Hillsborough, Pinellas, Hernando, and Pasco counties). Field sampling will occur year-round using both random and directed sets of gill net, longline, drum (set) line, cast net, and rod and reel. Random sets will occur on a regular basis as funding allows and directed sets will be used to follow-up on specific information about a sawfish occurrence (for example from a public encounter report, or from acoustic or satellite tracking information).  Capture sawfish will be implanted with a 10-year acoustic transmitter for long-term tracking. Acoustic receivers will be strategically placed around Tampa Bay (where there currently aren’t any receivers) initially to determine where and when sawfish are occurring in Tampa Bay. Tagged sawfish will also be tracked via receivers in the iTAG (the Integrated Animal Tracking in the Gulf of Mexico network) and OTN (the Ocean Tracking Network) networks and shared by participating colleagues. The goal of this project is to collect scientific information on the relative abundance, spatial and temporal distribution, movements and habitat use, and biology of smalltooth sawfish in Tampa Bay to improve our overall understanding of the population. We will work in cooperation with NOAA Fisheries and Florida Fish and Wildlife Conservation Commission, the permitting agencies, to ensure field sampling is conducted under all appropriate permits.  We will coordinate with other research partners and fellow members of the U.S. Smalltooth Sawfish Recovery Implementation Team to ensure research output is appropriate and consistent while minimizing duplicative efforts and to ensure research outcomes specifically address recovery goals and objectives of the Smalltooth Sawfish Recovery Plan.