As part of an ongoing collaborative research project, scientists have been tracking the movements of smalltooth sawfish using passive acoustic telemetry. As the name may suggest, instead of actively following a sawfish around, data are collected using stationary receivers whenever the sawfish swims by. This technique allows for less labour-intensive and more long-term tracking, but the trade-off is that scientists don’t know if a sawfish has passed a station until the receiver has been recovered and downloaded. This makes downloading receivers a highly anticipated event.

In October 2019, Tonya Wiley (Havenworth Coastal Conservation) and Dr Jayne Gardiner (New College of Florida) spent several days in the field downloading their receivers in the greater Tampa Bay area for their projects studying sawfish and sharks, respectively. The gruelling work was made worth it when a sawfish detection was recovered on one of the sawfish project receivers in lower Tampa Bay. The excitement was quickly dampened, however, by the fact that it was only a single detection. Scientists are typically wary of single detections as they could be erroneous and due to mechanical error in the receiver, not from the presence of a tagged animal. However, detection of sawfish in Tampa Bay is not outside the realm of possibilities. To determine whether this detection should be considered valid or erroneous, we had to examine what we know about sawfish in Tampa Bay as well as what we know about this tagged sawfish in particular. 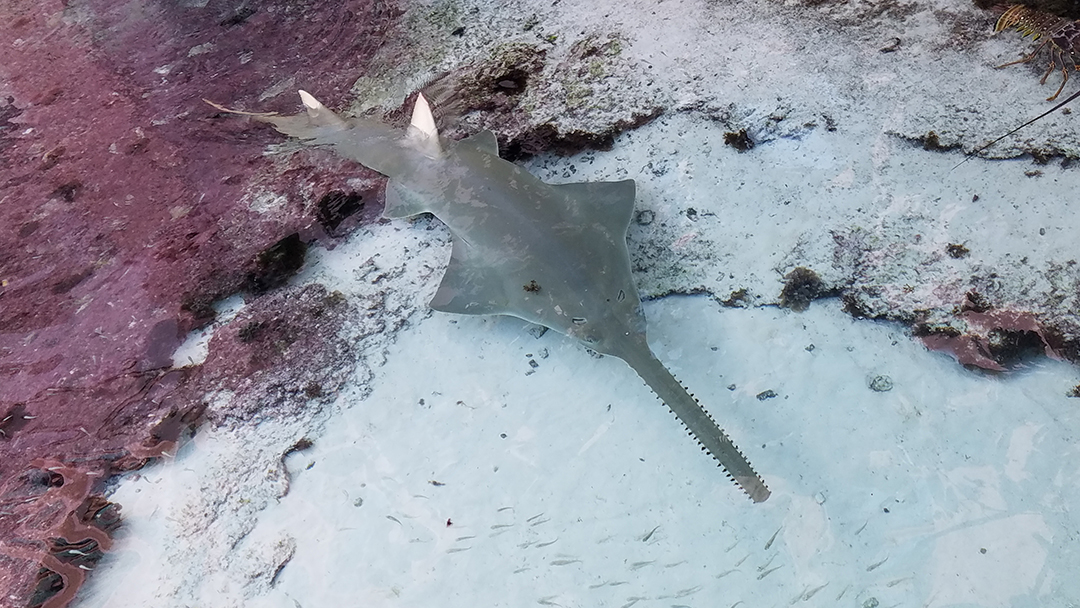 The questionable detection was attributed to a female sawfish that was tagged on April 11th, 2017 in the lower Florida Keys. When she was tagged, she was 364cm (11ft) in length, which means she was likely just starting to mature. She was first detected a few weeks later April 27th, 2017 and was still in the Keys, where she likely remained until May. She was last detected in the Keys on May 6th, 2017 and then appeared to move north where she was detected in the Caloosahatchee River on May 12th, 2017. She was detected with regularity in the Charlotte Harbor area for about a week.  While there aren’t many detections from her for the next few months, it appears she may have ventured further north as she was detected near Venice Beach on July 23rd, 2017 and then Tampa Bay on October 3rd, 2017. Another detection in the Charlotte Harbor area on October 10th, 2017 suggests she began moving south again in early October. By November, she had returned to the Keys and was detected somewhat regularly from November 7th, 2017 through March 28th, 2019 in the Keys, except for a two-day period July 12th-13th, 2018 where she ventured into the coastal waters of Everglades National Park.

Currently, there are no data available regarding her whereabouts from March 28th, 2019 until the detection in question in Tampa Bay, which occurred September 17th, 2019, although there could be some detections along the Gulf coast on receivers that haven’t yet been downloaded. Due to the gap between detections, we had to look at the previous behaviour of this sawfish. In the fall of 2017, she was detected in Tampa Bay, so it is not unreasonable that she may have returned in fall of 2019. The fact that she didn’t return to Tampa Bay in 2018 could be explained by sawfish biology. Researchers hypothesize that sawfish may reproduce biennially (only every other year), so an alternating pattern of movements between years based on whether the female is or isn’t mating makes biological sense. Particularly since it was known at the time of capture in 2017 that she was at the cusp of maturity, and it is highly likely she would be mating the following year. 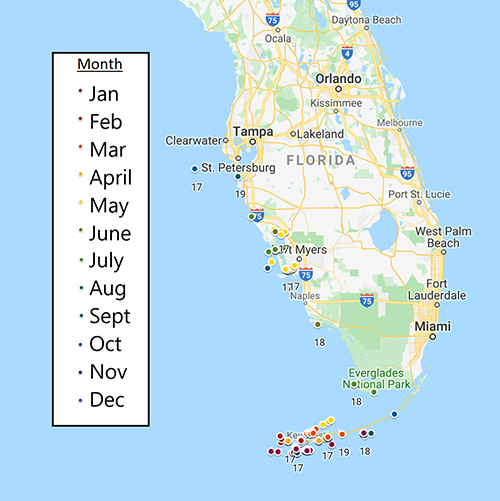 Not only that, but she also isn’t the only sawfish to spend time in Tampa Bay! In total, five sawfish have been detected in Tampa Bay including two other females. In addition, in the summer of 2019, a couple of sawfish were caught in permitted turtle relocator trawls during dredging in the Tampa Bay ship channel. All in all, while single detections should be taken with a grain of salt, these data suggest that a fall visit to the Tampa Bay area is in-line with this individual’s behaviour and reasonable given what we know about sawfish.  The receivers are still in the water listening for tagged sawfish which swim near them.  Wiley plans to add more receivers in 2020 in hopes of getting a better understanding of the use of the Tampa Bay area by these endangered rays. 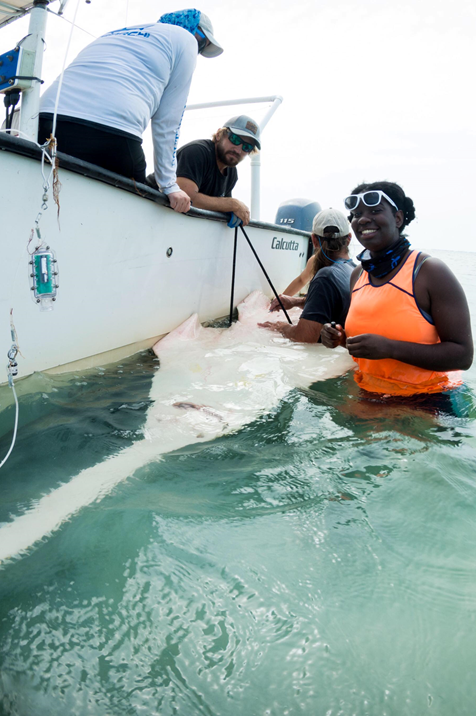