Smalltooth sawfish (Pristis pectinata) were once plentiful in the United States from Texas to North Carolina but overfishing and habitat loss during the 20th century led to dramatic declines in sawfish numbers and range. Today, this species is found almost exclusively in South Florida. Following the 2003 listing of the U.S. population under the Endangered Species Act, concerted research and recovery efforts began. These studies now suggest the population is at least stable, indicating current management strategies have been successful in stopping the decline and maybe improving the status of the species. Tampa Bay is expected to be the next region along the Florida Gulf of Mexico coast into which the population of protected smalltooth sawfish will expand north to as the population recovers. This project focuses specifically in the greater Tampa Bay region of the Florida Gulf coast (Hernando, Hillsborough, Manatee, Pasco, Pinellas, and Sarasota counties). Recent public reports of captures and sightings of sawfish in Tampa Bay and research-tagged sawfish occurring in the area highlight the need to begin working in the region. 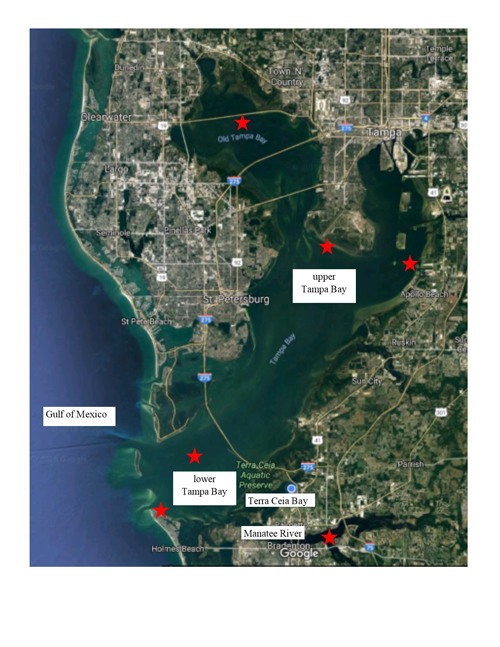 This project is investigating the historic and current populations of sawfish in the greater Tampa Bay region of Florida with the ultimate goal of providing vital information on smalltooth sawfish in the area to recommend strategies for species conservation and recovery. To investigate the occurrence, habitat use, and movements of smalltooth sawfish in the area, we are using public encounter information, field surveys, and acoustic monitoring. The collection of crucial scientific data on the relative abundance, spatial and temporal distribution, movements and habitat use, and biology of smalltooth sawfish in Tampa Bay will improve our overall understanding of the population. This study will allow us to monitor the population as it recovers and expands northward, develop recommendations for management and protection strategies to assist in the recovery of the species and educate the public about their role in the conservation of the species. But before we even get out on the water, there is a lot of prep work that must be done. This is a look at all the behind-the-scenes labour that must be completed before the project could even begin.

Permitting and Clearances
Authority to work on endangered sawfish requires specialized training and experience to be granted an Endangered Species Act permit from NOAA Fisheries Office of Protected Resources. Permission to use longlines and gillnets, which are typically considered restricted gear, required getting a scientific permit called a special activities license from the Florida Fish and Wildlife Conservation Commission. Leading a crew for sampling in restricted areas (such as a military base, power plant, and shipping port) required undergoing a background check, attending a class, and obtaining special clearance. Many of these permits and clearances require months (some over a year) to process, so early planning was crucial. Before every field day we must submit a float plan to the proper authorities (such as state and county law enforcement and marine patrol) to notify them of the areas in which we will be sampling, who is on board, what gear we will be using, which permits grant us authority for the work, and our start and end times. 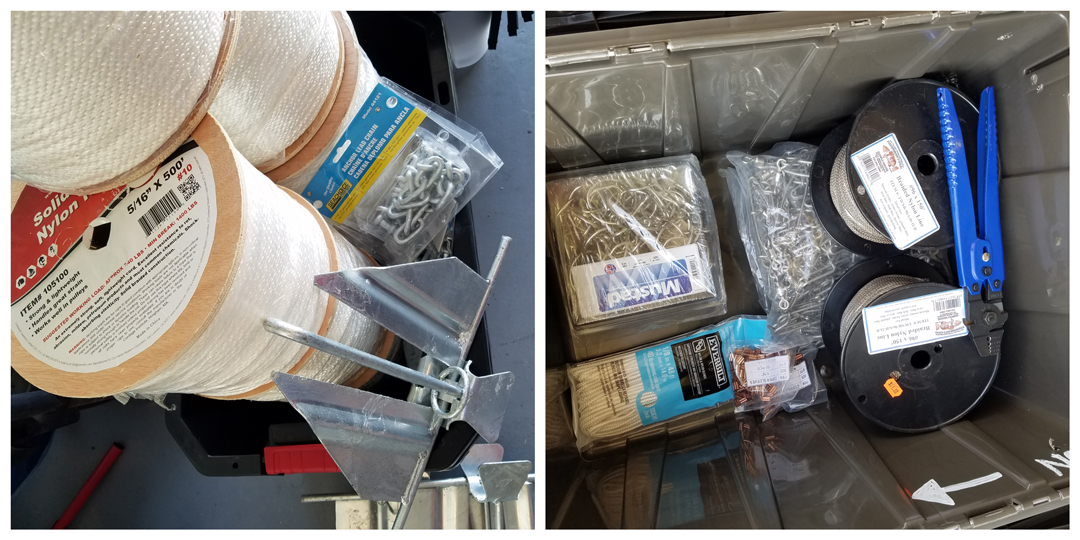 Ordering Supplies
Once we found out the Save Our Seas Foundation grant was awarded (yay!), the first step was to order supplies and materials as some equipment took several weeks or months to arrive. Gill nets, longlines, receivers, batteries, transmitters, bait, hooks, anchors, storage bins, field gloves, tags and taggers, buoys, swivels, crimps, rope, shackles, gangion clips, knives, scalpels, sutures, and much more had to be inventoried and purchased. 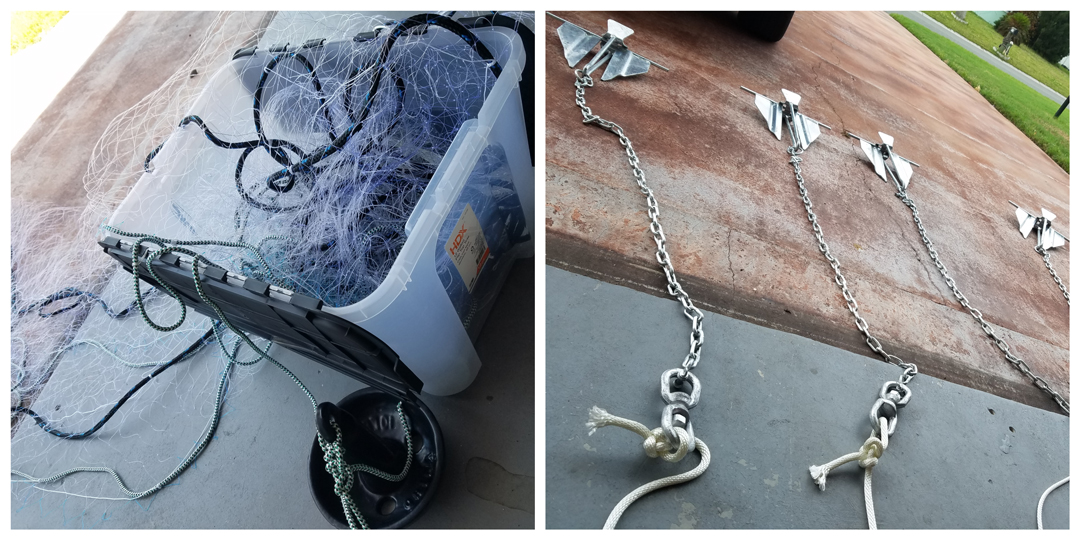 Making Gear
Once all the pieces arrived, then we had to assemble the gear. Anchors and buoy lines had to be attached to the gillnets and longline mainline ropes before they are placed in storage bins. Longline gangions had to be constructed by assembling a gangion clip, rope, swivel, leader, and hook, then neatly placed in a bin. It’s important to remember to drill drainage holes in the bottom of all bins used for gillnets, longlines, and gangions! All buoys and floats used on the sampling gear had to be legibly labelled with all permit numbers. 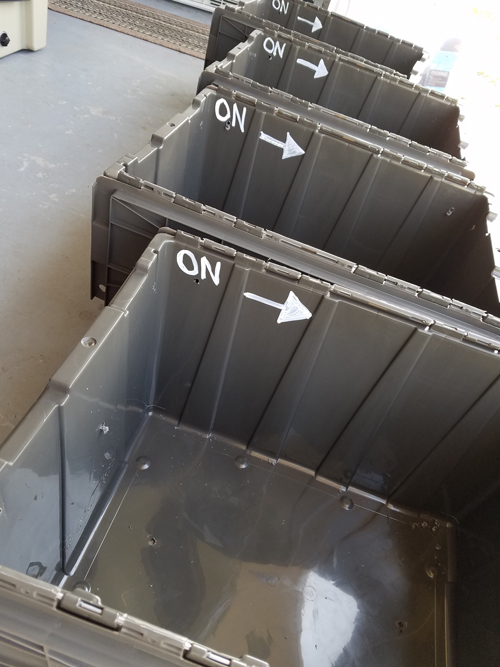 Acoustic receivers (Vemco VR2Ws) were strategically placed around Tampa Bay to help determine where and when sawfish are occurring in Tampa Bay. Onset Computers HOBO data loggers were deployed with the receivers to record the salinity at each station. The anchoring system for the VR2 receivers and housings for the HOBO dataloggers had to be fabricated. We had to label, program, and install batteries in the new receivers and set-up the new HOBOs. 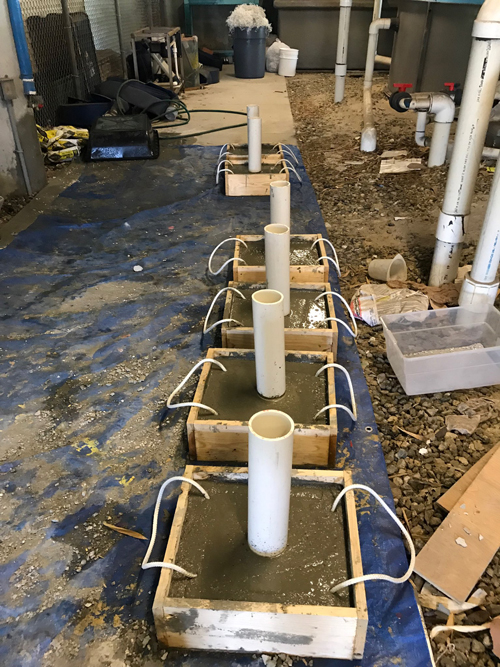 There are a bunch of other little things that had to be done such as printing datasheets, organizing tagging and sampling kits, creating a field sampling checklist, and stocking a first aid kit.

Schedule field days
To schedule when and where we should go sampling, many things must be taken into consideration; such as when sawfish have been observed in a certain area, the tides and crew availability. It’s essential to have experienced people on the boat to work the gear and handle animals, but putting together a field crew is also a valuable outreach and training opportunity for students and volunteers. It’s always important to reserve backup dates in case weather, vessel, personnel, or other logistic problems cancel a field day.

The Night Before
This is when a field sampling checklist really comes in handy. Equipment such as cameras and PIT tag readers need to be charged, safety gear and first-aid supplies must be checked, the weather forecast needs to be triple-checked, and all sampling and tagging gear should be inventoried and checked to ensure everything is in working order. A thorough check of all boat systems such as the bilge pump, navigation lights, and fluid levels is a must. A detailed checklist is key to a good and safe field day! 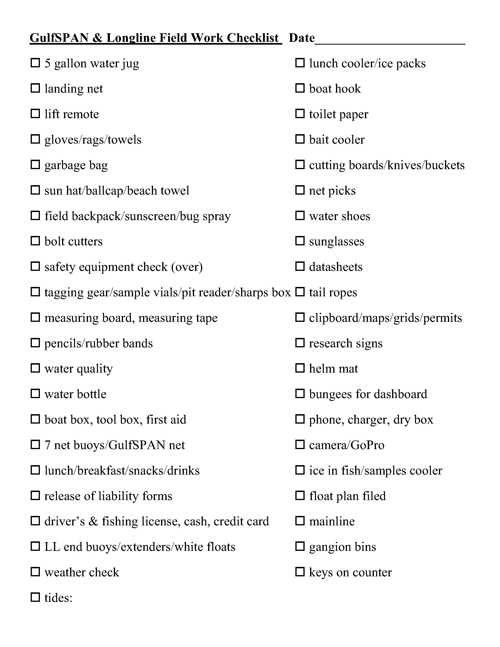 Ready to Go
Now that all the prep work is done and the boat is loaded, it’s finally time to get out on the water and try to catch an endangered smalltooth sawfish in Tampa Bay. We’ll keep you posted on project results!