In an effort to protect life in our oceans, especially sharks and rays, we have also expanded our support of global marine research, conservation and education initiatives. Our Keystone Grants are a great example of this in action; aimed at generating critical knowledge on marine species and their habitats.
This year, these more robust Keystone Grants have been awarded to seven new projects that will run for up to three years received funding at an average $25,000 each.
Explore these innovative collaborations below: 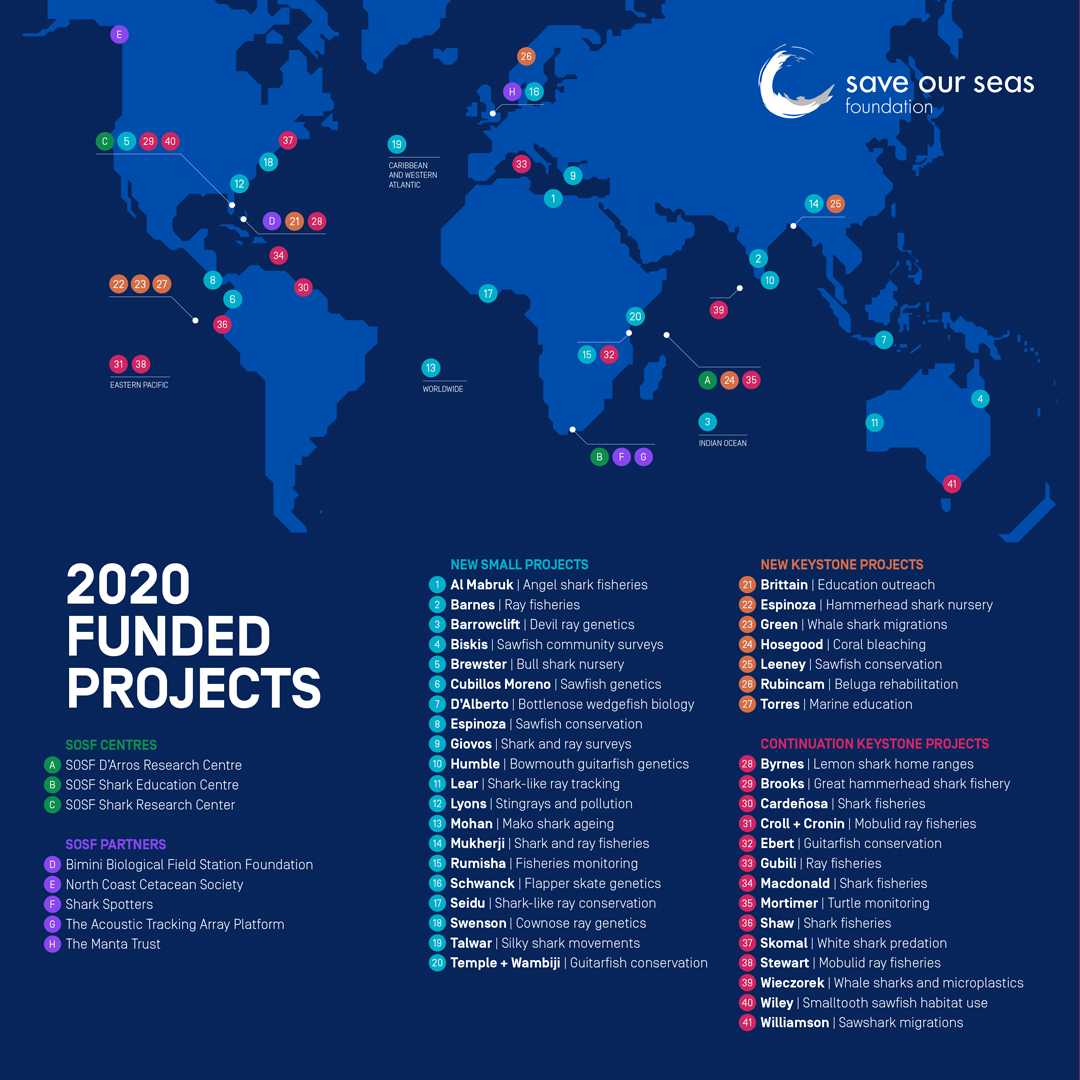 Building a generation of critical thinkers and fostering a sense of connection are what Candice Brittain’s work at the Cape Eleuthera Island School in The Bahamas is all about.

Jonathan Green is tracking whale shark movement patterns using different satellite tags to understand where they are moving in and around the Galápagos Marine Reserve.

Phil Hosegood is deploying oceanographic moorings to track temperature, current flow and particles in the water (which may contain coral larvae). He wants to understand whether the ocean’s internal waves are indeed bringing cooler water and resupplying bleached surface reefs with new coral larvae from deeper (mesophotic) reefs.

Juan Sebastián Torres is on a mission: to get local people into the ocean around the Galápagos Islands and thereby spark a connection that will see them want to protect their environment.

Does body size influence how much energy a shark needs? Evan Byrnes is investigating how this is linked to the home range size of lemon sharks, and how they use their habitat.

Jill Brookes & Hannah Medd are trying to understand what the impact of catch-and-release recreational fishing is on Endangered great hammerhead sharks in Florida.

Deigo Cardenosa is using a variety of methods to understand the status of shark fishing and trade, helping Guyana to make the best decisions for its ocean life.

Melissa Cronin and Donald Croll are working with the Inter-American Tropical Tuna Commission to find out which Manta and devil ray species are caught in the Eastern Pacific.

The shark-like rays are some of the most threatened species in the sea. In the Western Indian Ocean, David Ebert is untangling their taxonomy, getting to know where they live and investigating their fisheries status in order to inform better conservation strategies.

Chrysoula Gubili is identifying which batoids are caught in the Mediterranean to understand the effects of fishing practices and what illegal, unreported and unregulated fishing means for vulnerable species.

Catherine Macdonald is figuring out which sharks live in St Vincent and how they are utilised by local communities.

Kirsty Shaw is testing a Lab-on-a-Chip system, a portable, cost-effective way to identify sharks in the field

Josh Stuart is training fishery observers to assess whether or how mobulid rays survive after being released from purse-seine fishing nets in the Eastern Pacific.

Alina Wieczorek & Guilia Donati are investigating how whale sharks are scooping up microplastics as they feed and trying to find out where these plastics might be coming from.

Tonya Wiley is searching for clues in Tampa Bay, the first place where recovering sawfish populations would extend their range north.

Jane Williamson & Paddy Burke are using a variety of methods to improve our understanding of the conservation status and management of sawsharks threatened by fishing in south-eastern Australia.

Gregory Skomal is estimating seasonal predation rates of white sharks on seals and identifying which environmental conditions are associated with predatory behaviour in order to improve public safety practices.