Shark survival from the shore 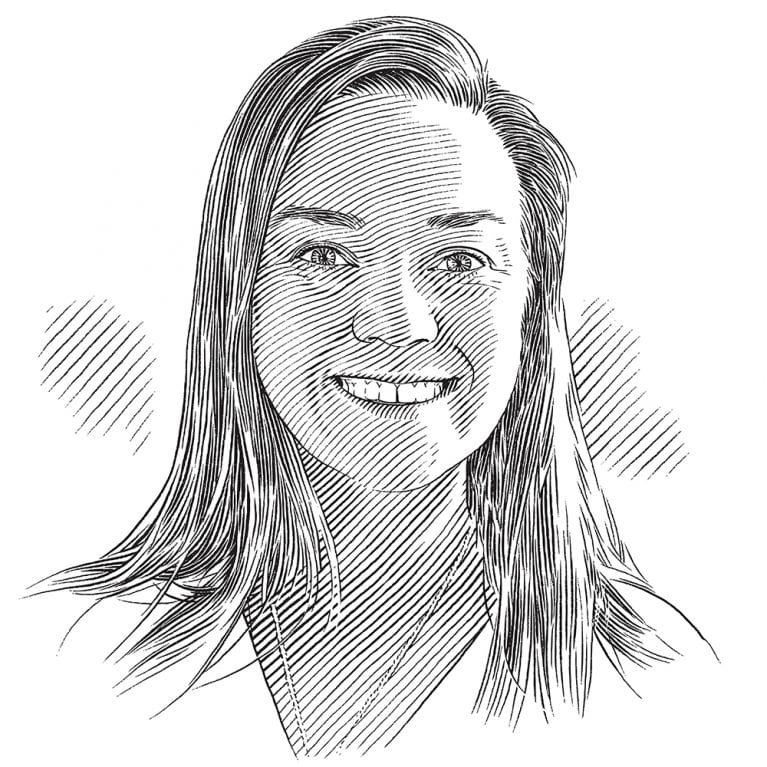 Mum knows best, I suppose, because when I was 10 my mum suggested marine biology as a career and here I am today, a scientist who has been studying sharks for more than 10 years. How did I end up where I am? It wasn’t a linear path. I zigged and I zagged. After growing up in rainy Lancashire in north-west England, I went to Bangor University in Wales for my undergraduate degree. I finished with grades that I decided would not get me a job or into grad school. So I zigged. Still keen on immersing myself in the... 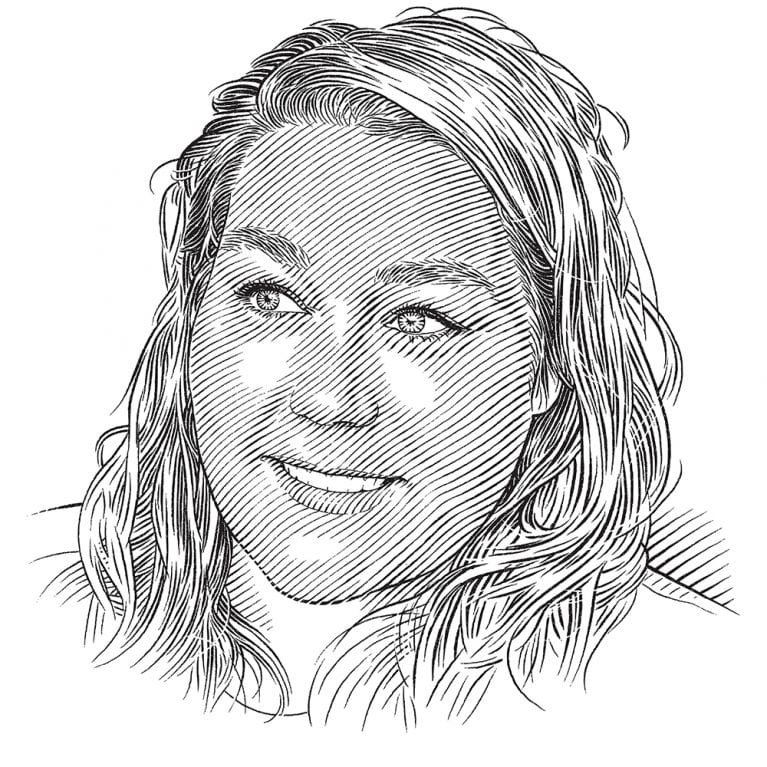 I grew up as a water-baby, or at least that’s what my parents called me. I’d wriggle out of the grasp of concerned bystanders and run face first into the waves, sand-filled diaper dragging, as my parents smiled with a shrug from their beach chairs. Of course, they were vigilantly watching me, but they knew it was futile to keep me on dry sand. At 11 years old, I read that my local beach was a hotspot for shark ‘attacks’, which did not make sense because I had never seen a shark while snorkelling, swimming, kayaking and surfing there. Fear... 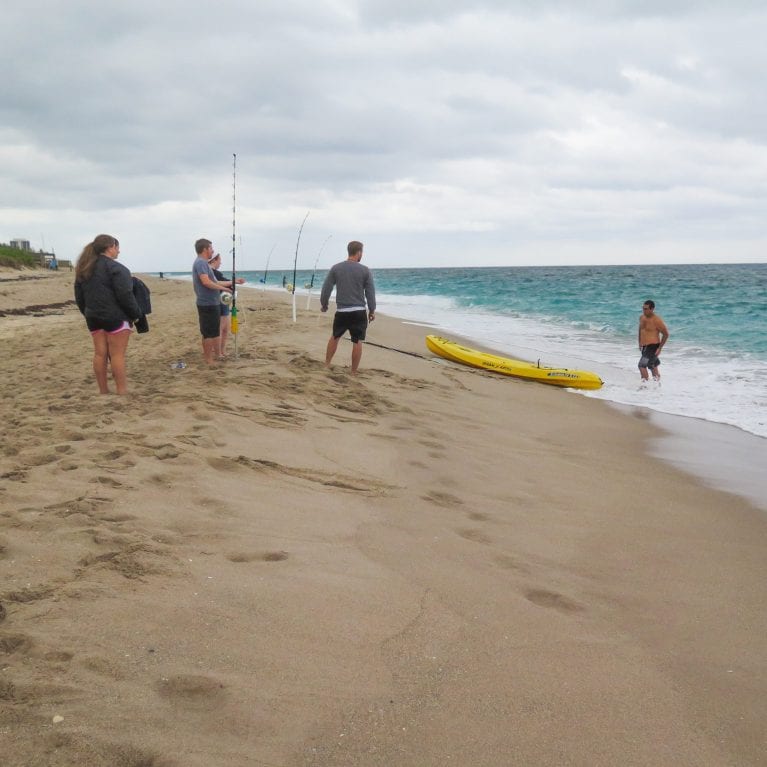 Sand Everywhere!
The first thing you need to know about shore-based shark fishing is that sand will get everywhere. In your car, in your shoes, in your shower, somehow, it even gets into your hair. Having done most of our shark-y research catching and tagging sharks from…

Conservation with a little help from our (fisher) friends
“It’s time for us to realize that conservation isn’t about biology anymore. If you are standing on the shore of some poor little town, looking out over the water trying to figure out how to save some inspiring ocean species, just stop and turn around…
Project details

To collaborate with anglers to identify the consequences of catch-and-release, land-based angling on great hammerhead sharks (Sphyrna mokarran; GH); identify human and environmental factors that contribute to mortality; provide data for local and globally relevant, evidence-based policies; and improve the sustainability of an increasingly-popular fishery by defining strategies to improve the outcome for released sharks.

The Florida Fish and Wildlife Commission (FWC) prohibits landing of GHs yet they are frequently targeted or caught as bycatch in the recreational sector. Recreational fishing is rarely considered to impact shark populations however it was recently revealed that numbers of non-dogfish sharks landed from this sector were double that of the commercial harvest values in the US. Multiple washed-up GH carcasses throughout land-based, catch-and-release sharkfishing tournaments have resulted in contentious discussions amongst user groups and provided anecdotal evidence that this species is vulnerable to recreational fisheries related incidental mortalities (FRIM). As a result, FWC is reviewing their regulations for this sector and have acknowledged they have minimal biological or socioeconomic data for this fishery. Effects of land-based angling on GHs are currently unknown. Our project will collect mortality estimates from this open-access, largely unregulated fishery to be considered in the commercial quota calculations and State level regulatory changes, and guide best-handling practices for anglers.

Shark populations around the globe are currently under threat from fisheries, habitat loss, and climate change. Population declines have led to increased monitoring, management, and research into bycatch mitigation and survivability within the commercial fishing sector (Skomal 2007). The recreational sector is thought to have minimal impact on shark populations and has received relatively little attention in both the management and the research realms.

Catch-and-release angling is a non-consumptive management tool and common practice in the recreational sector. It allows anglers to fish with the assumption that their targeted species remain in the population. Over 90% of shark anglers in the US report they practice catch and release (NOAA 2011). Studies have shown, however, that many fish species, including sharks, undergo various levels of stress and mortality because of this practice, negating the intention of this conservation tool (Brownscombe 2016; Ellis 2017).

GHs are particularly vulnerable to overexploitation and are currently categorized as ‘Endangered with extinction’ by the IUCN (Denham 2007). Authorities in Florida, US, granted protection to this species by prohibiting landing in the State’s jurisdictional waters and suggest sharks be “immediately returned to the water free, alive and unharmed” (FWC 2018). The GH is a highly prized trophy fish among the shark angling community which self-report that they practice catch-and-release. For a GH, an obligate ram-ventilating species that must maintain constant swimming to survive, any form of capture or entanglement can result in post-release behavioral impairment due to high levels of stress and exhaustive exercise (Gallagher 2014). GHs suffer higher post-release mortality rates than many other species of sharks, with high mortality rates in trawls (97.6%), protective nets (98.3%) and gillnets (71.5%-89.3%; reviewed in Ellis et al. 2017). Fight times from land-based angling can exceed several hours and we predict the physiological stress of this exceeds the limit for GHs. Recently, increasing numbers of GH carcasses have washed up on beaches leading to contentious discussions between State resource managers, conservationists, and anglers and have led to a series of town-hall meetings to address the issue.

At the Federal level, Atlantic shark commercial quotas are calculated using an initial stock assessment to provide an absolute maximum level of fishing mortality known as the Total Allowable Catch (TAC). Once a TAC has been established, all sources of fishing mortality outside of commercial landings are deducted, the remainder becoming the commercial quota. These sources include the post-release mortality. The Marine Recreational Information Program (MRIP) is how NOAA Fisheries count and report marine recreational catch and effort using data provided by anglers and captains. Plotted catch data of great, scalloped, and genus-grouped hammerheads since 1998 highlight the huge range, the potential for large error, and an overall lack of catch information regarding this shore-based fishery in Florida (Figures 2-4). Using the crudest math and ignoring all errors associated with the data, we have attempted to put this issue into perspective. The annual commercial quota for the hammerhead complex (scalloped, smooth, and great) for the whole Atlantic region is 59,736lbs (dressed weight (DW)) and an average dressed great hammerhead weighs 265lbs (3.5m GH weighs 530lbs, DW/WW= ~0.5; Castro 2011; Pleizier 2015), which equals a very approximate 111 individuals for harvest in 2018. The MRIP catch data show a range of 2015 to 77599 GHs reported as caught from shore, per year, in Florida, over the last 35 years, and Shiffman et al., (2017) reported 115 hammerhead species caught and posted in just one South Florida fishing forum between 2010-2015. This recreational fishery has a potential to impact the population more than the frequently blamed commercial sector.

Ocean Connectors bridges the gap between marine experts and urban youth in San Diego, California. For this project, Frances will use endangered thresher sharks as a case study to develop a programme for middle school students that teaches them about the threats faced by pelagic sharks.