The first thing you need to know about shore-based shark fishing is that sand will get everywhere. In your car, in your shoes, in your shower, somehow, it even gets into your hair. Having done most of our shark-y research catching and tagging sharks from a boat, we were prepared for most aspects of our fieldwork following recreational anglers around south Florida as they targeted great hammerheads…except the sand. 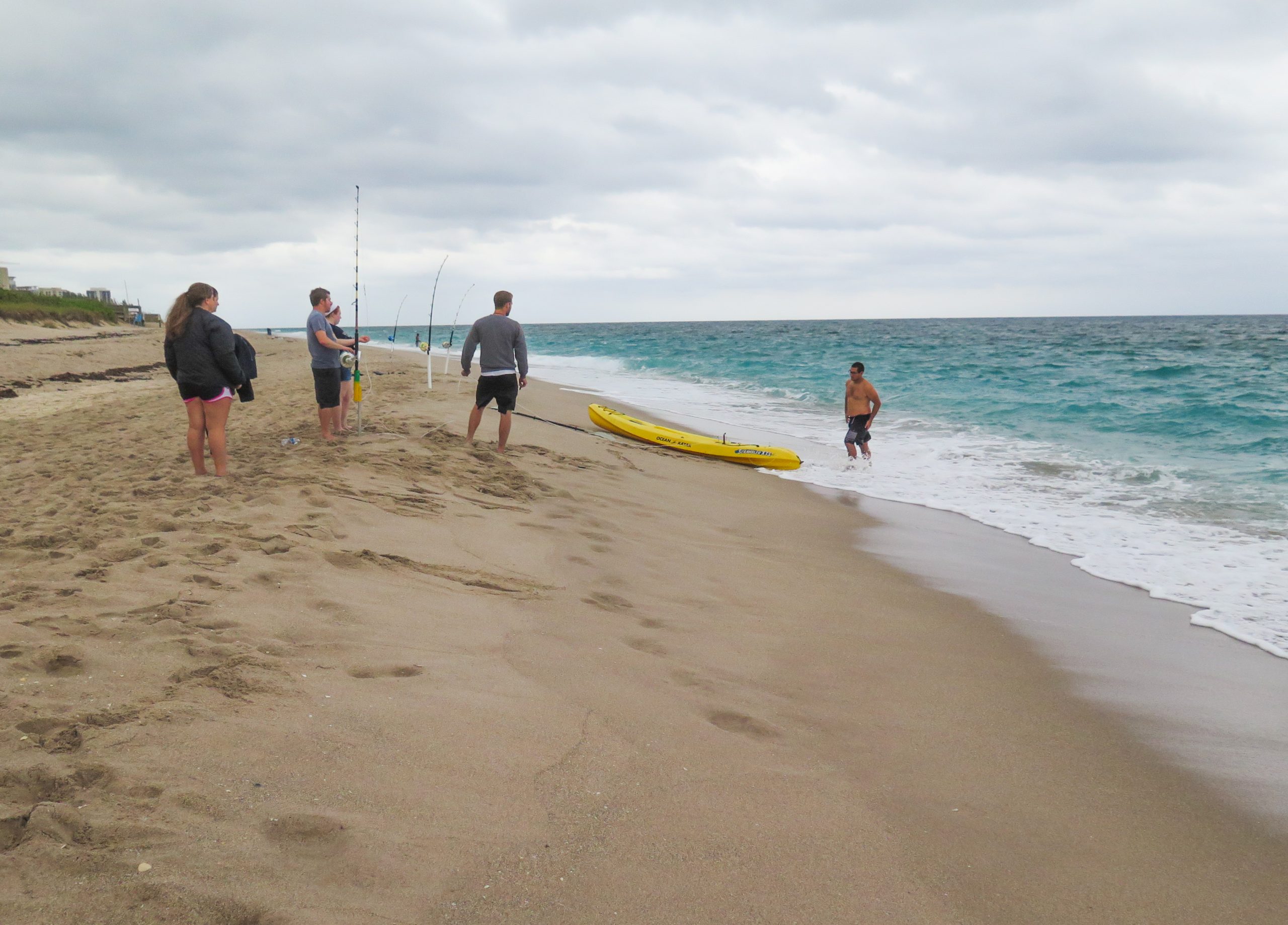 Shore-based shark fishing is a unique fishery that occurs along the shorelines of Florida, Texas, California, and the mid-Atlantic states as well as Australia and South Africa. Here in Florida, the Florida Fish and Wildlife Conservation Commission (FWC) recently defined this activity in their regulations. Typically, shore-based shark fishing is just as it sounds, targeting sharks with recreational fishing gear from shore and sometimes bridges and jetties, mostly at night. The anglers usually use “heavy” fishing gear (i.e. big hooks, thick fishing line, big rods and reels). The bait is usually heavy so they can’t cast it like other anglers so they will put the rod in a sturdy pipe or “sand spike” at the water’s edge, put the bait on the hook and then onto the back of a kayak and paddle out 200-300 m (sometimes further, depending on the location), drop the bait in the water and paddle back to shore to wait for the reel to go off. When something is on the hook, the line goes out of the reel very quickly and many reels have a “clicker” that makes a loud noise as the line goes out. The angler usually puts on a fighting belt that has a hard base to hold the end of the rod and clips directly onto the reel, which helps with leverage during the fight. The anglers reel the sharks into the shallows until someone on their team can handline the thicker “leader” portion of the line closest to the hook, bringing the shark into the wash zone where they can access it. Anglers sometimes use a tail rope to pull the shark out of the crashing waves so they can get to the hook to remove it and take a measurement and a picture of their catch. *This is where we come in, quickly fixing a satellite tag on landed great hammerheads* Once the hook and line are removed, they pull or push the shark back into the water. This can all go quickly and smoothly but as we all know from working with wild animals in their natural environment, things never seem to go the same way twice. Seas can be rough making kayaking and handling the sharks difficult, lines can get cut off by other sharks and fish, sometimes hooks get reeled in and the bait hasn’t been touched at all. 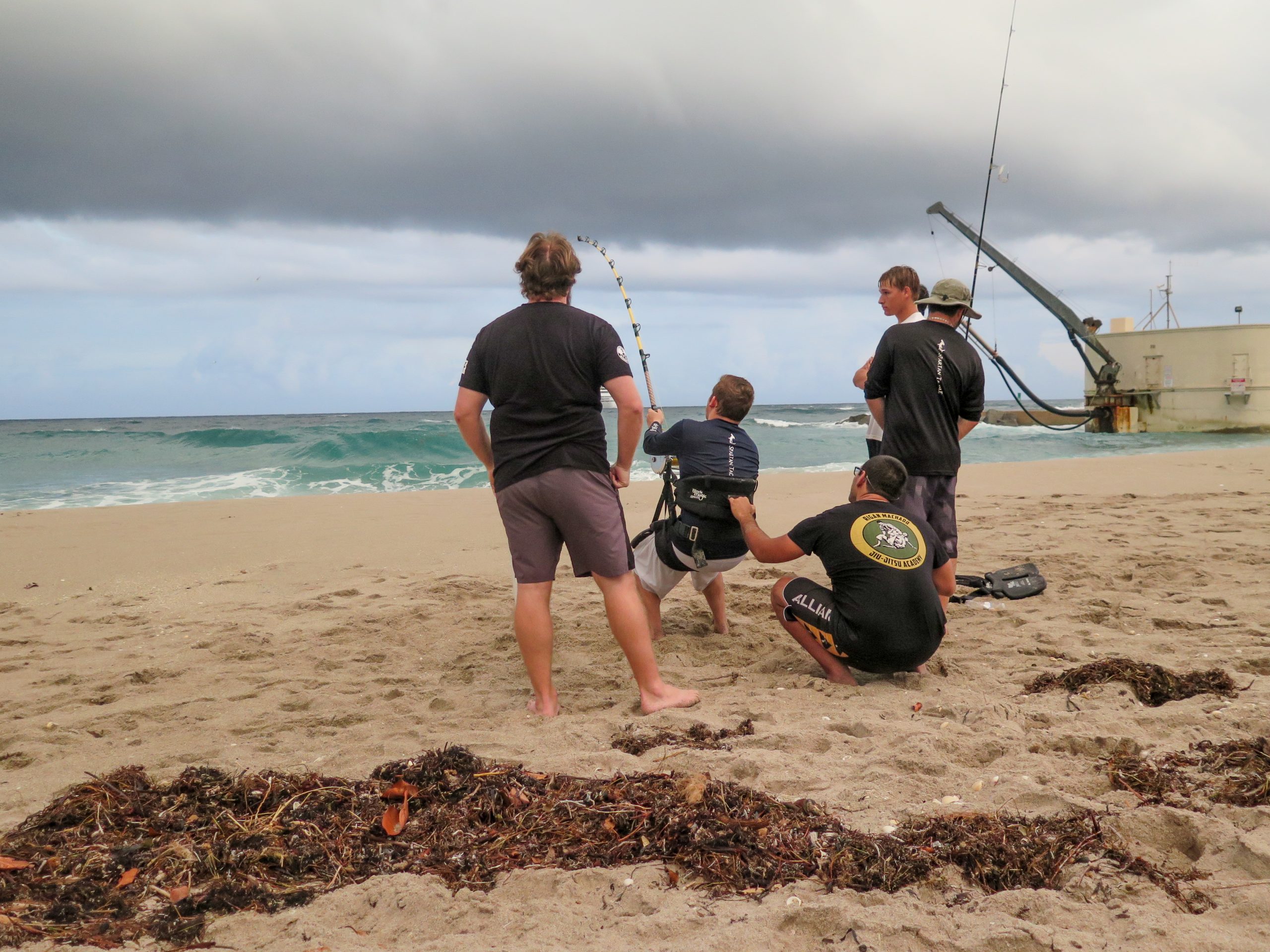 Within weeks of instituting new regulations on shore-based shark fishing that require the successful completion of an online course to receive a permit, the FWC let us know that more than 10,000 people had signed up for the course and more than 8,000 had completed it. That level of interest in a state-specific permit was a shock to us. And that points us to the other challenge in managing recreational angling, there is no required reporting of effort or catches. U.S. commercial shark fishing operations have a long list of requirements, including trip and catch reports but no such reporting is required of recreational anglers. The information of how often anglers’ fish for sharks, what they catch and/or harvest is opportunistically captured in phone and dock-side surveys conducted by the FWC biologists as part of the Marine Recreational Information Program headed by NOAA. We suspect much of the shore-based shark angling effort and catches goes undocumented in this program because of the nature of the fishery occurring mostly at night and continuous public scrutiny. Again, this is where we are helping. By explaining to the anglers why we need these data and how they will be collected and used, we are capturing more information that can be used to improve the management of these sharks. So, a little bit of sand in our hair is worth it! 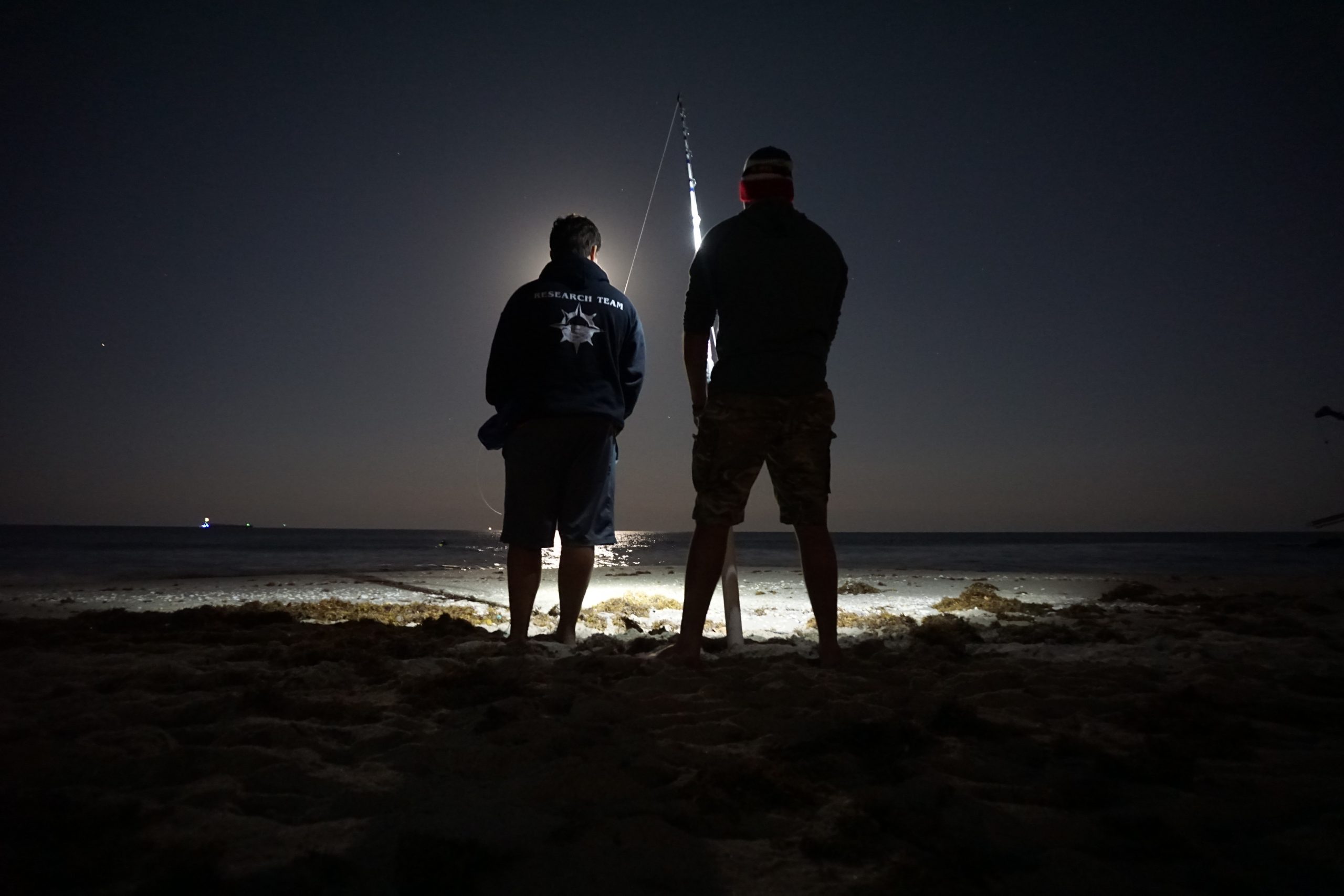 “Shore-based shark fishing” means targeting or harvesting any species of shark when fishing from shore, wade fishing, or fishing from any structure attached to shore, including but not limited to bridges, piers, docks, and jetties. Fishing from shore or any structure attached to shore by or with any of the following gear or methods shall constitute shore-based shark fishing regardless of the species targeted or harvested.

(a) Fishing with a metal leader greater than 4 feet in length.

(b) Using a fighting belt, fighting harness, or similar device used in conjunction with a fishing rod to give the angler a mechanical advantage when reeling in a fish.

(c)1. Except as provided in subparagraph 2., deploying bait by any means other than casting from shore or casting while wade fishing, including but not limited to transporting or dropping the bait by or from a vessel, surf board, drone, or by swimming.

2. Except when targeting or harvesting sharks, deploying bait by means other than casting shall not constitute shore-based shark fishing if the bait is attached to a hook for which the maximum distance measured between two points inside the curve created by the hook does not exceed 1.5 inches, when measured at the widest dimension.