Shark science: the sky is the limit

In less than a decade, drones have rapidly become indispensable to the world of film and photography. Their reach is ubiquitous as people now use them for everything from personal and professional filming, to conservation management and research.

Their key benefit to researchers is the ability to observe animal behaviours and interactions in their natural environment remotely and without interference. They also provide a cost-effect aerial perspective that could previously only be achieved through expensive charters of planes and helicopters.

The freedom of perspective that drones provide enables researchers to witness and analyse interactions from afar. This means that there is less disturbance from humans on natural behaviour, and it reduces the impact on the natural environment. As such, drones enable us to capture the true nature of the animals in their habitat.

A drone image of a monitored mature lemon shark is fitted with an accelerometer in and a juvenile lemon shark in the shallows. Photo by Ryan Daly | © Save Our Seas Foundation

Drones have proven particularly useful in the field of shark science. A recently published paper The drone revolution of shark science looks at how drones have advanced our understanding of shark behaviours and movements, social interactions, and predation across multiple species and scenarios, while also minimising risk for humans. The Save Our Seas Foundation is a proud supporter of this pioneering research, having over the years been involved with several innovative shark research projects that have made use of drones. 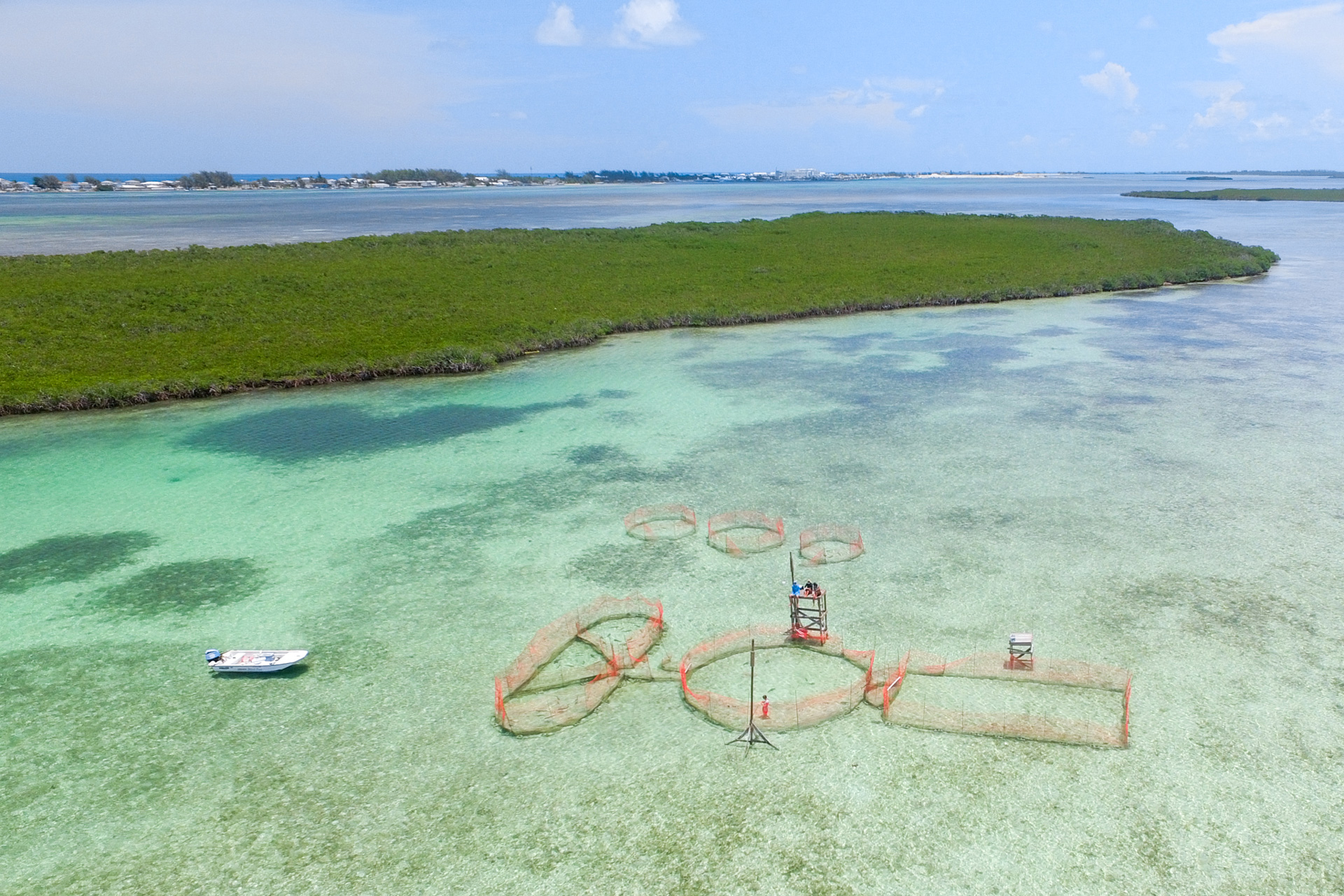 Situated between the Bimini lagoon and some mangrove islands, the project location attracted an incredible diversity of wildlife. Photo © Sirachai Arunrugstichai | Save Our Seas Foundation (Jack Massuger as drone pilot).

Save Our Seas Foundation CEO, James Lea was the lead author on a paper that establishes the benefits of using drones to study the richness and behaviour of scavengers attracted to a carcass. The team recorded over 30 sharks of 3 species (tiger shark, bull shark and tawny nurse shark) scavenging on the carcass of a sperm whale in Seychelles, Western Indian Ocean. Tiger sharks dominated the scavenging, but with no evidence of agonistic behaviours or hierarchy, and may have facilitated scavenging by other species.

“The great thing about drones is they remove any effect an observer may have on the behaviour of the animals, ensuring what we witness is entirely natural,” explained Lea about why the team chose to observe scavenging on a whale carcass via drone and not in-person observation. “Prior to this, all our knowledge of shark scavenging behaviour came from direct observation. But if we approach with a boat and get in the water, how can we be sure the behaviour we’re seeing is truly natural, and not in some way influenced by our presence?”

Drones across the water – Sonja Betschart

“In many areas of nature conservation drones can be a game-changer. They enable researchers and conservationists to create quickly and cheaply their own high-resolution maps and 3D models that can then be used to analyse information and to answer questions relating to the environment.” Writes Sonja Betschart. 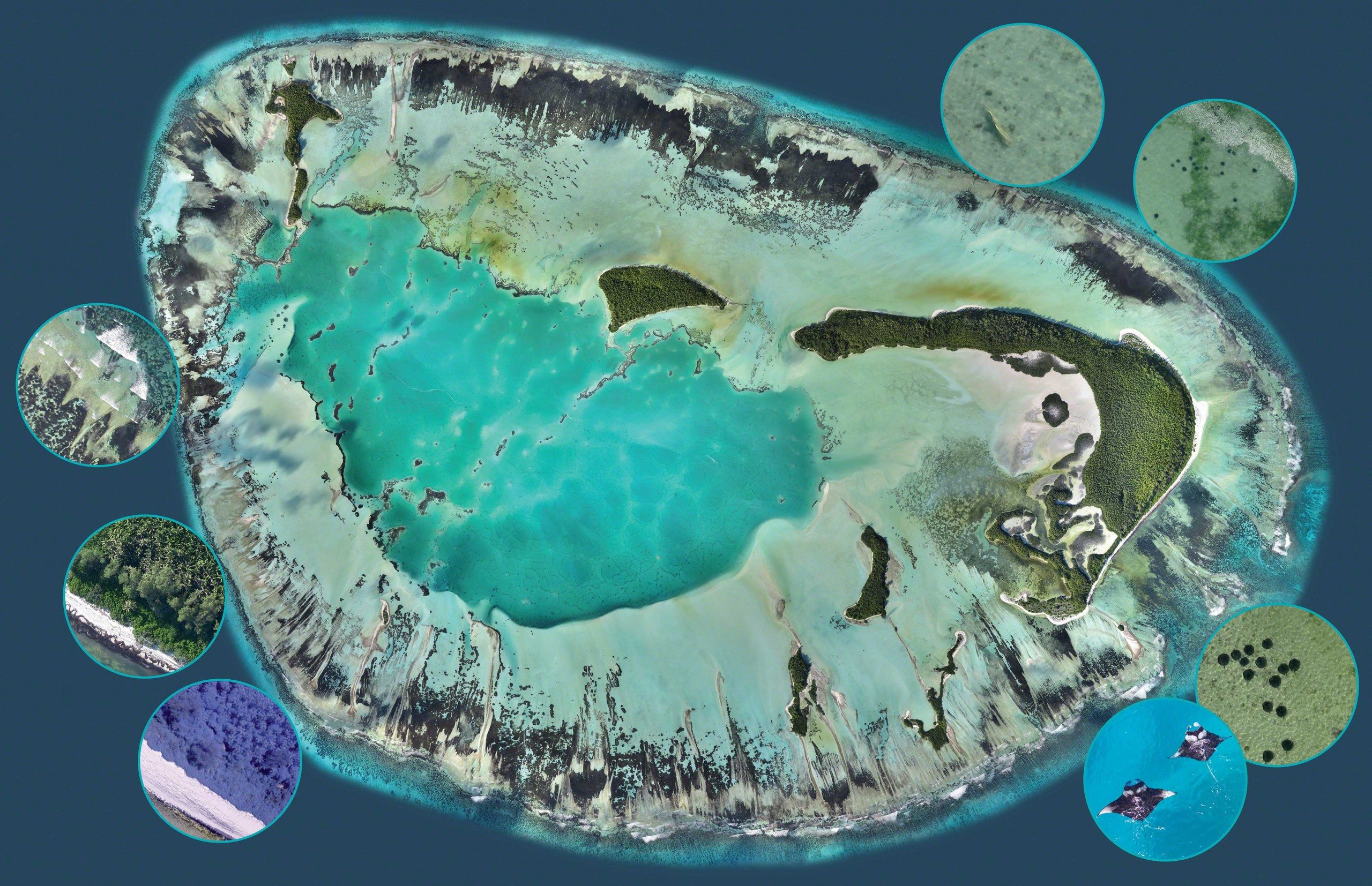 This high-resolution map is a composite of thousands of images captured with drones flying simultaneously. The software ensures that any moving objects are discarded, but the circular images show some of the fauna and flora that was recorded during low-altitude flights.

Do human activities drive the distribution and abundance of coastal shark species?

The key objective of this project is to use a novel technique to assess the abundance and distribution of shark species in relation to human populations. We will generate baseline information for shark conservation on Abaco and refine a protocol for shark population assessment in The Bahamas. Lastly, we will use our findings for local and national outreach.

We aim to develop and adapt drones to monitor elasmobranch populations in tropical marine shallow waters, with a special focus on juvenile sharks and adult rays. We will first establish a data collection protocol and then apply it to estimating shark and ray population abundance in Moorea, French Polynesia.

This study will capitalise upon the unique blacktip aggregation to assess the impact of climate change on migratory marine predators. Warming oceans drive the sharks to higher latitudes, increasing the distance of their annual migration and energetic costs en route. We aim to examine the movement ecology of blacktip sharks.

Project AIRSHIP – Kye Adams
A novel, non-invasive and continuous approach to detecting sharks at our beaches

Aerial cameras have the potential for mitigating the risk of shark-human interactions with zero by-catches. We aim to improve/automate current approaches to shark detection systems such as drones or aerial patrols. We are currently testing a blimp-mounted camera prototype, designed to provide continuous aerial coverage of swimming/surfing areas. 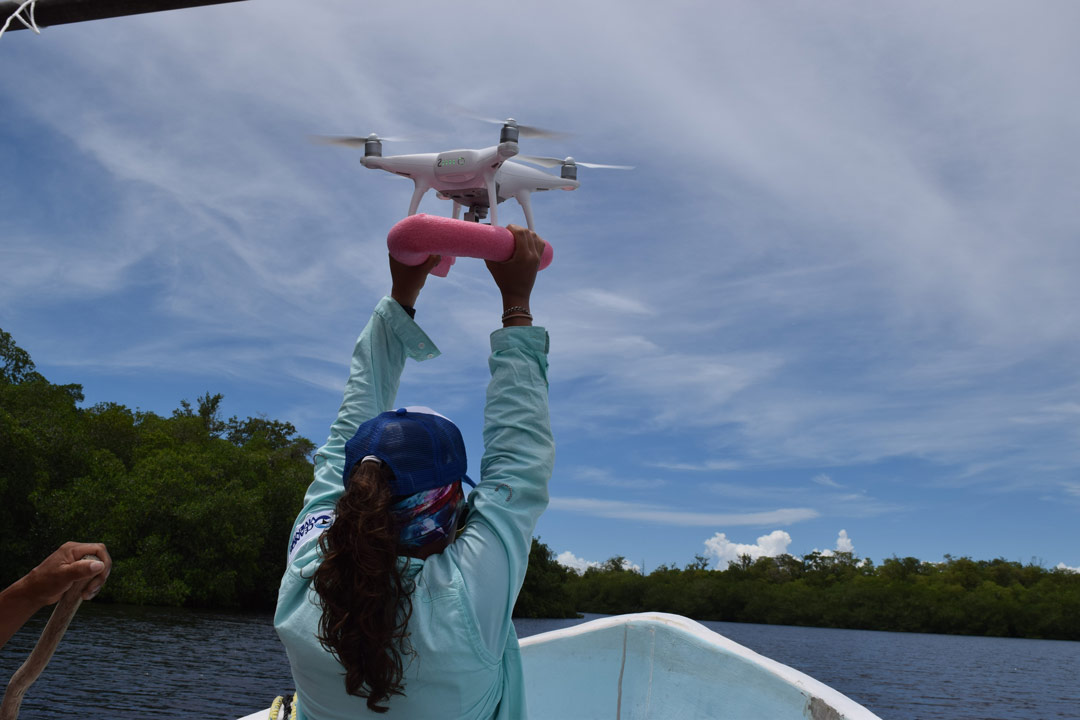 A drone ready for take-off from our ‘aircraft carrier’. The same technique is used for landing. Photo © Ramón Bonfil