The importance of collaboration

One of the keys to success in science and conservation is to establish good and strong collaborations across the board. Science is, unfortunately, a rare and difficult activity, and adding together the experience, skills and resources of several teams or individuals is always going to be an advantage, especially when working with less than popular species such as sharks and rays (let’s face it, we are still a small bunch of nerds who love un-huggable animals). When it comes to conservation this is truer than anywhere else because no one can save a species alone or in isolation, and the most important collaborations will be those we can establish with the human communities that live in and around the ecosystems we want to preserve or those that contain the species we want to conserve and recover, as well as with other users of those ecosystems and species.

Throughout my career, I have had the fortune of having been offered and having been able to incite many important collaborations. One of my earliest and fondest was when then giants of shark research Sonny Gruber, Jack Casey and Wes Pratt Jr. invited me to attend my first American Elasmobranch Society meeting, back in 1987. That was immediately followed by invitations to attend the Second United States-Japan Workshop on Chondrichthyan Fishery Biology, a shark research cruise with Sony to the Bahamas, and another cruise for shark surveys of the National Marine Fisheries Service with Jack and Wes. These invitations inspired my career as a young shark researcher and marked my future since I never looked back into any other possible career paths. Then with the years, I was able to bring about important collaborations for great white shark research in South Africa, New Zealand and Mexico, allowing us all to make extremely important contributions to the scientific knowledge of these charismatic predators. 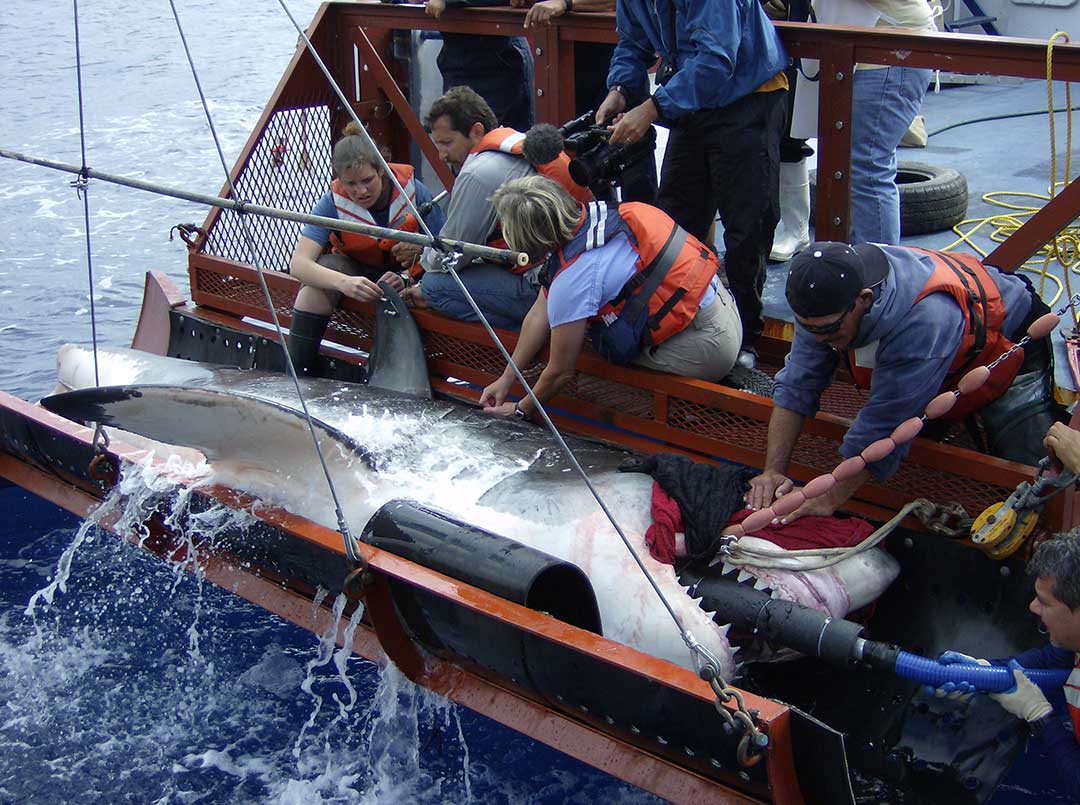 Another record was set in Guadalupe Island, Mexico, when the first ever 5+ m TL great white shark was SPOT tagged by Ramón and his Mexican colleagues back in 2006. Photo © Stephan Swanson.

Last year, after more than a year of waiting I had the fortune to be part of another small and informal collaboration, but one that meant the world to me personally and one that might bear more tangible fruits in the future. You see, I have been working on sawfish conservation research in Mexico since 2015, but fortune dictated that Mexico has very few and very well hidden sawfishes in the wild. Thus, so far we have never seen a live sawfish in the wild here in Mexico, despite having surveyed over half the coast of the Gulf of Mexico and Caribbean and part of the Pacific Coast as well. The only live sawfish we have seen was a juvenile female rescued by fishers in Veracruz back in 2016, and which we helped rescue and safeguard at the Veracruz Aquarium.

Thus you can imagine my excitement and gratitude when I finally was able to join John Carlson and Andrea Kroetz in one of their Everglades sawfish surveys last August 2019. I had “invited” myself to one of their surveys back in 2018, after hearing about their frequent surveys and that they often accepted volunteers. Knowing John since he was a graduate student was an advantage I guess, and he gladly accepted my request. But fate decided that it was not going to be so easy for me to catch and see my first live sawfish in the wild… With aeroplane ticket and everything else ready for me to join them in a survey during April 2018, they had an accident with their boat trailer and boat, and the survey was cancelled two days before I travelled! 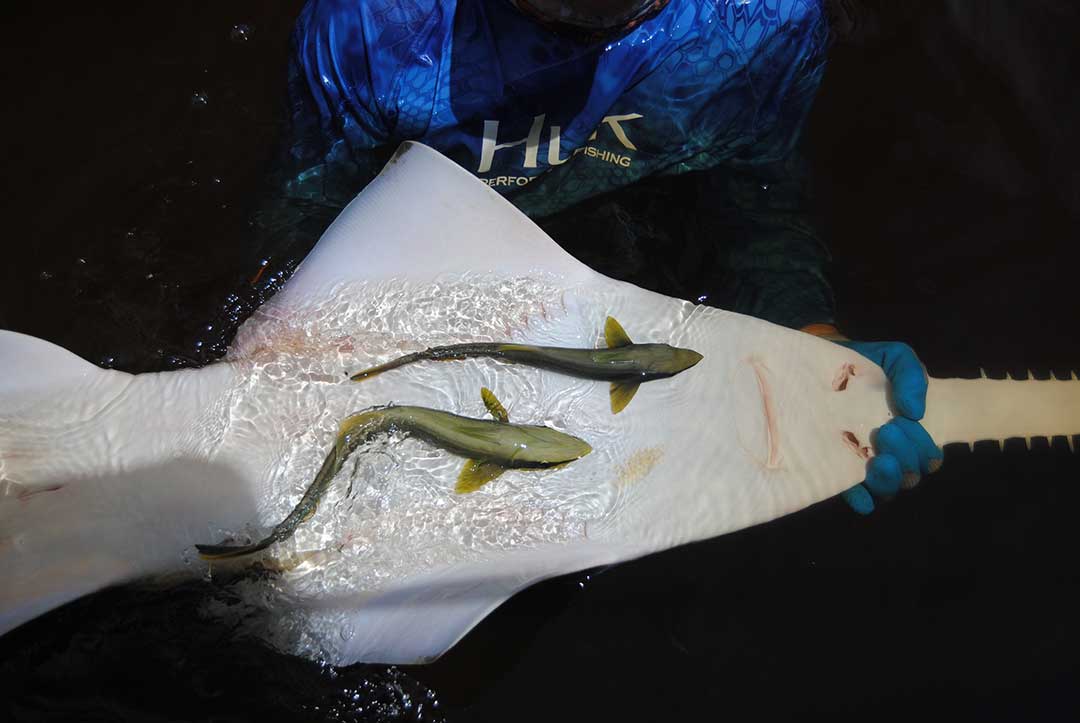 Sawfishes often have remoras attached to their underside. Here two of them can be clearly seen attached to the juvenile sawfish we caught on the second day of work. Photo © Ramòn Bonfil.

My patience and perseverance were put to the test once again (this seems to be a life-long commitment!) and I had to wait until August 2019 for another opportunity to accompany them in one of their surveys. This survey was extremely important to me because although I had set many gillnets and fishing lines in supposedly good sawfish habitat in Mexico, I had not been able to catch or see a single sawfish so far. However, we knew from the rescued sawfish in the aquarium, and from our eDNA results that sawfishes were still present in our coastal waters. So the main objective of my visit was to see exactly in which microhabitats were John and Andrea catching their juvenile sawfishes. I wanted to see the actual spots to be able to compare them to similar places in Mexico, and hopefully, also see how they set their fishing gear, and most importantly how they handled live sawfishes.

Decades of shark expeditions had taught me that catching and seeing the objective species in the wild is as much a matter of luck as it is of hard and careful background work and preparation. But I needed to know, so I asked Andrea the night before while cooking and eating at the dorm of the Florida Bay Interagency Science Center in Key Largo, “how likely is it that we will surely see sawfishes in this expedition?” to which she replied that they usually saw from 1 to 5 or 6 sawfishes per expedition, but that we would probably see at least 1. So the first morning we all got up early and ready and we were leaving port on their boat as the sun began to bring about the first lights over the sky above. Within 20 min of travel, we were approaching the first station, Eagle Key, a place where they usually find juvenile sawfishes. However, nothing could have prepared me for the surprise that life had in store for me, perhaps as a reward of my patience and passion or perhaps as a good omen of things to come for me.

As we approached the entrance of the shallow lagoon in the key, Andrea slowed down the boat and said we should get the gillnet ready. We entered the mouth of the lagoon and as soon as the boat came to a complete stop John looks overboard into the water and says “sawfish!!!”. I turned my head in the direction John was pointing and to my disbelief there it was, a beautiful 1.5 m juvenile smalltooth sawfish calmly resting on the bottom, not more than 2 m from our boat. The sawfish did not move, its snout pointing toward the boat, it was as if it had been waiting for our arrival, to welcome me and tell me “here I am Ramón, your first live sawfish in the wild, I am the reward for your perseverance” … I NEVER expected something like this happening to me! I was elated and amazed at the beauty of the fish and the significance of this happening to me! John and two young volunteers, Candace and Kelly, jumped in and circled the sawfish with the gillnet. Within 5 min they had the sawfish restrained and next to the boat and I was able to admire, photograph and film the sawfish as the team members dutifully and skillfully measured, tagged, and took samples from it. 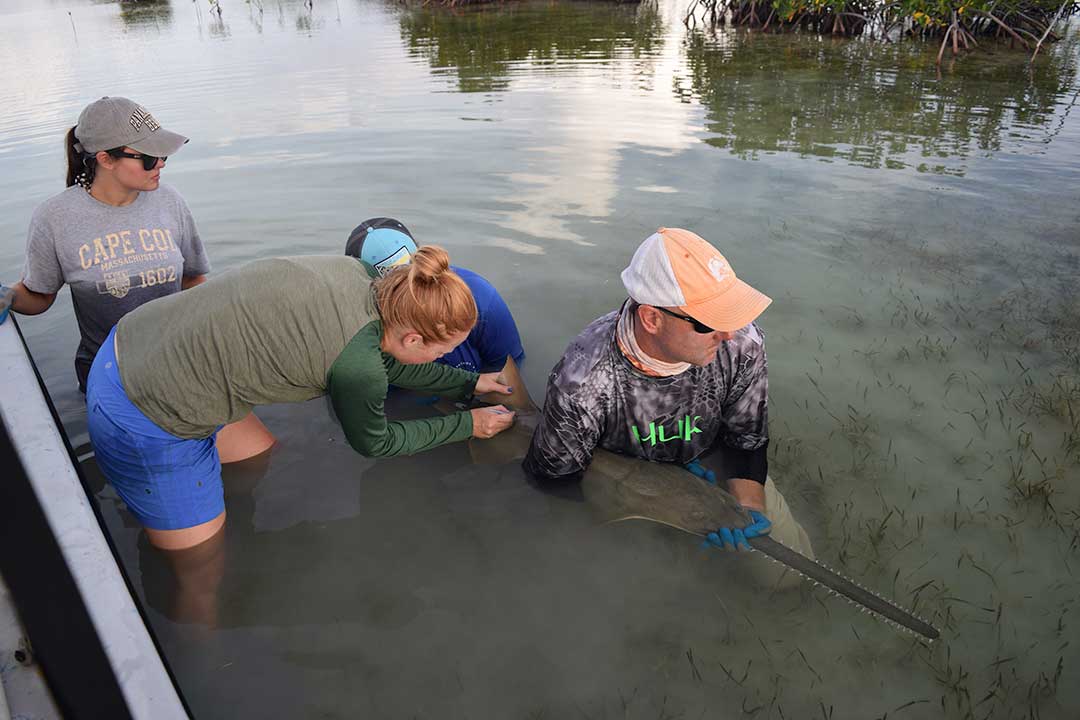 John Carlson, Kelly and Candance working with one of the sawfish. Photo © Ramòn Bonfil.

As it turned out, we caught another sawfish in a nearby place within a couple of hours, and a third slightly larger sawfish the next day in a different area (plus one that escaped our net right in front of our eyes). A total of three sawfishes in 3 days of a survey was more than I could have wished for. I was able to hold the sawfishes a couple of times and get my photograph with them. This was extremely significant to me, it was a reward for my years of effort and a great motivation to continue my work in Mexico until I find them here. But more importantly, it allowed me to see precisely in which places sawfishes can be found, and how they should be handled once caught in the net. I will always be grateful to John and Andrea for letting me have this wonderful and enlightening experience, and hopefully, this will allow us to develop a formal collaboration for 2020 between our sawfish projects in order to learn from each other and further science and conservation across borders for the benefit of sawfishes. 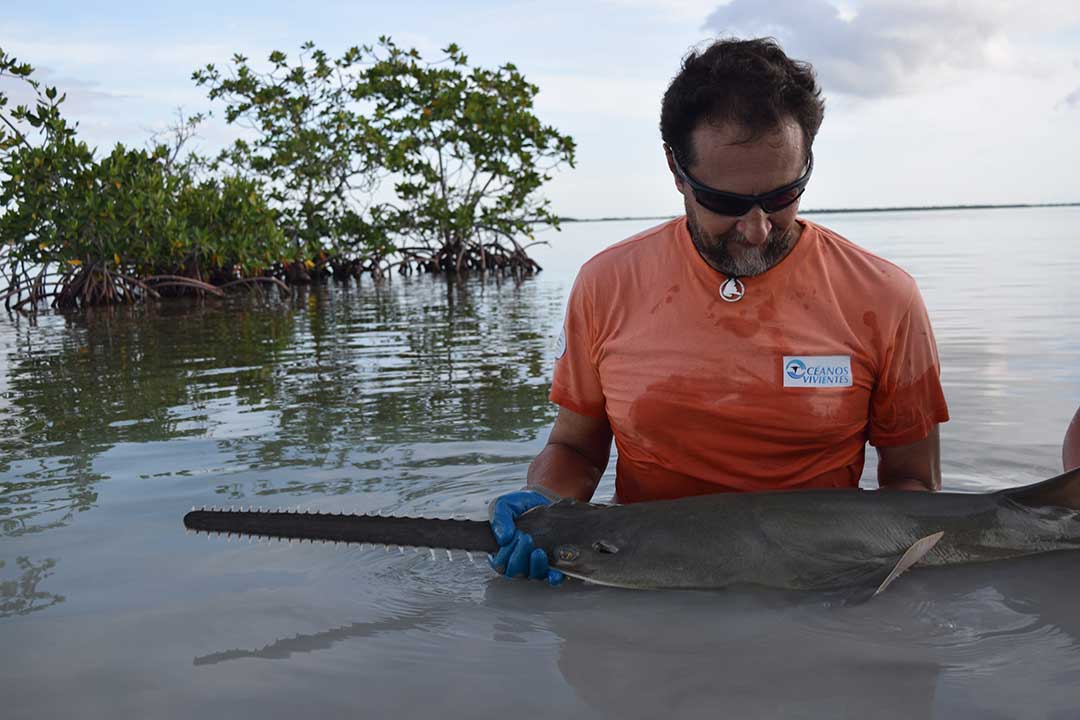 My happiness and excitement could not be hidden. I was holding my first live sawfish in the wild. May life let me repeat this feat many times to come! Photo © Ramòn Bonfil.