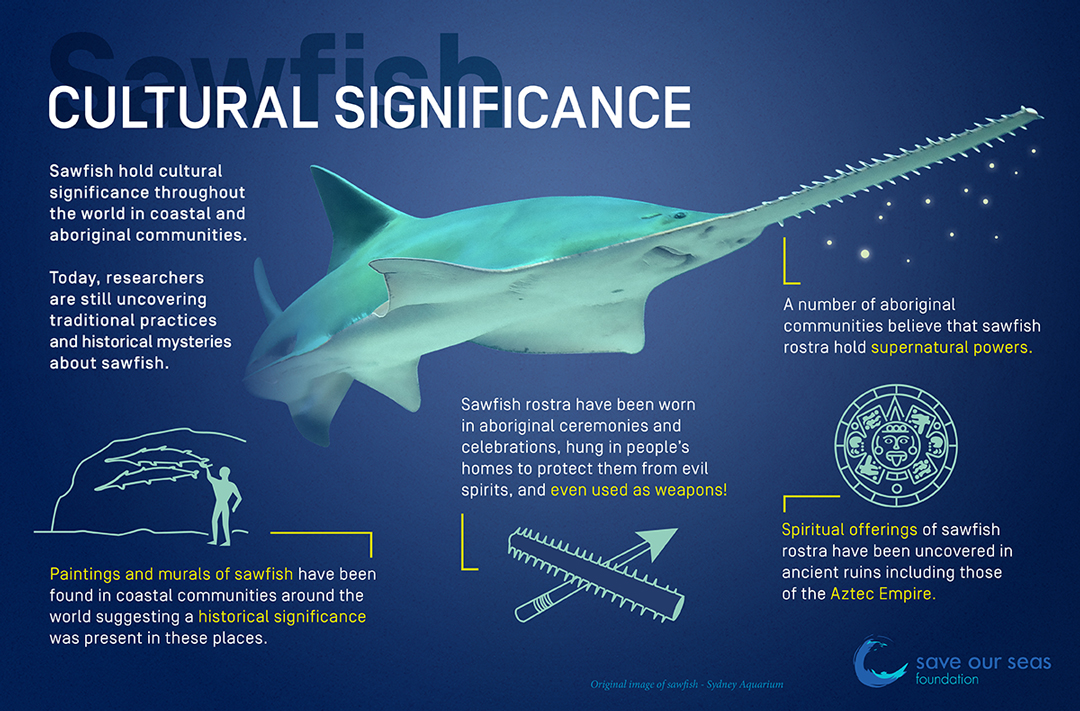 The story of sawfish — beliefs and human traditions throughout the world

Culturally and economically important in many coastal and native communities throughout the world, sawfish are believed to be symbols of strength and spirituality. This is just one of the reasons this critically endangered group of fish deserve our admiration, respect and protection.

In the Caribbean country of Panama, certain aboriginal communities believe that sawfish will safeguard humanity from the dangers of the sea by protecting them with their rostra. Other native groups in this region used sawfish in religious ceremonies, believing the animals to be spiritually powerful (McDavitt, 2002).

In northern Australia, the Anindilyakwa natives believe that ancient supernatural beings in the form of sawfishes used their sharp toothed rostra to carve out rivers and gave lands to the people. It is for this reason that they are highly regarded by locals in the area and represent admirable human traits like valour (McDavitt, 2005).

Sawfish are also culturally important in many places throughout West Africa, an area of critical concern for these unique animals. For example, in Gambia, sawfish rostra are hung by natives to protect people from fires and evil spirits. Contrastingly, in the Republic of Guinea, rostra are displayed in people’s homes to signify bravery and strength (Robillard & Seret, 2006).

In southern Senegal, rostrums have historically been used as a weapon. This part of the sawfish is believed to contain magical powers in parts of West Africa, and has even been used in healing ceremonies (Robillard & Seret, 2006). 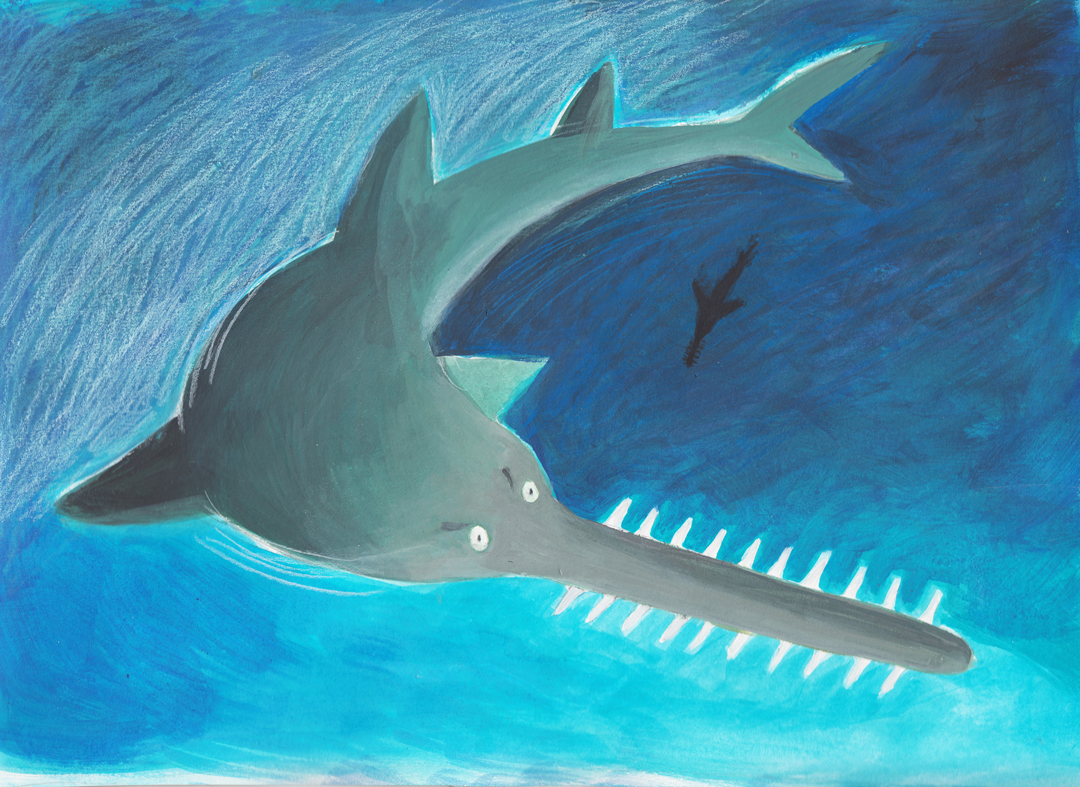 Image © Haydé Ardalan for the Save Our Seas Foundation

Throughout his work, Ramón has uncovered clues that point to sawfish historical and cultural significance in local communities and first nations groups.

In the small town of San Mateo Del Mar, Oaxaca in south-western Mexico, the Huave indigenous group host a religious celebration every year as part of the Corpus Christi festivities. For three days, the town’s residents parade around carrying alternating sacred icons with them. One of these icons, are two old largetooth sawfish rostra. The rostra are mounted into colorful headdresses and carried in front of a parade which brings together many community members.

In addition to this parade, there is another ancient tradition around sawfishes in San Mateo del Mar. A special dance named ‘Ikoots Mison Wajtat’ in which the capture of the sawfish by fishers is reenacted. “A kid wears a complete sawfish replica on top of him” says Ramón. ‘It’s really quite something. Other kids put on a show using nets and harpoons to try to catch the sawfish while a specific traditional song is played.’

Around San Mateo Del Mar other hints of sawfish cultural importance can be found through artwork.

‘On the walls of the schools you’ll find paintings and murals displaying sawfish,” Ramón explained. “I’m not sure how old these are, but it is clear that these animals hold some sort of connection to the people that live here. I hope to continue working in this community to better understand this connection.’ 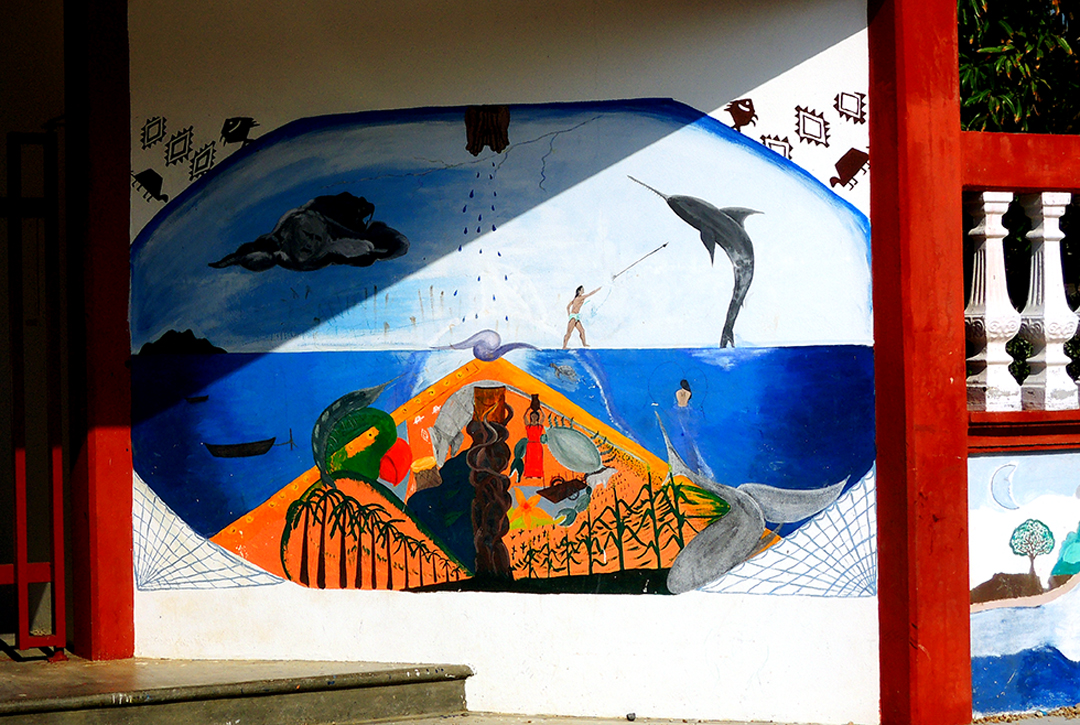 A wall mural in San Mateo Del Mar, Mexico, shows a sawfish being hunted as it leaps out of the water. Photo © Ramón Bonfil

Ramón believes that as sawfish continue to become more rare, these traditions and connections may be lost. He says the ‘sawfish dance’, and the significance behind it is starting to be phased out by the upcoming generation.

Once Ramón locates areas where sawfish aggregate in Mexico, he would like to involve local communities in supporting conservation efforts and become the stewards of sawfishes.

‘By selling the idea that these people have the last populations of sawfish in Mexico, they can become the guardians of sawfish, protecting them from further killing,’ Ramón explains. ‘In the future, I’d like to bring the people from San Mateo Del Mar and have them do their sawfish dance in localities where sawfish still survive. It would be fantastic to create a cultural event around the sawfish in these places. This can aid in tourism and allow the younger community to be inspired about nature.’

Ultimately, Ramón believes it’s up to the local communities whether or not these animals survive in Mexico.

‘Sawfish used to be culturally very important in places like San Mateo Del Mar. The parade, the murals, the dance. Now, it is difficult to understand why they were so significant.’ says Ramon. ‘I’m hoping to rescue these traditions. If the coastal communities where sawfish reside become involved in conservation they may be more inclined to protect these charismatic animals.’