Do stingrays have superpowers?

How do sharks navigate their way around the planet during long migrations? Scientists think they might be using the earth’s electro-magnetic field. By studying how captive stingrays (sharks cousins) respond to magnetic stimuli, Kyle aims to find out if the hypothesis is true. 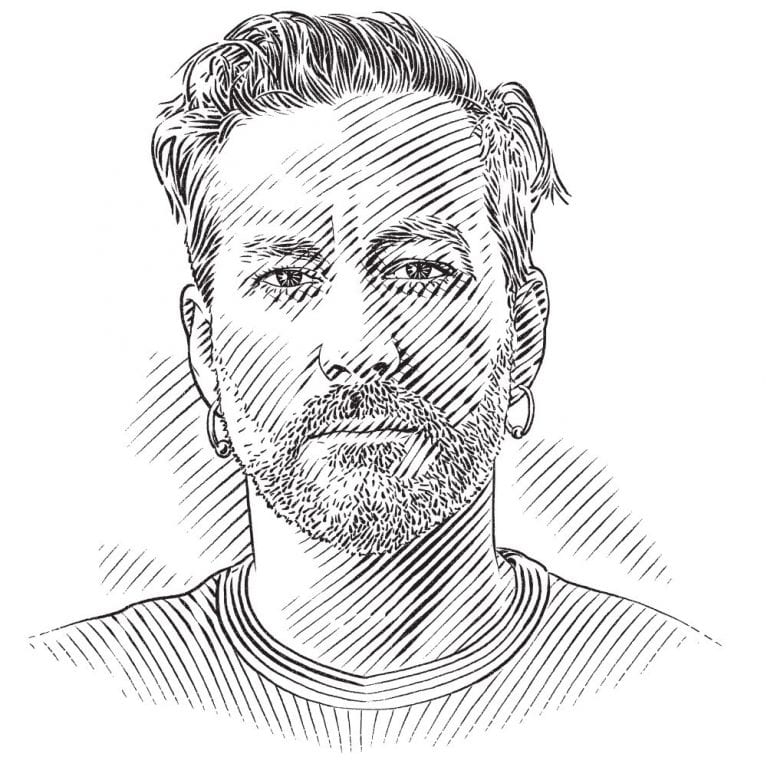 I grew up in the Pacific Northwest, where the water is way too dark and cold to even think about going for a swim. After watching a lot of documentaries about the ocean, I decided to study marine biology in Florida, which prompted me to get a scuba diving certification – in Seattle. Despite the freezing water and poor visibility, I was hooked. It seemed to me that underwater is the one place where life’s cares seem to melt away and this connection to the ocean has guided my circuitous career path ever since. 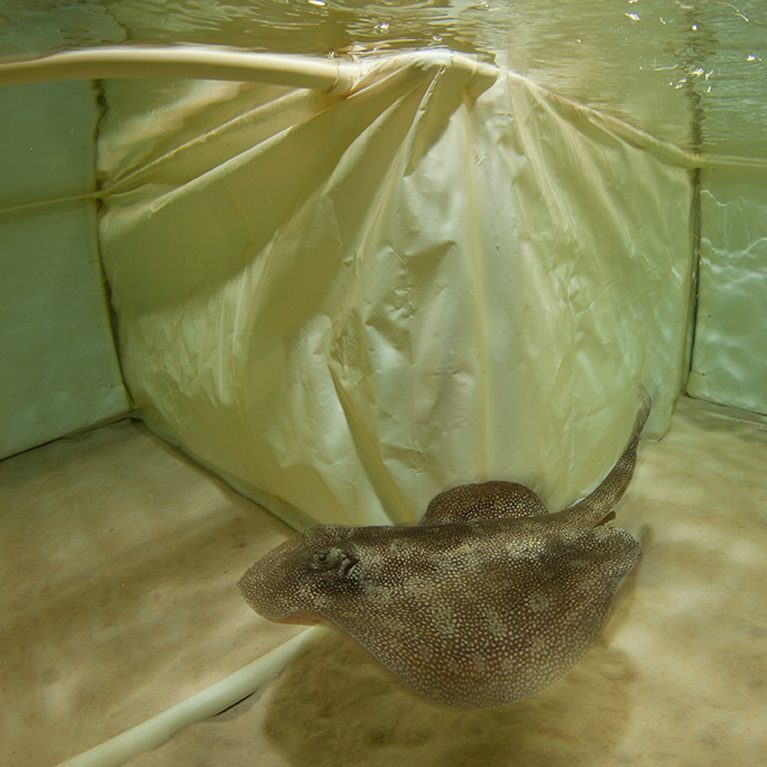 Rays in a T-maze
The following experiments are designed to understand if stingrays could use geomagnetic field polarity, or the difference between the north and south poles, as a directional cue to solve a maze task. Compasses use the polarity of the geomagnetic field to indicate direction so that… 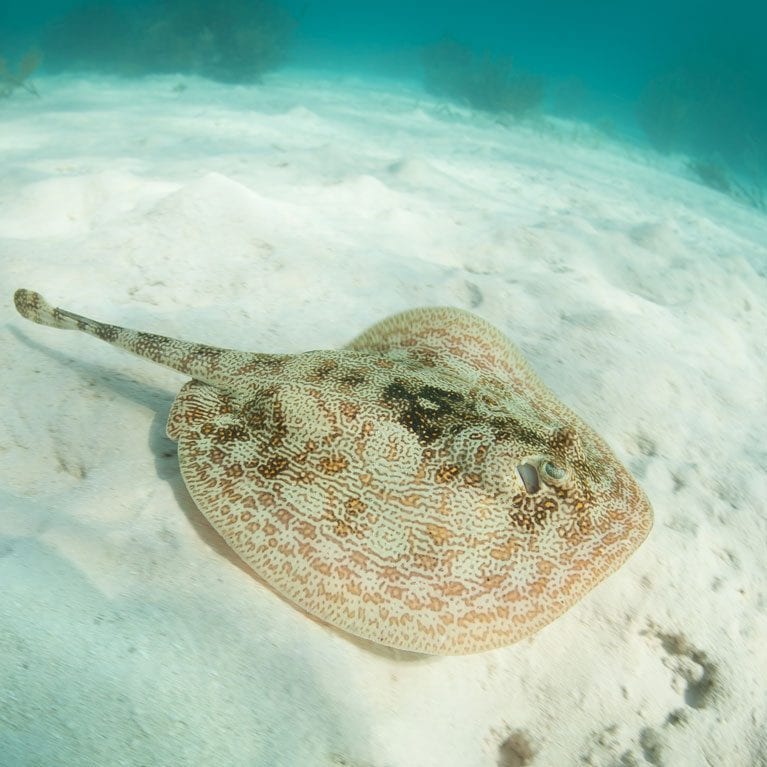 Knowing one’s place in the world
Nobody has ever tested whether a shark or ray can derive a sense of location using geomagnetic cues. The series of experiments I am conducting sets out to determine whether the yellow stingray can detect changes in the strength and inclination angle of the geomagnetic… 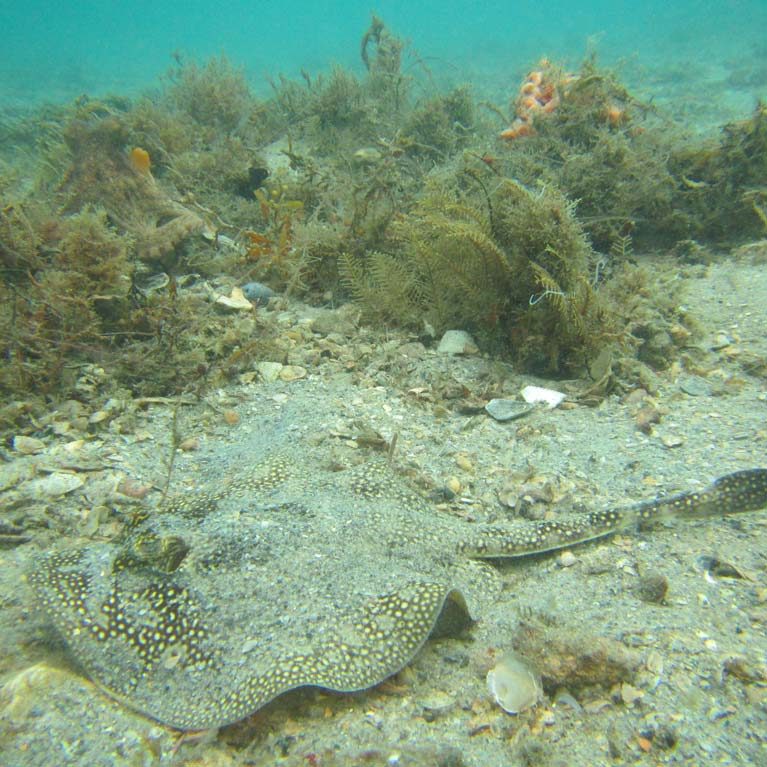 How do sharks get to where they want to go?
I study the migration, sensory and cognitive ecology of sharks and rays, which means that I want to find out how migrating sharks and rays know where they are and how they know what direction to swim in to reach a desired foraging or pupping…
Project details

Can the yellow stingray detect and use geomagnetic cues for orientation and navigation?

Florida Atlantic University’s (FAU) Southeast National Marine Renewable Resource Center is developing technologies that utilize the Gulfstream oceanic current as a source of renewable and sustainable energy. However, the environmental impact of such activities on the behavior of benthic and pelagic marine species is largely unknown. The yellow stingray is an ideal model species to study the effects undersea power generators on electrically and magnetically sensitive species. Elasmobranchs are known to bite and damage electrical cables but there have been no studies on the effect of magnetic fields from these cables on the orientation and navigation capabilities of these fishes. If stingrays and sharks use magnetic cues to orient and navigate then large undersea electrical cables could disrupt the migration of elasmobranchs along their traditional migratory routes.

The Earth’s magnetic field provides cues for marine organisms as they migrate between feeding, mating, and birthing habitats (Lohmann et al 2008). The strength and inclination angle of the geomagnetic field vary predictably with latitude and form isolines across the Earth’s surface. These isolines are oblique with respect to each other and create a unique combination of magnetic strength and inclination angle for each specific geographic location. Birds are known to detect either geomagnetic strength or inclination angle and can thus derive a general sense of latitude. Sea turtles and salmon can detect both of these cues and thus can derive a very specific sense of their location during navigation (Putman et al 2011, 2014). Most animals use small particles of magnetite to detect geomagnetic cues (Johnsen and Lohmann 2005). Elasmobranchs (sharks, skates, and rays) have an electrosensory system that detects the weak bioelectric fields produced by prey. Kalmijn (1978) hypothesised that as these fish swim in seawater through the Earth’s magnetic field that an electric field will be induced and detected by their electroreceptors. Therefore, elasmobranchs could potentially use the geomagnetic field to derive a sense of direction and position during migration. This project will use the magnetically sensitive yellow stingray as a model species to determine if the sensory ecology of larger benthic, pelagic, or endangered elasmobranchs could be adversely affected due to anthropogenic activities. We aim to describe the basic parameters and sensitivity of the elasmobranch magnetic sense, determine which cues sharks and rays use during migration, resolve if human activities could interfere with the migration of electrically and magnetically sensitive species, and contribute to the basic research on an IUCN data deficient species that is under pressure from a burgeoning aquarium trade, incidental fishing bycatch, and habitat loss due to coastal development.