A day of fieldwork in Papua New Guinea 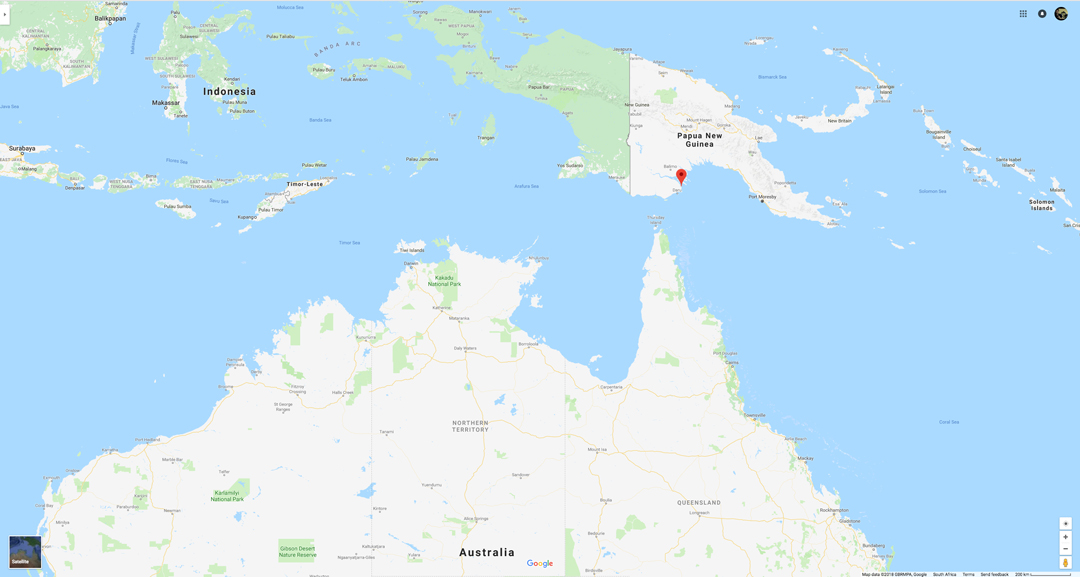 Sui Village, a small community situated on the southern side of the Fly River mouth, on the eastern coast of Papua New Guinea. Image © Google Maps 2018

We arrived at Katatai Village mid-morning to pick up our local contact, Jogara Page who is chairman of this village. Today’s adventure would take us to Sui Village, a small community situated on the southern side of the Fly River mouth. Sui is about 2 hrs boat ride from our accommodation at Daru, a small island that serves as the capital of PNG’s Western Province. 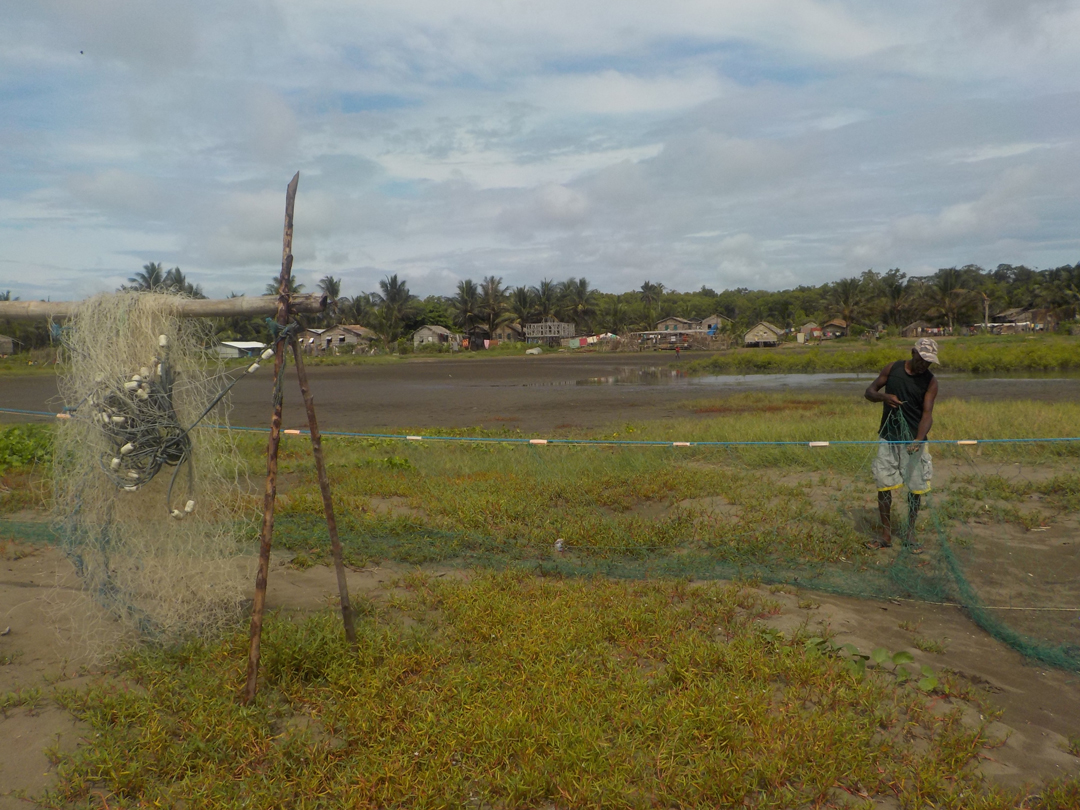 A fishermen at Katatai Village repairs his net at low tide. The fishermen generally set their nets close inshore at low tide, leaving them to soak during the raise and fall of the high tide. Photo © Michael Grant | James Cook University

Jogara has been assisting shark and ray research in PNG for 4 years. In 2014, while working with my PhD supervisor, Will White, Jogara provided parts from what at the time was the first specimen of an adult river shark, Glyphis glyphis, which was previously only known from juveniles in a few northern Australian rivers. Today however, we were investigating the presence of sawfishes along the coastline south of the Fly River. 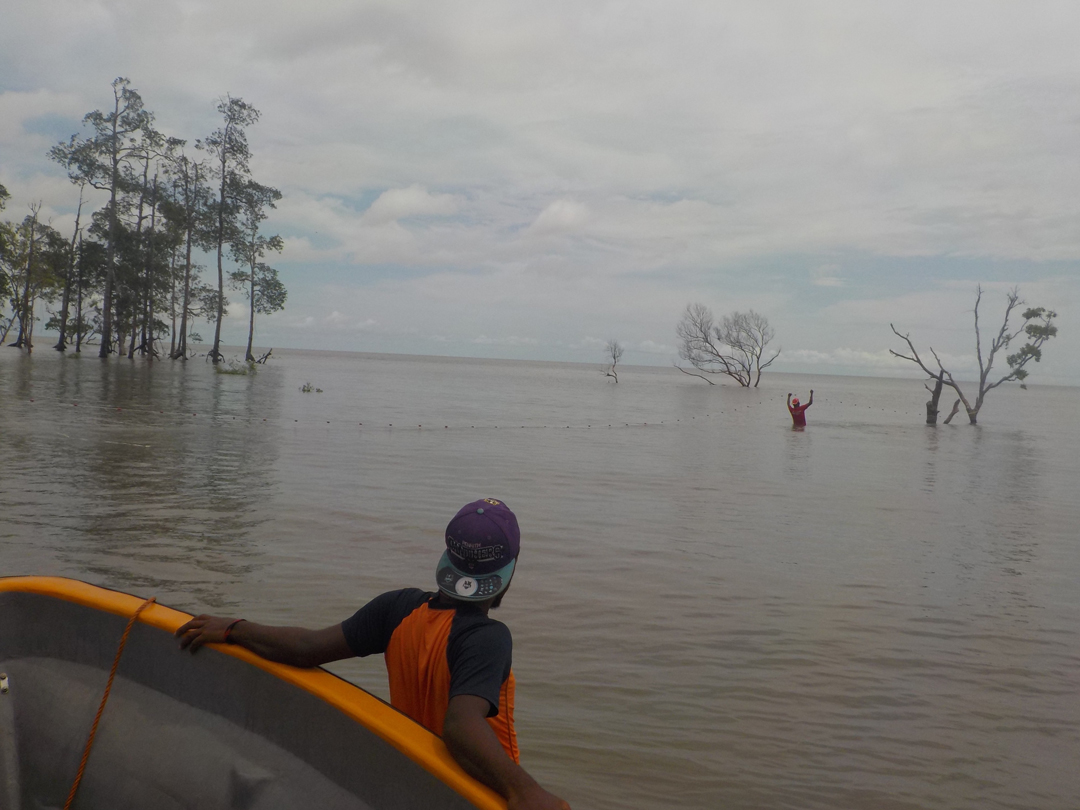 Our first goal was to visit the Geawi River, a small mangrove-lined system spilling out on the south eastern corner of the Western Province. We set a gill net perpendicular to the shoreline at the river’s mouth hoping to net a sawfish exiting the river with the ebbing tide. 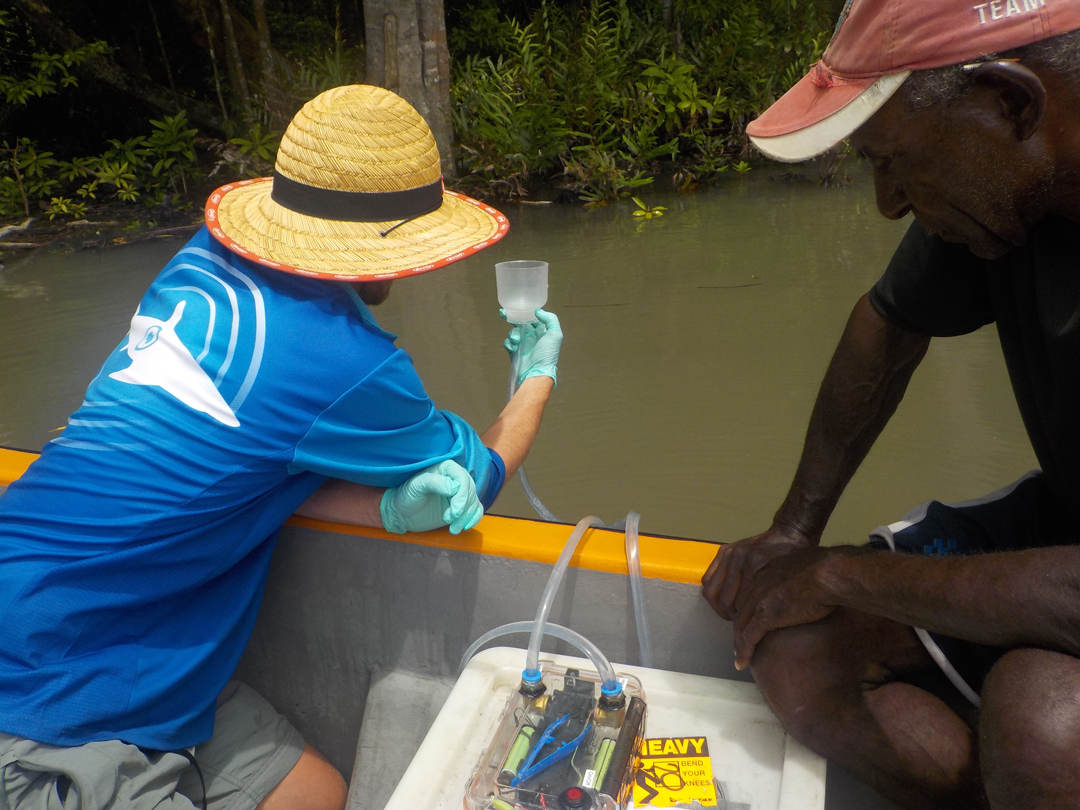 While the net was soaking, we made a brief excursion into the river to take an eDNA sample and fish a small tributary that Jogara had suggested. 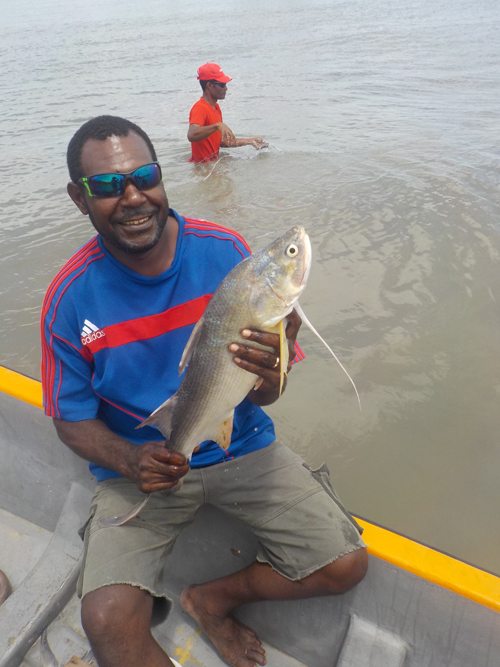 After a curious ‘bite off’ and a large eel, we headed back to check the gill net. No sawfish had been caught though much to the delight of Dick Jogo, the stand in Western Provincial Fisheries manager accompanying our party, dinner had been. 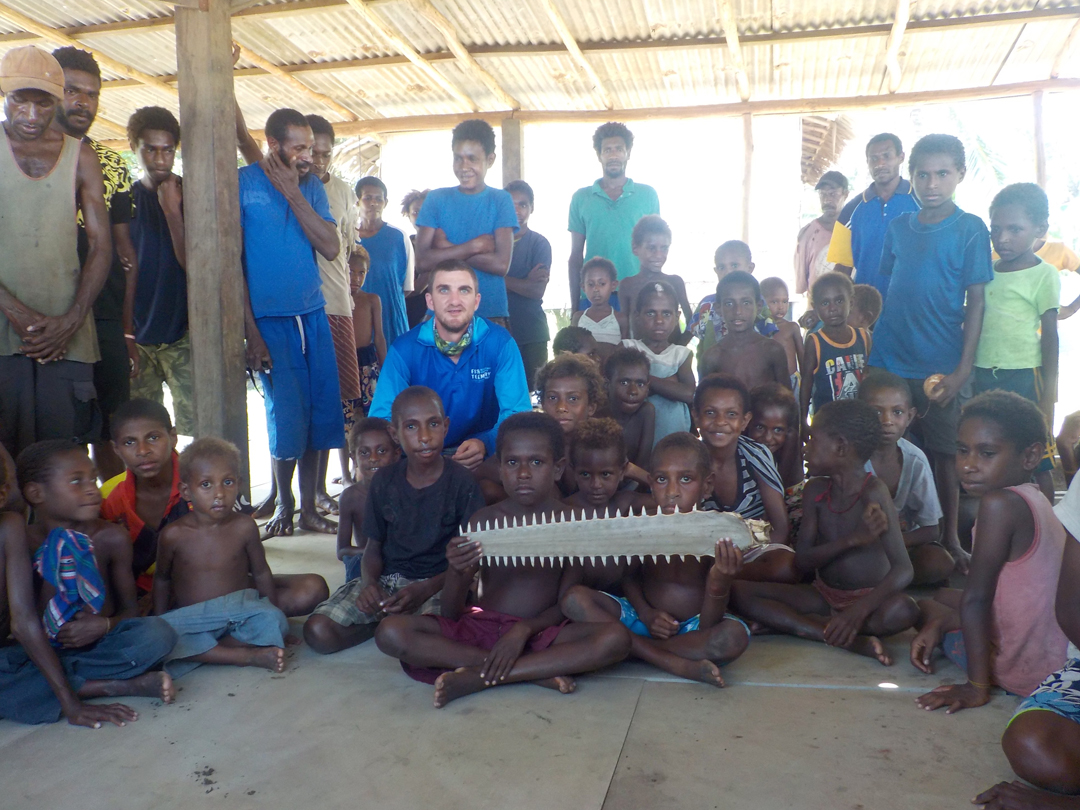 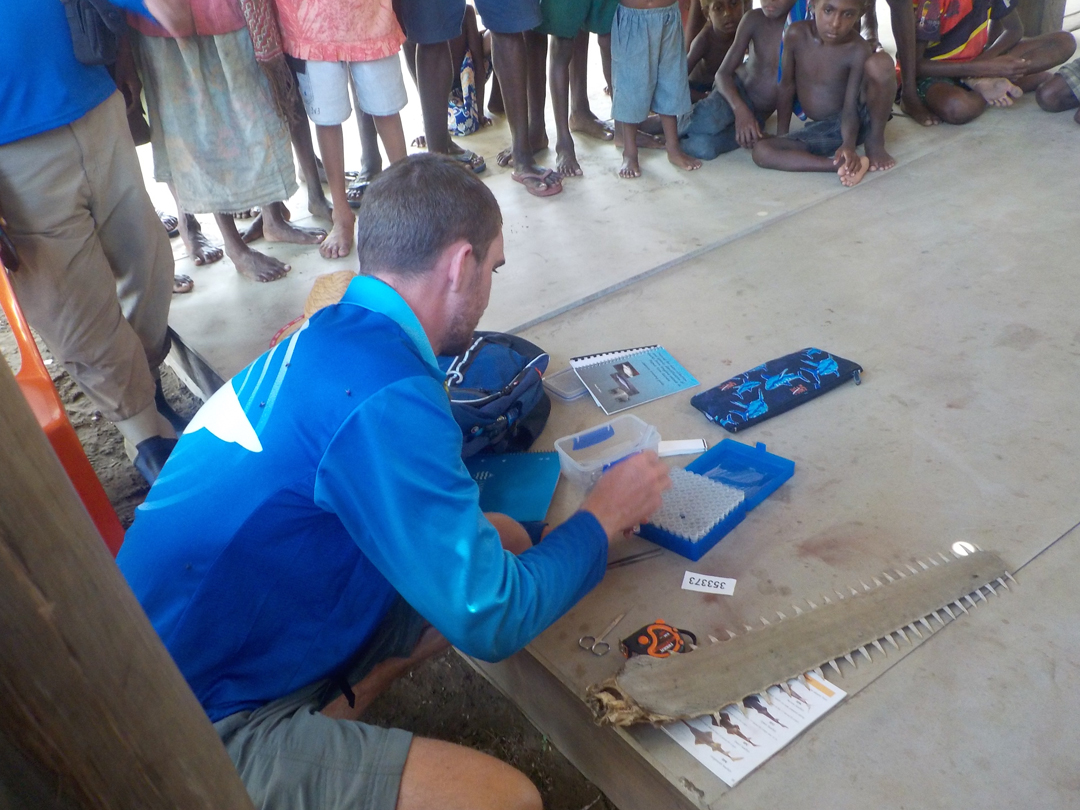 A large crowd came to watch the action as I took measurements and a genetic sample from this rostrum. Photo © Nigel Mapmani | University of Papua New Guinea

About an hour later we arrived in Sui. Jogara asked the Village chairmen if they had any rostra or shark fin we could observe as a large crowd gathered around us. Some fins and one medium-sized largetooth sawfish rostrum were produced. We were told ‘various’ types of sawfish were infrequently caught by the fishermen, especially when they ventured out to the islands dotting the Fly River Delta. 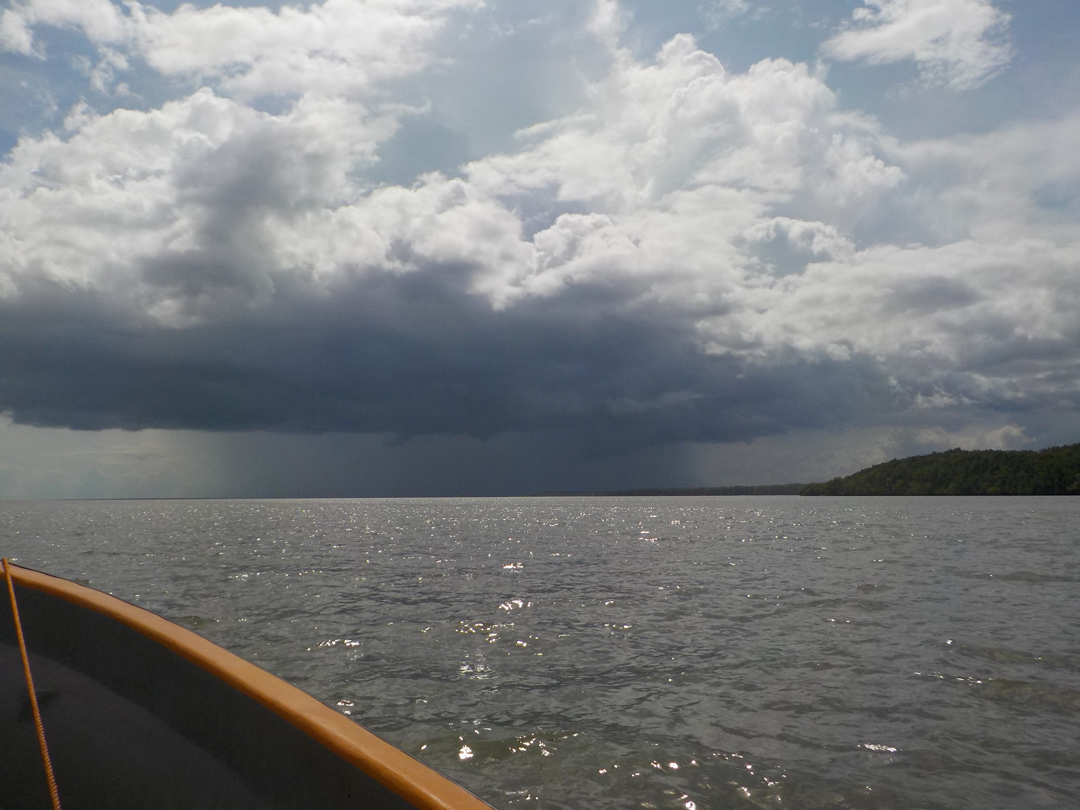 Mid-afternoon we departed Sui and headed back down the coast as a large monsoonal storm gathered in the distance. We briefly stopped at one of Katatai’s fishing camps to enquire about sawfish presence. Our visit was short lived though as the clouds began to swell and develop a deep black colour. 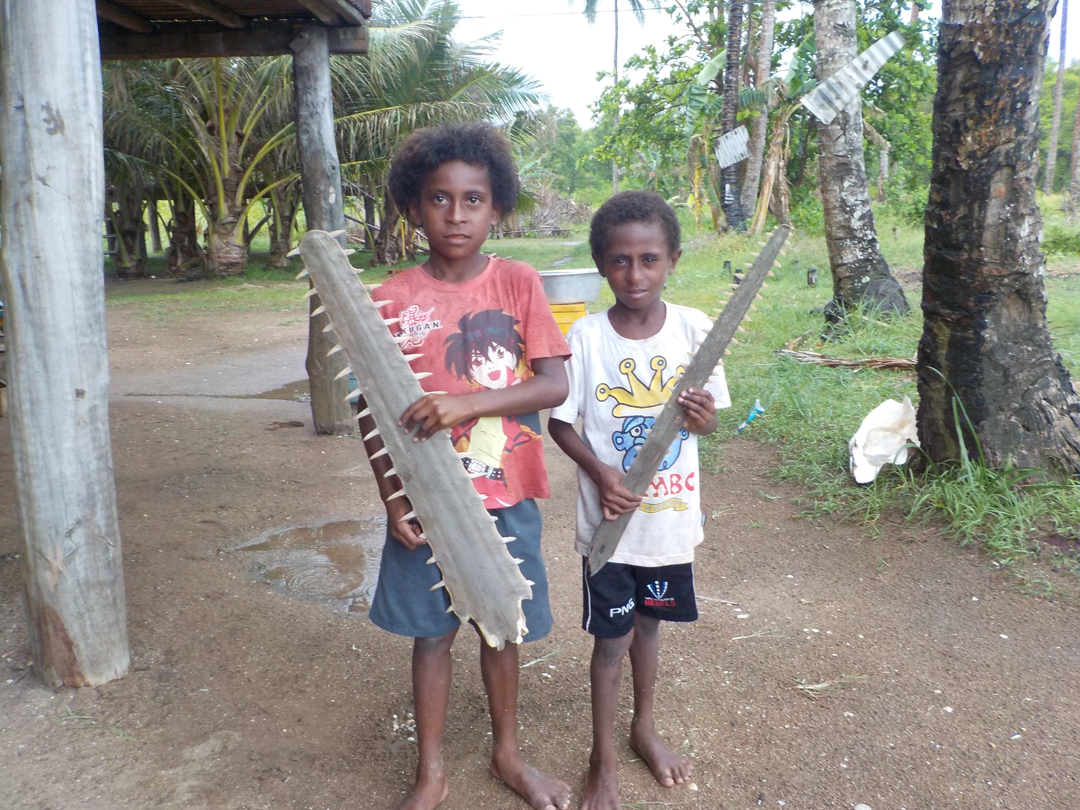 As the rain rolled through we were forced to wait out the storm at Kadawa Village before we crossed back over to Daru Island. This turned out to be a fortuitous detour. A largetooth sawfish rostrum was observed as well as a narrow sawfish rostrum. Several dried fins were also observed adding to our growing data on the species composition of PNG’s artisanal fisheries. Like Sui, the fishermen of Kadawa Village say that different types of sawfish are caught year round, though rarely on the shallow inshore tidal flats which are more commonly fished for prawn and barramundi. 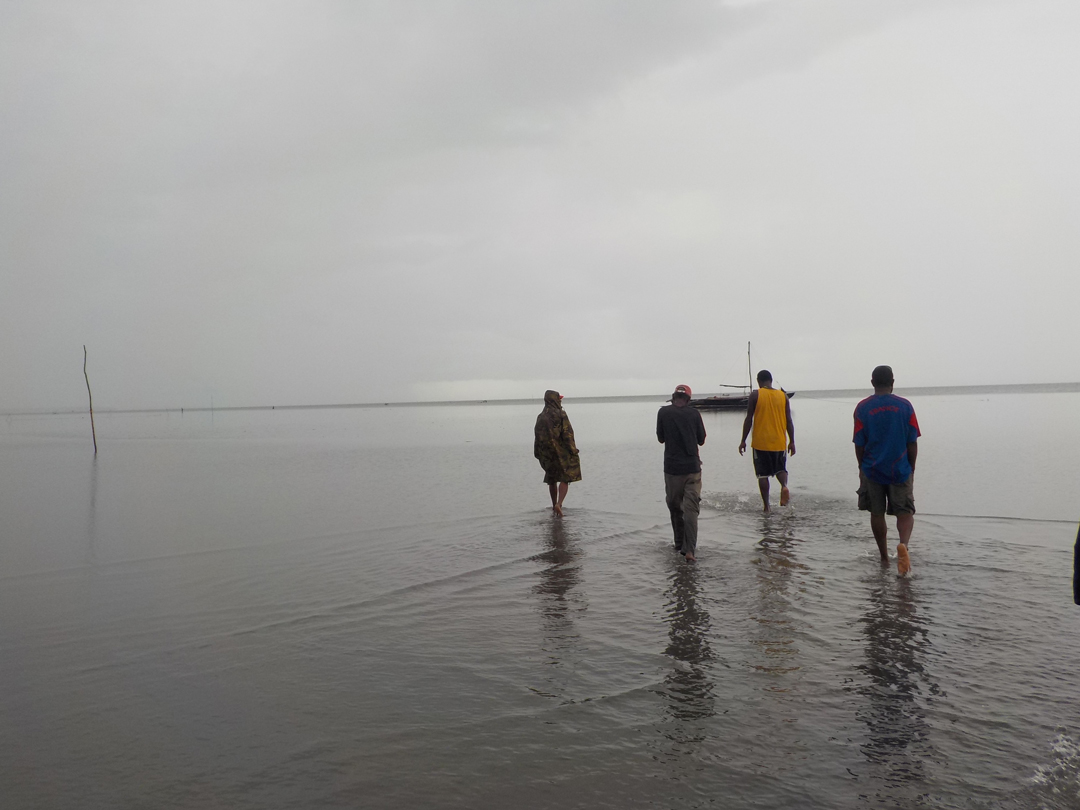 After the rain. The field team walks over the tidal mudflat toward our boat ready to return to Daru after a long day. Photo © Michael Grant | James Cook University

The rain had almost come to a stop as we shuffled through the spring tide back towards our boat. I was content that we had found two rostrums from the Critically Endangered largetooth sawfish and was optimistic that there were more to document in the days to come as we continued our survey along the South Fly Coast.

Read Michael’s first update from the field in PNG here.