Conservation research is failing sawfishes if its outcomes are never communicated to those with the power to take action to protect sawfishes.

A scientific paper by Alifa Haque, Aparna Riti Biswas, and myself has been published today (Publish, then perish? Five years on sawfish are still at risk in Bangladesh) which reveals that over 14 months, 25 sawfishes (most of them largetooth sawfish) were landed at just four fish landing sites in the south-east of Bangladesh. This is invariably an underestimate of the actual number caught by fishers in Bangladeshi waters over that period, since only a subset of the country’s landing sites was monitored for the study. Nonetheless, this number clearly shows that largetooth sawfish still inhabit this region and are numerous, relative to many other parts of the world (for example in West Africa, where sawfishes were once common, many fishers have gone years without seeing or catching one). But perhaps more revealing, it indicates that despite their protected status under Bangladeshi law, sawfishes continue to be caught and landed by small-scale and industrial fishers. 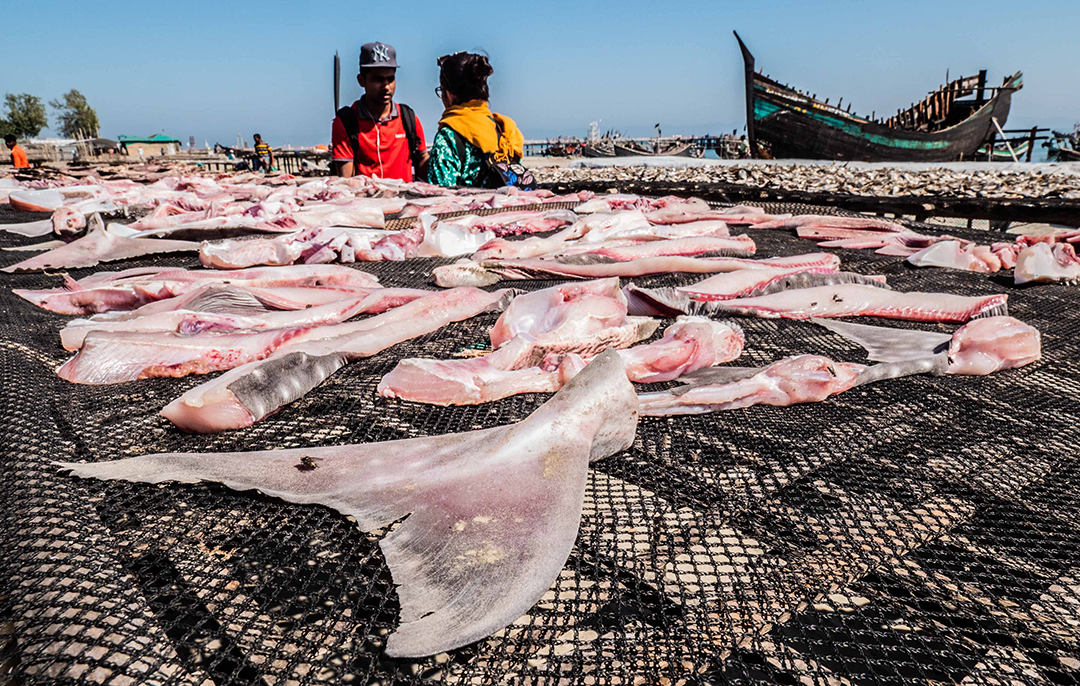 Alifa Haque (in the background, talking with a fisher) interviewed fishermen and fish traders to collect data on sawfish landings. In the foreground, strips of meat and the fins of guitarfish, closely related to sawfishes, are laid out on a rack to dry before being sold. Photo by Oliver Deppert | © Save Our Seas Foundation

A study conducted five years before Alifa’s field research had already documented the presence of sawfishes in Bangladesh. Following that study, however, no action was taken to address the threats facing sawfishes in Bangladesh or to communicate the urgent need for conservation action to relevant groups such as government departments responsible for conservation, and the communities involved in catching sawfishes. When the results of research on a Critically Endangered and increasingly rare species like the largetooth sawfish fail to translate into management and conservation actions in the real world, then that research is failing in what must surely be its primary objective – to halt the decline and eventual extinction of that species. Do we as a research community really want to continue to document the value and beauty of our planet’s biodiversity, even as it disappears before our eyes? 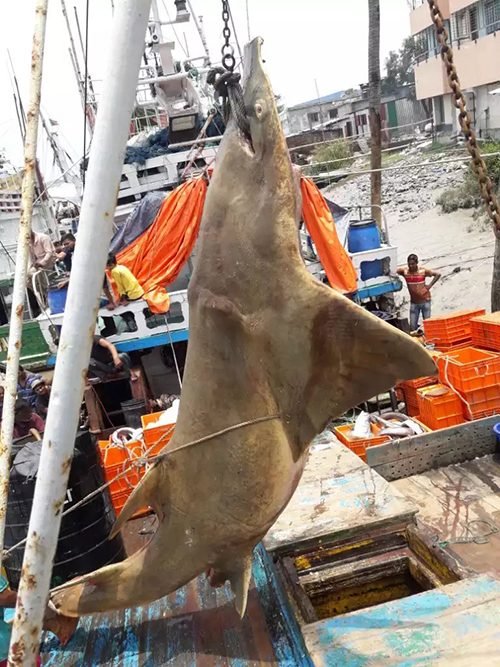 Largetooth sawfish landed in Khulna in June 2018; the rostrum (saw) had been cut off by the fishers. Image sent anonymously to Alina Haque by one of the traders in the reporting network.

With this paper, we wanted to do something different. We wanted to break away from the pattern we have seen so often in the research world – conducting the research, publishing its results, and assuming that our work as scientists ended there. Despite dramatic declines in sawfish populations worldwide, they are thought to still be present in at least 52 countries including both industrialised nations like Australia and the USA, and low-income countries like Bangladesh. The threats sawfishes face, and the types of actions needed to reduce those threats will be very different in different places. So, we used our understanding of the lives, economic circumstances and culture of coastal communities in Bangladesh to develop a locally relevant action plan that we believe has a high likelihood of reducing sawfish mortalities. That action plan is laid out in the paper. Amongst other things, it involves developing a social marketing campaign to address the widely-held belief in Bangladesh that shark and sawfish meat can cure cancer, and a national programme to encourage fishers to release sawfishes from their nets, alive.

Many researchers make recommendations to halt declines in threatened species, in their publications. But if those recommendations stay buried in a scientific journal, they will have no impact in the real world. And if those recommendations are not based on a solid understanding of the people whose involvement is needed for conservation actions to be truly effective, then those actions will be unlikely to succeed. We wanted to avoid falling into that chasm – the ‘research-practitioner divide’ – between research and the real world. So, we also developed communications products to share the key results and messages of our study in an accessible and appealing way, with diverse audiences, especially government authorities, conservation groups and coastal communities in Bangladesh. We developed a simple, one-page graphic summary of our publication, highlighting the urgent need for conservation measures for sawfishes in Bangladesh, and bringing to life the actions we believe are likely to reduce sawfish mortalities in the short-term. We also developed some posters that will be shared on social media and in communities where sawfishes are landed and where their meat is sold, to dispel the widespread myth that shark and sawfish meat have medicinal properties. 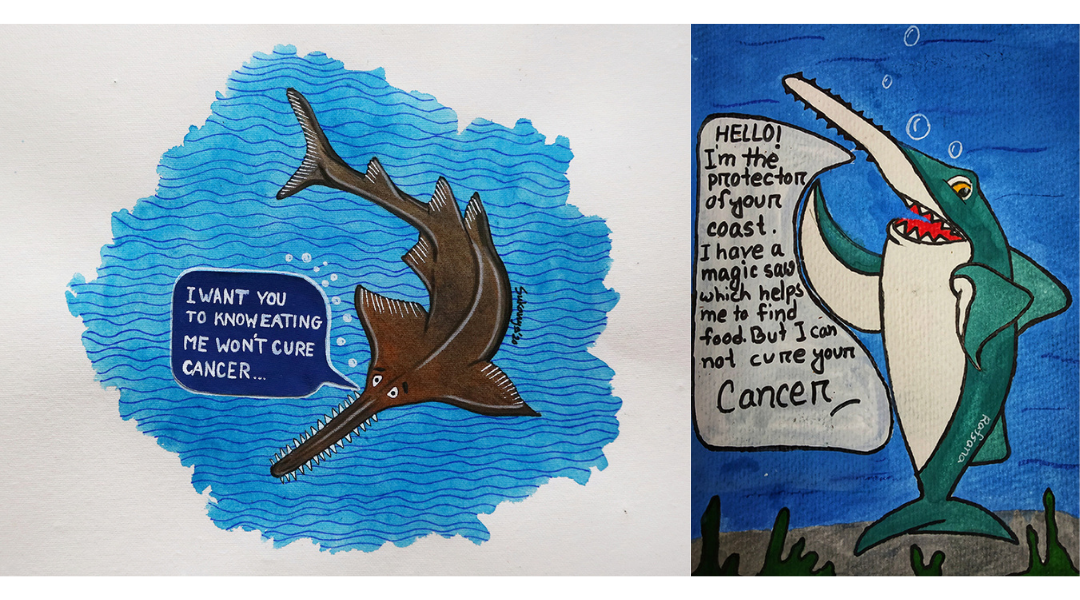 Posters developed as a part of this study will be used to educate communities who consume sawfish and shark meat because they believe it has curative properties. Bangla versions of these posters will be printed and displayed in shark landing sites and market areas where sawfish meat may be sold. Artwork (left) by Sukanya Hasan and Artwork (right) by Rafsana Rahman Tista.

We hope that by committing to communicating our research to government, communities and conservation groups, and through the carefully considered design of sawfish conservation actions which are locally relevant and feasible, we can encourage a sense of stewardship for these most unique and rare inhabitants of Bangladesh’s waters. And we encourage other conservation biologists to think beyond publications – share and discuss your research in creative ways, with the people whose actions can take us from failing species to saving species. 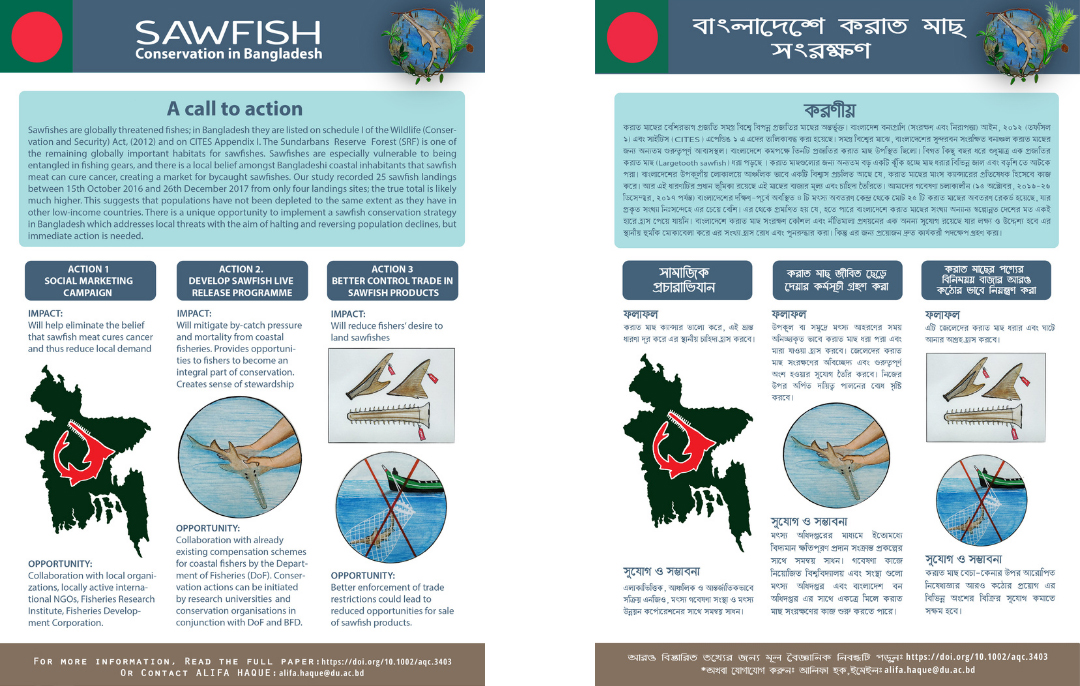 The full paper is published as: Haque AB, Leeney RH and Biswas AR. 2020. Publish, then perish? Five years on, sawfishes are still at risk in Bangladesh. Aquatic Conservation: Marine and Freshwater Ecosystems. https://onlinelibrary.wiley.com/doi/full/10.1002/aqc.3403