Today we are celebrating World Manta Day – a full day to raise awareness for and show appreciation of these gloriously mysterious creatures. Save Our Seas Foundation couldn’t be more excited to join our partners at Manta Trust in the celebration of our flappy friends! 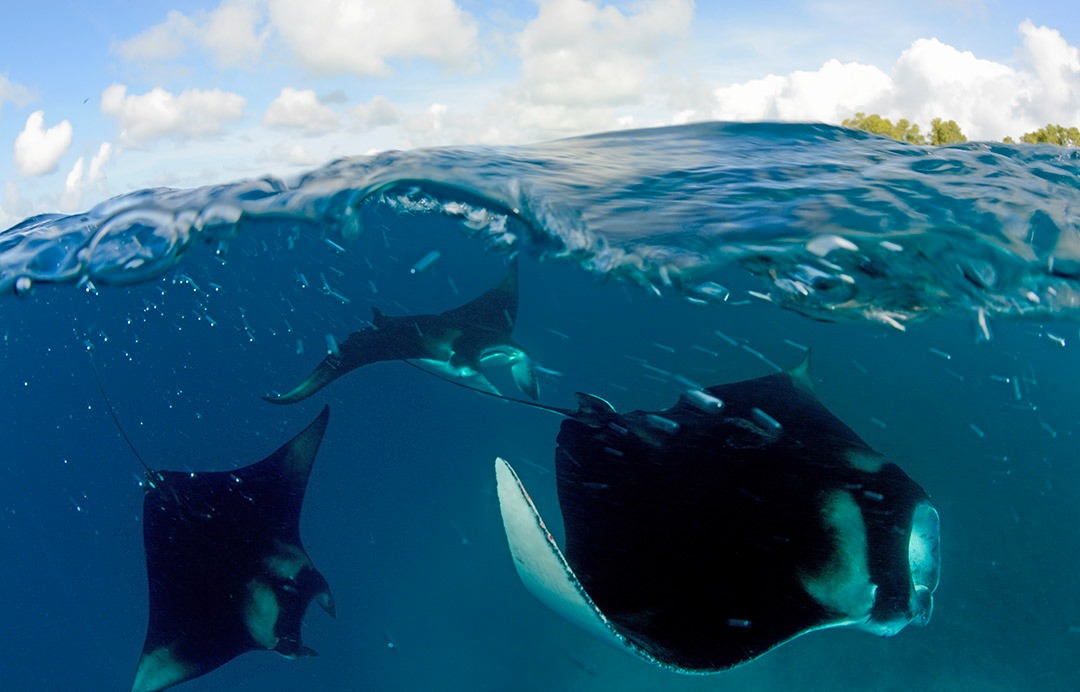 Manta's swimming just off the shore of D'Arros Island. The cleaning station at the coral reef is frequently visited by the manta rays. Photo © Dan Beecham

‘Manta‘ means blanket or cloak in Spanish, describing the look of their large, flat, diamond-shaped bodies, which are characterised by triangular pectoral fins. Manta rays have two horn-shaped fins protruding from the front of their heads (cephalic lobes), which have also given them the nickname ‘devil fish’. But despite their huge size (some reaching a wingspan of over seven metres) and this ominous nickname, mantas feed on microscopic animals called plankton and are amazingly docile creatures loved by scuba divers and snorkelers alike.

Manta rays have a skeleton made of cartilage rather than bone meaning they are close relatives of all sharks and rays. Similar to whale sharks and basking sharks, manta rays are also filter feeders and will often be found in similar areas to whale sharks, sometimes even feeding side-by-side. 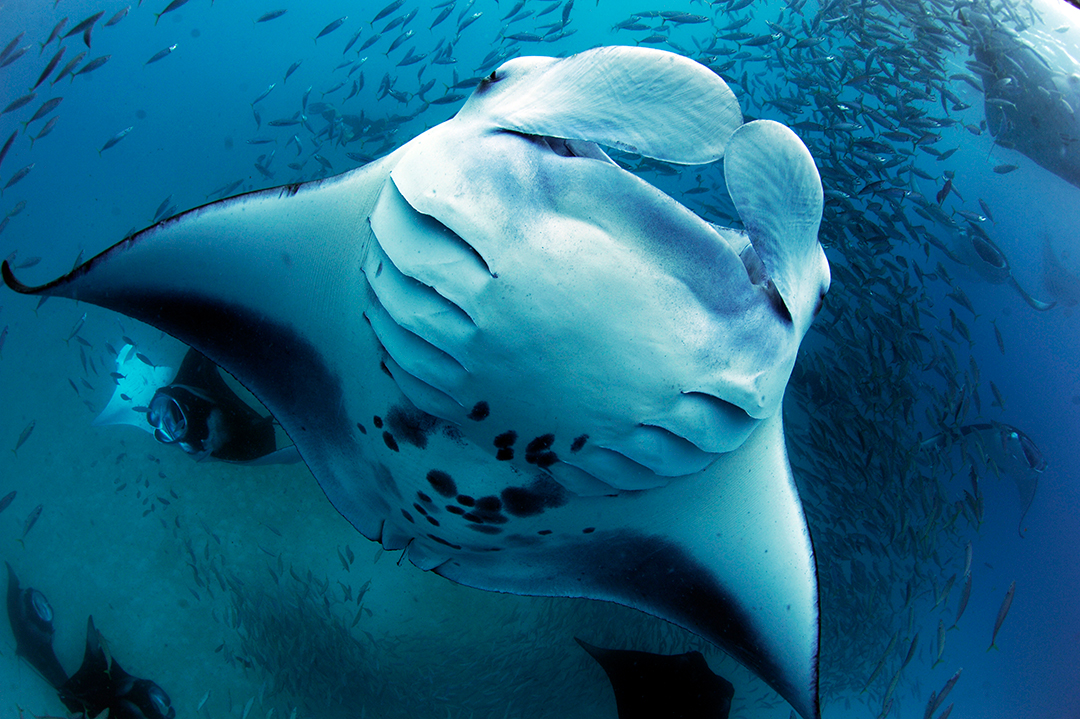 Two species of Manta ray have been identified within the family –  reef manta rays and oceanic manta rays, which can be distinguished by the differences in the patterning of their skin and their behaviour. However, in both species, each individual is identifiable by the unique spot pattern found on their underbelly. Researchers use this to identify individual manta rays the same way that we use the human fingerprint.

Mantas are found throughout the tropical and sub-tropical oceans of the world with each species staying true to their namesake – reef mantas spend their lives largely resident to certain reef habitats in shallow or coastal areas, while oceanic mantas are much more transient visitors that travel the open ocean. These animals never stop moving, as they must keep water flowing over their gills to breathe. Their daily and seasonal movements are tuned to the ebb and flow of the ocean currents that carry the planktonic food upon which they depend.

Why do manta rays need their own day?

Sadly, manta and devil ray populations around the world are under threat and their numbers are falling in many regions. The IUCN has listed both the reef manta and the giant manta rays as Vulnerable and they have been listed on CITES (the Convention on International Trade in Endangered Species of Wild Fauna and Flora), an international agreement between governments to ensure that international trade in specimens of wild animals and plants does not threaten their survival, to bolster their conservation management.

“We hope to use World Manta Day to spread the word about manta rays far beyond the conservation and scuba diving world,”
– The Manta Trust said, in an announcement. 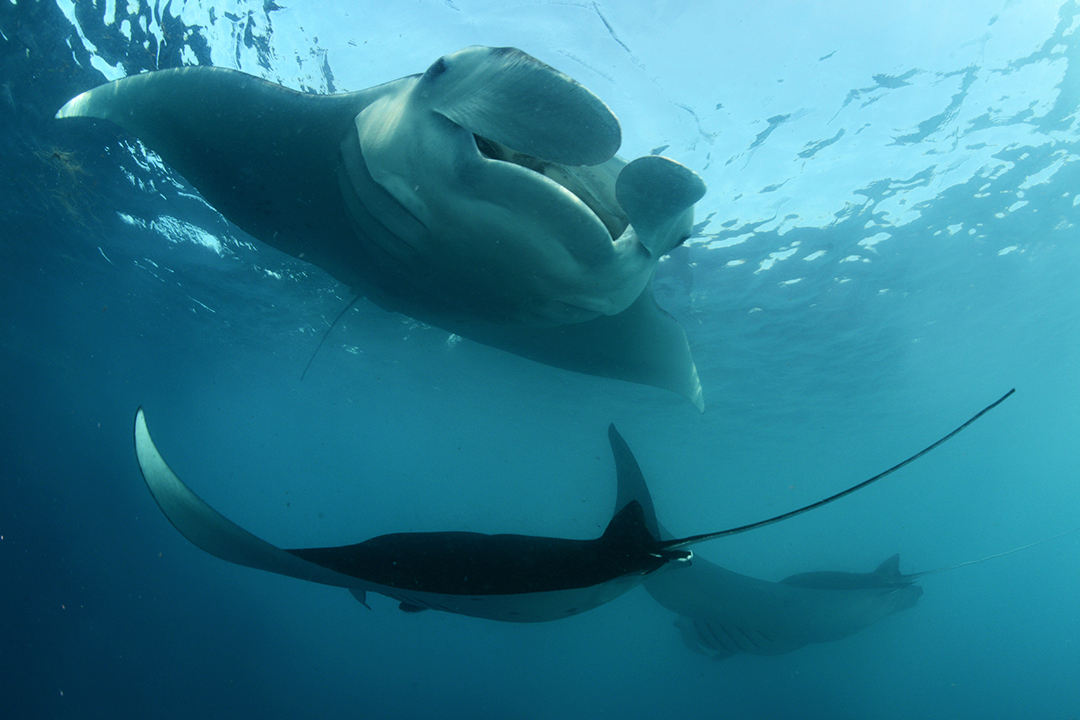 What is being done to help manta rays?

Having started in the Maldives, the Manta Trust is now active in about 16 countries worldwide promoting the conservation of manta and devil rays and their habitat through research, awareness and education. Three of its current major operations are the Global Mobulid ID Project, which aims to provide a taxonomic, morphological and genetic identification guide to manta and devil rays; the collection of data about ray landings in India, which will inform conservation management in that country; and the Indonesian Manta Project, which works to promote an appreciation of manta and devil rays among local people.

The Save Our Seas Foundation has supported the Manta Trust from the outset, not only providing funding and guidance for its projects but also facilitating international cooperation among manta researchers to forge a global conservation plan of action. 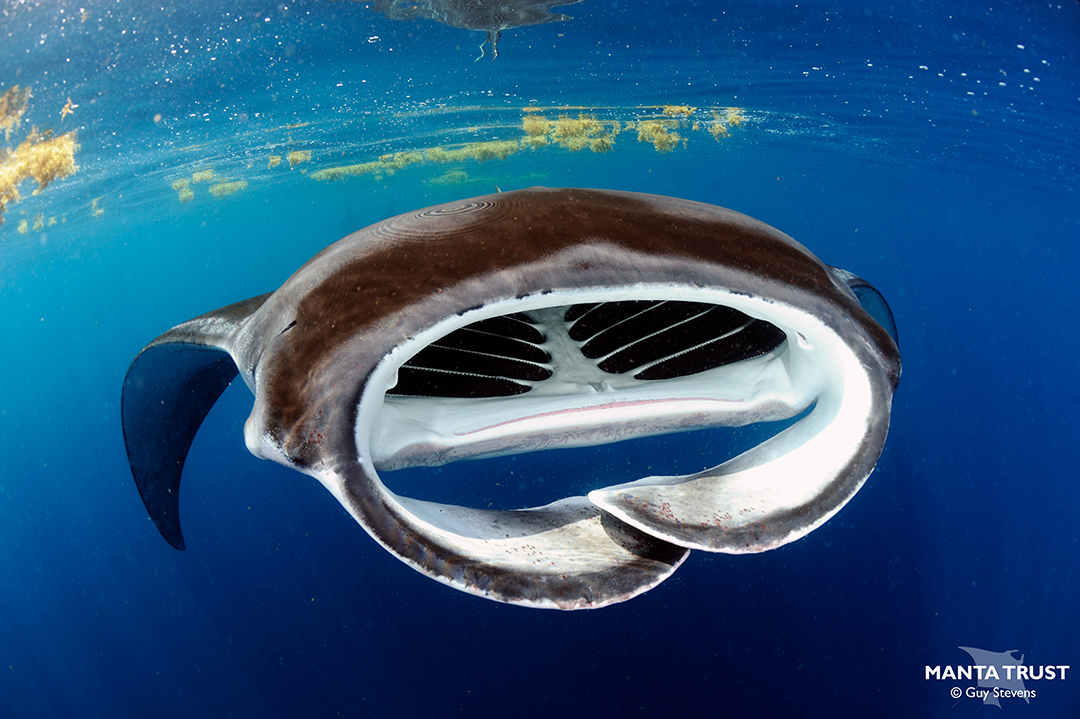 What can you do to help?

By educating yourself about marine conservation and the wonderful world of manta research we encourage you to become an advocate for mantas and share what you’ve learnt today with friends and family. You can also work to reduce your impact on our oceans by following these simple steps, and maybe even at supporting local organisations that are working towards making our oceans cleaner, safer and healthier through research, conservation and education. Follow Manta Trust for the latest news in manta ray research, conservation efforts and to see how you can help them. 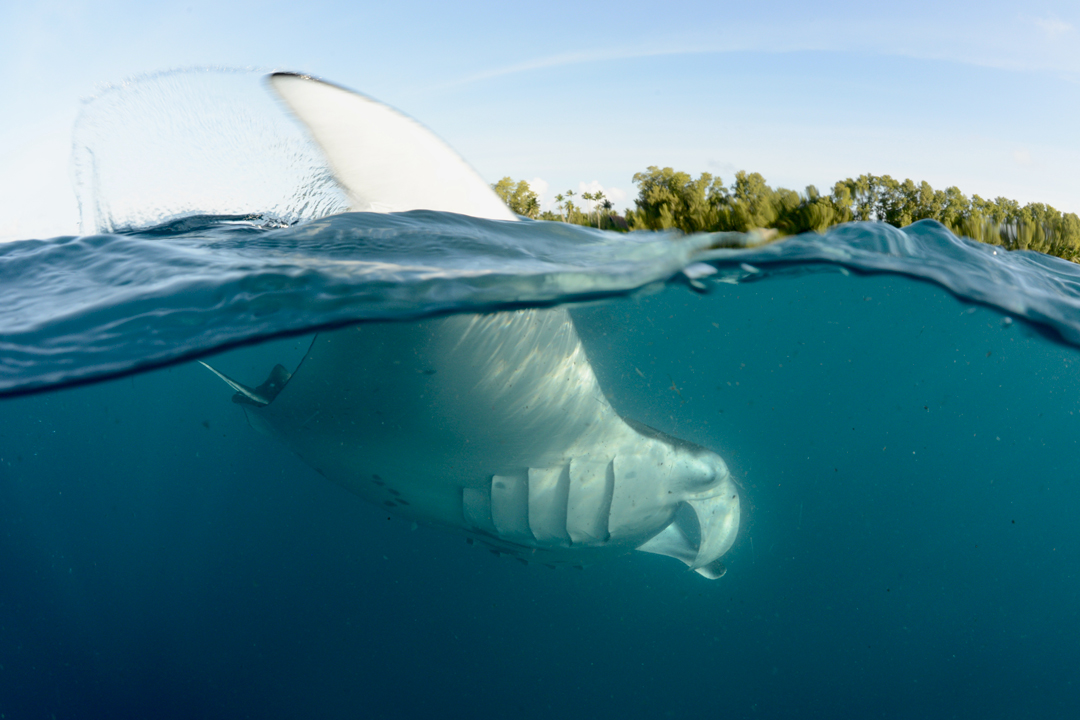 A manta breaks the water's surface, the trees of D'Arros island can be seen in the background. Photo © Dan Beecham