With an increasing number of threatened species worldwide, we are seeing the implementation of national and international laws to help curb further decline. However, if these laws are not properly enforced, they will mean next to nothing. One threat facing a variety of taxa is the wildlife trade. In order to properly enforce any legislation preventing the illegal trade of protected species, two of the most important questions to address are: what species is it (is it protected?) and where did it come from? Often, these seemingly straightforward questions are extremely difficult to answer. Enter wildlife DNA forensics. In situations where the evidence must be indisputable, i.e. in law enforcement, this relatively new application of conservation genetics can be successfully used.

Sharks and mobulid rays are heavily fished for their fins and gill plates respectively. Both items are destined for Asian markets where in the case of gill plates, researchers have recently reported an increase in demand. In March 2013, five species of shark and two species of manta ray were listed on Annex II of the Convention for International Trade in Endangered Species (CITES) to help control and manage the international trade of their body parts. This was a monumental success and MUST be properly enforced come September 2014 if it is to mean anything.

This week, I have been helping to survey some of the largest fish markets in Sri Lanka, notorious for their high catches of mobula and manta rays. To the untrained eye, it is not easy to tell the difference between species, especially once their gill plates have been removed and their bodies hacked up into pieces. This was also demonstrated last week when a widely read BBC news article described a photograph of Mobula munkiana as Mobula thurstoni. 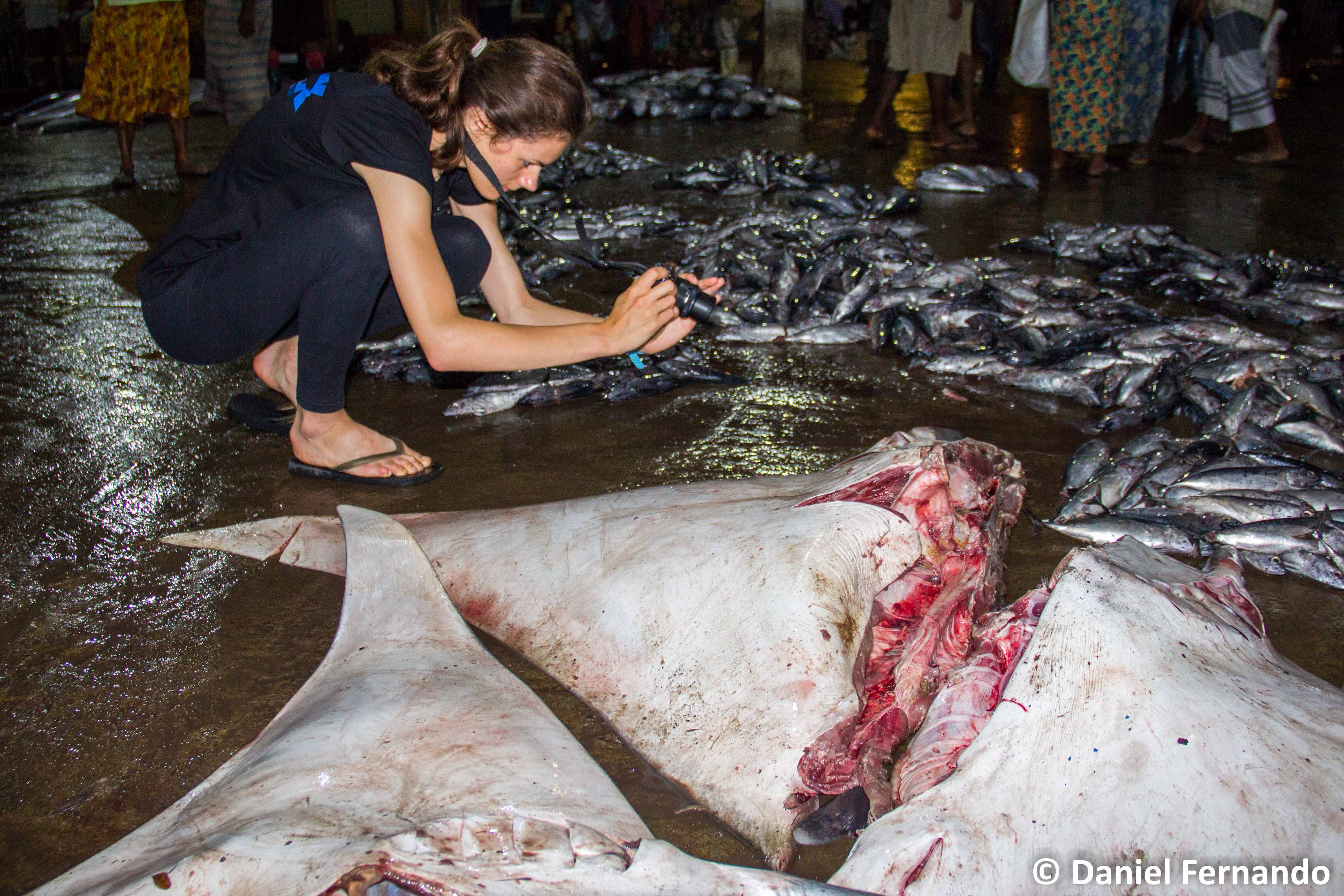 Wildlife DNA forensics is the application of conservation genetics techniques to address the former, however similar genetics techniques can be applied to address the latter. Both are extremely important. After all, effective fisheries monitoring can provide an understanding of how many of each species is being caught; what regions are contributing most to the gill plate trade; and the main region a certain species is coming from. Without knowing such things, we cannot even begin to make informed management decisions or produce strong cases for legislation. However, come September when new CITES regulations come into place, customs officials must have access to effective tools for specimen identification and traceability in order for issue number one to be addressed. So — think CSI with a twist. Wildlife forensics has benefitted from the spillover of techniques and analysis used in human forensics but instead of individual based identification, we can use DNA to identify a species to see whether it is protected or not and if further action must be taken.

To be able to do this, one must use a section of DNA that is known to vary between different species but stay pretty much the same within a single species (e.g. a sequence that is the same in all reef manta rays, but different in oceanic manta rays). This is called a DNA barcode. Mitochondrial genes are known to change at around about the same rate at which species evolve and so these genes are often used for species identification. What’s also good about the mitochondrial genome is that it has many copies in each cell making it easier to obtain the sequence of DNA that we require, especially when dealing with animal parts that have been degraded and treated in all manner of ways. Once we have the sequence from the unknown species, we can put it into a reference database that can tell us what it is. 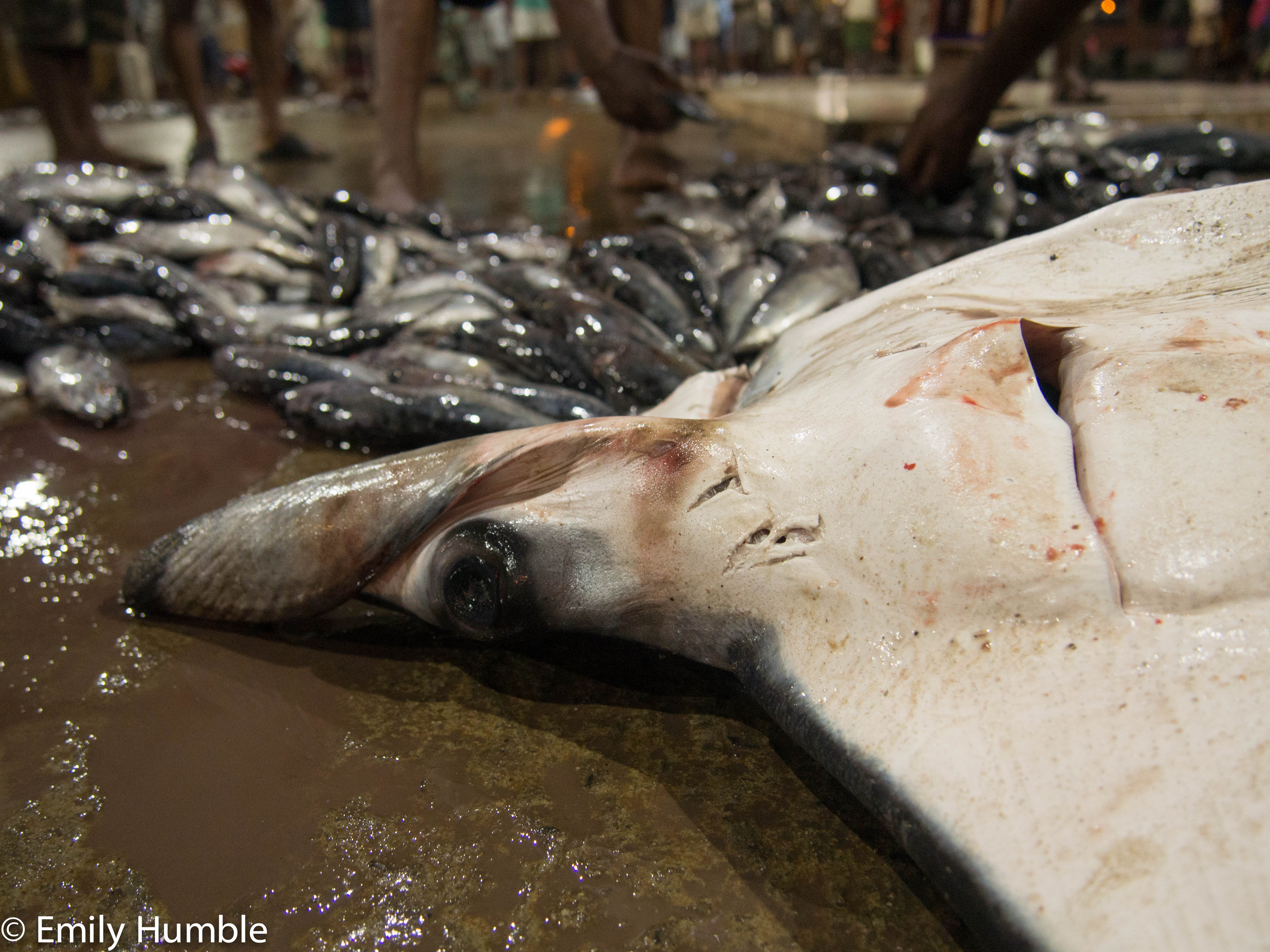 A quicker and less expensive way to detect a species, which is especially useful when we want to know if a certain species exists in a product that may have a whole bunch of other species in it as well, is to use a technique which will only end up sequencing a bit of DNA if the target species is present. However, this technique is not as reliable as DNA barcoding and can result in misidentification. Therefore, this method is often used to detect the presence of a species within a mixed sample, whilst DNA barcoding is used subsequently to confirm the species identity. Such a combination of techniques have been used successfully to identify marketed shark body parts. However, whilst getting cheaper as technologies improve, genetic testing remains relatively more costly and time consuming than other methods, yet can provide the all important confirmation that may be required in scenarios requiring prosecution. This is why genetic methods for species ID are extremely vital and should be used in conjunction with methods such as visual guides.

Wildlife legislation usually occurs within regional or national boundaries. However, the distribution of a species does not necessarily conform to this — obviously. Therefore in these cases it will be necessary to identify the region from which a species is from to determine who will carry out the enforcing. In order to be able to do this, we basically need to know which population an individual was born into. Sometimes, populations of a species rarely mix at all and this leaves a very strong genetic signature that we can detect. However, in migratory oceanic species, such situations are rare. There are different genetic methods used according to the differing degrees of population segregation.

For populations that are highly divergent we can look at another section of the mitochondrial DNA, called the control region, which can be used to identify populations, similar to species identification. If a specimen’s mitochondrial DNA control region matches that of a given population, we can be pretty certain that it has come from that population. However, when populations are not so discreet, this genetic variation breaks down and we must instead look at finer variations. One could imagine this as the difference between comparing blue and green (separate populations), and comparing different shades of turquoise (mixing populations).

Nowadays, even fancier methods are available to us, making it possible to scan the whole genome to identify regions that are specific to local environments due to the advantage they give that population. This obviously depends on different populations experiencing differing environmental conditions. Regardless of which method is used, for the unambiguous identification of region of origin, it is important that we have genetic data from as broad a representation of populations as possible. This is hard for threatened and endangered species as such data is difficult to collect.

Application of these methods to tackle the trade of shark fins is well underway. The Manta Ray Genetics Project and the Global Mobulid ID Guide Project, both Save our Seas Foundation funded projects, are now working together to enable genetic testing of gill plates and tissue samples, whenever required, for the enforcement of CITES and other national regulations. Initially, wildlife forensics will only be applicable to the two manta species as they are currently the only CITES listed mobulids however, our methods will also enable researchers to gain a much better understanding of the state of play for mobula rays. In my opinion, this is likely to be a worrying one.