Tracking a turtle: what worked and what didn’t

Since my last update, something has changed: turtle Marco Dalla’s prototype started to work – more or less. As I said in the previous post, the logger didn’t send a signal at first, but after a few weeks we started to receive data. We don’t know what actually happened during the first days after Marco Dalla’s release, but now we can confirm that the GSM network works well at sending information, even from areas quite far out at sea (we received an SMS when the turtle was about 20 kilometres from the Italian coast!).

Just before the release of Marco Dalla. Photo © Dimitri Giunchi

The bad news is that the GPS is not working as well as the GSM. It seems that the GPS system used by the prototype (which was created by modifying a bird logger) is neither the best nor the quickest method to detect the position of marine animals, which come to the surface to breathe for only a few seconds. This is because the GPS is dormant when underwater and can operate only when it is completely dry. It then needs about another 40 seconds to pinpoint the animal’s position.
Unfortunately, Marco Dalla is a turtle that doesn’t like to stay at the surface for long (nor near the coast) and so most of the time the prototype didn’t have long enough to determine the GPS or send an SMS. In the end, we received 11 SMSs from the logger during the whole period of deployment, from 4 June until 23 July, and each one contained four GPS positions. This result is still very important because it has enabled us to demonstrate that the GSM channel is working well in sending information. Marco Dalla’s PTT stopped working on 18 August and, for now, the prototype is silent too. 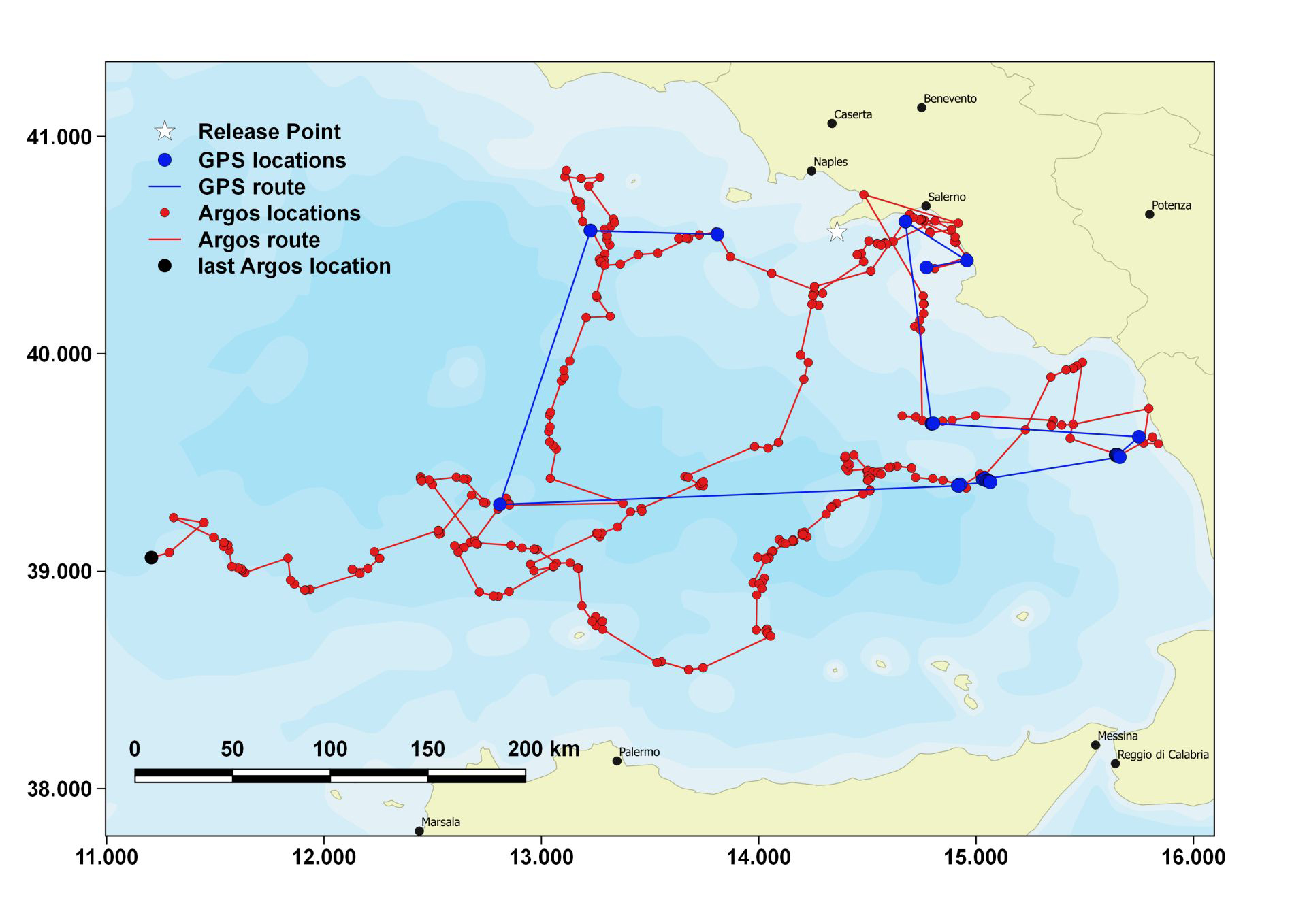 The routes reconstructed from GPS (blue dots) and Argos (red dots) locations. Since the last Argos location (black dot) was obtained on 18 August, we have had no further information on the location of Marco Dalla. There are far more Argos locations than GPS locations, we believe primarily because GPS cannot quickly find the turtle’s location during the short time it is at the surface. Image © Guilia Cerritelli

Where do we go from here? Well, the next step is to deploy the second Ecotone logger, which has been modified to send an SMS even when it has no GPS position in its memory. In this way we can find out whether it is the GPS positioning that is not working well. This time we attached the logger to a juvenile turtle in the Adriatic Sea, having chosen this particular individual because we know – from previous deployments and the literature – that juveniles seem to stay more on the surface than adults do. Moreover, turtles in the Adriatic tend to remain closer to the coast than turtles elsewhere. Taking these factors into account, we hope to collect more GPS data and receive more SMSs.

Equipped with the prototype and an Argos PTT, the juvenile turtle was released on 3 September in Ancona, central Italy.