Through the Years, The Maldives First Manta Additions

In the wild, many species appear identical: same colour, same size, same patterns, especially in the case of fish. However, by getting to know more about a particular species, it is much easier to find ways to differentiate one individual from another. Through extensive research about manta rays, it has been discovered that the spot pattern they display on their bellies is unique, and can be used to differentiate one individual from another.

Using this method, the Manta Trust has managed to identify over 5000 individuals in the Maldives since the establishment of the Maldivian Manta Ray Project (MMRP) in 2005.

This method has allowed the organization to know more about the residency patterns, movements and life history of these gentle giants. For example, we found out that the majority of manta rays don’t travel that far and tend to remain in or around the atoll they were first seen in. We have also been able to get closer to them and get to know their life’s ups -like pregnancies- and downs – like injuries. There is still so much to discover about these magnificent creatures. Every year we are the spectators of incredible moments such as mass feeding events, the unbelievable recovery of near-fatal wounds that Babaganoush the manta ray sustained and recovered from the sightings of many new juveniles. All of the exciting data that are collected helps to draw a personality of each manta that we would like to share here. Introducing some of our “old” Maldivian residents; 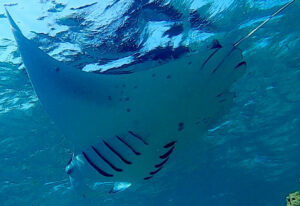 Feng Shui (MV-MA-0041) is the 41st manta recorded in the Maldives back in 2005. Three years later, she was seen pregnant, determining her status as a mature adult. She is not a big traveller as she has been spotted in one atoll only (Lhaviyani Atoll). She has been sighted over 50 times since, including in 2021. Has she tried to move to other places? We do not know, but when she was resighted in 2017, she had a large shark bite scar on her pectoral fin. Luckily, she is recovering very well and has even been seen pregnant for the second time in 2018. 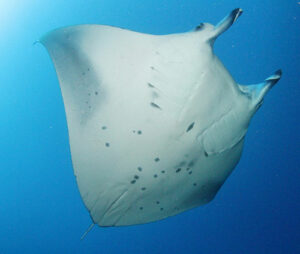 Pelican, also known as MV-MA-0127, is the most sighted reef manta ray within North Malé Atoll. With 242 recorded sightings to date, Pelican has been gracing us with her presence every year since 2006. From what we know of Pelican, she stays resident within North Malé, with a simple and relatively short migration from the East to West sides of the atoll as the monsoon seasons change. Pelican has had two pregnancies, in the time we have been observing her, first in 2007 and then again in 2018. Many dive guides working in North Malé all know and recognize Pelican as the super friendly, bubble bathing manta. We were all saddened to see her with a large shark bite in 2019; it doesn’t seem to be phasing her though.

Bananarama (MV-MA-0035), an adult female, was the 35th manta ray to be recorded in the MMRP’s database in 2005 in Baa atoll. The team was marvelled by her impressive 350km migration down to Laamu atoll in 2013, but then even more amazed by her journey back up to Baa atoll in 2014. She lives up to her reputation of being one of the most active manta rays in the Maldives, having then travelled back down to Laamu atoll the same year. Despite being one of the more enigmatic mantas in the database, with only 25 recorded encounters, she has been seen in Laamu atoll nearly every year since. It is always a delight to be graced with the presence of such an adventurous manta like Bananarama! 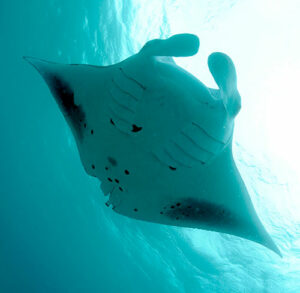 Babaganoush (MV-MA-0033), is an adult male who is well known by many in the Maldives if not worldwide! In 2018 Baba was seen with deep propeller wounds that many thought he wouldn’t survive. This strong manta proved the doubters wrong and showed the extent of manta rays extraordinary healing abilities. He is a regular visitor to the world-famous Hanifaru Bay where he visits annually to feed with the masses during the southwest monsoon! Baba is always leading the way in feeding chains and likes to flash his belly to onlookers whilst somersault feeding. His injuries definitely haven’t affected his appetite, and we hope he continues to join the Baa Atoll feeding aggregations for years to come!

We look forward to continuing to observe and record some of these oldest manta rays in our database in the years to come. Interestingly, manta ray research is a relatively new field and scientists still aren’t sure exactly how long manta rays can live. Perhaps some of these individuals will help answer that. You can support our work by adopting a manta.