The COVID 19 situation & what we can learn

Like so many others I am housebound and therefore have had to work from home for the past two months. Carrying out fieldwork on our gentle giants has become a much-treasured memory. With the travel, and various other restrictions due to COVID 19, we had to postpone much of our fieldwork until the next season, and the lab analysis of our samples is currently not possible either.

Carrying on with our outreach programme on plastic pollution also seems like it is not a viable option as it would appear rather ridiculous approaching decision-makers about potential actions to combat plastic pollution while they have their hands full trying to keep the virus situation under control and prevent their health care system from collapsing. 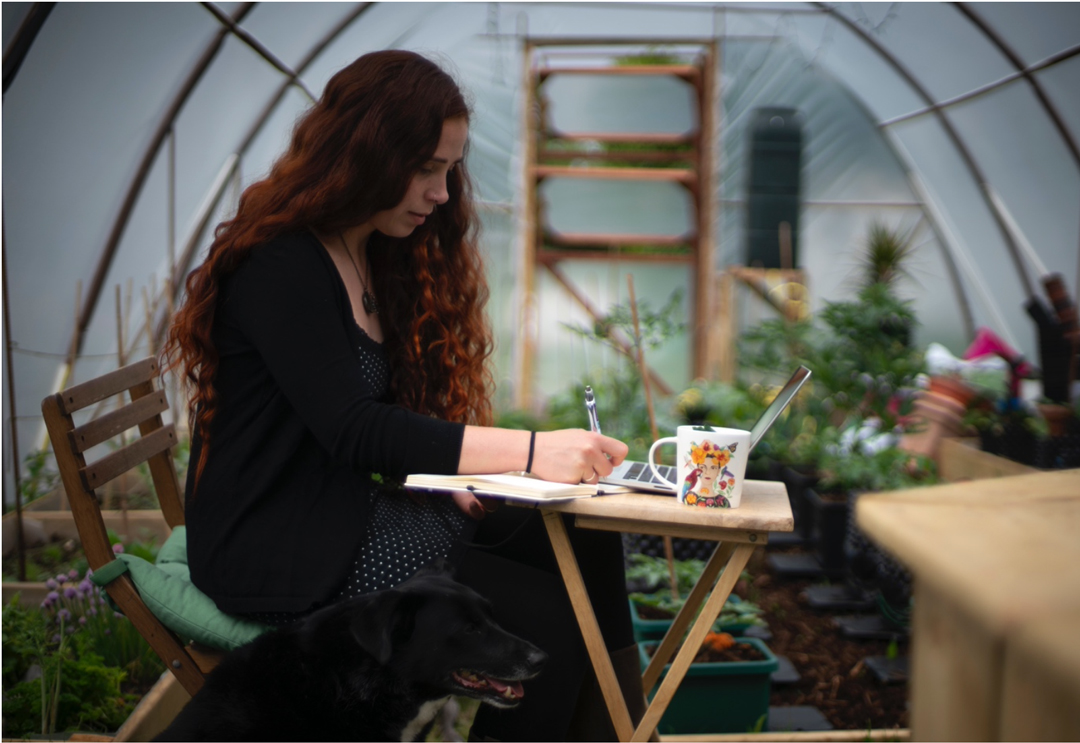 The virus hit us all with a shock. But why is that? A quick search of scientific literature tells me that scientists raised the alarm as early as 2000 about exactly this type of virus. There have been books written warning us about a global pandemic and I recently learned that many documentaries have been made about the topic, like Artes documentary “Epidemics: The Invisible Threat” from 2014.

Why didn’t we listen? Weren’t Ebola, the Bird Flu and SARS combined with warnings of scientists from all over the world enough to put us into action? Apparently not. The research was done and we knew about the danger. But the question is who knew? Scientific articles are often hidden away behind paywalls and are largely inaccessible to the general public and even despite the efforts of documentary producers and science journals to make us understand the seriousness of the situation, we didn’t seem to comprehend it.

Maybe the lesson we should learn from all this is that if we don’t want more catastrophes to hit our beautiful planet, we need to learn how to effectively communicate our findings to decision-makers. I am not only talking about politicians and high-impact industry here. I am also talking about society in general – from toddler to pensioner. We make decisions not only at the ballot box but every day such as “bus or car?”, “second-hand or new?” and “plastic or glass?”. Those small decisions in turn largely govern actions of industry and policymakers.

In order for anyone to make decisions, we need to have reliable information easily available to us. For this to happen us scientists need to learn how to effectively communicate the essence of our findings. There has been much recent development in the field of science communication and within our project, we aimed to incorporate this as much as possible. In fact, Giulia and I met during a workshop on communicating effectively at the science-policy-society interface in 2018. From day one of the project, we aimed to interact with various stakeholders in the Maldives as much as possible. These included the general public, local scientists, the tourism industry and policymakers. We didn’t just want to do the research, it was equally important that we also share our findings and provide facts to these decision-makers. 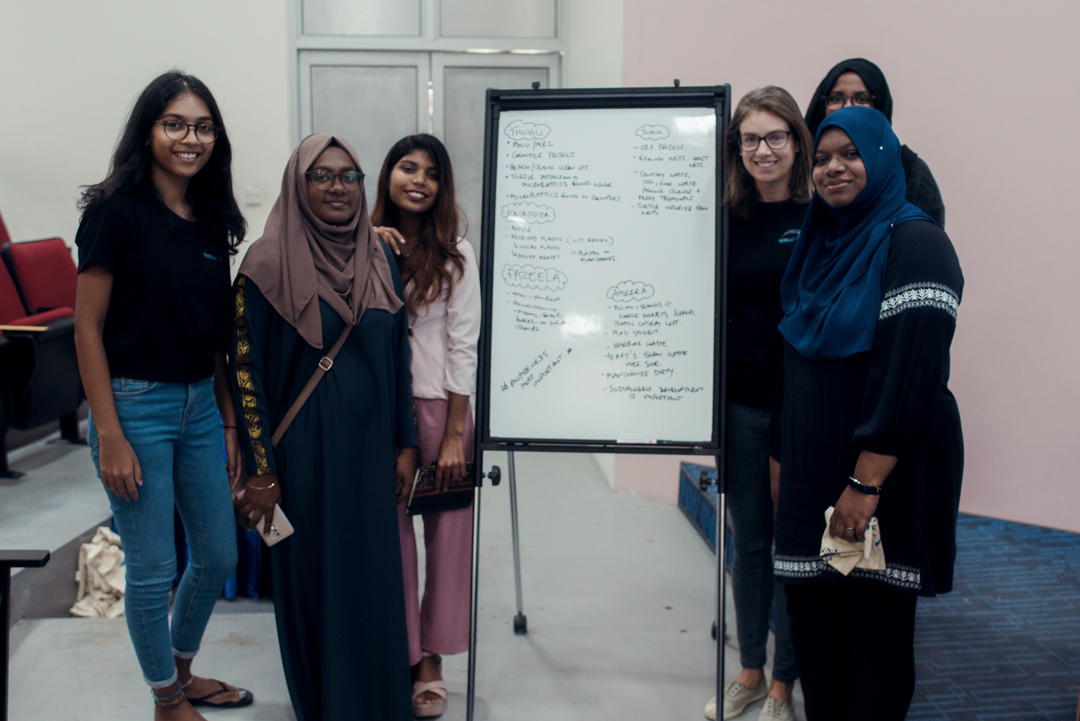 We started off by collecting their views and concerns on marine litter and whale sharks in a survey and then ran specifically tailored solution-finding workshops with each of the stakeholder groups. During the workshops, we presented each group with the preliminary findings of our study on the whale sharks which showed that they appear to ingest numerous microplastics. 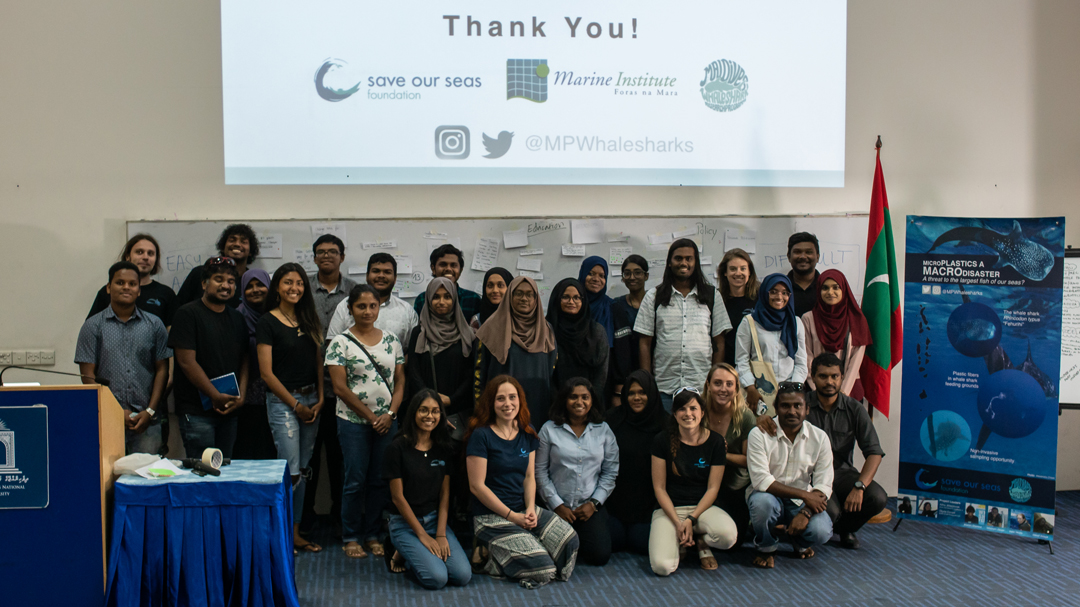 During the workshops, there was much to be learned from the local scientists as to what they believe could be viable actions for the Maldives, and also what other species may be impacted. It was very encouraging to see that many projects already put a huge amount of effort into combating plastic pollution. For example, the Olive Ridley Project which amongst rescuing and monitoring sea turtles, also records and recover ghost nets which are a hazard to marine wildlife. We were also joined by a group of Bachelors students- this was important for us, as they are an emerging generation of environmental scientists. 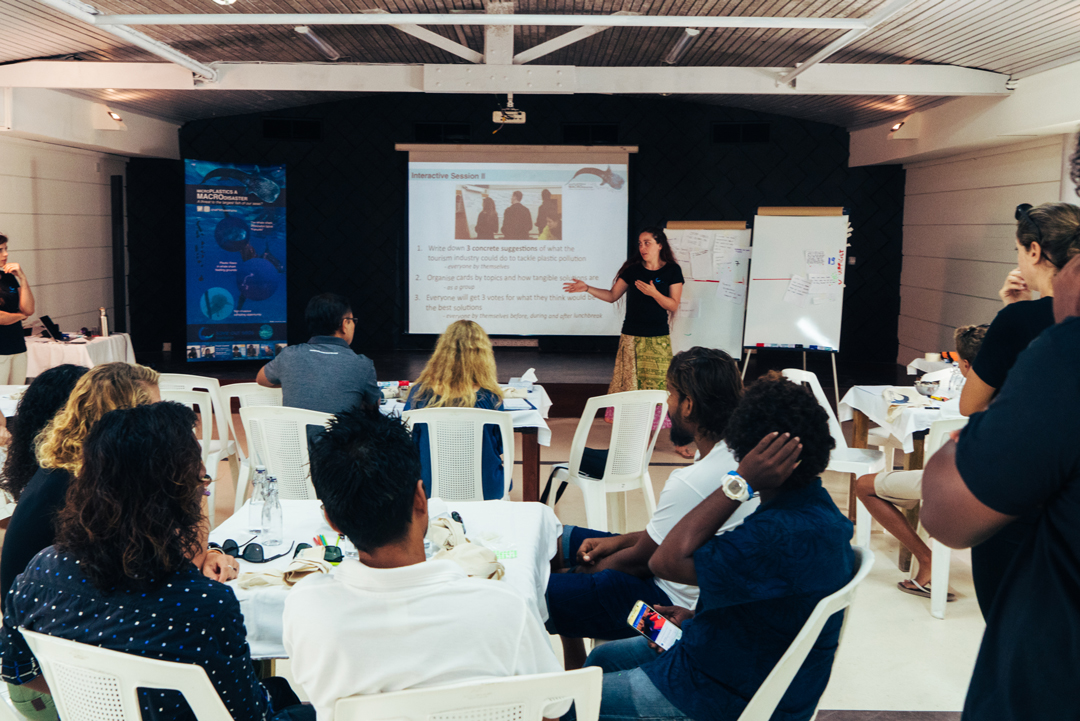 Alina and Giulia gathering ideas from tourism operators on how plastic pollution could be tackled in the Maldives during solution finding workshop with the tourism industry. Photo © Alina Wieczorek

When meeting with the tourism industry we were glad to see that both large-scale resorts and local tourism operators try to take many steps to reduce their plastic consumption. We learned, however, that the transport of plastic waste from remote islands and resorts to Thilafushi, the waste processing island, seemed to be a big concern.

When meeting with policymakers we were positively surprised with how interested they were in our scientific findings and also how keen they were to identify potential solutions with us. We are currently working on compiling a policy brief of our findings and the strategies we developed with the different stakeholders which we will distribute to each of them. 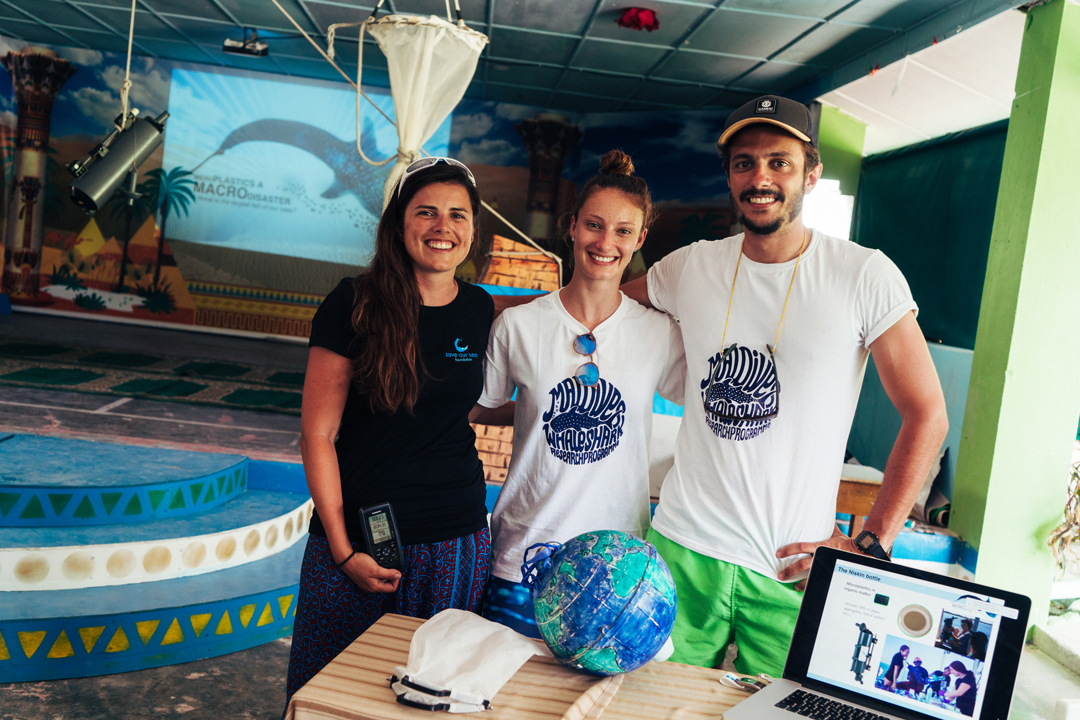 Giulia together with Volunteers of the Maldives Whaleshark Research Programme presenting sampling equipment to school children and their teachers during a workshop with the island community. Photo © Alina Wieczorek

We also designed one specific workshop for the general public to which we invited teenage school children and their teachers from Maamigili and Fenfushi island as they represent the emerging generation of local island inhabitants. The workshop was held together with the Maldives Whale Shark Research Programme who frequently carry out events with local school children. I still remember their fascination when looking down the microscope for the first time and seeing the tiny plankton twitch in the drop of water on the microscope slide and I hope for them it was as an unforgettable day as it was for us. Communicating science and putting our findings into action is by all means no easy task but it is worth making the effort to achieve some real-world changes. 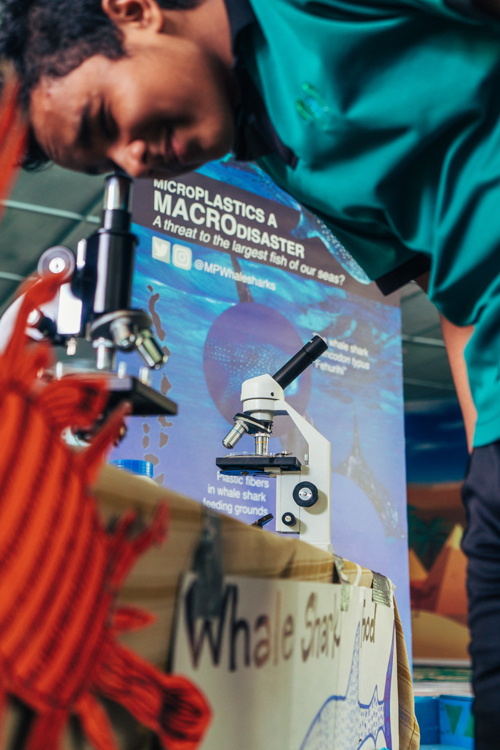 One of the local school children peering through a microscope for the first time, discovering that a drop of water contains thousands of little zooplankton which is what whale sharks feed on. Photo © Alina Wieczorek 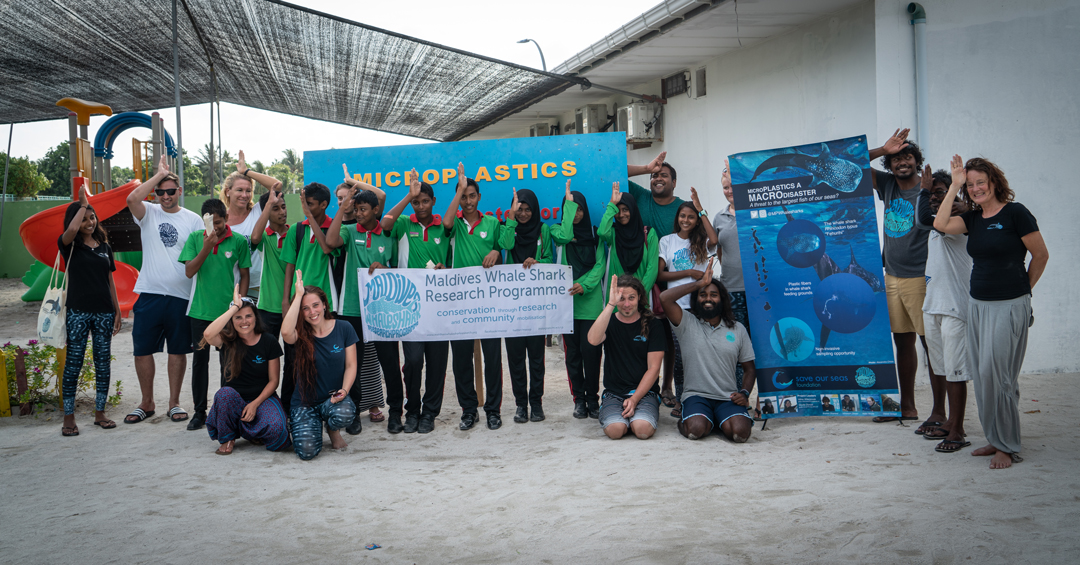 Group photo with Maamigili school class who took part in the local community workshop which was held with the support of the Maldives Whale Shark Research Programme. Photo © Alina Wieczorek

While I am browsing the news from the safety of my desk at home I am seeing a glimmer of hope among the many scary messages. An appeal made independently, by many people all over the world:

When this disaster will pass, let’s not go back to normal, let’s make things better!

The last year has been one of health and environmental catastrophes with the impacts of global warming and environmental pollution becoming ever more prominent and now we are dealing with a global pandemic. These are scary times and living in isolation so much disagrees with our social nature, maybe it’s a good time though to take the foot off of the gas and contemplate about what has been happening and what the world we want to live in looks like. We seem to have reached a real tipping point in the history of our planet and it’s time to realise that we are able to actively shape our future. It is on each of us now to take action. So let’s talk to each other and make sure to listen.

In the latest video, you will see how hands-on the team is in their approach to outreach and education with the local communities, as well as working with decision-makers in the Maldives.