The Case of the Missing Sea Monster

A painted sawfish rostrum, found in a village along the Betsiboka River, northwestern Madagascar Sawfish used to be common in the Betsiboka and in 2001, fishermen caught two sawfish there and provided them to Japanese researchers who were conducting a study of freshwater sharks and rays. © Photo by Ruth Leeney
By Ruth Leeney, 15th October 2015

‘Do you feel an uncomfortable heat at the pit of your stomach, sir? And a nasty thumping at the top of your head?
It will lay hold of you… I call it the detective-fever.’ (From The Moonstone by Wilkie Collins, 1868).

Only in my case, it turned out to be dysentery. Twice. 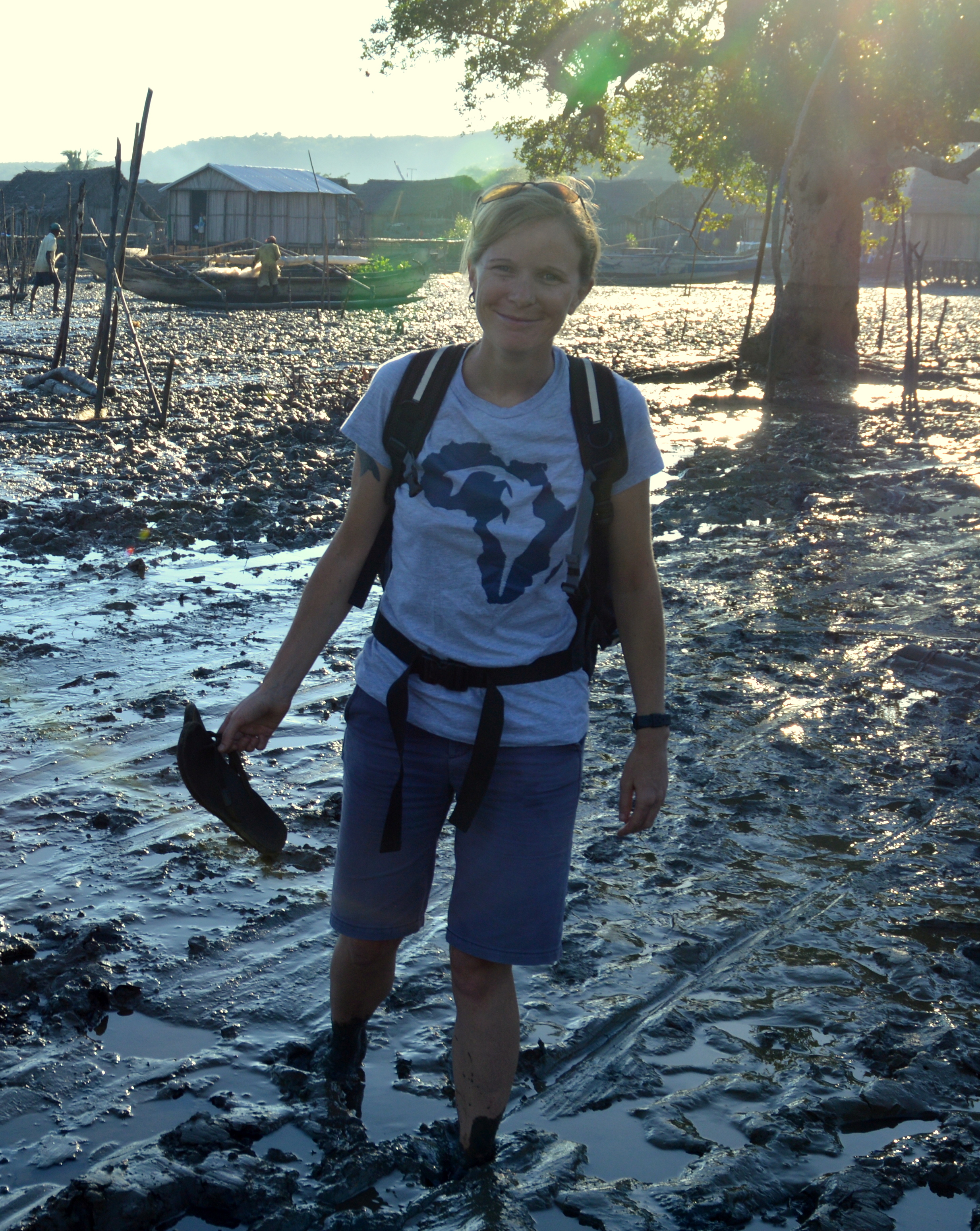 In case you think this work is glamorous I'm just back from 3 days of camping in the village of Ankazomborona, amongst the mangroves and home to millions of mosquitos Getting on and off pirogues (the wooden canoes used by local fishers) involved wading through the mudflats, sometimes up to our knees!. © Photo Ruth Leeney

As a biologist and avid scuba diver, I dreamed for years of a job that would allow me to spend my days underwater on warm tropical reefs, counting colourful fishes, or otherwise living life as a beach-bum-with-purpose. Instead, I have ended up wandering through Africa’s mangroves and rivers in search of bizarre and highly endangered creatures: sawfishes. I may go for weeks without even glimpsing a beach and spend far too much time cleaning mud out of my ears (first rule of working in mangroves: mud will get everywhere). Some days, the only fish I see lie in still, silvery heaps amid the chaos of local markets or floating in palm oil next to a mountain of rice on my dinner plate.

Meanwhile, colleagues post Instagram photos of themselves in azure waters next to a majestic whale shark/ manta ray/*insert glamorous marine megafauna species name here*. As if my envy weren’t enough, funding organisations also love such dramatic images: the dance between graceful manta ray and human diver, the moment of connection. Somehow I know there will be no ‘moment’ between me and a sawfish in the crocodile-infested, chocolate-coloured waters of a Mozambican mangrove channel.

But the world needs sawfish research. How then, I wonder, might I convey the magic in the mud and the sense of discovery that my work gives me, to spark in others an interest in sawfish conservation? 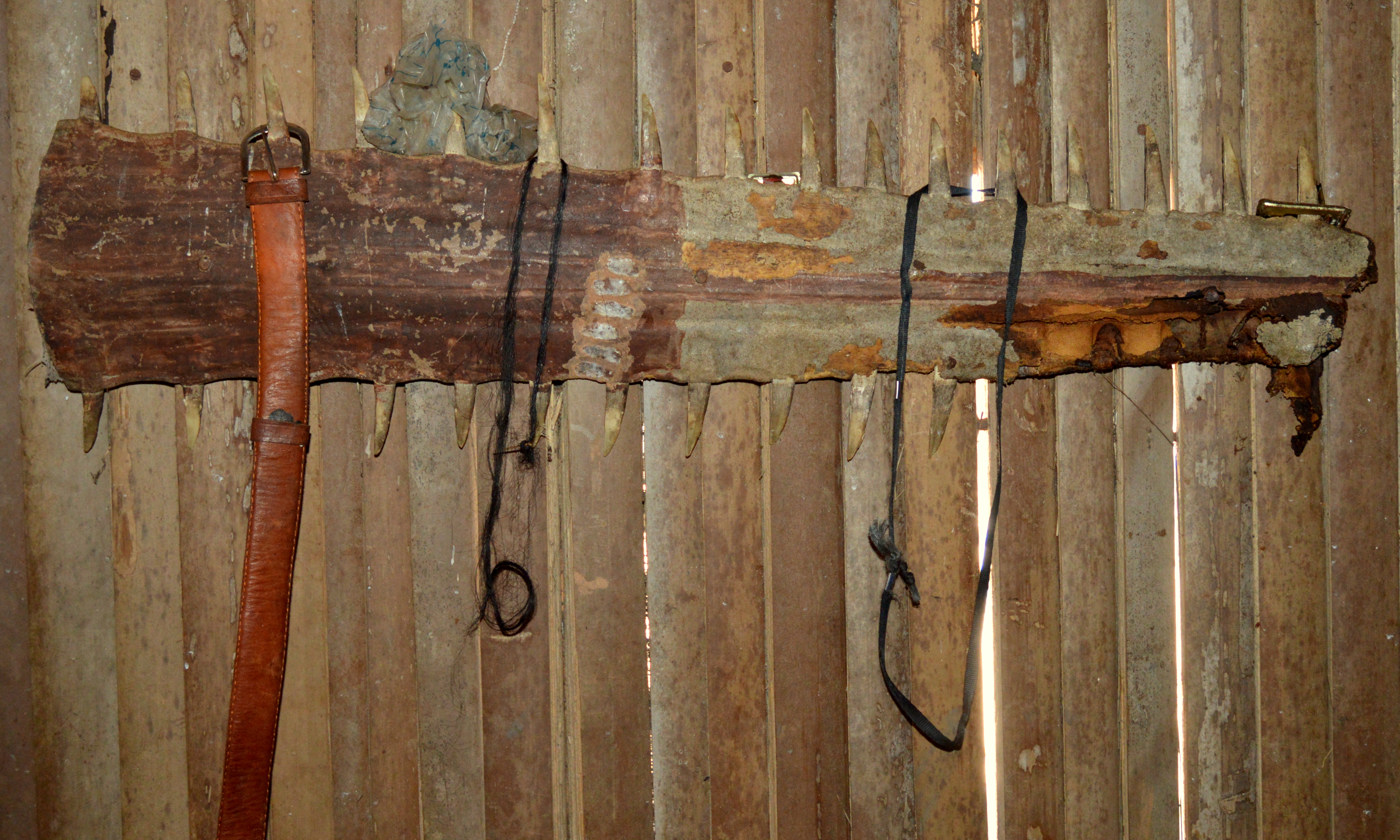 A sawfish rostrum being used as a 'porte-manteau' (clothes hooks) Unfortunately, it was a bit worse for wear after the rainy season, but that meant it was very easy to remove a tooth and take a cartilage sample!. © Photo by Ruth Leeney

I grew up watching Agatha Christie’s Poirot on television with my grandmother. Later, I devoured all the Sherlock Holmes stories I could lay my hands on, captivated by his skills of observation and interpretation. Recently, while travelling the north and west coasts of Madagascar to conduct research on sawfish, I spent my evenings reading The Suspicions of Mr Whicher by Kate Summerscale (2008). Based on a real murder investigation in the 1800s, the story inspired a generation of writers, including Arthur Conan Doyle (author of the Sherlock Holmes stories). It charts the development of a new entity in Victorian society: the detective who is tasked solely with solving mysteries too complex for the police. He collected evidence, mainly through interviews and his own observations, and made deductions. Author Kate Summerscale notes that ‘the progress of a detective was backwards… The solution to a crime was the beginning as well as the end of the story.’ 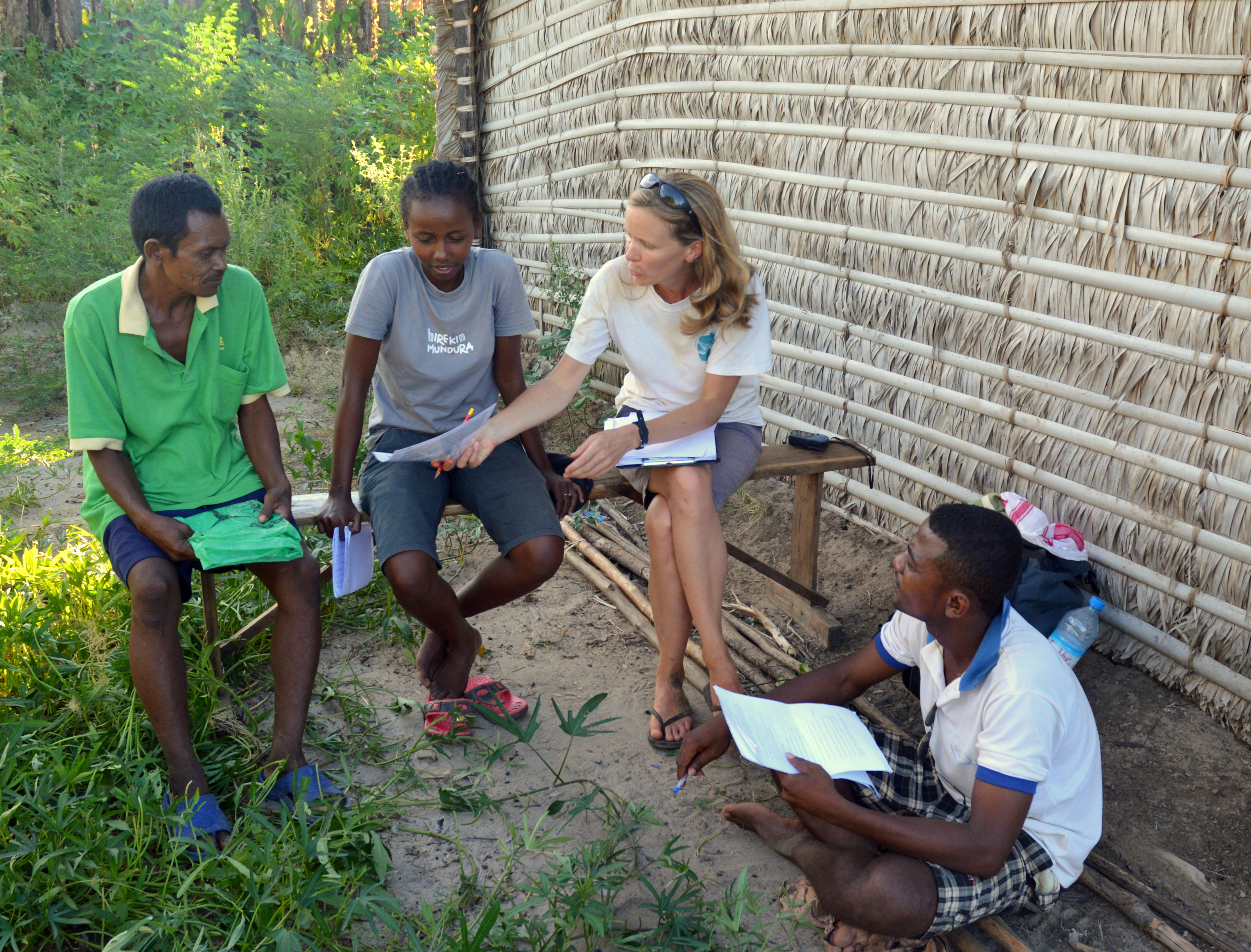 Interviewing a fisherman in the village of Ankelimitomitra, on Lac Kinkony, with help from conservation agents Sandra and Jaques of Asity Madagascar. © Photo Ruth Leeney

Reading about the development of this process, it dawned on me that searching for sawfishes is a lot like being a detective. To discover where sawfishes still exist, I first need to go back to the past, to document the places they used to inhabit, track their decline in each place and uncover the causes, known or suspected, for those declines. Perhaps I’m not so far from my hero, Sherlock Holmes, after all.

The author of The Suspicions of Mr Whicher also describes how interviews conducted with suspects in a case often revealed ‘gaps, contradictions, indications of further secrets’. Nonetheless, a good detective was able to find the truth amid the confusion, leading to the discovery of the perpetrator of the crime. Over almost five years of conducting interviews I have learnt that, just like detective work, interviewing is a fine art. Sometimes conflicting information comes from two different interviewees in the same village; sometimes a fisher changes his or her story as the interview progresses. My job is to sift through these responses and find useful clues. 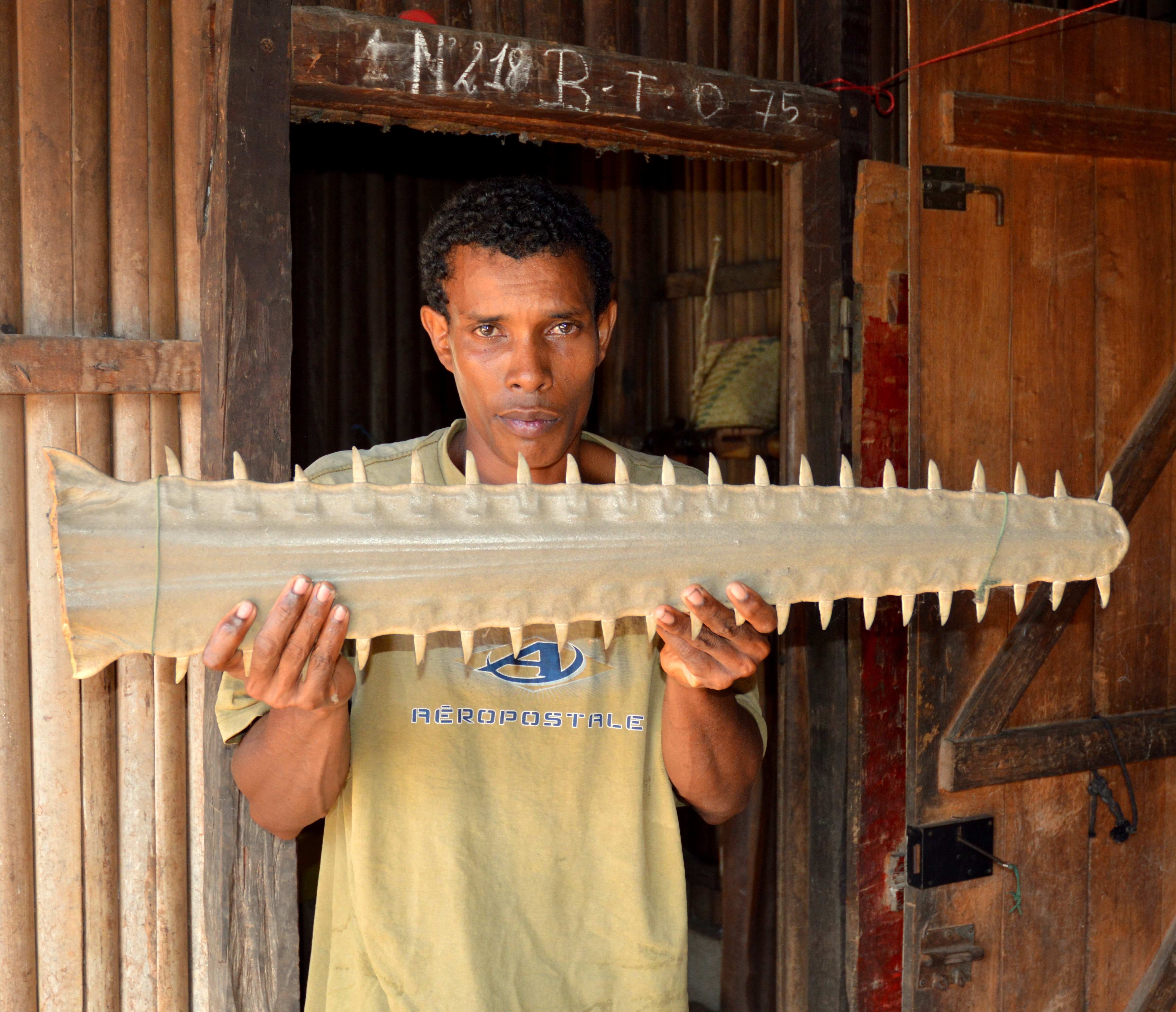 I visited Analalava (which means 'long forest'), at the mouth of Narinda Bay, this week Several fishermen around Ambanja had told me that they used to catch many sawfish in Narinda Bay There are many shark fishers there, but they told me that sawfishes are rarely caught any more This rostrum, in a fisherman's house, came from a largetooth sawfish caught around 10 years ago, in Ramanetaka Bay. © Photo by Ruth Leeney

I have learnt to recognise the sources of valuable information: fishers who have caught or observed many sawfishes over the years and can describe in detail how sawfishes use their rostrum or ‘saw’ to find and kill the small fish they eat, or who know precisely the times of year when sawfishes used to visit their waters, for example. Their knowledge can lead me closer to the truth about sawfishes in African waters – the habitats they used regularly, the causes for their decline (or even local extinction) and, most importantly, those secret corners where sawfishes still exist. Stumbling across four or five sawfish rostra over the course of a morning in a tiny fishing village is also an exciting sign that sawfishes used to be caught regularly by local fishers, and maybe still are.

In The Hound of the Baskervilles (Arthur Conan Doyle, 1901), Sherlock Holmes spent some weeks in an ‘old stone hut’ on Dartmoor in south-western England observing the comings and goings of the local people and their habits and work, all the while living on scarce rations and braving the elements of the moor. On a recent trip in search of sawfishes to Lac Kinkony, Madagascar’s second biggest lake, I took some comfort in remembering that story as I spent days clambering in and out of scorching-hot metal canoes, wading unsteadily through river channels, sloshing through mud and listening to the roar of mosquitos outside my tent as I slept on the hard ground just beyond the lake shore. Unlike Holmes, though, who despite the rough conditions ‘was thin and worn, but clear and alert, his keen face bronzed by the sun and roughened by the wind … his linen as perfect as if he were in Baker Street’, I ended my trip a rumpled, muddy, sunburned and dangerously dehydrated heap. Certainly, I am not the most stylish of detectives. 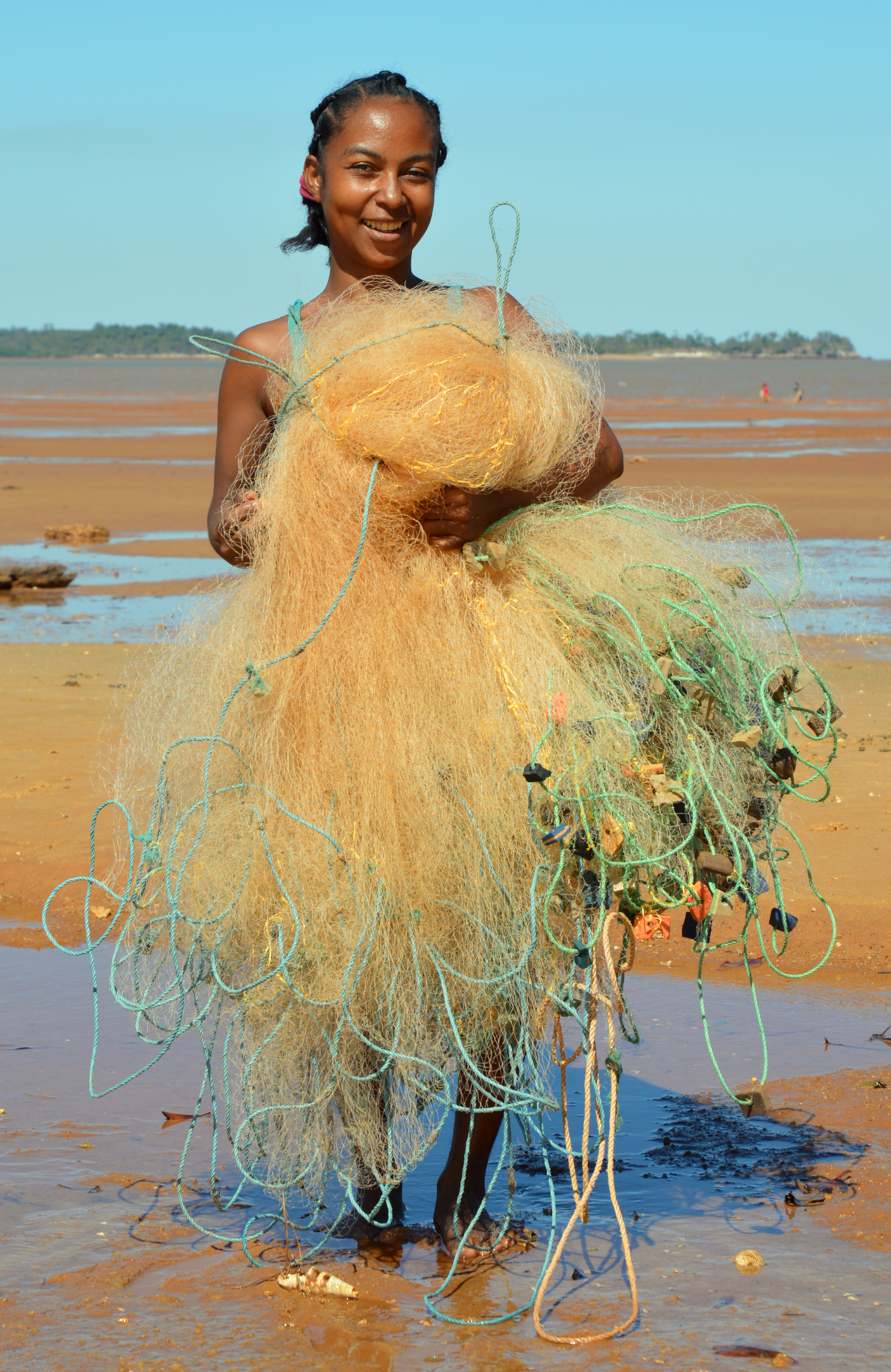 A woman on her way to fish from the beach, using a cast net, in northern Madagascar. © Photo by Ruth Leeney

The search for sawfishes is at times intriguing and exciting: visiting remote coastlines and riverbanks, taking part in the traditional ceremonies of fishing communities, meeting fishers who have recently caught a sawfish. But travelling alone for months at a time can be a lonely and frustrating task, too. As Watson observes of Sherlock Holmes’ camp on Dartmoor: ‘he must be of Spartan habits and cared little for the comforts of life. When I thought of the heavy rains and looked at the gaping roof I understood how strong and immutable must be the purpose which had kept him in that inhospitable abode.’

But then, if the protection of the most endangered family of sharks and rays on the planet does not ignite a strong sense of purpose, what would?

Of course, my work is in some ways vastly different from the investigation of crimes. No one person is to blame for the demise of sawfishes, and we may never know the reasons why some populations have disappeared. What’s more, in some places we still have a chance to prevent the crime – to halt the decline before another sawfish population disappears. But we need to work with the speed and efficiency that Sherlock Holmes did in his investigations because for these critically endangered sea monsters, we are truly racing against the clock. As Holmes said in The Adventure of the Copper Beeches: ‘Data! Data! Data! I can’t make bricks without clay!’