Last month, Daniel Fernando and Isabel Ender carried out a research trip to Western Africa to learn more about its mobulid fishery. Here Isabel explains what she discovered:

I will never forget the moment I spotted it, right there in front of me. It left me speechless, breathless. I had gone out to search for mobulas this morning, the sun was burning fiercely, and I was almost at the point of giving up, when I saw it – my first hammerhead shark. But my encounter was different than most people’s “first“. My hammerhead was covered in sand, lying at my feet. Infact, it was only the head, nothing else, with two dried out holes for the eyes on either side. 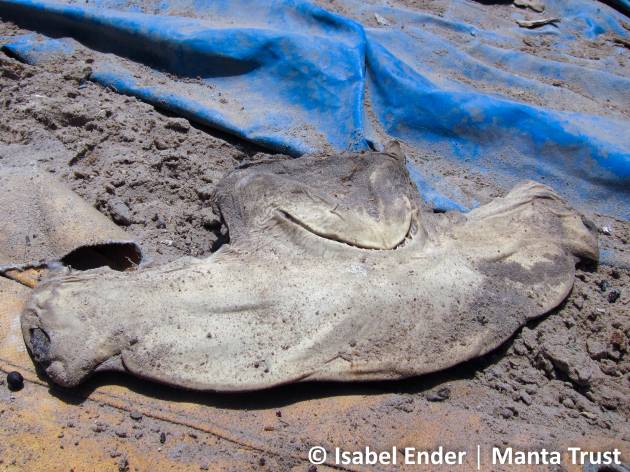 Head of a hammerhead! © Isabel Ender

I was standing at the fish market in St. Louis, on the border to Mauretania. Then, next to my hammerhead I saw half a mobula ray, drying in the sun, and further down another ten, twenty, maybe fifty or a hundred rays.

“It is the low season,“ Mamadou explained apologetically, “when it is rainy times, we catch the big ones. Many more than you see here, it covers everywhere, every day“. It takes two days to dry the sharks and rays after which they are sold to middlemen to be later transported to the capital of Senegal, Dakar, and neighbouring countries such as Ghana and Mali, among others.

“How much do you get for a mobula ray?“ I ask. “Is there a special price for the gill rakers?“ “No“ he answers looking surprised, “everything is sold by weight, for about 300 cfa/kg“.

That is 50 US$ cents per kg of ray, a shocking and scary reality. I want to tell Mamadou how wrong this is and that alive these fascinating creatures are much more valuable for many reasons! Yet i remain quiet. Who am I to judge? Who is to blame Mamadou for wanting to feed his family? Or the middleman trying to make a better living because demand and international trade permits him to do so. I take my notes, photos, ask questions and return to my hotel room with many more questions in my head. 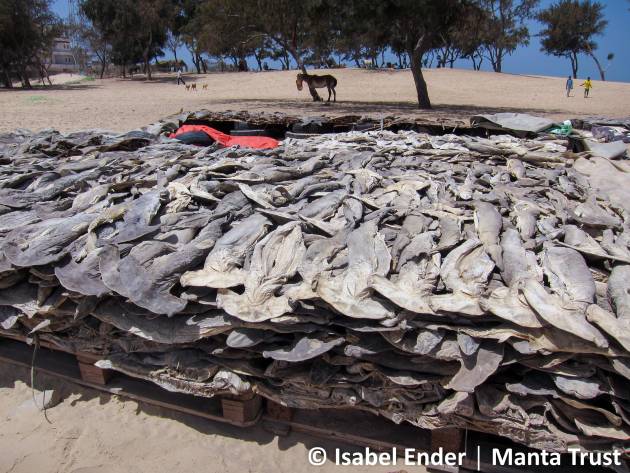 This was only day eight of our five week long research expedition in West Africa, supported by the Save Our Seas Foundation. Daniel and I had planned this trip for a long time in order to find out about the nature and extent of the Mobulidae fishery in this region. Mantas and mobulas are caught as bycatch in many fisheries but they are also increasingly targeted directly for the trade of their highly valuable gill plates which are used in the global traditional Chinese medicine trade. In West Africa we know virtually nothing about the rays being caught, neither the type of species or where the critical areas for the fishery exist. As part of developing the Save Our Seas Mobulid Identification Guide – a comprehensive global taxonomical, morphological and genetic identification guide for all mobulid ray species – we were also hoping to collect more data on a particular species of mobula known to exist here for which very little scientific information currently exists.

However, in the following days “life happened“, while we were busy making other plans. St. Louis and Dakar had given us a great start to the expedition in Senegal and we were getting ready to head south to Joal Fadiouth, another important fishing site in the region. Equipped with a 4×4, research supplies and our camera equipment, we were ready to go. But then the next morning, news of an Ebola virus spreading across southern West Africa stopped us literally in our tracks. Yes, I am talking about the Ebola virus that has no cure and kills people! It had appeared and was spreading exactly along the route we had planned to travel overland, so we had to change our plans and are now heading north along the West African coast, across Mauretania, to our new destination: Morocco! Watch this space to see what we find along the way…