Shopping for Sharks in India

I am slopping through an ankle-deep slurry of the gory remains of marine life from every trophic level in the Indian Ocean. My flip-flops are slippery and I’m finding it hard to keep up with the rest of the group. Taking photographs is just about impossible because I am part of a human conveyor belt in perpetual motion. The man in front of me has a bucket on his head and it’s filled to the brim with small fish, bits of which slop over the side every time he is jolted by a change of pace in the general throng.

I try to pause and snap a shot of an enormous stingray whose long tail has been threaded through the sphericals behind its eyes. That tail can’t protect it now. The market is full of deadly weapons – poisonous stings, sharpened fangs, lethal swords and mighty jaws – and they are all as debilitated as the unfortunate corpses they are attached to. Someone is shouting up ahead in the chaos and the heaving mass somehow manages to sway to the left, making room for a man pushing a wooden trolley laden with gargantuan conger eels. 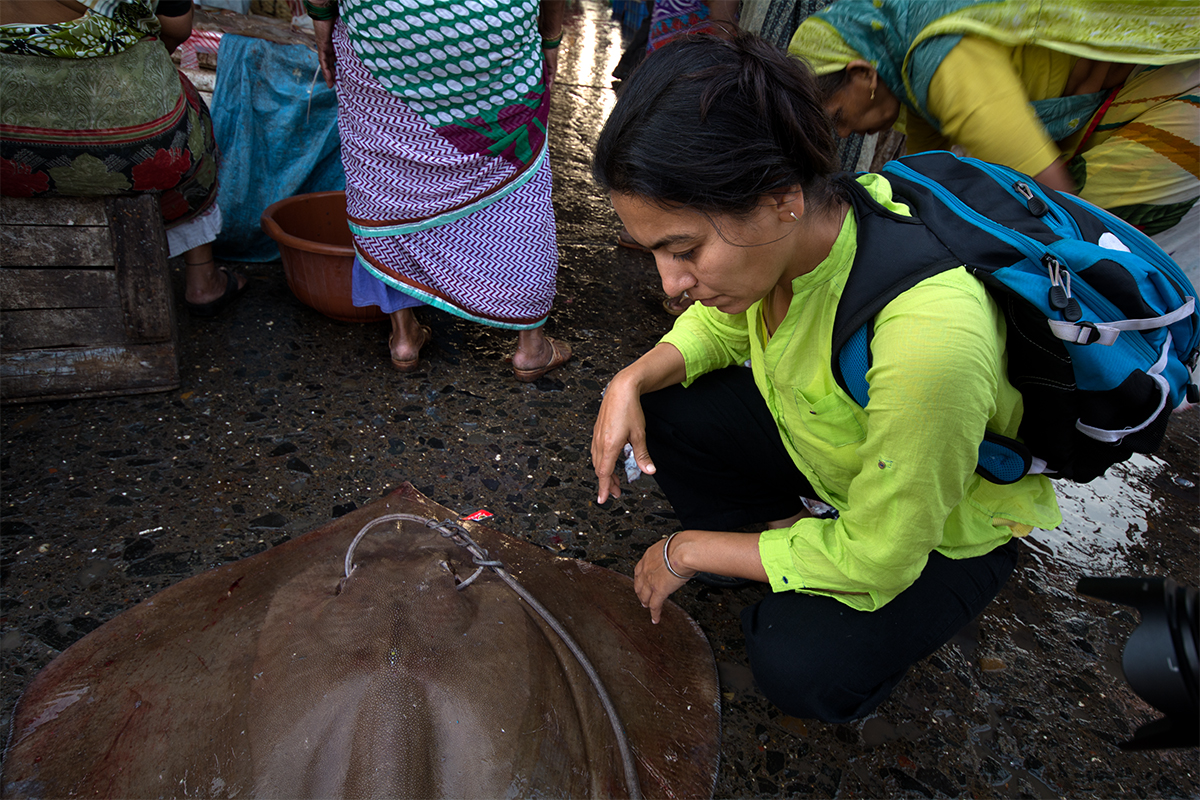 Dipani inspects a large ray. Thousands of rays of all shapes and sizes are on sale at the market. Photo © Philippa Ehrlich | Save Our Seas Foundation

Sassoon Dock in Colaba, Mumbai, is one of India’s largest fish markets. Trawlers that ply the Arabian Sea arrive here after weeks at sea and weary fishermen hand their catch over to female traders who haggle hard for the best prices. Fishy-business on the pier is fast-paced and fierce, and Sunday mornings especially are absolute pandemonium. This is a far cry from the field work I have witnessed in the past. We are not in a beautiful or remote location, there are no tags to be deployed or fins to be photographed. I have never seen so much marine diversity in one place, but everything is dead. Individual scoliodon sharks may not weigh much, but every year, tons of them are sold in markets all over India. © Philippa Ehrlich | Save Our Seas Foundation

I cringe as a piece of smelly fish splashes onto my arm. Importantly, though, it can be identified – and that is why we are here. Fisheries science is an essential part of the picture when it comes to marine conservation and I am visiting Sassoon Dock with Dr Dipani Sutaria, an SOSF-funded scientist. She is leading a team of three researchers and a group of student volunteers who are collecting data from landing sites all along India’s Maharashtra and Gujarati coastlines.

Studies suggest that India has the second biggest shark fishery in the world, but very little is known about the country’s shark species and abundance, how they are caught and how local communities perceive them. Dipani hopes that her research will help scientists paint a picture of what is happening to these animals and form the basis of a conservation plan. 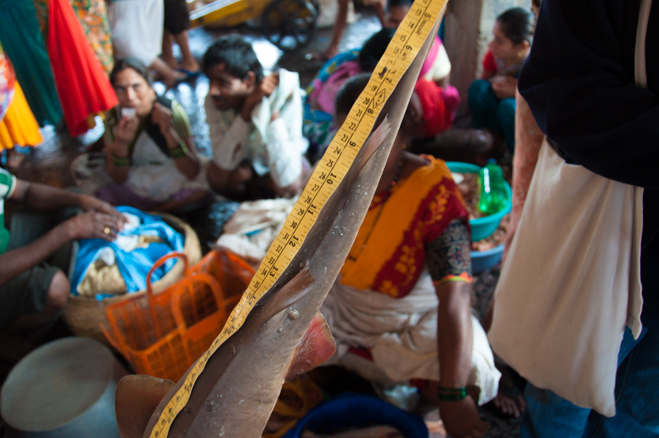 Dipani and her team of volunteers have to take various measurements to collect their data. © David Tickler

There are fewer sharks for sale today and those that we have seen are small (including some neonate scalloped hammerheads and an oceanic blacktip that still had an umbilical scar). Dipani’s volunteers Marcus Tobias and Evan Nazareth explain to me that a few months ago they were seeing a lot of big animals but they believe the catches are seasonal. We stop to take the measurements of two small bamboo sharks they have found. They are unsure of the species and decide to buy the sharks for 80 rupees (about US$1.60).

I am amazed at how these guys manage to get work done here in the midst of constant pushing and shoving. I have scarcely been able to take a single photograph for fear of being trampled by the crowd. The only other time I experienced this kind of relentless foot traffic was at Christmas in Times Square, New York. Somehow, Marcus and Evan are managing to stay in one place for long enough to measure, identify and sex the dead sharks before being swept along by the tide of determined buyers and sellers. 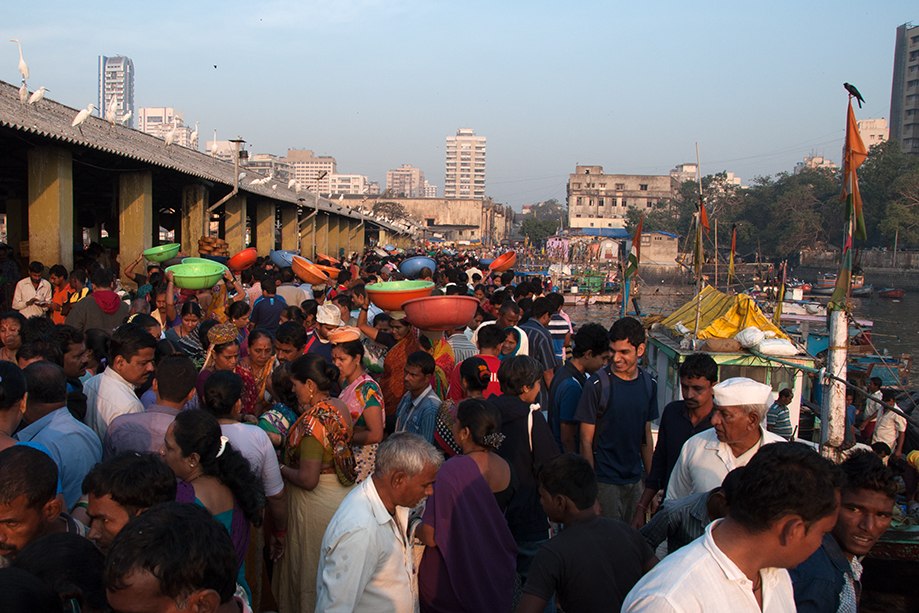 The volunteers have to work fast in the chaos of Sassoon Dock. © Philippa Ehrlich | Save Our Seas Foundation

Traditionally, sharks were only caught and consumed in the eastern state of Tamil Nadu, but the growing market has pushed the trade westwards. I watch a man buy a few kilos of carefully prepared scoliodon sharks for a special shark curry recipe that he seems very excited about. These animals only grow to about 70 centimetres and I have seen hundreds of them for sale in markets throughout south-western India. They are listed as Near Theatened by the IUCN, but like many of the smaller elasmobranch species, there is not enough data to accurately assess their status. I ask Dipani if she ever comes across finned animals. She explains that although finning might take place illegally in Indian waters on foreign vessels, it is not practised by local fisherman because culturally it would be regarded as a terrible waste of food and resources. At Sassoon Dock, women are in charge. This woman is haggling the best price for her collection of scoliodon sharks. © Philippa Ehrlich | Save Our Seas Foundation

We leave the market and, after carefully concealing the putrid bamboo sharks from the driver, we take a taxi to St Xavier’s College, the hub of shark research in Maharashtra. Dipani attended the college 20 years ago and her professor at the time, Dr Smita Krishan, is now head of the Zoology Department and is helping the shark project. Evan prepares to dissect the shark whilst Marcus and Dipani page through a copy of Sharks of the World to identify it. In India, as in many developing countries, the brightest students pursue more lucrative career paths, like engineering and medicine, and there are very few highly qualified marine biologists. Dipani knows of less than a handful who are working on sharks – and that means there is an enormous knowledge gap. Earlier this year, she was very grateful for a visit from Dr Rima Jabado, a fisheries expert from the UAE who ran vital workshops with her volunteer teams. 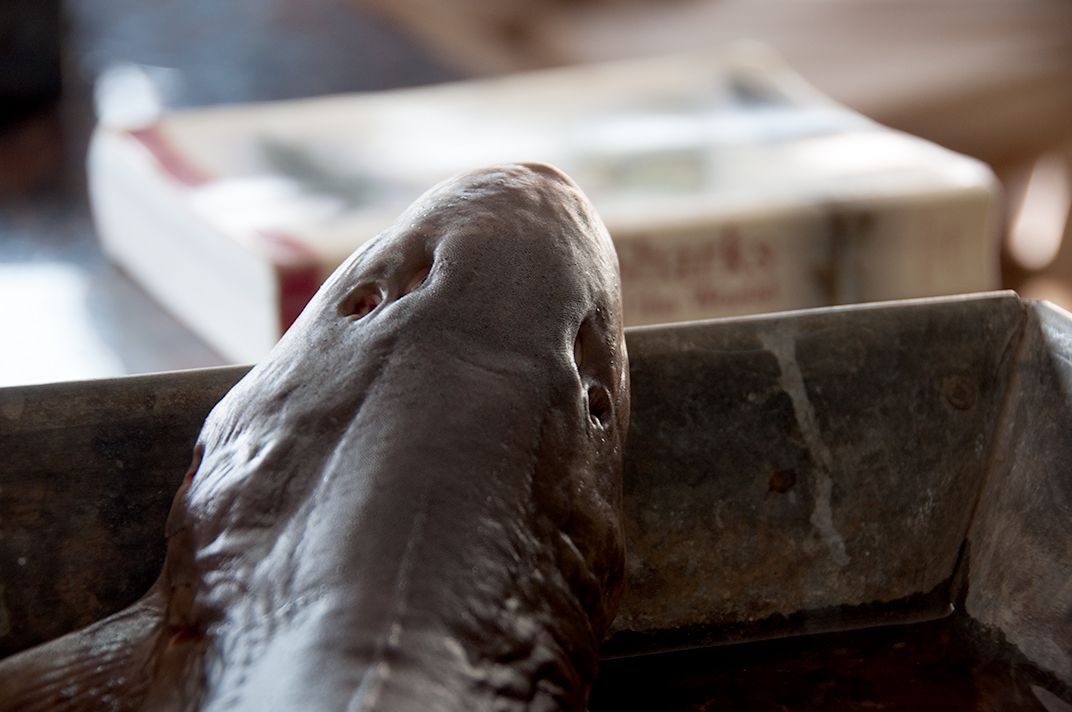 After successfully dissecting and identifying the bamboo sharks we head out to another landing site about an hour outside the centre of Mumbai. It is late afternoon and the light is perfect. Here things are less organised and pressurised. I am able to photograph Dipani and Evan measuring a small hammerhead and then wander over to watch boats being offloaded while she chats to the local women about recent shark catches. While looking for more sharks, we come across a large drum that seems to have been forgotten. Inside is a large pile of rays, including a small eagle ray. I remember how in awe I was the first time I saw one of these beautiful animals winging through the shallows in the Seychelles. Here they do not fetch many rupees and are left lying in the sun until the more valuable catch has been sold. Dipani’s project focuses on sharks, but they collect data on rays if time permits. It seems some targeted research is desperately needed into the plight of the shark’s flatter cousins as well. 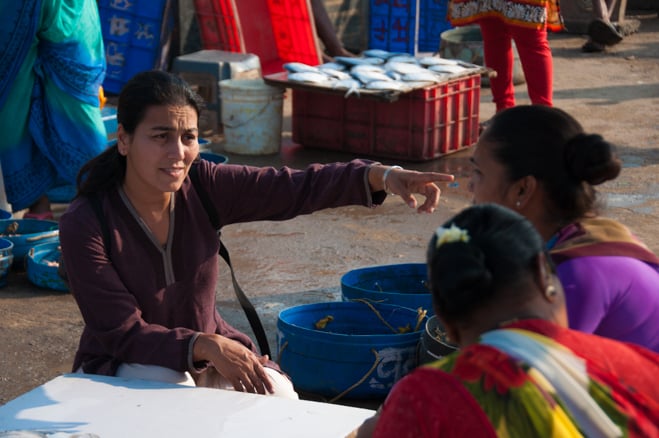 An important part of Dipani’s research is speaking with local women to better understand the socioeconomic aspects of the fishery. © Philippa Ehrlich | Save Our Seas Foundation

By the time we finish at the market it is early evening. Dipani and Evan have been up since 5 am and we are all exhausted. On the cab ride back into the city Evan has a lot of questions. It seems that he is trying to download everything we know about sharks in one evening. He asks about the behaviour of different species and populations in other parts of the Indian Ocean. He wants to know about internship programmes and the best way to obtain diving certification. Even after a very long day, I am encouraged and energised. Being a marine biologist in India is clearly not easy, but we desperately need more scientists like Dipani and Smita. If students like Evan are this interested and passionate, it is a very good sign. I am also convinced of the value of the project, because while it will hopefully teach us a lot about India’s shark fishery, it is also serving as an important and inspiring training ground for the country’s future conservationists. 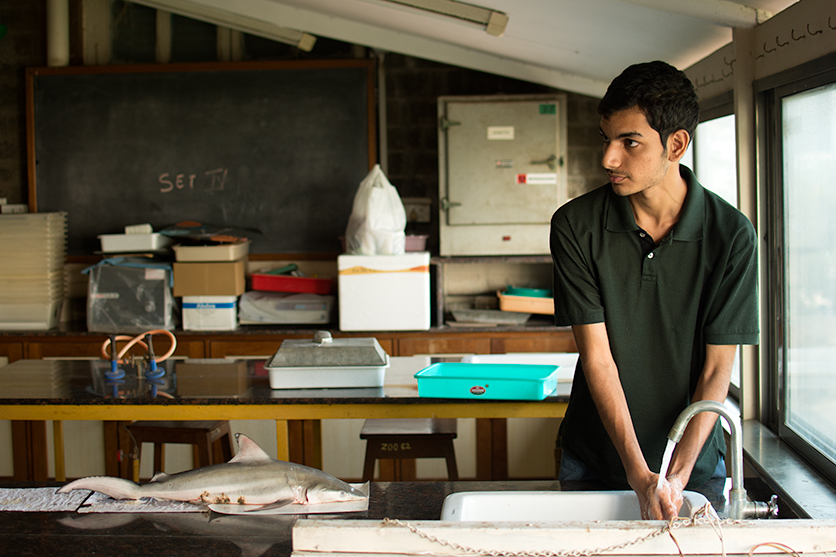 Project
Sharks for sale in India