Shark fishing in the deep

In my previous blog, I wrote about why deep-water sharks are so unique and important. These rare and intriguing creatures are poorly understood and have adapted to survive in an environment unlike any other. But how do researchers catch these sharks to study them in the first place? Before any weird and wonderful deep-water science can begin, our team had to venture far offshore to catch these elusive species. 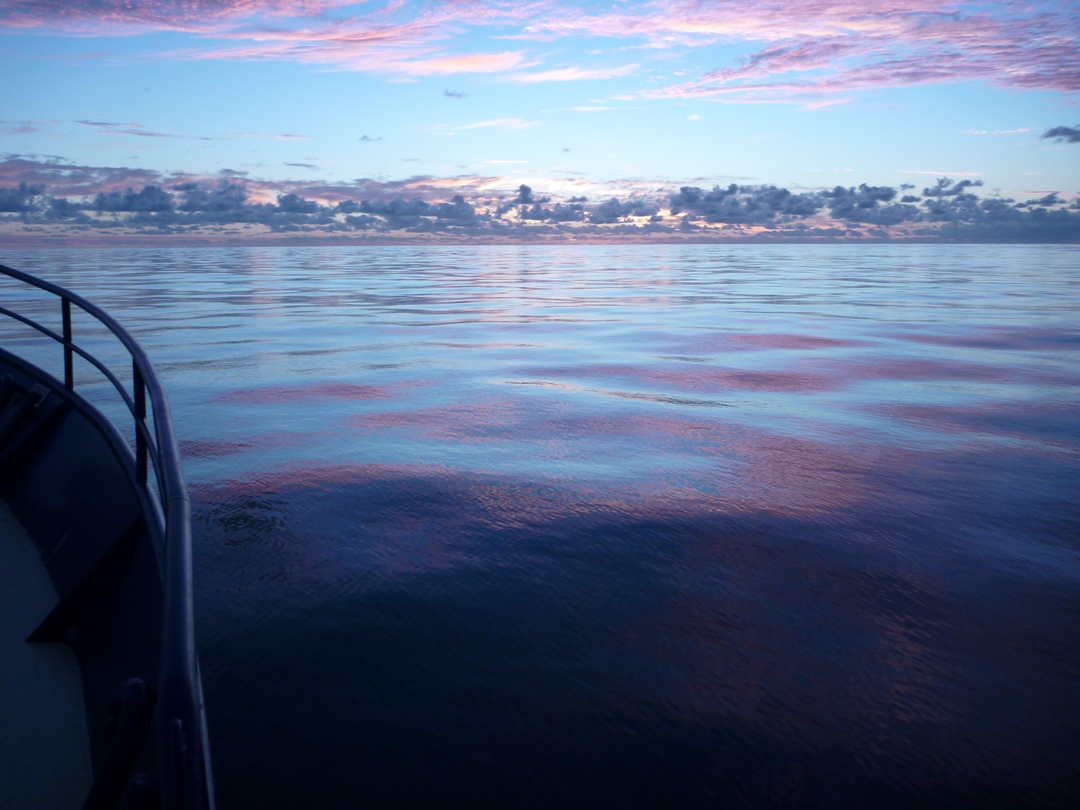 Deep-water shark fishing is no easy task and requires a dedicated team. One of our project leaders, Dr Cassandra (Cassie) Rigby, took on this challenge and travelled offshore to the Swain Reefs in the southern Great Barrier Reef Marine Park. There she worked aboard several deep-water trawlers that sometimes catch sharks and rays. Trawlers use large nets that slide along the ocean bottom to collect fish and other species. These trawlers are targeting the very yummy eastern king prawn and are equipped with turtle excluders and by-catch reduction devices that prevent large animals from being caught in the net. However, sharks and rays less than one metre in length are still occasionally caught. Scientists who hop aboard these vessels can collect sharks and bring them back to the lab for further study. 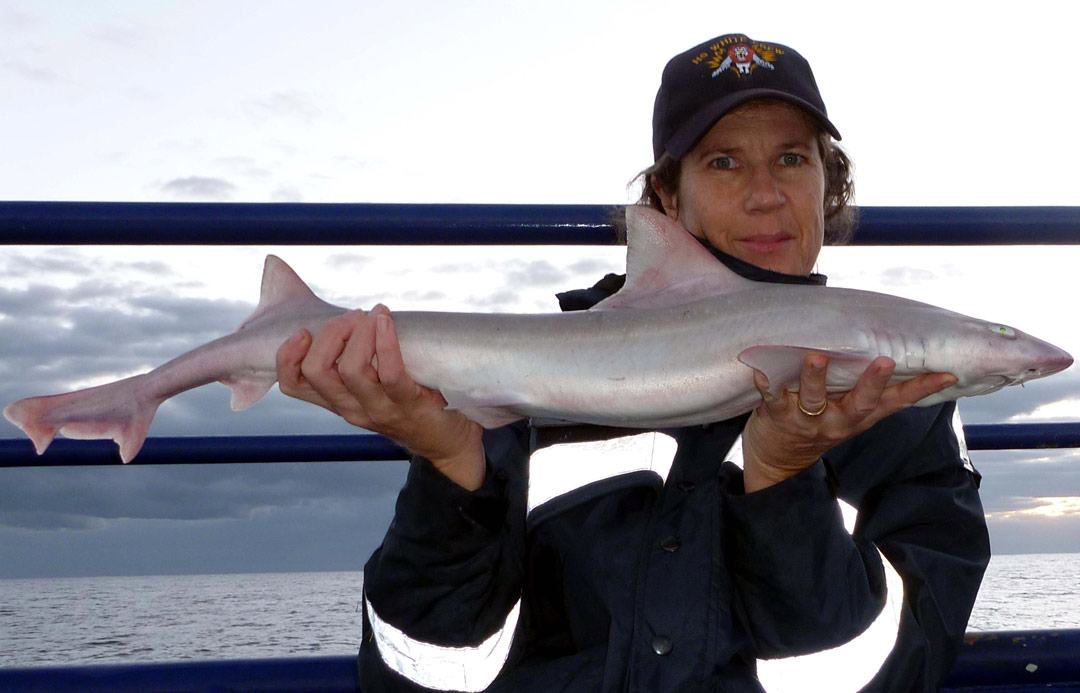 Working on these trawlers is no pleasure cruise, but requires serious commitment. The trawlers fish 200 nautical miles offshore and stay at sea for five weeks at a time. Communication with land is often difficult and you have to be prepared to be cut off from your life back home for at least a month. Luckily for us, Cassie is no stranger to long sea voyages. Before beginning work on this project, she had already spent more than 600 days at sea. Trawlers can also be dangerous environments, with large nets, ropes, wires and big winches always swinging across the deck and sometimes in very stormy seas. Some days on the water were very rough, with 40-knot winds and waves between four and seven metres high. But when you head far out to sea, turning back is rarely an option.
Working on a trawler also requires a great deal of energy. As prawns are easier to catch at night, Cassie worked through the night and slept during the day. The trawl nets are put in the water at dusk every night, pulled for a few hours and then hauled back in using an electronic rope-and-pulley system. The catch is a mixed bag of sea life: lots of crustaceans, some fishes, and, of course, the occasional shark. All these creatures are emptied onto a large tray where they are sorted. Because the sharks and rays are extracted from very deep waters, they have all died by the time they are brought on board. Each shark caught is identified, measured, photographed and snap-frozen at -43 °C. This process continues over and over again until dawn. In the end, Cassie collected 1,680 sharks and rays from 11 different species. 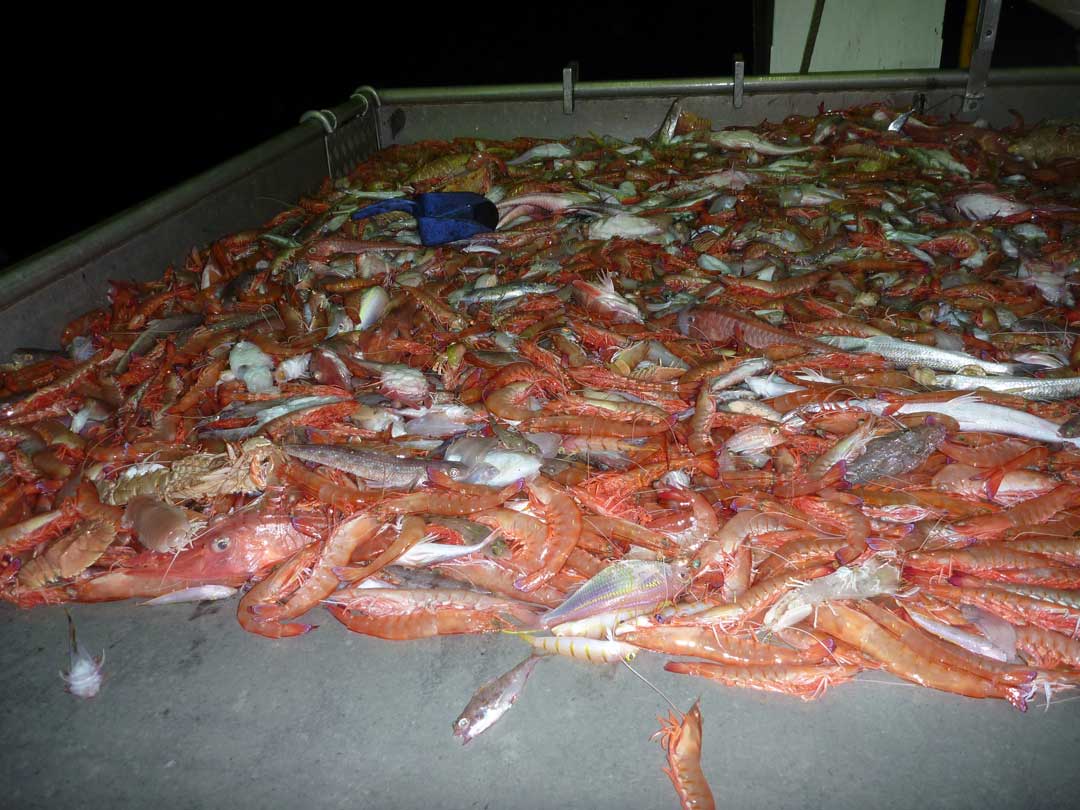 When trawl nets are brought on board, the catch is deposited onto large sorting trays. It is made up mostly of crustaceans, like the eastern king prawn, but sometimes small sharks are also captured. Photo © Cassandra Rigby

Like many kinds of environmental research, the study of deep-water sharks requires lots of energy, a positive attitude and a willingness to put yourself out there and brave the unknown. If this sounds like you, deep-ocean research could be in your future.