A ‘naughty’ blacktip reef shark that, like everything else, is plentiful in the water column. © Chantel Elston| Save Our Seas Foundation
By Emily Moxham, 27th May 2015

Bonefish are the basis of an economically important catch-and-release fishery, but in the Bahamas and Florida there are indications that the species is less abundant than it used to be. Unfortunately, many fish die after being released as a result of predation or poor handling. Even though best-practice fishing guidelines are in place, they are seldom adhered to.

During our study we have been careful when handling and releasing the bonefish to ensure the survival of as many of them as possible. If a fish we release is taken by a predator, it means that not only have we lost an expensive transmitter (which we had surgically implanted into the fish), but our sample size, and therefore the robustness of our study, is reduced. 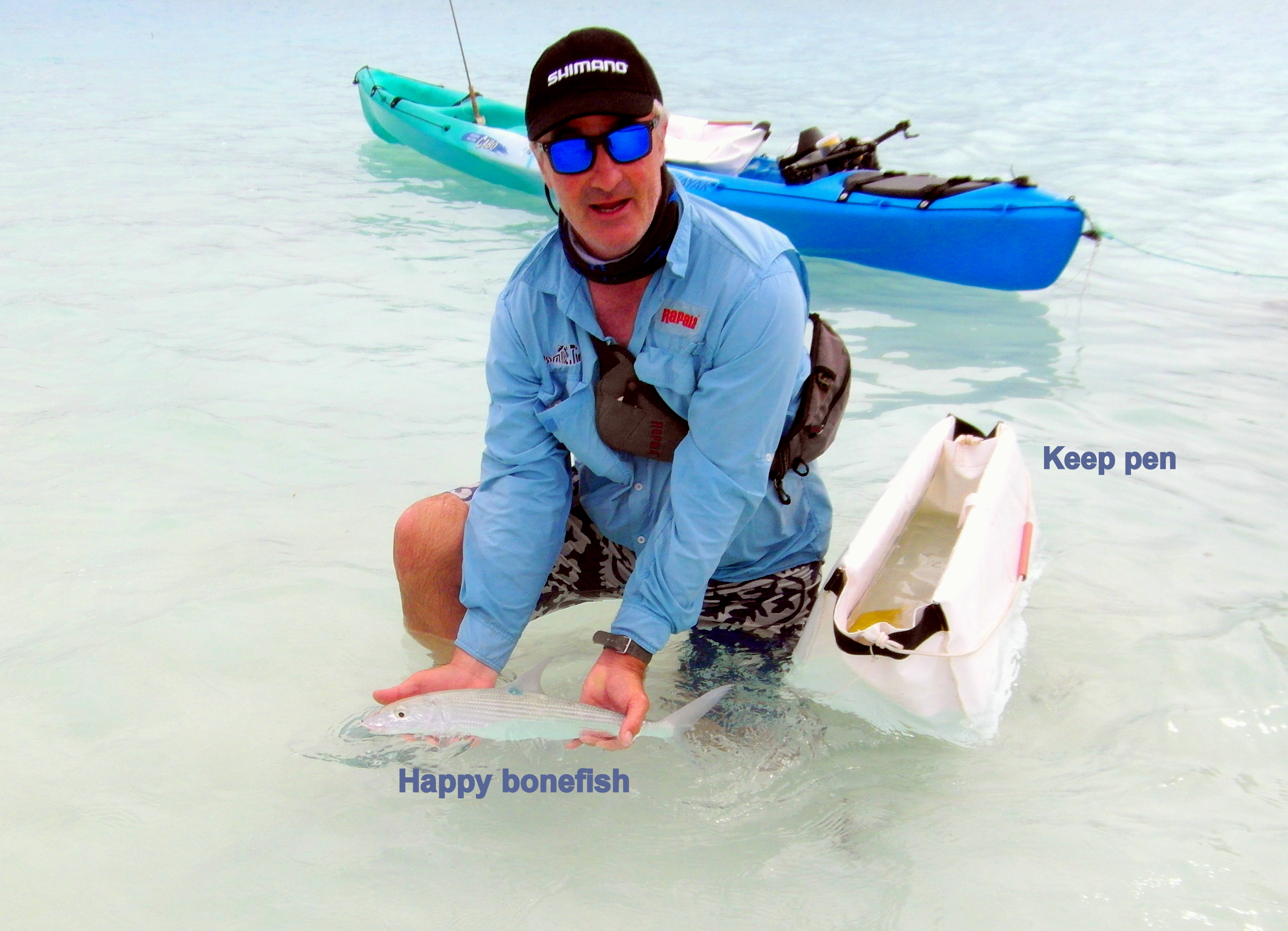 A holding pen for the fish caught isolates their stress signals and helps to divert the predators’ attention. © Photo by Emily Moxham

When fish are caught, they release a stress signal into the water that alerts predators to the location of an ‘easy’ target. To minimise this danger, we have been keeping the fish in an isolated pen during surgery. This removes the scent from the water column and the sharks move away, giving the fish an improved chance of survival when they are released back into the water.

Until now, although sharks were often plentiful at the sites where we were working, we had witnessed no post-release mortality and were confident that the precautions we had taken reduced the chance of the fish we’d caught being subsequently preyed upon. We had one more fish to tag and were looking forward to completing the data set. The bonefish were abundant at the final site and we decided to get the last one we needed for the telemetry study. Within no time it was hooked and being reeled in. The sharks in the area became excited straight away and began to dart around, an indication of hunting behaviour. One bite and the fish on the reel was shark bait. We decided to call it a day and try again another time, when the sharks were less abundant and excitable.

Witnessing at first hand the bonefish being taken highlighted for me some of the arguments about catch-and-release fisheries and why at times their sustainability is called into question, especially when a vulnerable species is the target. It is essential to follow best-practice fishing guidelines, use a holding pen and monitor the behaviour of predators in the vicinity if your fish is to have a ‘fighting chance’ when it is released back into the water.

Project
Fishes of St Joseph: where, when & why?