Saving the best for last

What a whirlwind the past three weeks have been. Between myself and Emily (the other student who is currently at the D’Arros Research Centre) and with the help of Paul, Rainer, Chris, Kerryn and Rhet, we have managed to acoustically tag 30 bonefish and 30 stingrays at St Joseph Atoll.

This has been no easy feat. Yes, we are working in an absolutely beautiful place, but the work is hard. Last week we spent every day out on the boat in the atoll from 8 am to 6 pm. The sun is hot and relentless, you spend the whole day wet from getting into and out of the water, sometimes the wind persists at trying to blow you away, and you spend much of the day on your feet with very little comfort.

But at the end of the day, it is most definitely worth it and I wouldn’t change it for the world. Especially when the last stingray you catch and tag provides you with a magical moment. It was late in the day, the light was starting to fade and we were cruising around the atoll’s sand flats on the prowl for our last feathertail ray. All of a sudden we spotted one and we knew it was the one we had to tag. It was one of the biggest rays we had seen so far and previously we had had little success at catching the big rays. 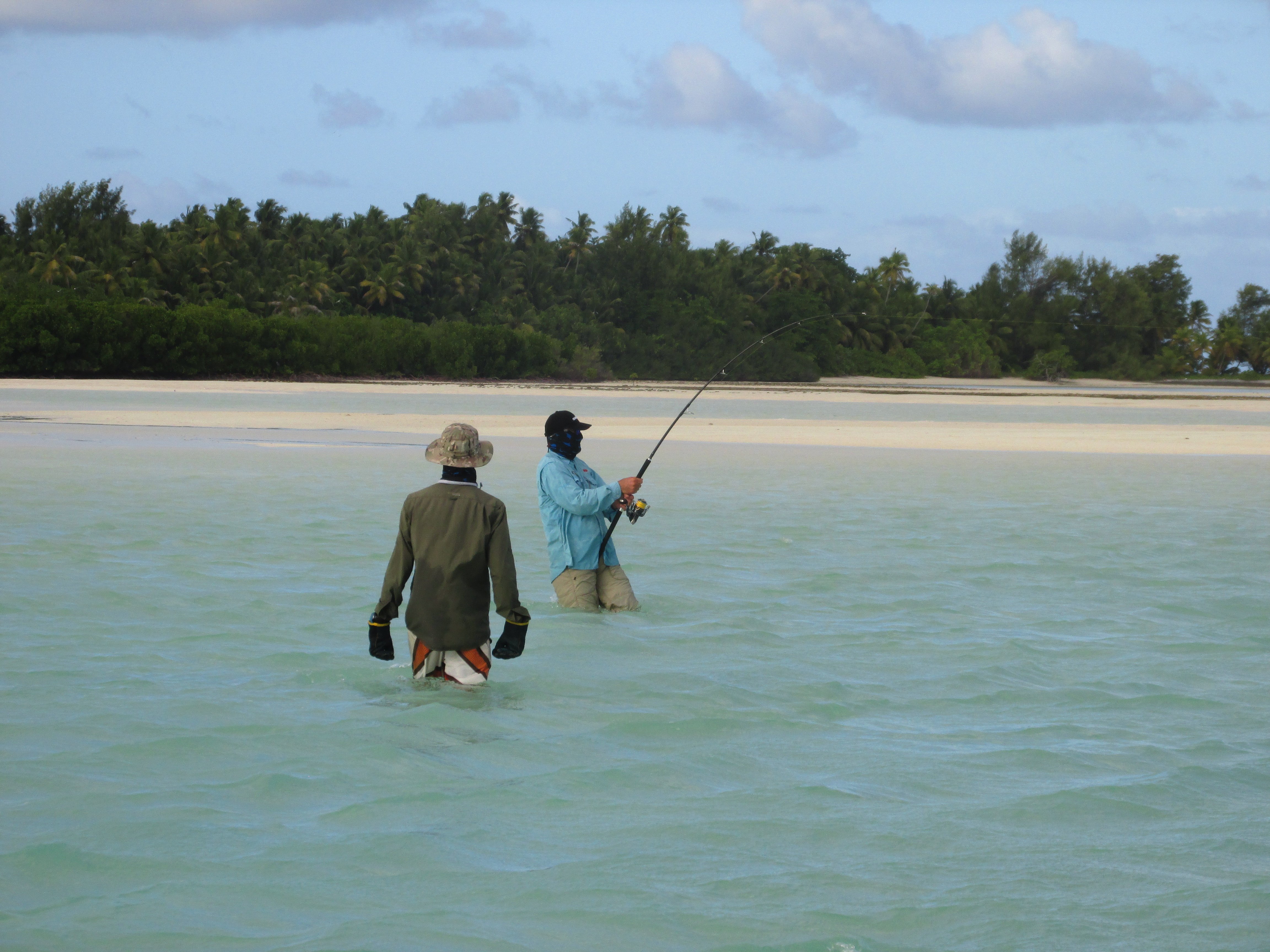 Paul catching a feathertail ray with hook and line, and Chris waiting to grab hold of the stingray’s tail. © Photo by Chantel Elston

As we were trying to sneak up on the ray we got stuck – the water was too shallow for the boat to manoeuvre properly. This meant that Paul (who was catching the rays with a hook and line) had to hop overboard and catch the ray on foot. This put him at a double disadvantage. Firstly, it’s not as easy to see the ray from in the water and secondly, he only gets one shot because once the ray has been spooked it will swim off very quickly. In addition, the current was incredibly strong; it was spring tide at the time and there was so much water flowing into the atoll that it felt as though we were standing in the middle of a rushing river.

Despite all this, Paul made a perfect cast and hooked the ray at his first try! The next 10 minutes of manoeuvring the ray into shallower water were accompanied by joyous exclamations, an eagle ray swimming right past us and turtles poking their heads out of the water. Our ray turned out to be a one-metre-wide mature male, the first mature feathertail we had caught. Success! It was an experience I’ll never forget.