These rays have a body that looks like a shark’s body, but their head is flattened and their paired gills are located on the underside of the head, so their English common names – wedgefish, guitarfish or shovelnose ray, depending on which family they belong to – are apt. Local fishermen refer to these shark-like rays as ‘sharks’, and collectively call all shark-like rays yu kemejan (ikan yu or simply yu is Bahasa Malaysia for ‘shark’).

The rays have a worldwide distribution in tropical and subtropical seas, and a few species even inhabit intertidal and freshwater habitats. In Sabah’s inshore coastal waters the families Rhinidae, Rhinobatidae and Glaucostegidae have been recorded, but none has so far been reported in fresh water.

Most of the shark-like batoids or rays have a benthic or demersal habitat, spending their time feeding on invertebrates and small fishes close to the sea bottom. When not feeding, they rest on the sea floor rather than burrow into its mud or sand, which unfortunately makes them highly susceptible to being caught in demersal trawl nets, a common fishing gear used in the commercial fishing industry of this country.

Taking a yu kemejan as by-catch is a bonus for local fishers, as the large fins and snout (which is also traded as shark fin) can fetch a high price in the shark-fin trade, and the meat of this ray is considered to be of a high quality.

My preliminary analyses comparing Sabah’s shark and ray landings based on fish market surveys in 1996–1997 and 2016–2018 indicate a shift in the abundance of the shark-like batoids, which used to dominate the ray species being landed.

A simple key to the three shark-like ray families recorded from Sabah has been developed: 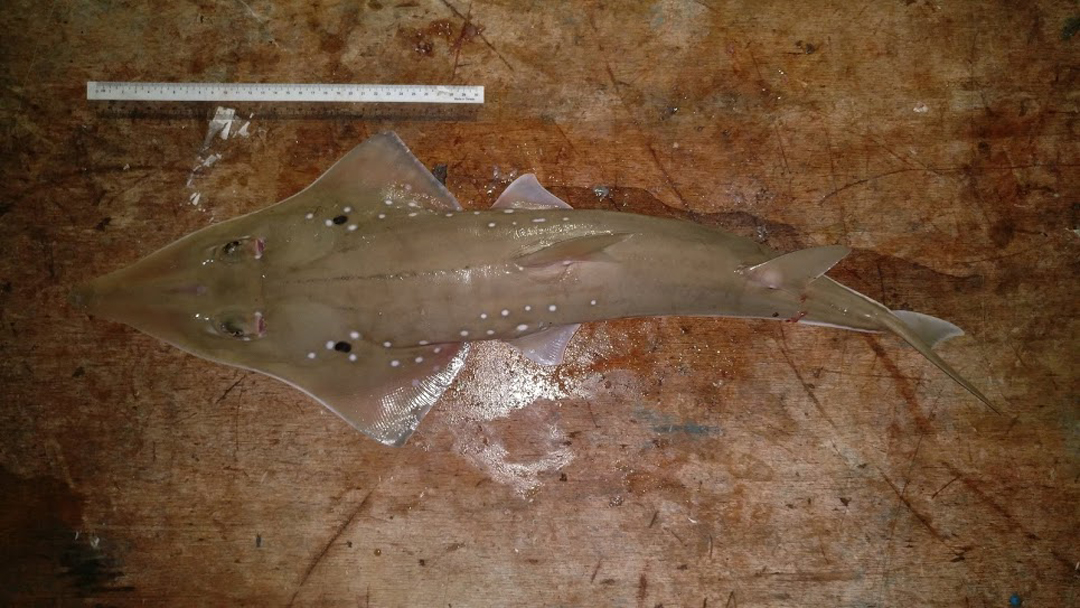 Dorsal view of a bottlenose wedgefish Rhynchobatus australiae (family Rhinidae), with all fins intact, at the Sabah Fish Market Sdn. Bhd. (SAFMA) fish landing site, Kota Kinabalu. The gender of the specimen is determined by the presence (male) or absence (female) of a clasper behind the pelvic fins. Photo © Mabel Manjaji-Matsumoto 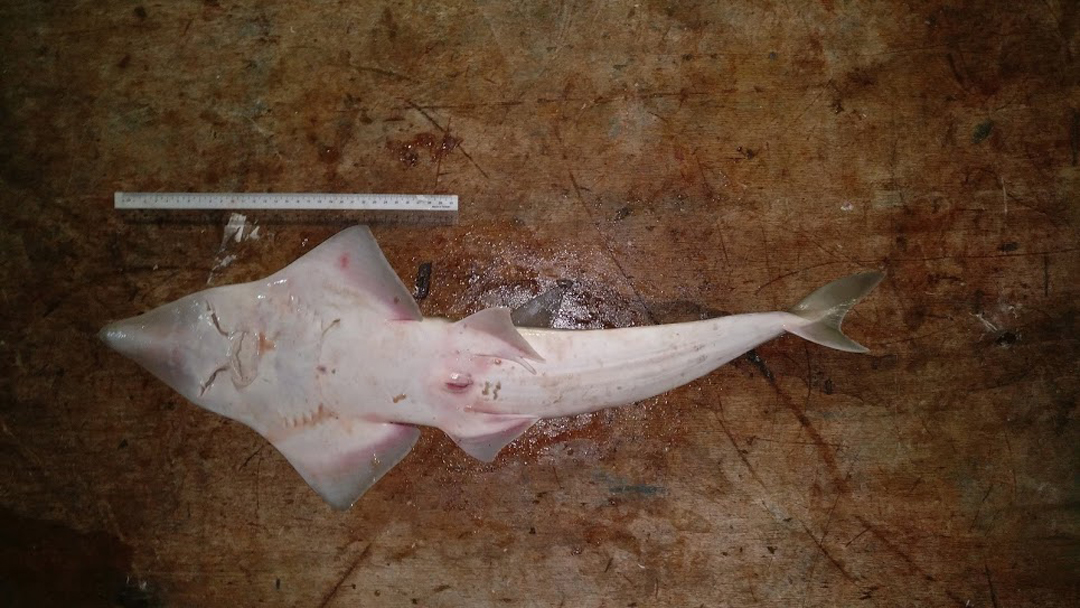 Ventral view of a young male bottlenose wedgefish Rhynchobatus australiae (family Rhinidae), with all fins intact, at the SAFMA fish landing site, Kota Kinabalu. The space between the back margin of the pectoral fins and the front margin of the pelvic fins is indicated by a red arrow. Photo © Mabel Manjaji-Matsumoto 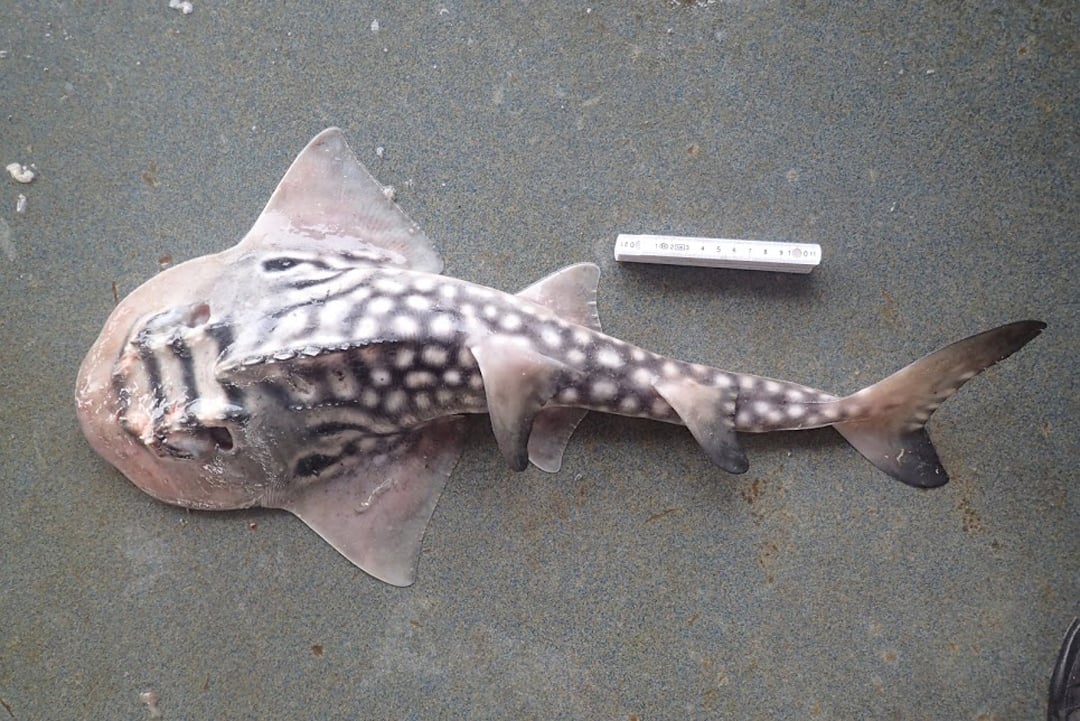 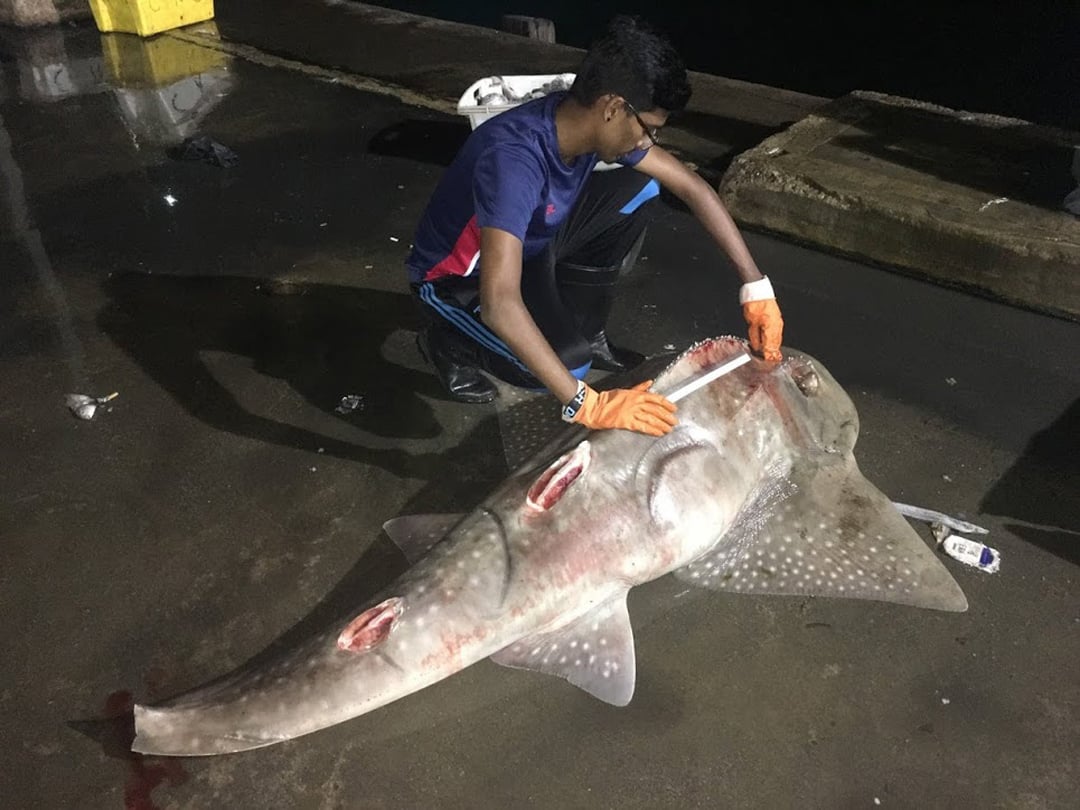 A huge shark ray Rhina ancylostoma (family Rhinidae), with both its dorsal fins and its caudal fin removed, at the SAFMA fish landing site, Kota Kinabalu. Shark rays can grow to 270 centimetres (106 inches) total length. Note that the colour pattern of this large specimen is different from that of a young shark ray, as shown in Photo 6. This photo shows Dhivvian Tharmasegaran, a student at the Universiti Malaysia Sabah and a research assistant with this project, taking basic measurements of the specimen. The photo was taken on 30 November 2017 at 1.26 am. Photo © Mabel Manjaji-Matsumoto 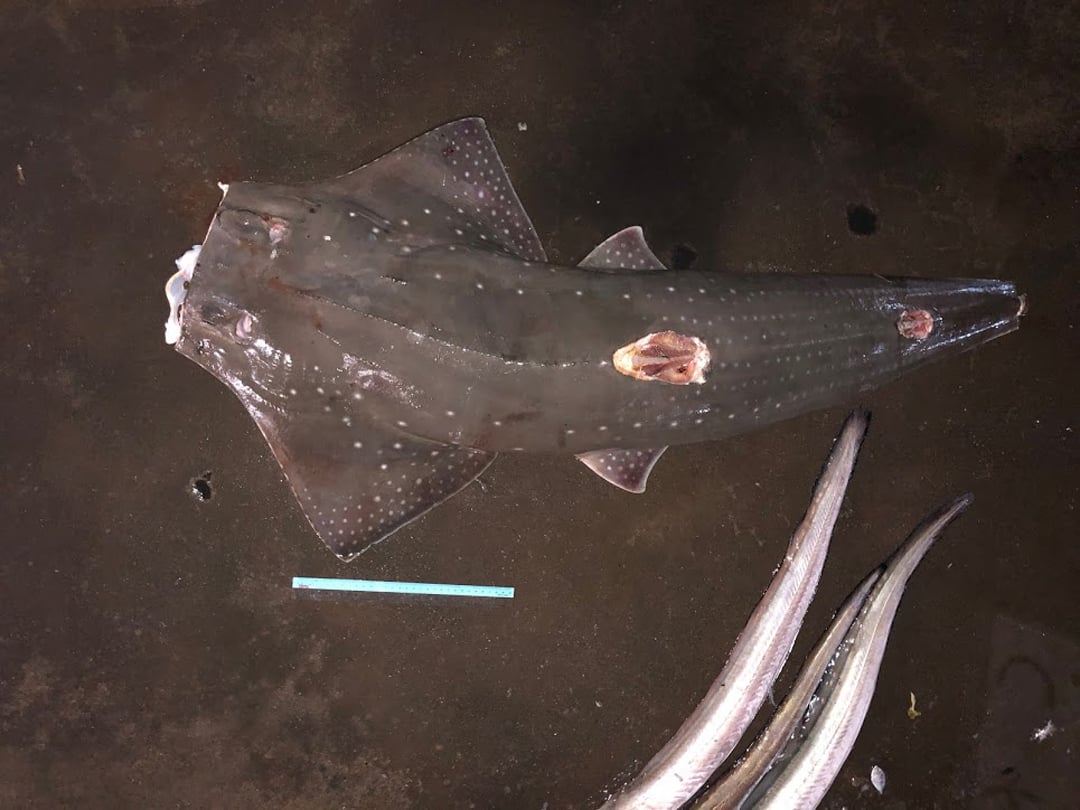 Dorsal view of a broadnose wedgefish Rhynchobatus springeri (family Rhinidae), with both its dorsal fins, its caudal fin and its snout removed, at the SAFMA fish landing site, Kota Kinabalu. The snouts of wedgefishes and guitarfishes are marketed as ‘shark fin’. Photo © Mabel Manjaji-Matsumoto 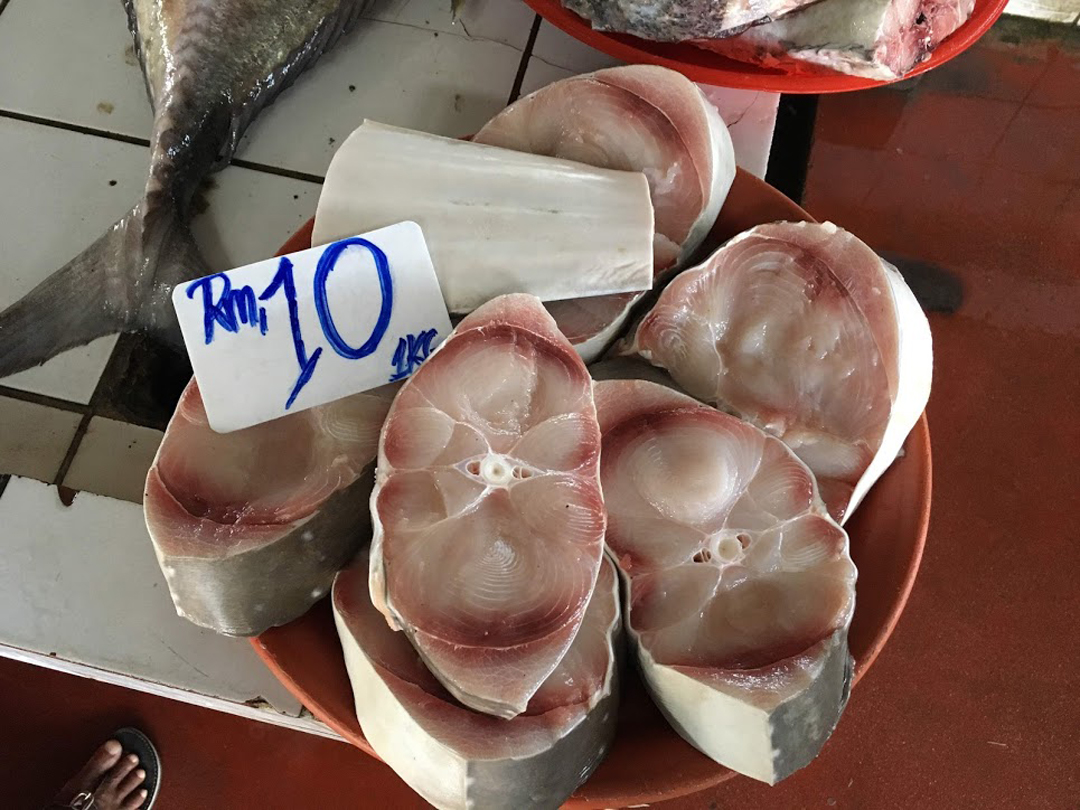 Broadnose wedgefish Rhynchobatus springeri (family Rhinidae) sold as fish steaks at Kudat fish market. Not only do the fins of wedgefishes and guitarfishes command the highest prices due to their large size, but their meat is also considered of high quality and fetches RM10 per kilogram, the highest price for any elasmobranch species. Photo © Mabel Manjaji-Matsumoto 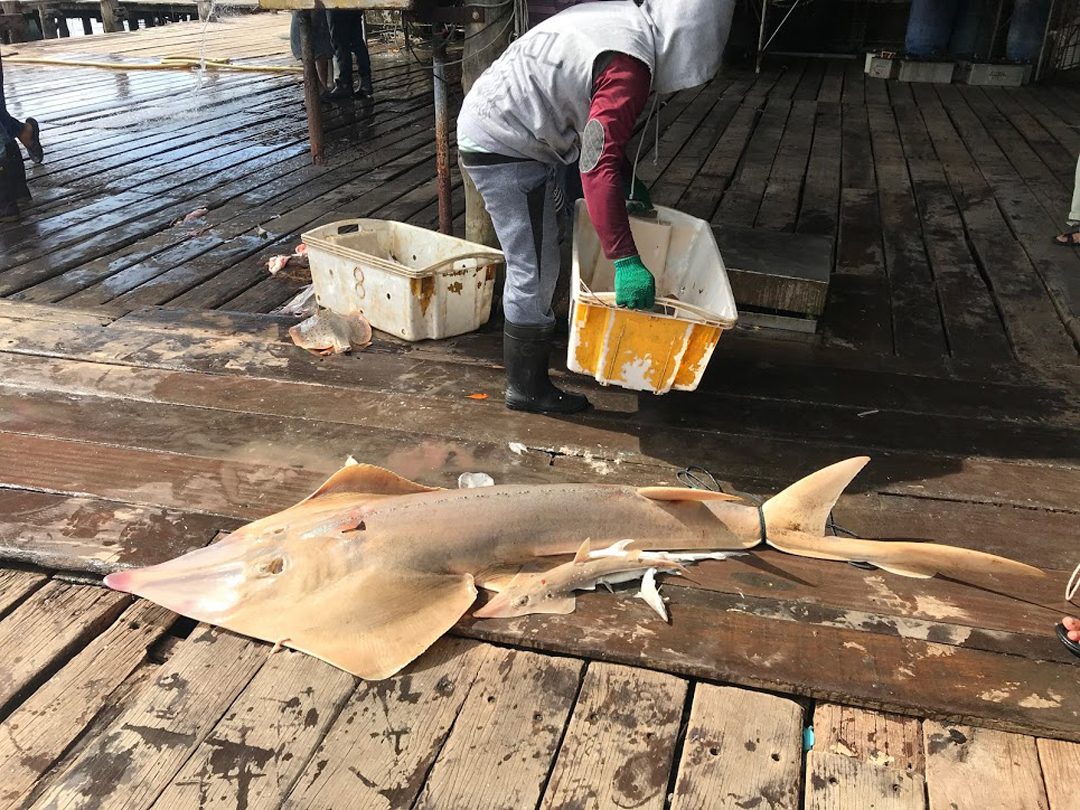 Dorsal view of a giant guitarfish <I>Glaucostegus typus</i> (family Glaucostegidae), with all fins intact. Note that there is no space between the back margin of the pectoral fins and the front margin of the pelvic fins. At 180 centimetres (70 inches) total length, this mature female is bigger than the human standing next to it and really looks like a giant next to the bottlenose wedgefish, which is about 50 centimetres (20 inches) total length. This photo was taken on 30 November 2018, during the monthly survey at Angkasa Lama, a large, privately managed fish landing port in Kudat, approximately 132 kilometres (82 miles) north of Kota Kinabalu. Photo © Mabel Manjaji-Matsumoto

2a. Anterior cranium and base of rostral shaft dark and very sharply demarcated from rest of snout; nostrils long and narrow, with anterior nasal opening rectangular – family Glaucostegidae (Giant guitarfishes) 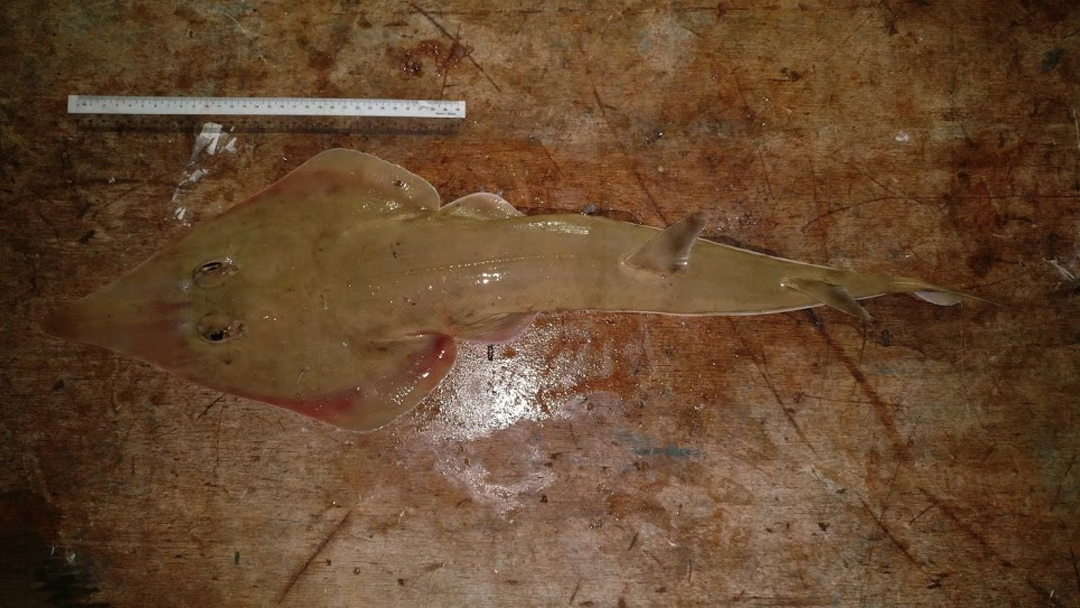 Dorsal view of a Borneo guitarfish Rhinobatos borneensis (family Rhinobatidae), with all fins intact, at the SAFMA fish landing site, Kota Kinabalu. This species is one of the new species of sharks and rays described from the region in 2016, ahead of the publication of the book Rays of the World. Photo © Mabel Manjaji-Matsumoto

2b. Anterior cranium and base of rostral shaft much paler and diffuse, not sharply demarcated from rest of snout; nostrils not greatly elongated, anterior nasal opening circular to oval – family Rhinobatidae (Guitarfishes) 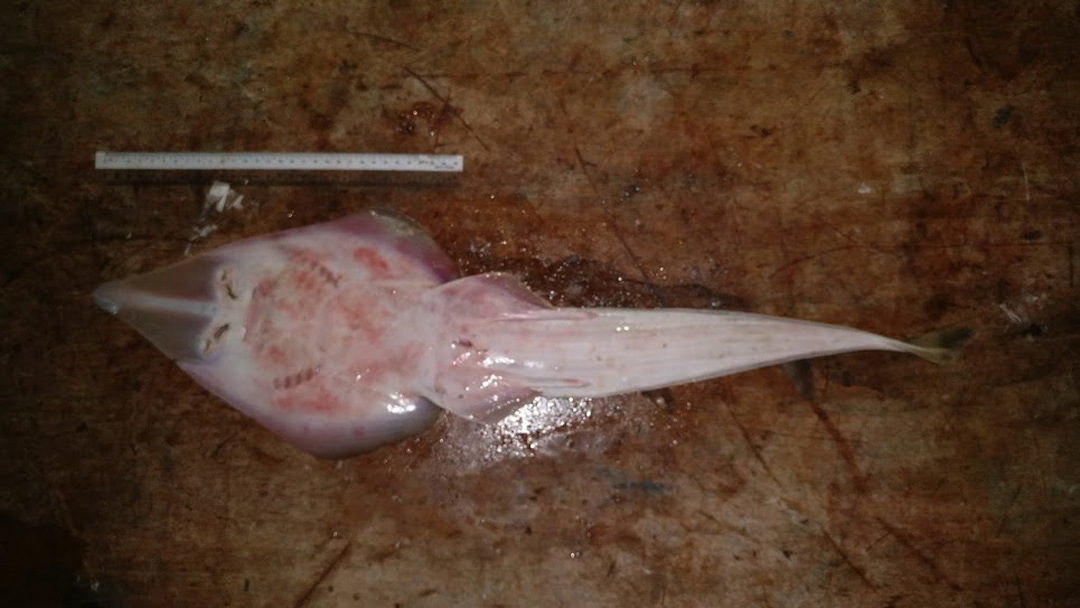 Ventral view of a mature male Borneo guitarfish Rhinobatos borneensis (family Rhinobatidae), with all fins intact, at the SAFMA fish landing site, Kota Kinabalu. Note that although this and the bottlenose wedgefish specimen in Photo 1 are about the same size, the latter is still young and immature, whereas this specimen is already mature. According to the literature, the size at first maturity of the bottlenose wedgefish is approximately 124 centimetres (49 inches) total length, twice that of the Borneo guitarfish (approximately 63 centimetres, or 25 inches, total length). Photo © Mabel Manjaji-Matsumoto

Read more on how sharks are still skinned for fins in Sabah in this news article.