Out on the widest part of the river the air is hot and humid and the water is dark and dirty. Locals call this time of year agua sucia, as the strong showers of the rainy season muddy the waters, pushing sediment and nutrients from upstream, all the way down to mangrove systems at the river mouths. As we leave the main river into a narrow channel, the atmosphere suddenly changes. It is fresher, dusky, and quiet despite the hum of the boat engine. Gliding past huge trunks and dense root structures, shaded by a canopy up to 50m above us, it is easy to imagine we are on a small tributary of the Amazon, yet these are the majestic forests of Terraba Sierpe, Costa Rica, one of the best preserved mangrove systems in the tropical eastern Pacific. 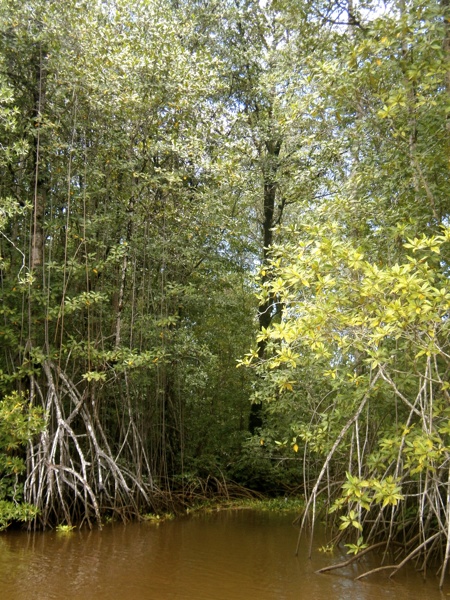 The tropical eastern Pacific region encompasses the Pacific coasts of Costa Rica, Panamá, Colombia and Ecuador. It is an area of extremely high marine biodiversity that supports hugely productive fisheries, and acts as an important migratory corridor for many long-lived, vulnerable species. We are here to identify critical elasmobranch habitat across the region, to assess current health and protection levels, and highlight conservation priorities in conserving and restoring populations of sharks and rays in the tropical eastern Pacific.

During our field phases in Ecuador and Costa Rica so far, we have covered 2322 km of Pacific coast and met with 12 local fishing communities. In many places the story is a familiar one of once plentiful seas and huge catches, having given way to slim pickings and meagre livelihoods. We are interested in learning specifically about the decline of sharks & mobulids along these coastlines, and using traditional fishers’ knowledge of abundance, distribution and seasonality of sharks and rays, to identify potentially critical habitats such as nursery areas. Chatting with as many fishermen as possible, sharing a beer, or spending a day fishing with them in their boat, we press them further for information. Sometimes we are invited to their homes, and sucking on sweet pineapples they tell us of their biggest catches, their dicing with death and their plans for the future.

Initial data from our interviews show very low current and historical incidence of mobulid rays in coastal areas in Costa Rica and Ecuador outside of known aggregation sites of Isla de la Plata (Ecuador) & Isla del Caño (Costa Rica). On the other hand, anecdotal evidence suggests massive declines in elasmobranchs in the two major gulfs of Costa Rica (Nicoya & Dulce). In many small towns around the gulfs we hear a common insight:

“This gulf used to be full of sharks. Nobody would swim. You could see the fins on the surface. Now the children swim all day long without a worry“. 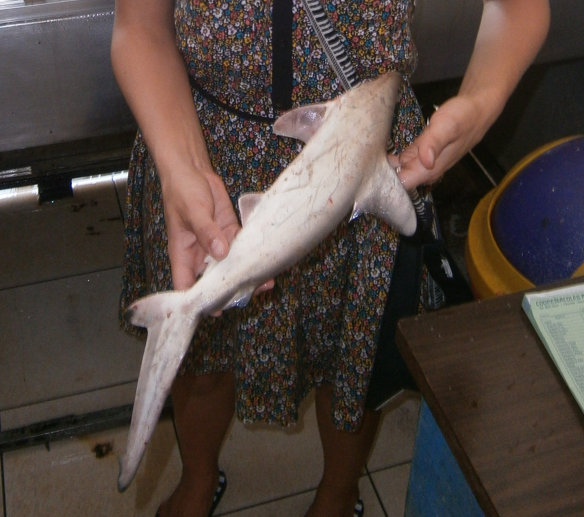 We were shown pictures of shark catches from only 15 years ago. Gravid bull sharks containing fully developed pups lying slain on the shores of Golfo de Nicoya, lead us to believe this area could be an extremely important nursery area. Sharks are clearly disappearing rapidly from these waters, and the frightening part is that it has happened in living memory.

Artisanal fishermen of the Golf of Nicoya lay the blame on high numbers of fishers invading from neighbouring areas and setting destructive gill nets in mangrove areas nearby, which despite being prohibited, goes unpunished due to a lack of enforcement. Local fishermen must tackle high prices of fuel, diminishing resources, failed negotiation with the government, and the disappearance of their culture, as many youngsters feel more attracted to easy money, and drift apart from the fishing tradition of the family.

There is good news however, as local fishermen are gradually organising themselves in the fight against unsustainable practices pushing in from outside, by forming cooperatives and designated artisanal fishing areas, called responsible fishing zones, that ensures them greater management control and fishing rights in their area. It is hoped this will have a positive effect on populations of local shark species that utilise mangrove systems as pupping and nursery grounds, by reducing the number of destructive gill nets targeting these crucial areas. Initial tagging work carried out by Costa Rican NGO Misión Tiburon, shows that a high relative abundance of juvenile scalloped hammerhead sharks can still be seen in some areas of Golfo Dulce, so these changes cannot come soon enough.

In elasmobranch conservation, restoring populations relies as much on protecting critical habitat as it does on limiting damaging fishing practices. If we want to foster growth of such long-lived animals, we need to promote greater holistic protection for habitats critical during certain key life stages. Our initial data shows that these gulf systems are clearly important for elasmobranch developmental life stages, with anecdotal incidence of juvenile bull & hammerhead sharks, and whale sharks in these waters. It is our firm belief that greater protection of these habitats will pay dividends not only in the conservation of long lived elasmobranch species, but also in promoting the recovery of locally important fisheries stocks.

Watch this space for more updates of our project, as we move on to Panamá & Colombia.