A photograph of an emaciated polar bear at the brink of starvation has been the social media sensation of the past few weeks, bringing large-scale climate issues to the forefront of the news. It is disappointing that strong images like this are required to stir people into thinking about the perils of a warming planet. To scientists, climate change is happening at an alarming rate, but to the layperson the timeframe over which it is likely to affect them is too large to matter much more than a casual ‘Hmm … shame’. A rise in sea level only scares people living in the Maldives and other places in reach of the lapping waves.

One of the images of an emaciated polarbear which went viral on social media last month https://www.facebook.com/kerstin.langenberger.photography © Photo by Kerstin Langenberger Photography

The most prevalent cause of species’ extinctions (and the disappearance of biodiversity) is the loss of habitat. In the case of polar bears, their habitat is melting away – and with it go opportunities to catch their favoured prey of seals. Habitat loss is accelerated by climate change, as rising sea levels, melting ice and temperature changes cause animals to shift out of their native range and into places they cannot navigate, and to hunt prey they are unaccustomed to catching. This reduces their ecological resilience and their ability to survive long enough to reproduce.

In Central and South America we work to identify critical habitats for sharks and rays. More often than not, these critical habitats are mangrove forests at the interface of land and sea. This near-shore environment is disappearing at a rate higher than tropical rainforests and coral reefs because of deforestation, coastal development, aquaculture and agriculture. However, the loss of mangrove forests will affect not only the sharks and rays that seek food and shelter in them; it will also affect humans directly, whose coastal cities and villages will be more exposed to natural disasters and a rise in sea level. 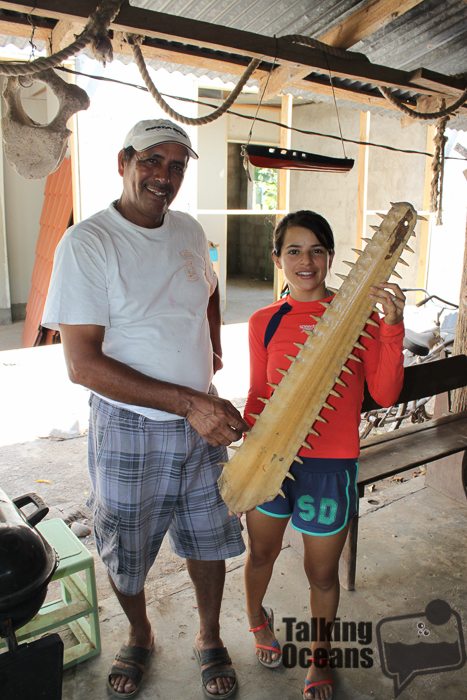 Fishermen usually keep the rostra of sawfish to decorate their houses. © Photo by Talking Oceans

Part of our work involves finding clues about the current and historical distribution of the largetooth sawfish, a fish that lives in river estuaries and mangroves and has been targeted in some parts of the region for its fins and rostrum for many years. However, so far it feels as if we are dealing with a ghost. The most recent sightings are believed to have taken place about four years ago and we do not know if any of these sawfish are left. If some are still around, we don’t know where their last remaining refuges are located. Even if we do find the last remnant of the population, how do we convince people that their protection has to be prioritised? What powerful images can we display to promote the protection of a fish no-one has ever seen? 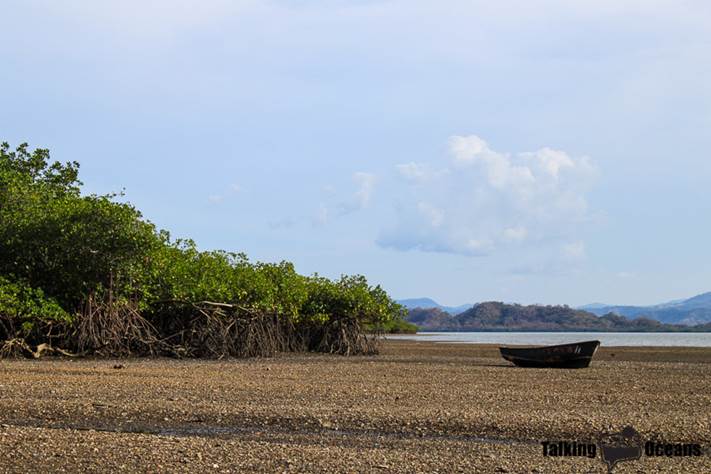 Mangroves on the Pacific coast of Central and South America are important nursery habitats for fish, sharks and rays. © Photo by Talking Oceans

It is critical that we continually remind ourselves how essential our work is. What will the results be? Not one or other report detailing where we went and how we spent the money, but rather what positive changes will our work bring about? There is every chance that we are acting too slowly, identifying species’ declines too late to make a difference, but we must strive to leave the world in a better state than we found it. Our work in mangrove forests is valuable not only for the species we are trying to protect, but also for the people who live and depend on natural resources – and that makes it invaluable.