‘Big Brother’. For anyone reading these words who also knows George Orwell’s novel 1984, a negative image of a society under total surveillance by the authorities will probably come to mind. To me, they signify an opportunity to better understand distribution patterns of free-ranging animals, such as sharks and rays, and thus aid conservation initiatives and ecological forecasting.

Big Brother at Bimini Biological Field Station (Shark Lab) recently received a boost from Ocean Network to illuminate potential highways of migration by placing an array of acoustic receivers along the drop-off of the Gulf Stream between Cat Cay and Great Isaacs. Every time a shark or stingray that has been implanted with an acoustic transmitter comes within range of a receiver, it will be recorded. Currently the array consists of about 70 receivers. So, you might ask, how does Shark Lab prepare to offload so many receivers twice a year? And what are the potential worries the crew has to cope with on a daily basis while maintaining the array? The process of offloading can last anything between one and several weeks and requires plenty of planning. For example, our small skiffs make it easy to manoeuvre in shallow water when the sea is calm whereas our larger skiffs are better equipped to handle rough seas, although above a certain threshold even they have to yield to the weather. Rain is a big issue; when doing in-field offloads, we can’t use laptops in the rain. Once we have chosen a window of clear weather, we have to plan our trip to maximise both fuel efficiency and the number of receivers that can be offloaded in a single day. At the same time, we’re hoping that the weather forecast is right and conditions don’t change abruptly – trust me, this has happened! 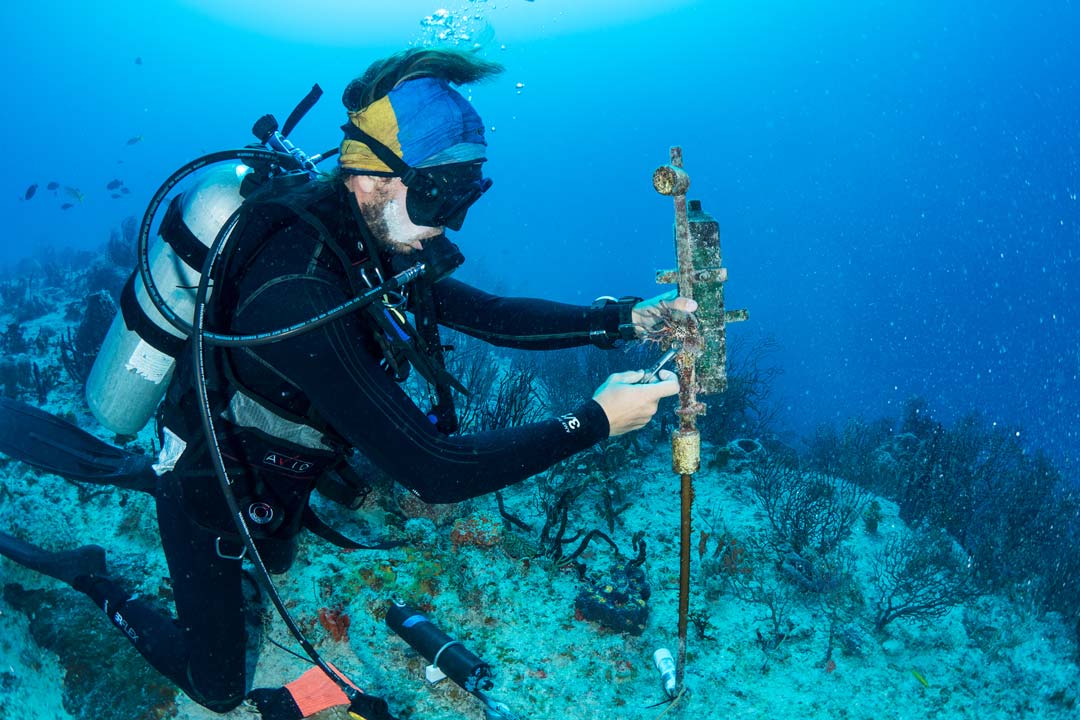 An acoustic receiver is being switched out. The receiver will contain data from the past 6 months and has logged every time an animal implanted with an acoustic transmitter swam in proximity. Photo by Eugene Kitsios | © Bimini Biological Field Station Foundation - Sharklab

Before heading out, we need to make sure we have all the equipment: GPS, marker line, scuba gear and tanks, and wrenches for unscrewing receivers from custom-made mooring hardware coated in WD-40 to prevent rust. Before you know it, the boat is packed to the gunwales. Typically, days in The Bahamas are warm and sunny, inviting you to relax, but I am always tense when leaving the dock at first light, since I never know what to expect. In the past we have encountered broken receivers (probably hit by boat engines), missing receivers or receivers whose mooring has been pulled out by a boat anchor, leaving the receiver to its fate in the ocean. And the worry doesn’t stop there. Even when we successfully retrieve a receiver, there’s always a chance it malfunctioned and that valuable data have been lost. But having retrieved it, we do a quick clean, an offload and a hardware swap, then redeploy it. Till we meet again in six months’ time, stay safe!