Forget gold, we are all about bronze this season…

The bronze whaler or copper shark (Carcharhinus brachyurus) may not be a household name for many of us unfamiliar with the lesser known shark species that occur in South Africa’s coastal waters. After all, their reputation does not precede them quite as dramatically as that of the white shark (cue ominous Jaws music), but nevertheless, these sharks play an important role as predators in our marine ecosystems. Their name may be somewhat misleading, as bronze whalers (or “bronzies” as they are more affectionately known) primarily feed on baitfish such as sardines, as well as smaller sharks and other petite prey items such as squid. Apart from potential scavenging, these sharks are certainly not up to the task of taking down a whale. So, why “whaler”? Well, the name dates back to the days when commercial whaling was a big industry, and crews aboard these vessels would observe different sharks aggregating in the slicks that were created by harpooned whales. Paired with their distinct colouration, this led to the term “Bronze whaler” – and the name has stuck. 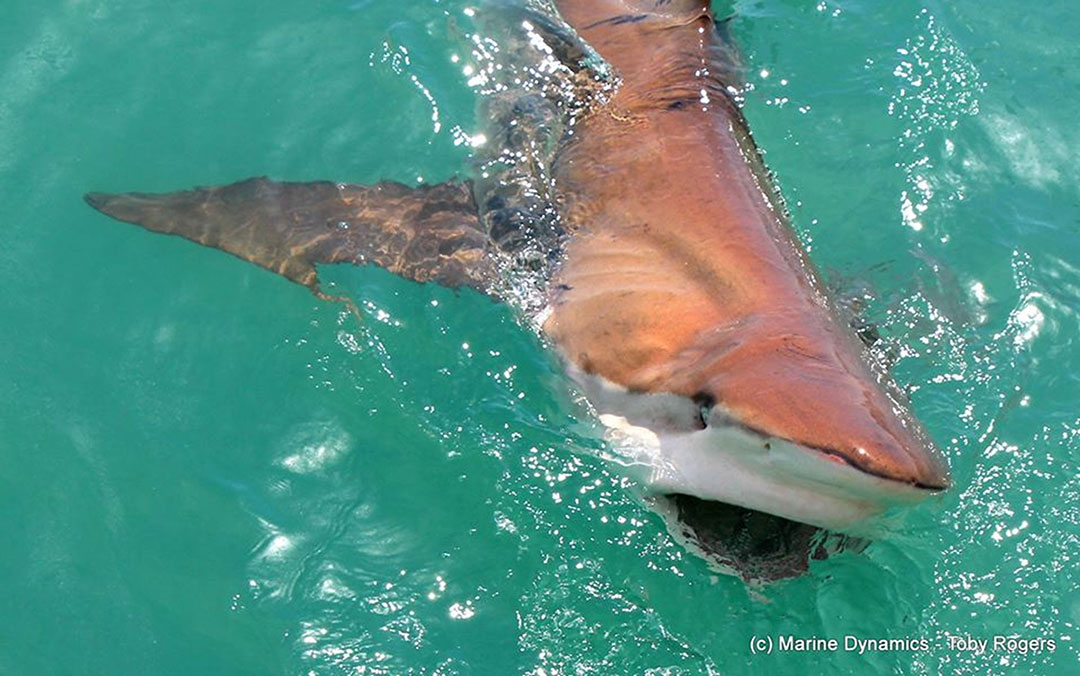 Bronze whalers or copper sharks are named for their distinctive colouration, which makes them easy to distinguish from other species. Photo © Toby Rogers | Marine Dynamics.

Bronzies have a broad distribution in warm temperate and subtropical seas worldwide and are a common species along the South African coast. These large, wide-ranging predators reach over 3m (11ft) and occur from shallow inshore bays to the deeper waters of the continental shelf. These wily sharks are not to be underestimated – despite clocking in at half the maximum size of a white shark, bronzies are effective predators, making up for their smaller size by using numbers to their advantage. Cooperative hunting is frequently observed in this species, in which individuals will work together to herd fish into a closely packed “bait ball” before taking turns lunging through this mass of prey to gorge themselves on the hapless fish.

So, what do we know about our local bronzies in South Africa? Well, these sharks are most frequently observed along the east coast in the winter months, where they aggregate to feed on the masses of fish that make up the annual sardine run. In the Western Cape, they are often seen close inshore in the summer months, usually when shoaling baitfish are present. Interestingly, with the recent decline in white shark numbers in False Bay, as well as other hotspots such as Gansbaai, bronzie sightings have been on the increase in these areas. In fact, if you have heard the shark siren go off in Muizenberg or Fish Hoek this summer season, it was very likely because a large bronzie was a little too close for comfort. Now a good question to answer at this stage is whether bronzies pose the same risk to water users as white sharks… The short answer is no, however they are still large sharks, and the International Shark Attack File has recorded a handful of unprovoked bites by bronzies, mostly in Australia, with just one recorded in South Africa. Although people definitely don’t fit the bill as a prey item, these voracious predators can get quite carried away when they are feeding on fish in the inshore zone, so as a precaution, Shark Spotters will sound the siren and clear the beach if a bronzie is sighted close to water users. 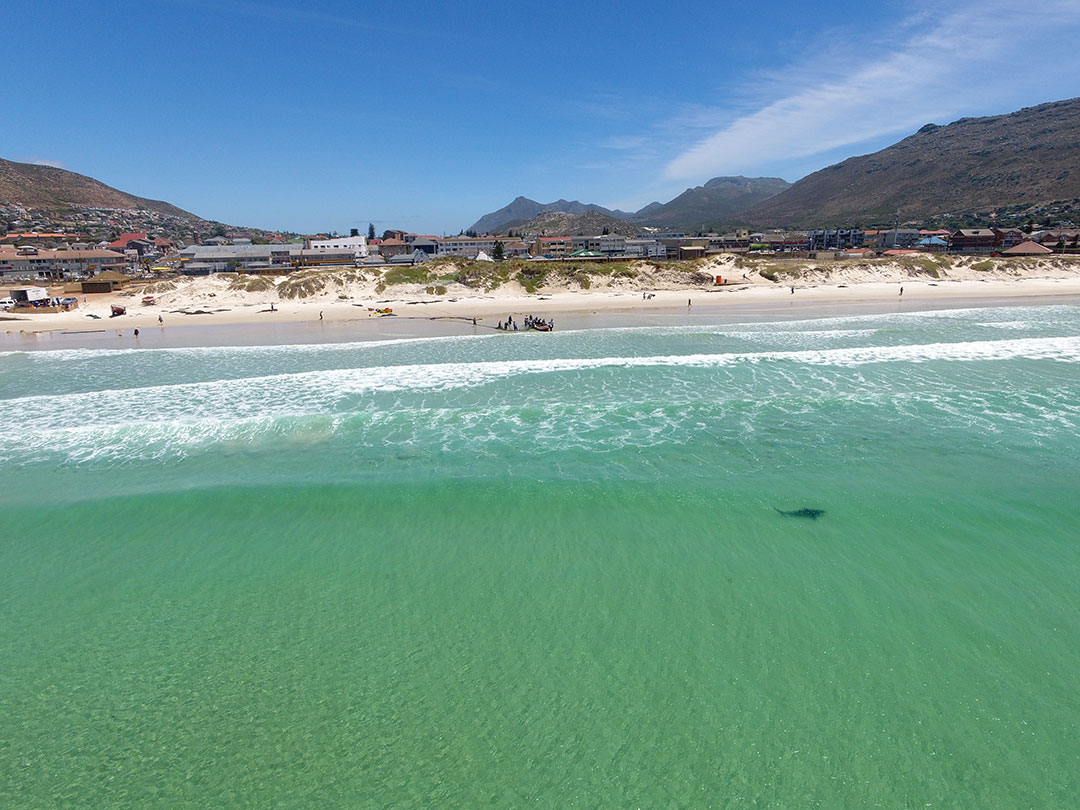 So why do we want to know more about bronzies in South Africa? Well, firstly, this species represents another piece of the complex puzzle that makes up our coastal ecosystems, and their altered behaviour in the absence of white sharks raises some intriguing questions about their role in the ecosystem, and how this seems to change under the dynamic processes of competition and possible predation (did someone say orca?). Furthermore, despite their broad distribution in South Africa, there are large gaps in our understanding of their movement patterns, trophic interactions, population dynamics or habitat use on a fine-scale in coastal areas such as False Bay, or more broadly along the South African coast. This is problematic as commercial fishing for this species is ongoing, not just in South Africa but in many areas around the globe, and they are classified as near threatened on the IUCN Red List of Threatened Species. Interestingly, while many shark species are targeted by the infamous fin trade, bronzies are one of the few that are harvested for their meat. Shark meat is not hugely popular, and although there is little demand for this product in South Africa, the Aussies love it. In fact, the main component in their fish and chips is often shark! However, it is often marketed as ‘flake’ or ‘lemon-fish’, which is at best non-descript, and at worst downright misleading to the average Joe who is oblivious to the fact that he is chomping down on a hunk of beer-battered bronzie. (For a full rundown on the shark meat trade originating from South Africa, see our previous blog here). 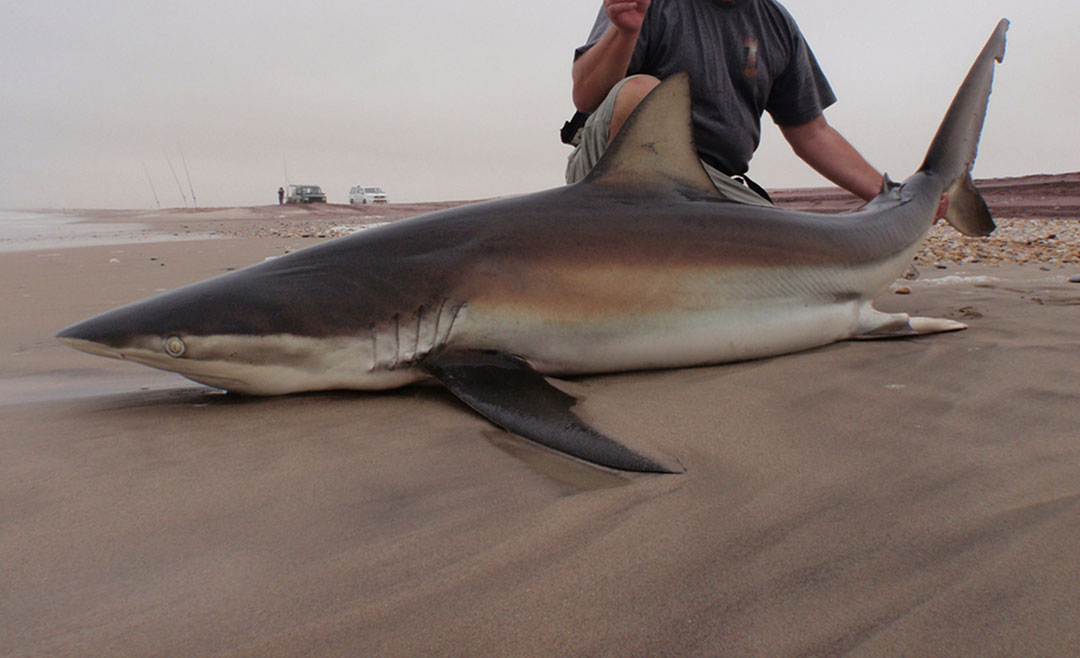 So, what do we know so far? Through long-term tag and recapture data supplied by the Oceanographic Research Institute’s cooperative fish tagging programme (ORI-CFTP), we have learned that this species is capable of vast coastal migrations (>1000km). Examples of this include sharks caught and tagged in False Bay that were recaptured all the way in Namibian waters. But while they have the capability to traverse large distances, they have also been recaptured in the same area after being at liberty for multiple years. This demonstrates an innate ability to navigate back to a specific area, a trait known as philopatry, which is relatively common in sharks. However, while this simplistic tagging data gives us an early understanding of the occurrence and population connectivity of this species regionally, it does not answer the questions of what they are doing in between release and recapture, and why. This is where we will try and expand our understanding of the movements and behaviour of this species using acoustic and satellite tags. These tags allow for finer scale monitoring of a subset of the population, where we will attempt to tag individuals across a range of sizes and both sexes. This is important in order to yield data that are representative of the species as a whole. In addition, we will collect environmental data throughout the study period in order to understand how the environment may influence the movements and behaviour of bronzies. Finally, to determine where they rank on the False Bay food chain, we will use stable isotope analysis to investigate the feeding ecology and key prey species of bronzies.

This project builds on research undertaken over the last decade focusing on the ecology of large shark species such as white sharks and broadnose sevengill sharks in False Bay. Ultimately, we will be able to understand more about how these species interact with each other and with the environment, and their respective niches within the food web. The umbrella project that this research forms part of will allow for a more comprehensive understanding of how large sharks utilise coastal areas such as False Bay, as well as the broader coastline of South Africa, in order to unravel the localised and regional movements and behaviours of important apex predators. With the varying levels of protection afforded to different shark species around South Africa, this research will feed into human-shark overlaps and how best to meet the interests of all those involved.