The identification of two main sawfish hotspots in Costa Rica has made it a key site for the Global Sawfish Search project to undertake surveys using environmental DNA (eDNA). One of the most important hotspots in Costa Rica is in the Northern region, an area that a pioneer sawfish researcher, Dr Thomas B. Thorson, explored during the late 70’s and early 80’s. It was in this region and in the Northern Caribbean of Costa Rica that Thorson conducted some of the first tagging and active tracking studies of largetooth sawfish using red balloons. 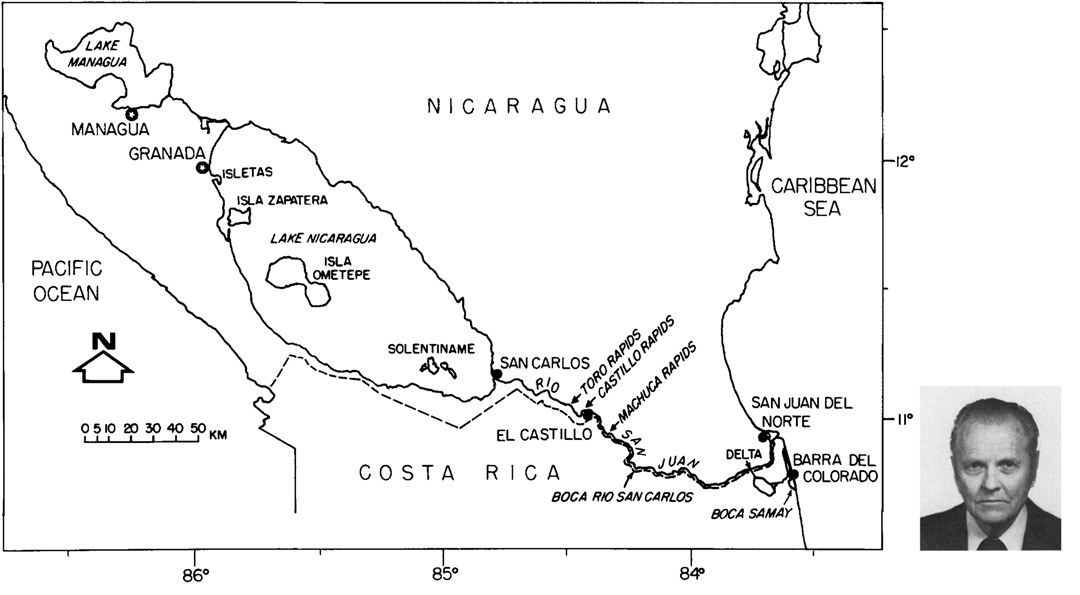 T.B. Thorson and his sampling sites in the Lake Nicaragua – San Juan River System. Copyrights: map and portrait taken from: Thomas B. Thorson (1982) The Impact of Commercial Exploitation on Sawfish and Shark Populations in Lake Nicaragua, Fisheries, 7:2, 2-10.

Thorson’s seminal research encompassed the Lake Nicaragua – San Juan River System, which is where northern Costa Rica meets Nicaragua. The water of the San Juan River runs into Costa Rica through the Colorado River, where it empties in the Caribbean Sea, its outlet is an important movement point for largetooth sawfish. Thorson’s sawfish research was carried out at several stations along the entire system, as he understood that the largetooth sawfish would move along the entire length of the system, around two hundred kilometres to reach the Colorado River outlet. One of the stations was Boca San Carlos, a riverine village where the Costa Rican San Carlos River flows into the San Juan; the other one was Barra del Colorado, a riverine/coastal village near the mouth of the Colorado River. 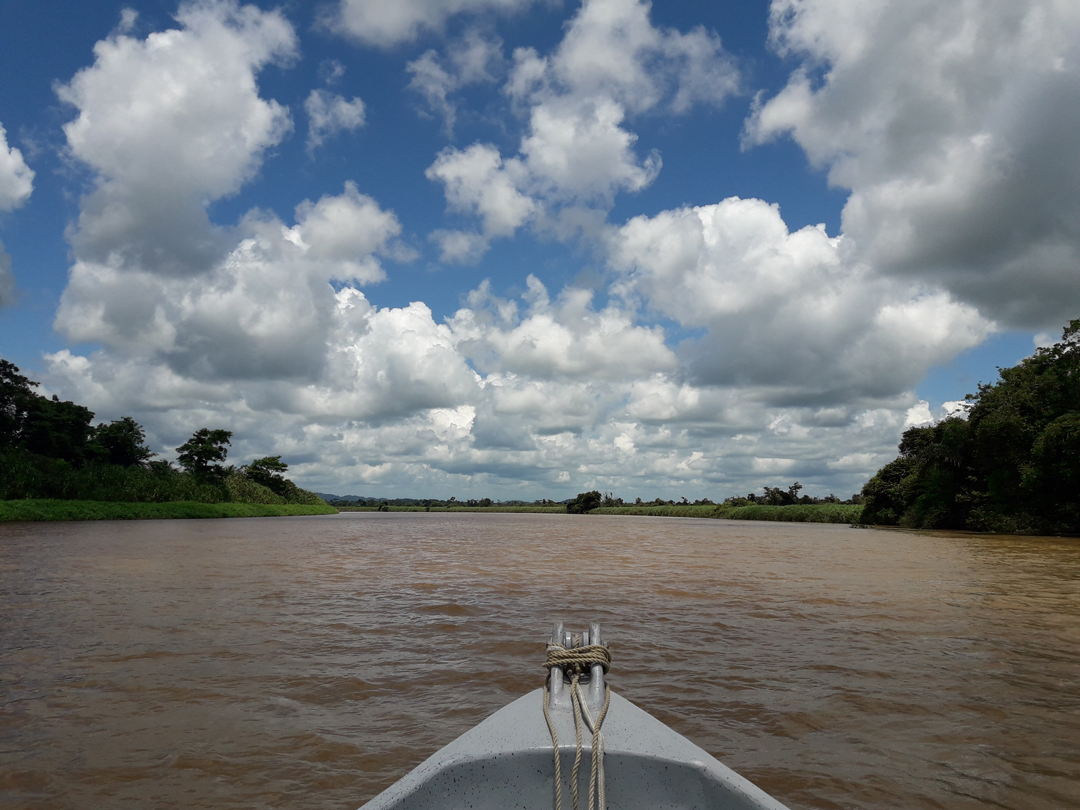 A narrow section (130 m) of the murky Colorado River, it reaches +700 m wide near its outlet in the Caribbean Sea. Photo © Isaac Chaves

Forty years later, we tried to retrace Thorson’s steps in these locations. We were armed with an eDNA field kit, employed the help of key local people and were optimistic that sawfish were likely to be present in both Boca San Carlos and Barra del Colorado, based on recent sawfish sightings/captures. 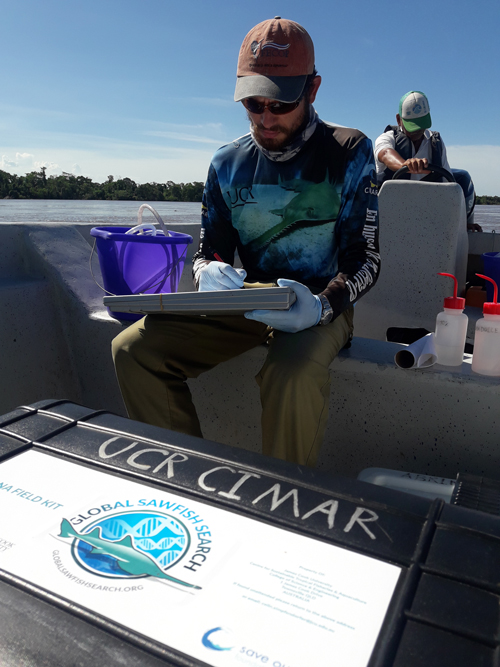 However, sampling eDNA in Barra del Colorado at Thorson’s exact positions was a challenge because his fishing stations were not clearly specified in his work. Shark researcher, Isaac Chaves, and I had just met with our boat captain, Don Jesús Chaves, and were taking the first set of eDNA samples when Don Jesús asked about how we chose the sampling sites. We answered by saying that we did our best to base our study sites on those used by a famous sawfish and bull shark researcher in the late 70’s and early 80’s, to which Don Jesús replied:
“By mere chance, would that be Dr Thomas Thorson?” 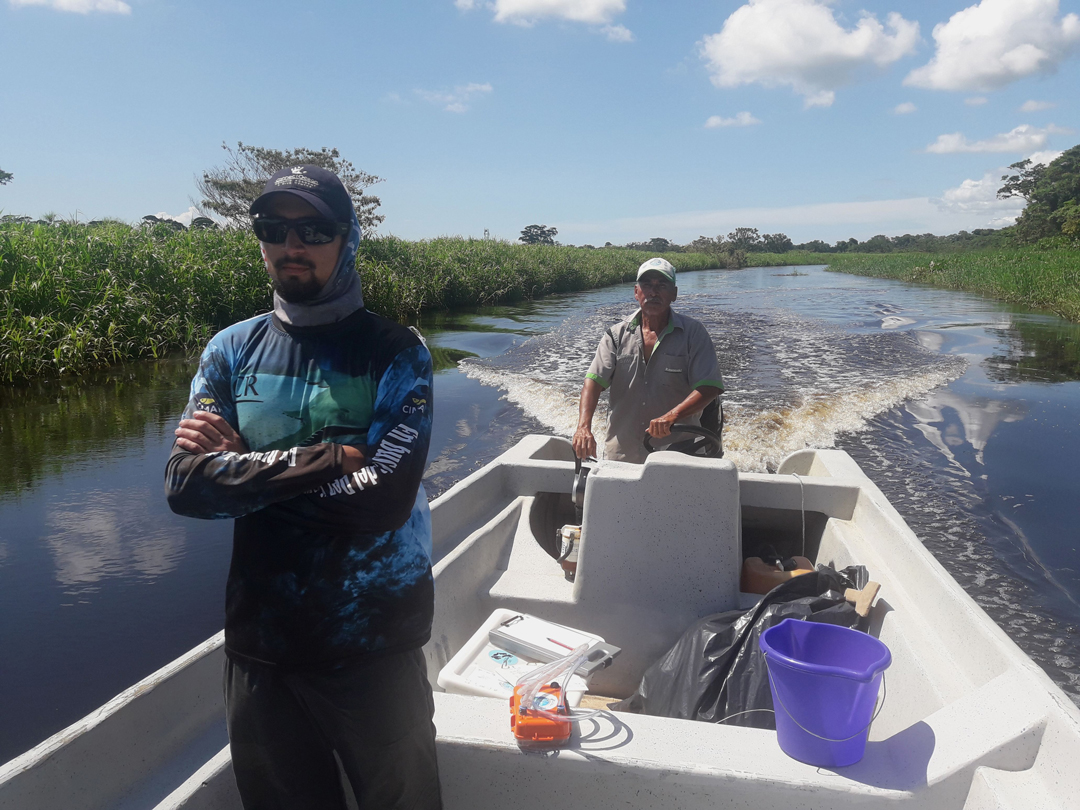 Isaac and I were shocked and immediately asked how he knew about Thorson. He explained that as a teenager he worked for Thorson fishing for bull sharks and that he knew the fishing sites used to catch sawfish in the 80’s. With this exciting news, we refined our eDNA sampling sites on the fly. With Don Jesús’ knowledge, we were able to retrace the footsteps of Thorson to try and catch eDNA of sawfish in the caños and lagunas of Barra del Colorado. 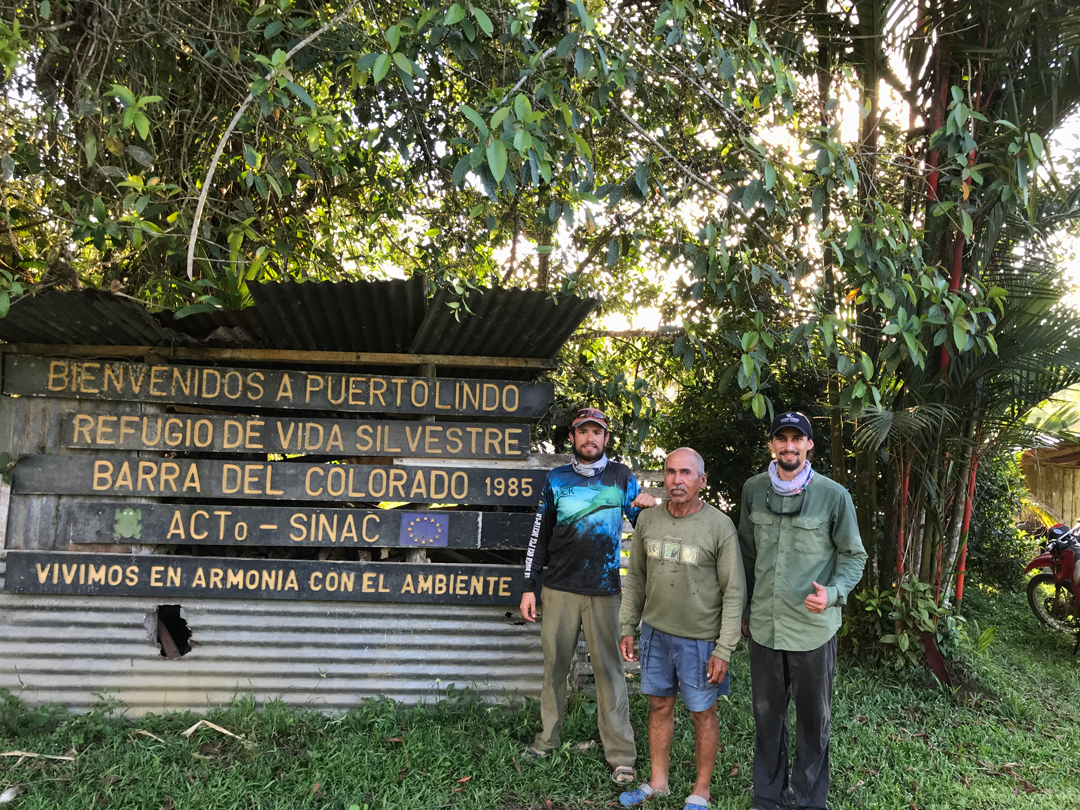 Working with Don Jesús was a great experience. He shared lots of sawfish and bull shark stories, his knowledge of the Colorado River is priceless. Photo © Jorge Valerio

Don Jesús’ role in our sampling effort was invaluable; he is a lifetime fisherman and a community leader, which makes him a great ally in our sawfish conservation efforts.

I’m now in Australia working with the Global Sawfish Search team processing the eDNA samples from these surveys and will report back once we get positive detections from this historically important system identified by Dr Thorson.