It is 6:30am, a full moon and high tide — perfect conditions for mantas. I am one of the first people to see the rays of today’s sun but am more interested in the dark shadows being cast under the waves. As I am effortlessly pulled past the reef by the ripping current of the manta channel, I clutch at my pole spear with my fingers tightly crossed.

I have travelled to the other side of the world to join my friend and colleague Steve Pollett’s manta ray project on Barefoot Island in the Yasawa’s of Fiji. Amongst the two wandering manta species are two distinct colour morphs, black and chevron, whose frequencies vary across the globe. The highest frequencies of black morphs are seen in Indonesia and the South Pacific; in Fiji, the frequency of black morphs is around 60% offering a unique opportunity to collect tissue samples for the manta ray genetics project. Barefoot or Drawaqa Island sits on the edge of a channel providing critical feeding habitat for mantas and from the tip of its northerly beach, it is almost possible to see the rays breaking the surface as they arrive. The samples we collect are like gold dust and I quickly and carefully process them in our makeshift laboratory under the intense and captivated eyes of the Fijian dive masters who are eager to absorb all the information they can. However, our efforts are short-lived. The wind has changed leaving a flat and empty sea and the elusive mantas have disappeared deep into the unknown. 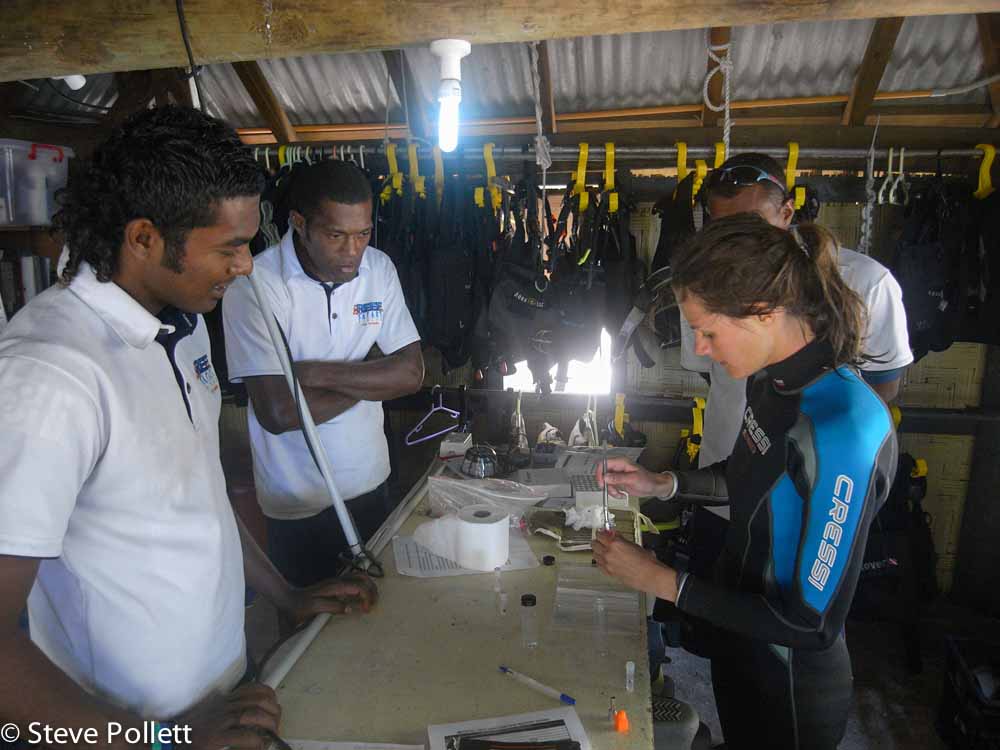 With nothing to sample it is easier to appreciate the lush Fijian landscape and culture. I sit and listen to the idle murmurings of Fijian dialects whilst surrounded by Fiji white-eyes, a songbird that like the languages of the South Pacific, has diversified across the archipelago. I am overwhelmed by local culture and tradition where pride and passion facilitate its transfer leaving a deep sense of welcoming and acceptance into an unfamiliar way of life.

Mythology and creation stories of the South Pacific are abound with local creatures; Dakawanqa is the shark god protecting fishermen and their communities from the perils of the ocean and he is thought by some, to be the direct ancestor of the Fijian people’s high chiefs. Thanks to the historical connection to the natural world and to Fiji’s dual system of government, nature is regularly accounted for in management decisions in this part of the world. In Fiji, power is not only vested in the president and parliament of a post-colonial system but in the high chiefs of the indigenous communities within the villages. It is within these villages that a strong sense of resource ownership exists and where cultural beliefs are woven into decision making. For example, villagers will cordon off parts of their fishing grounds for periods of time forming tabus to honour the death of a chief, and in return for protection and assistance, many Fijians would never dream of harming a shark instead holding them on a pedestal out of respect for their power and significance. This form of traditional grassroots governance sees widespread compliance due to the respect villagers have for their chief’s authority. As a result, Fiji’s community based marine resource management has been recognised as one of the most successful in the world. 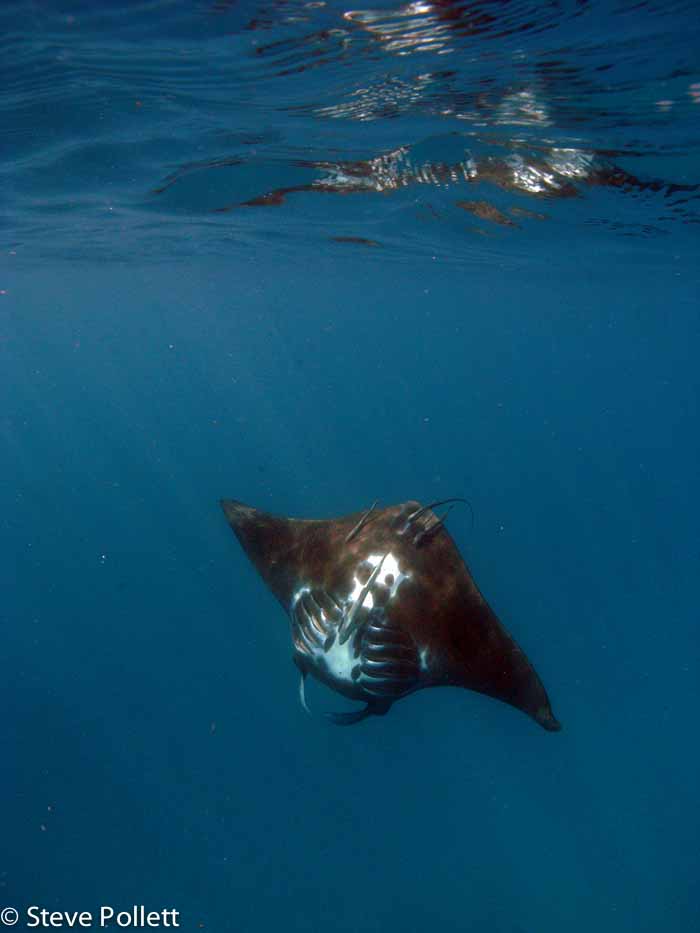 A black-morph manta barrel rolls in the channel

The impact Fiji is having on marine conservation extends beyond its own waters. This year, the Fiji government and WWF Pacific spearheaded proposals for reef mantas and all nine species of mobula to be listed on CMS (the Convention on the Conservation of Migratory Species of Wild Animals). If successful, this environmental treaty will provide a global platform facilitating the development of strategies between member states for the conservation of these elusive animals. Proposals are currently being read, re-read, criticised and evaluated in the hustle and bustle of Ecuador’s smog ridden capital Quito and we are likely to hear the outcome early next week.

The stealth black mantas return to the channel but this time I am troubled by their tough sandpaper-like skin making efforts to sample frustrating and disheartening. We keep persisting until the sun sets to silhouette lush Fijian islands and a lonely boat heading home on the horizon. I walk along an empty beach, my feet illuminated by a glowing trail of bioluminescence and my tent by a blanket of a billion stars. A chaotic race is bubbling up across the world to protect mantas and mobulas before it’s too late but tonight I feel optimistic. After all, I’ve heard time travels slower here. 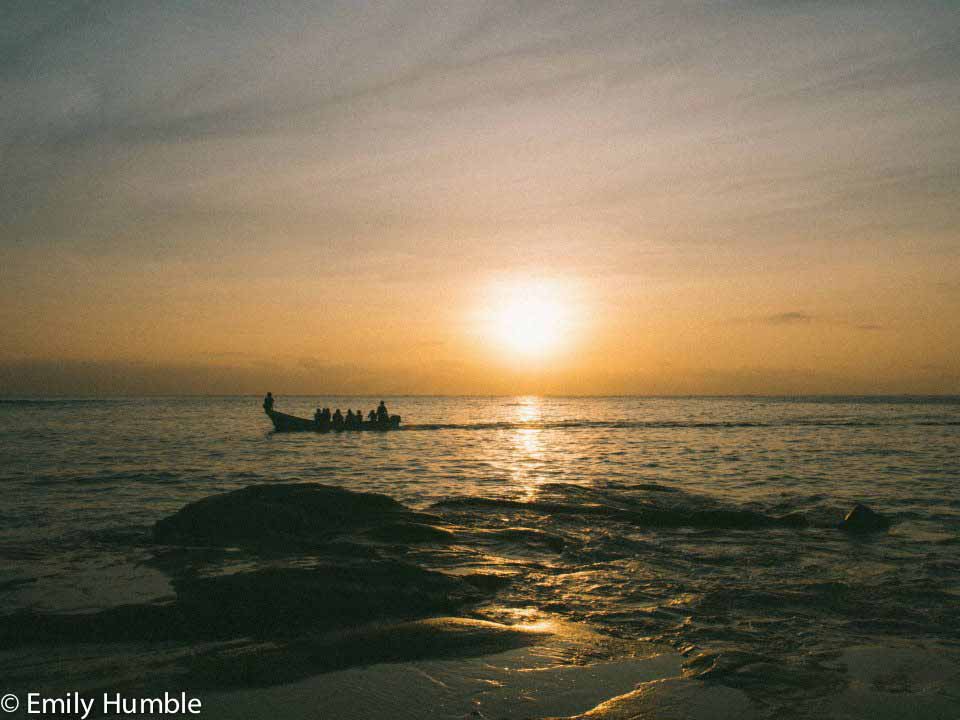