If ever I am asked where in West Africa I studied sawfish, I reply “Senegal and The Gambia”. I am usually rewarded with a blank look, at which I hold up my left hand and form the letter “C” with my thumb and forefinger. “See here”, I say twisting my wrist ever so slightly to show my audience. “This is the bulge of West Africa and my index finger knuckle is the western-most part of the continent. And that is where the capital of Senegal is – Dakar. It’s up towards the north of the country.” With a little more contortion, I lay the index finger of my right hand into the bulge, from the west. “And my finger is The Gambia, so-called because it surrounds the River Gambia. It effectively divides eastern Senegal in two, and to get from northern Senegal to southern Senegal you have to cross this river.”

Everything about the River Gambia is lazy. It never flows terribly fast, and it is so lazy that outside the rainy season it even flows backwards as the tide turns in the sea hundreds of kilometres away. At Niani Maru, a tiny abandoned village I rediscovered in 1974, the water was salty at the end of the dry season, 240 km from the river mouth.

Map of Senegambia. Image © Save Our Seas Foundation

But there is more to this river than being the namesake of the country it flows through. The River Gambia has its source in Guinea Conakry, from where it meanders through western Senegal and thence through The Gambia and into the Atlantic. When confronted by it the first time, I crossed the Gambia River in a Land Rover near the Guinea Conakry border at a ford at Mako. I was trying to find out how high up the river sawfish were encountered. A villager at Tonboronkoto described to me the unborn sawfish from a female with having saws “like plastic”. If sawfish did indeed swim that far up in times gone by then they would have had to cross the Mako ford to get there, and that could only have happened in the rainy season which, I later discovered, was exactly when the giant fish would swim up from the sea to deliver their young in the river.

Map of the Gambia River

Under the sponsorship of SOSF I returned to the region in 2017 to find out whether sawfish still existed there, not only in The Gambia, but also in the Casamance River in southern Senegal. Arriving at Dakar I travelled down to the south of Senegal with my son Dominic. We decided to use the main river crossing at Balingo (see figure, 3 Map of the Gambia River). This was served by a ferry back in 1974 and it was still served by a ferry 43 years later. Back then I used to dread the crossing as there was no sure way of knowing how long you had to stay in the queue. The wait seemed endless…shuffling through the dirt in the stifling heat, swatting the flies, unsuccessfully persuading someone to squeeze my little Renault 4 onto the already overladen ferry while I gradually lost my rag. Actually, my fortunes changed when I helped save the life of a man who worked on the ferry, a certain Leity…but that will have to wait for another story.

Balingo must go down in history, because it was from Devil’s Point, close to Balingo that was caught the biggest sawfish I ever encountered in West Africa. I only saw the rostrum. It was of a largetooth sawfish and measured about 130cm, which would approximate to a fish over 6m in length. 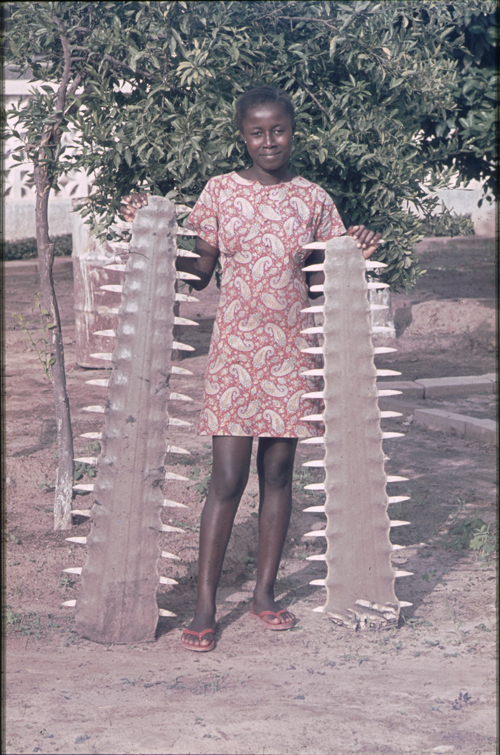 And it astonished me that still, after over four decades no one had bothered to build a bridge. This was, after all, the Senegambian highway, with a heavy load of truck traffic transporting goods north and south.

On crossing into The Gambia, Dominic and I were told that the Balingho ferry had broken down. The alternative was to drive east and make our way upriver to Georgetown, an old colonial settlement that sits opposite McCarthy Island. Here the river is narrow, and the crossing relatively easy. 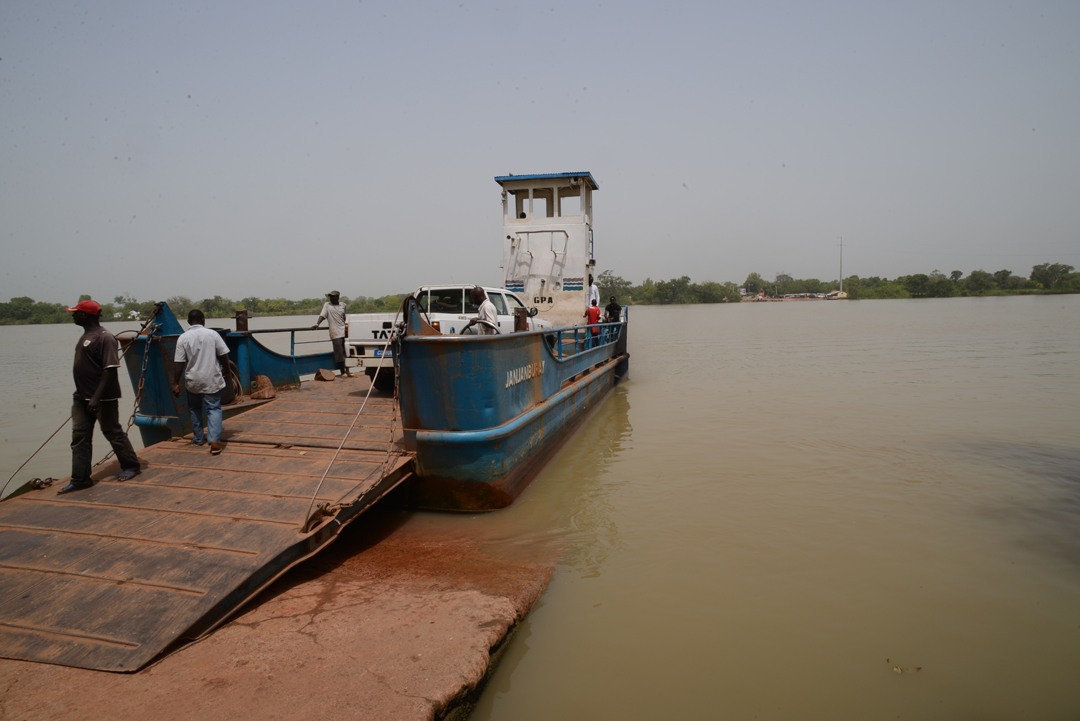 At Georgetown, there used to be two ferries, one to get on McCarthy Island, and the other to get off it, but we discovered that the southern channel is now crossed by a bridge. I wondered what had happened to the ferry it had replaced. The only one left looked pretty dated and the crowd trying to get on it as colourful as ever. From there a long dirt road took us south into our final destination, the Casamance. 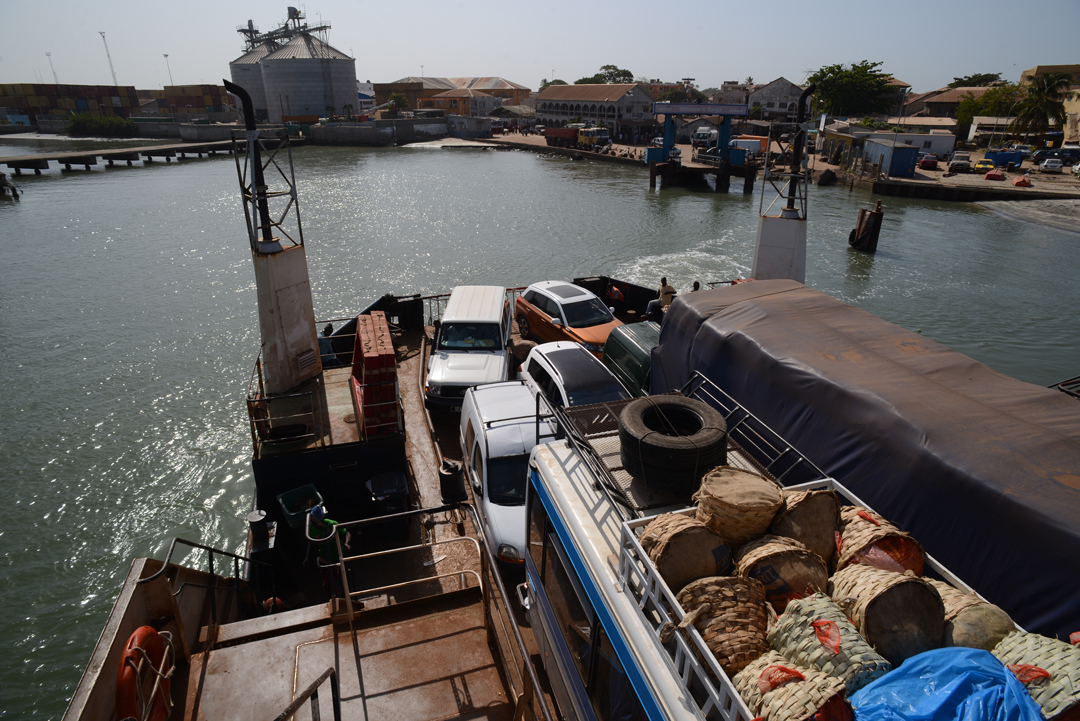 The Georgetown route meant a massive detour, so on our way back north to Dakar, we attempted the final main crossing-point of the River Gambia, at its mouth, from Banjul on the south bank to Barra on the north. I have to admit that here people were in a hurry. The scrum to get the ticket through a tiny grill that was designed to allow just one hand through it, the press of eager humanity behind, the struggle to escape the crowd once that precious ticket was acquired, and the relentless heat… It took over two hours to get through that, and at last, we were crossing the water. I was shocked to see a string of boats and nets that formed an almost continuous line across the river mouth. How any sawfish could survive that gauntlet to swim to their birthing sanctuary and make it safely back out to sea seemed impossible. 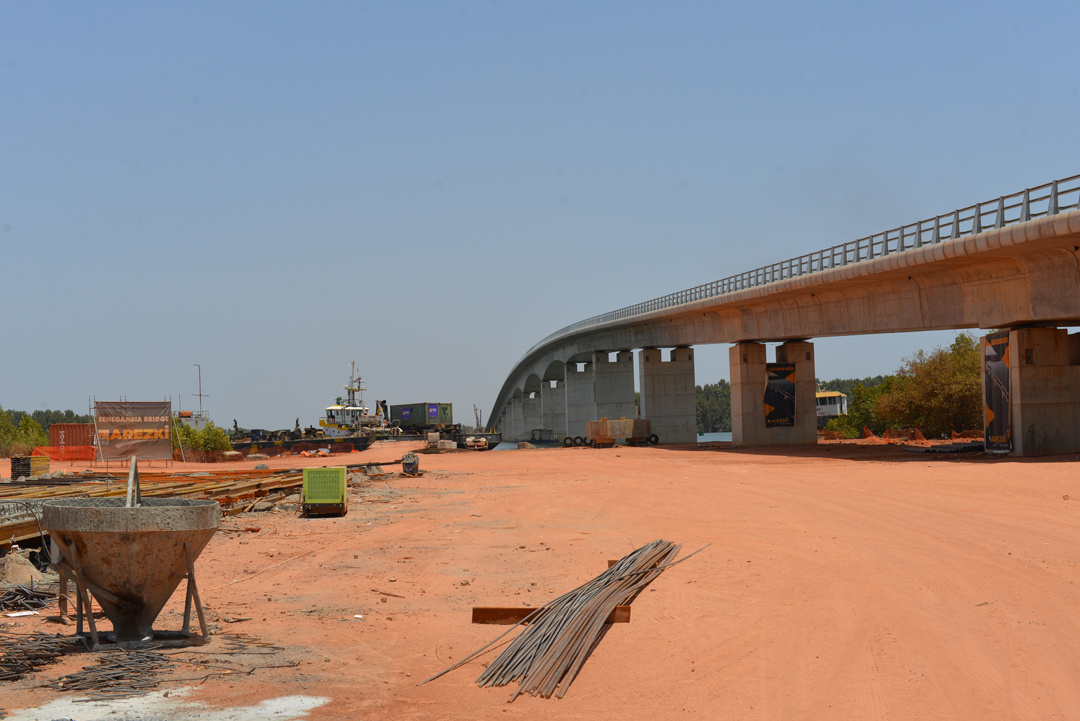 Dominic and I returned to the region in 2018 and again in 2019, when I was astounded to receive a picture from a fisherman in The Gambia. It showed the Balingho ferry, and in the background the most magnificent high-arched bridge crossing the River Gambia. Where had that come from?  It turns out it was a gift from the Chinese, every hungry for global influence and Africa’s mineral wealth. We just had to try it! I felt sorry for the ferry operator, being done out of business that suddenly.  So, heading back north at the end of the 2019 expedition we approached the bridge, and the longest line of trucks I have ever seen. I counted them, reached the number 60 and gave up counting further. My heart sank, as I thought of the massive detour we would have to do via Georgetown to avoid the blockage. However, no one bothered us as we passed the trucks. We bought our ticket for the bridge, crossed it in splendid isolation, even paused at the top to take a picture of the ferry plying away its trade beneath us, working through that long line of trucks who were quite happy to wait their turn be it for hours or days, no doubt for a cheaper crossing… I was left to wonder at the view of this magnificent river that was the refuge for giant sawfish that swam up it just a few decades ago. 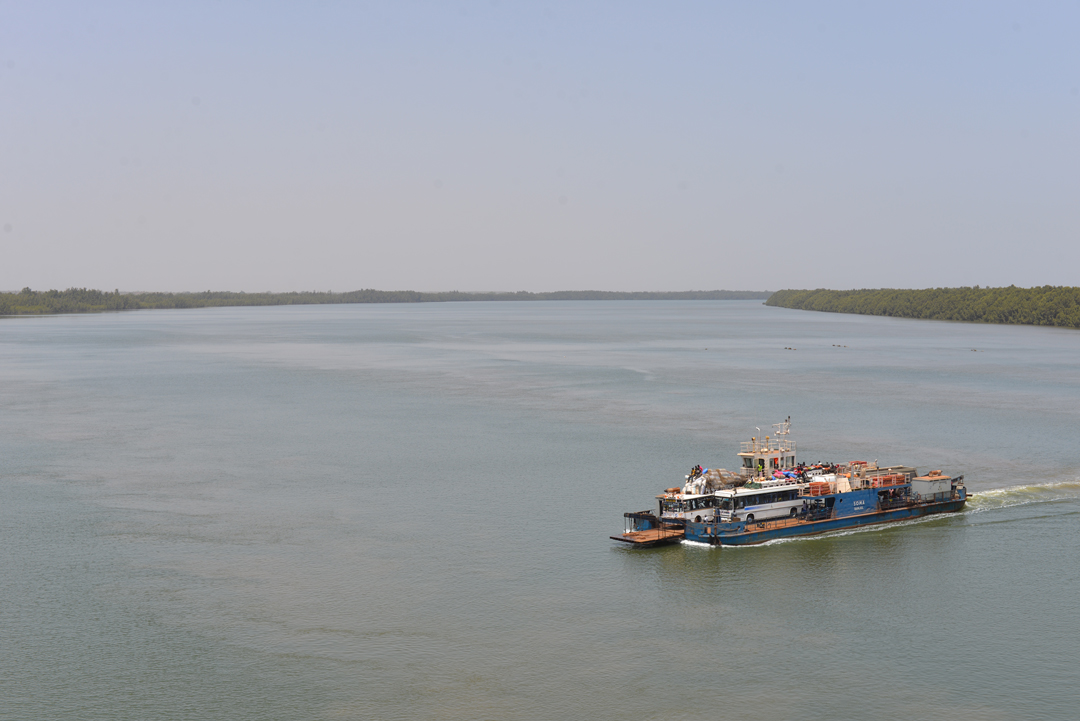 So, what about that Georgetown ferry that was replaced by the bridge at McCarthy island? Curiously, Dominic and I bumped into it one day. We were exploring an area downstream of Niani Maru, and miles west of Georgetown, in the hope of finding more fishing communities on the Gambia River. The map was not that clear and the trail ended at a fast-flowing channel, barely 50m wide that separated us from an island. There we came upon an ancient ferry, clearly no longer used even for the short crossing it faced. I read the plaque. It was the old Georgetown ferry! The villagers told us that they had cattle on the island and requested help to cross the channel to water them each day. The McCarthy Island ferry became available, and someone had the bright idea of sending it down. How long that lasted, I don’t know. The ferry lies idle and the cattle are now delivered their daily water by canoe. 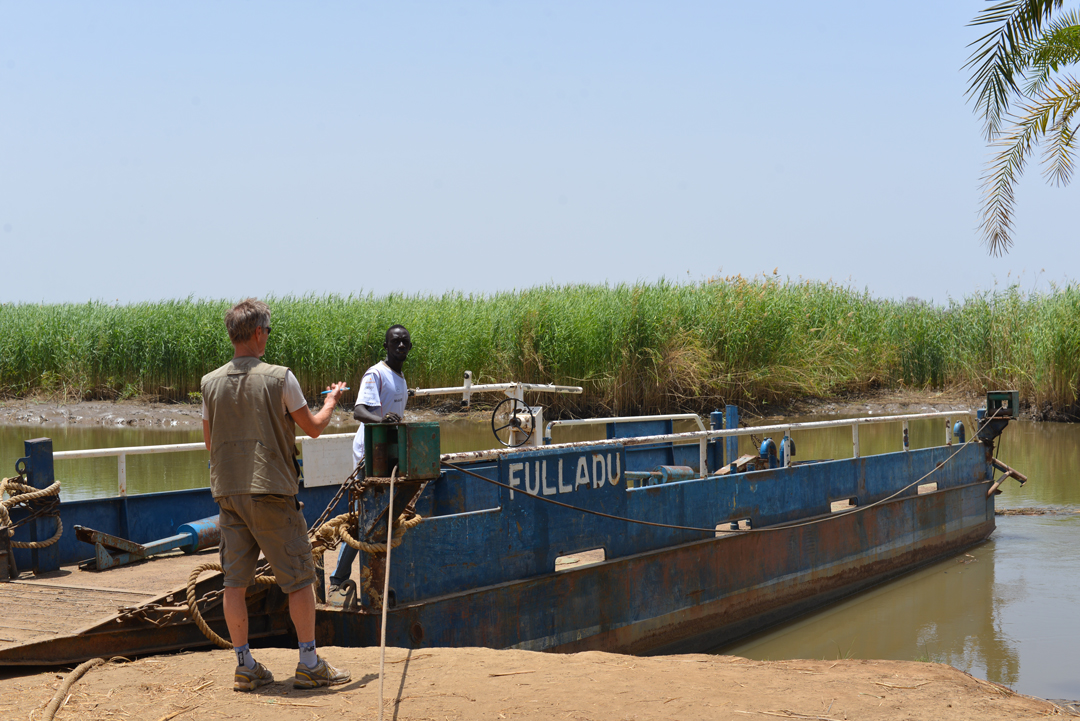