What is the most dangerous animal in the World? Any guesses? 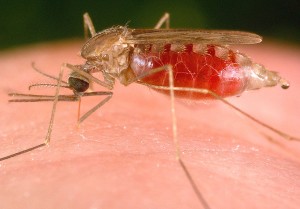 But what does the Anopheles mosquito have to do with bull sharks? Well, a few weeks back we gave a talk on the public perception of bull sharks as part of the Save Our Seas Shark Centre (SOSSC) “People and Sharks” lecture series. The talk was designed to illustrate how media and perception distort reality when it comes to all things shark-related.

Bull sharks are probably one of the most feared sharks on the planet and are often cited as being the most dangerous shark species in our oceans. Yet it is the mosquito that is responsible for millions of deaths every year – not bull sharks – due primarily to the transmission of Malaria in sub-Saharran Africa. However, mosquitos remain little more than a painfully irritating buzz in the ears of humanity – a highly underrated harbinger of death, if you will – while bull sharks continue to inspire fear and terror in millions of beach goers and landlubbers around the world.

To illustrate this – and see how bull sharks are generally viewed by society – I did a quick search on Google (type in “bull shark” and you will see what I mean). Although there was some good reading material found during the search – scientifically reliable, etc – there were also some really terrifying descriptions of bull sharks. These included the following:
…one of only 3 sharks known to attack humans. Hold your breath and get to know the pit bull of the seas (YouTube)
…the most common attacker of people (Enchanted Learning)
…one of the deadliest of sharks in existence (HowStuffWorks)
…known man-eaters (YouTube)
… a vicious bull shark tried to tear off his foot (MSNBC online)

A few other popular misconceptions I came across included:
– bull sharks are solitary & territorial
– bull sharks have the highest levels of testosterone of any animal known to science (a VERY popular statement even among scientists, but one based completely in fiction)
– bull sharks are the only freshwater occurring shark species
…and my personal favourite…
– bull sharks are calculating, cold-blooded killers (call me crazy but I personally find it hard to believe these animals would premeditate attacks on humans)

And this is where our bull shark (Zambezi shark) research project comes in. Through continued public outreach including talks, invitations to the public to join us on research expeditions and publications in popular media, we are trying to dispel the BULL SHARK MYTH. Using the science gained through three years of study on some of the biggest bull sharks in the world – in one of the most unique habitats (where there has never in collective memory been a negative human-bull shark interaction) – we are hoping to inspire stewardship of, and respect for this awesome coastal predator.

To learn more about this project, and find out how you can be involved, contact info@sharkconservancy.org.

Visit Clare’s blog to read more about the talk at the SOSSC.