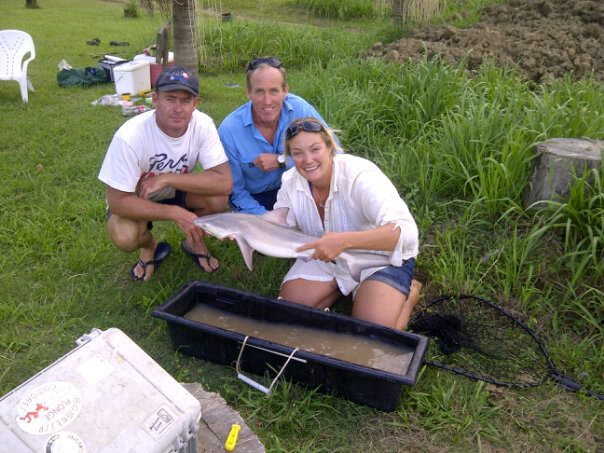 The Umzimvubu River – a shallow and turbid river – flows into the Indian Ocean near the small town of Port St. John’s on South Africa’s east coast. Surrounded by lush vegetation, vervet monkeys and traditional African communities the ‘Vubu, as it is affectionately known, is also home to neonate (newborn) Zambezi (bull) sharks. The coastal area near the ‘Vubu has recently gained infamy as South Africa’s “shark attack capital” due to several fatal interactions that have occurred in the past few years. The shark species responsible for these “attacks” were none other than the much-maligned Zambezi shark. So what is happening in this region where Zambezi sharks big and small occur and where humans play in the sub-tropical surf?

These are just some of the questions a group of South African scientists are attempting to answer. A collaborative study including scientists from the South African Shark Conservancy (SASC), South African Institute for Aquatic Biodiversity (SAIAB) and the Natal Sharks Board (NSB) are working to examine the role and behavioural ecology of neonate, juvenile and adult Zambezi sharks in both the Umzimvubu River and coastal surrounds. The overarching aim of the estuarine component of the study is to better understand the role of estuarine ecosystems in conserving Zambezi shark populations, whilst the coastal study aims to mitigate negative human-shark interactions. Additionally, we hope to determine when female Zambezi sharks pup, how long pups remain in the system before departing for the ocean and how neonate and juvenile Zambezi sharks utilize river systems in South Africa.

The Save Our Seas Foundation kindly donated funds to SASC, helping us launch our first expedition to the ‘Vubu. In combination with our Breede River Zambezi shark research, SASC aims to develop and implement a National Zambezi shark research strategy to improve conservation and management of the species locally and regionally.