In our previous blog post, we described how we implemented our shark and ray surveys by drone over the lagoon of Moorea, French Polynesia, so that we could develop and test a non-invasive method of examining elasmobranchs in the shallow and crystal-clear waters of coral reefs. It is now time to present to you some of the marine organisms we spied on.

Our survey was designed to document the abundance and distribution of elasmobranchs in a section of the lagoon of Moorea. It came as no surprise, then, that we spotted some common inhabitants of Moorea’s reef: blacktip reef sharks Carcharhinus melanopterus. 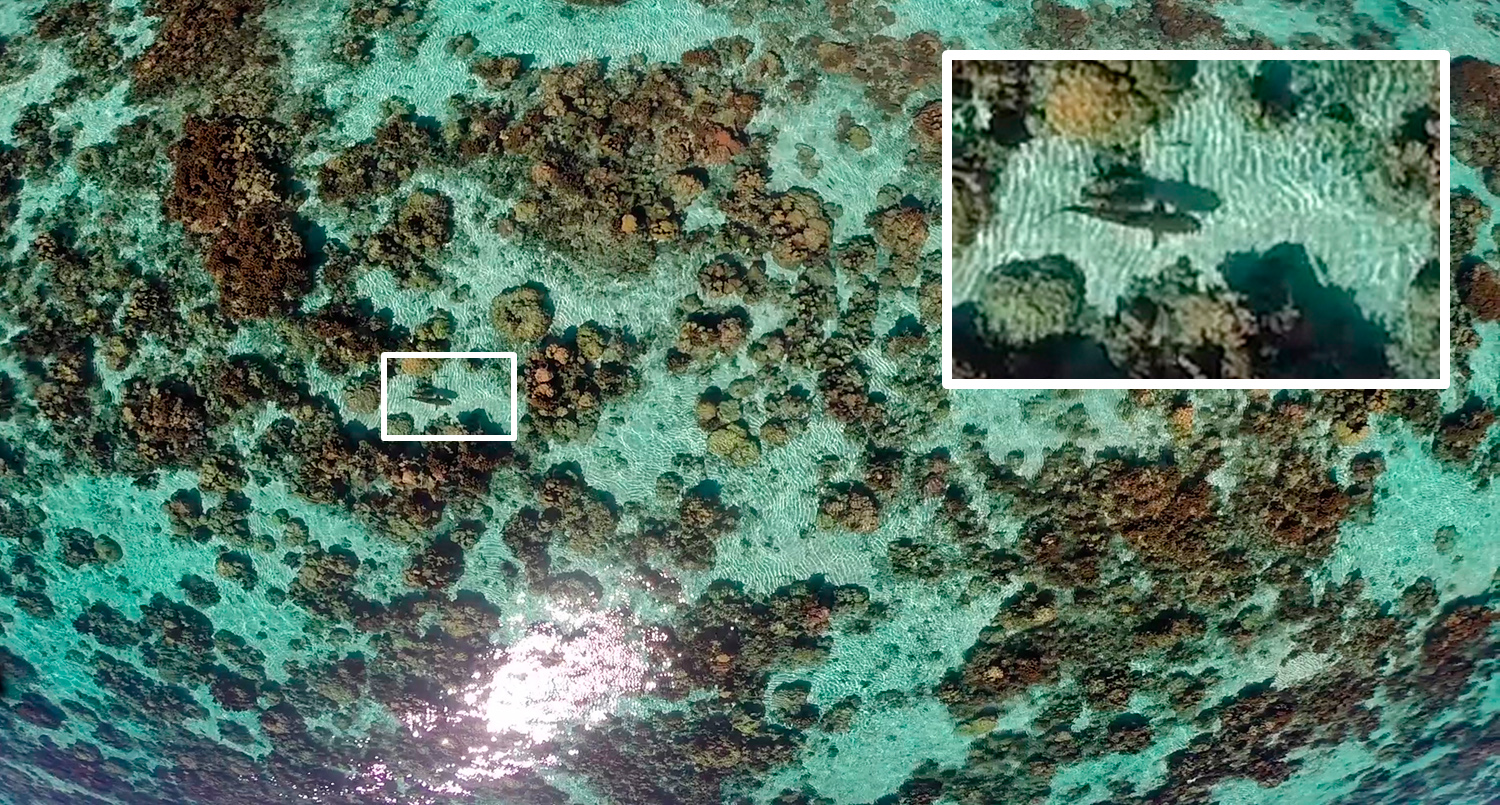 A blacktip reef shark cruising among patches of coral in the lagoon. © Photo by Johann Mourier

The lagoon also hosts the pink whipray Himantura fai, which settles over its shallow sandbanks to rest and warm up during the day. 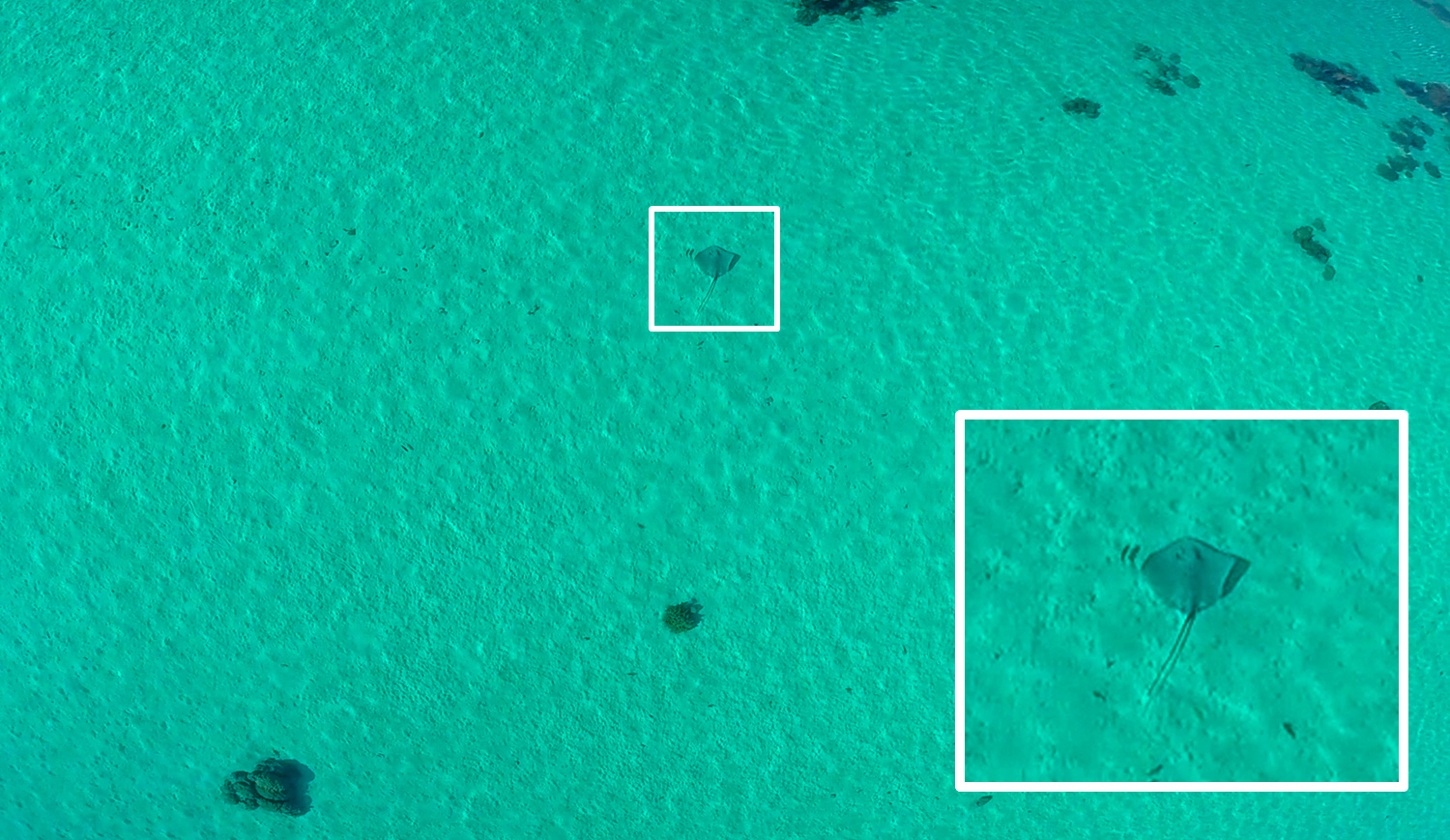 A stingray swimming over a sandbank. © Photo by Johann Mourier

Other little animals that we didn’t target also showed up! When passing over the channel in the middle of the lagoon, our drone often encountered white-spotted eagle rays Aetobatus ocellatus, a species that groups together and likes to use these channels as corridors in their daily movements. 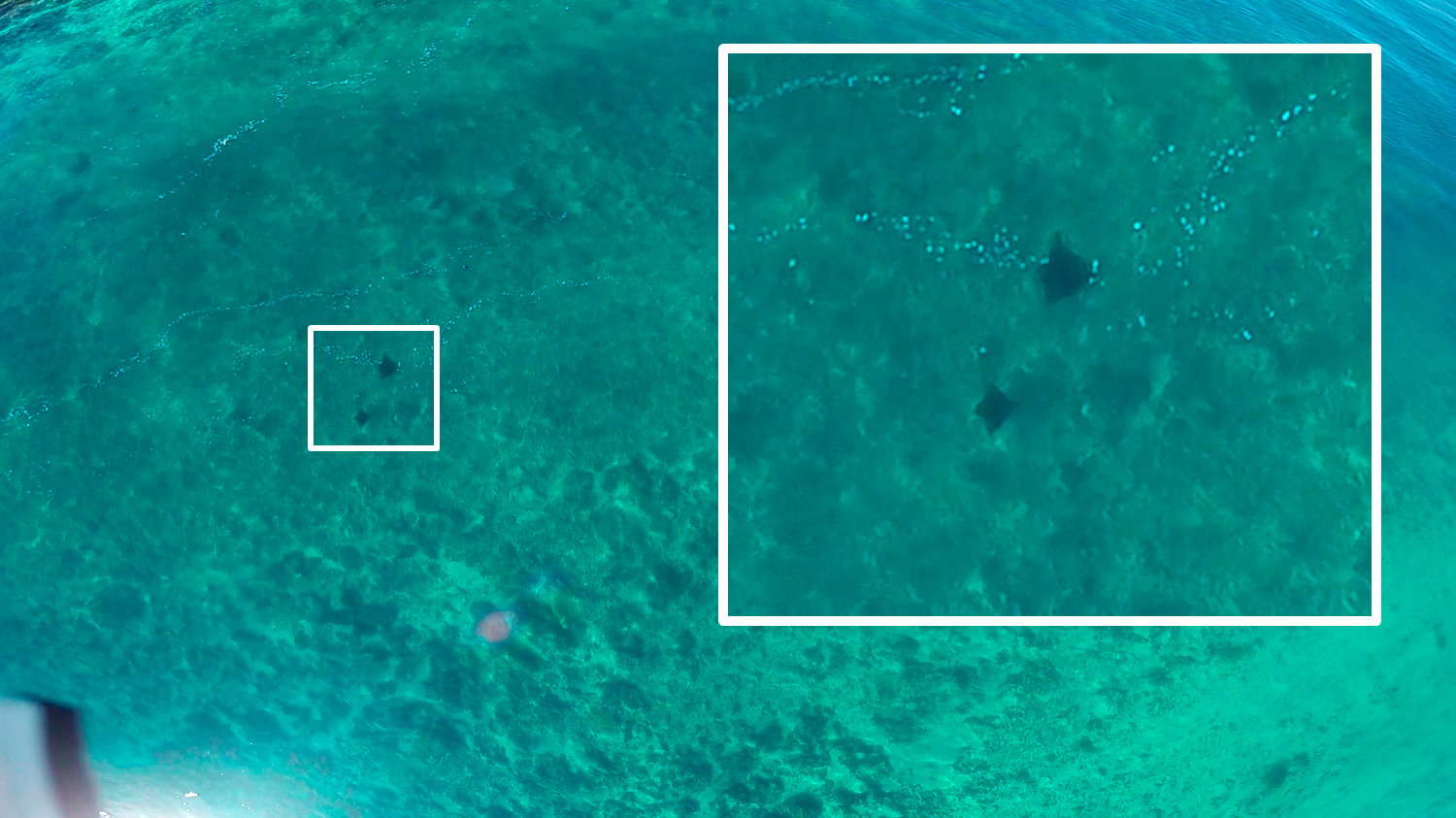 A pair of eagle rays flies together in the current of the channel. © Photo by Johann Mourier

Finally, we were surprised that the drone spotted several turtles. Sea turtles are often observed on the outer reef, both underwater and breathing on the surface, but our drone survey showed that they also use the shallow reefs of the lagoon. 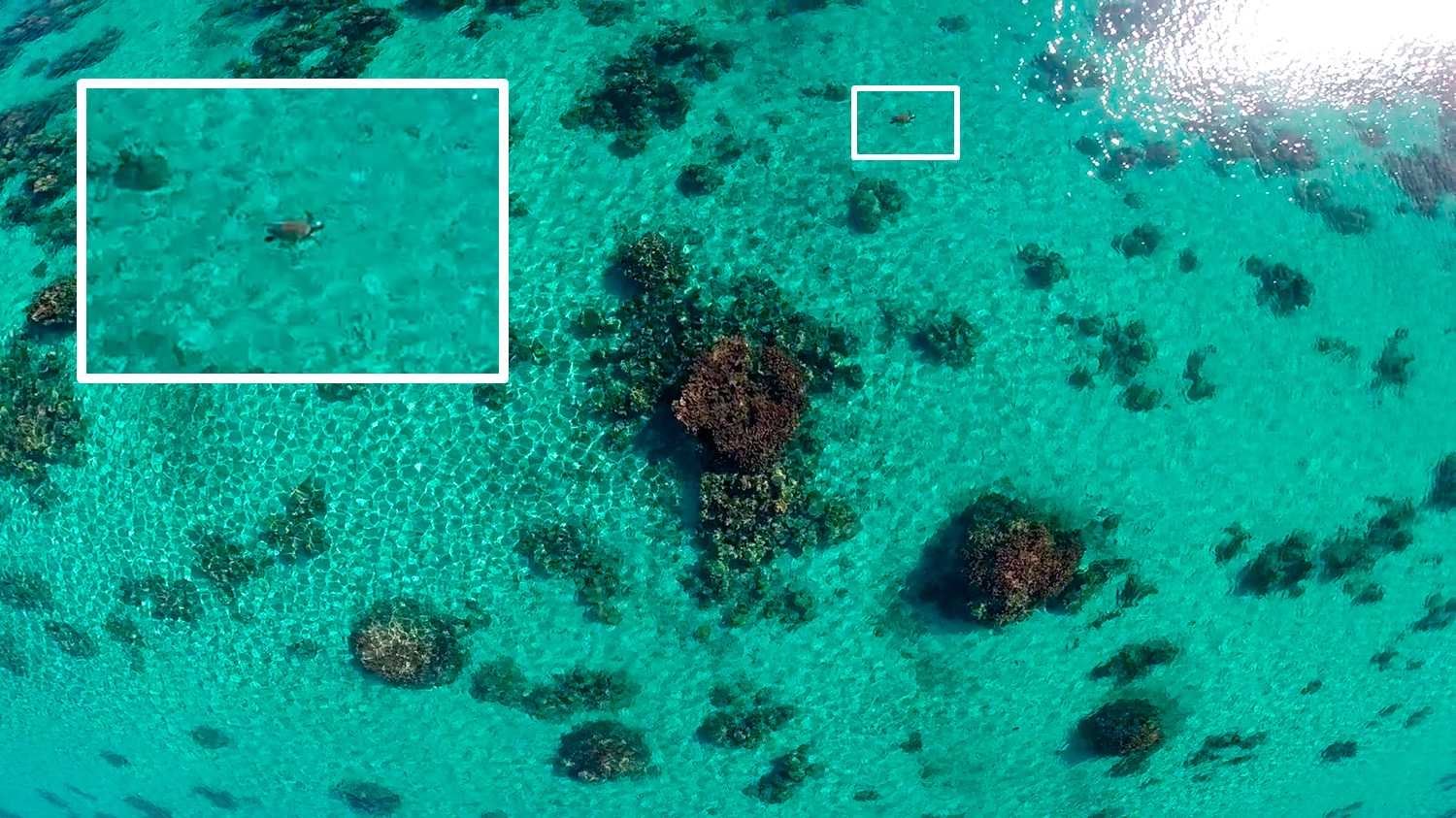 A turtle breathing at the surface in the shallow waters of the lagoon. © Photo by Johann Mourier

The survey also examined human use of the lagoon, especially provisioning activities that aim to attract sharks and rays for ecotourism. It was useful for investigating how these activities affect the distribution and density of these animals. 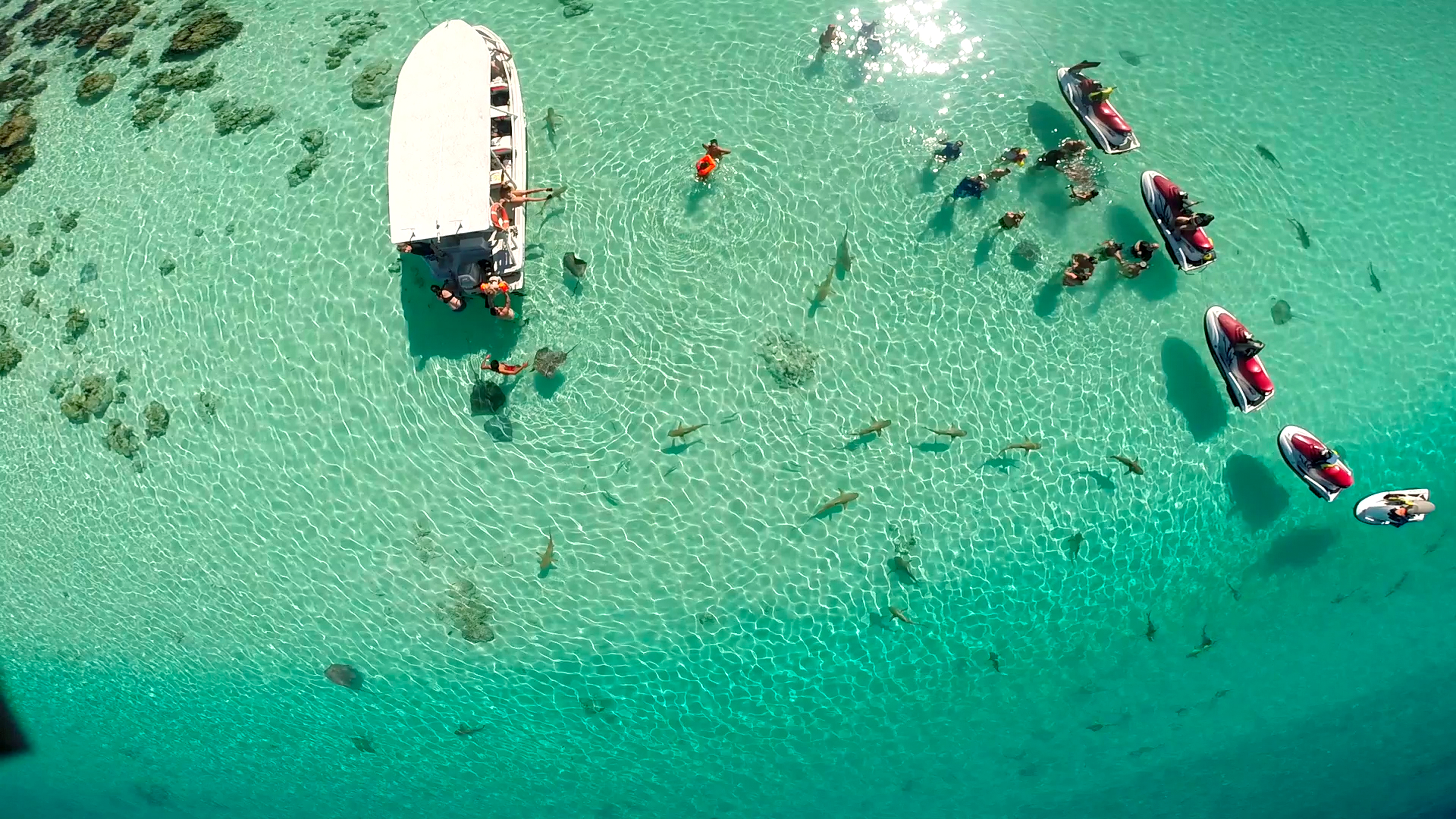 Sharks and rays are a tourist attraction in Moorea’s lagoon. © Photo by Johann Mourier

This Save Our Seas Foundation project not only enabled us to test and validate a non-invasive technique to survey megafauna in tropical lagoons, but also provided us with interesting data on the distribution and habitat use of some marine species in the lagoon of Moorea and the human influence on their distribution.