In June and July 2014 we conducted a field trip in Moorea, a small island in the South Pacific that lies 20 km off Tahiti in French Polynesia. Our aim was to develop a new method of surveying elasmobranchs in the shallow and crystal-clear waters of coral reefs. As well as assessing the abundance of sharks and rays, we wanted to find out where they occur and when. 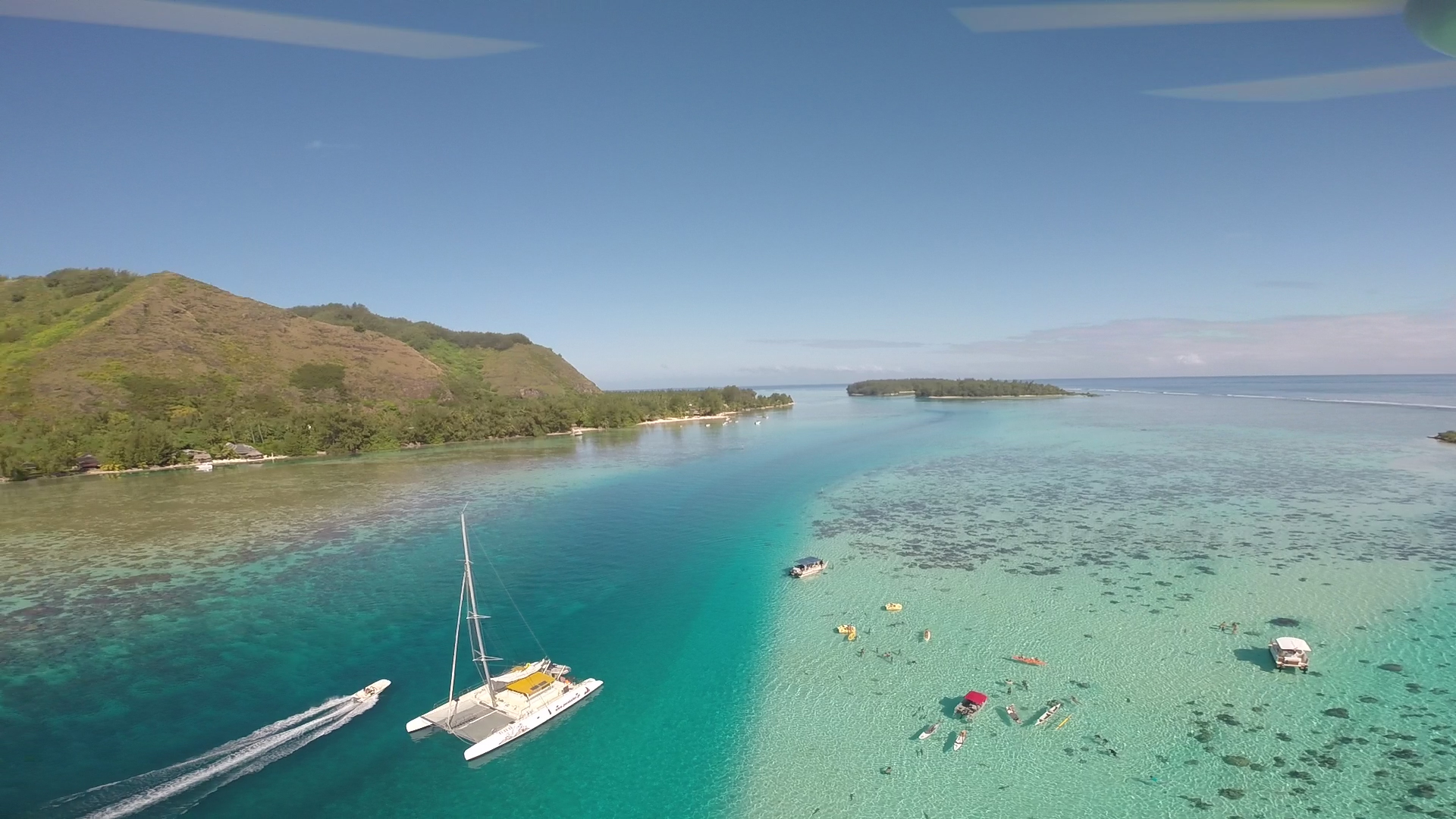 An aerial view of Moorea’s lagoon taken by the drone.

So far, assessing the relative abundance of elasmobranchs has relied on data from fisheries (CPUE, or Catch Per Unit Effort), but they come at a cost: the approach is fairly invasive and can lead to mortality in the subject species if it is particularly vulnerable to stress. Moreover, this method may not be suitable in some inaccessible and fragile shallow-water environments.
Our idea was to use a micro Unmanned Aerial Vehicle (UAV) – commonly known as a drone – to get a better picture of the spatial patterns and density of sharks and rays in the waters of Moorea’s lagoon. We designed perpendicular transects to sample fringing, channel and barrier reef habitats. 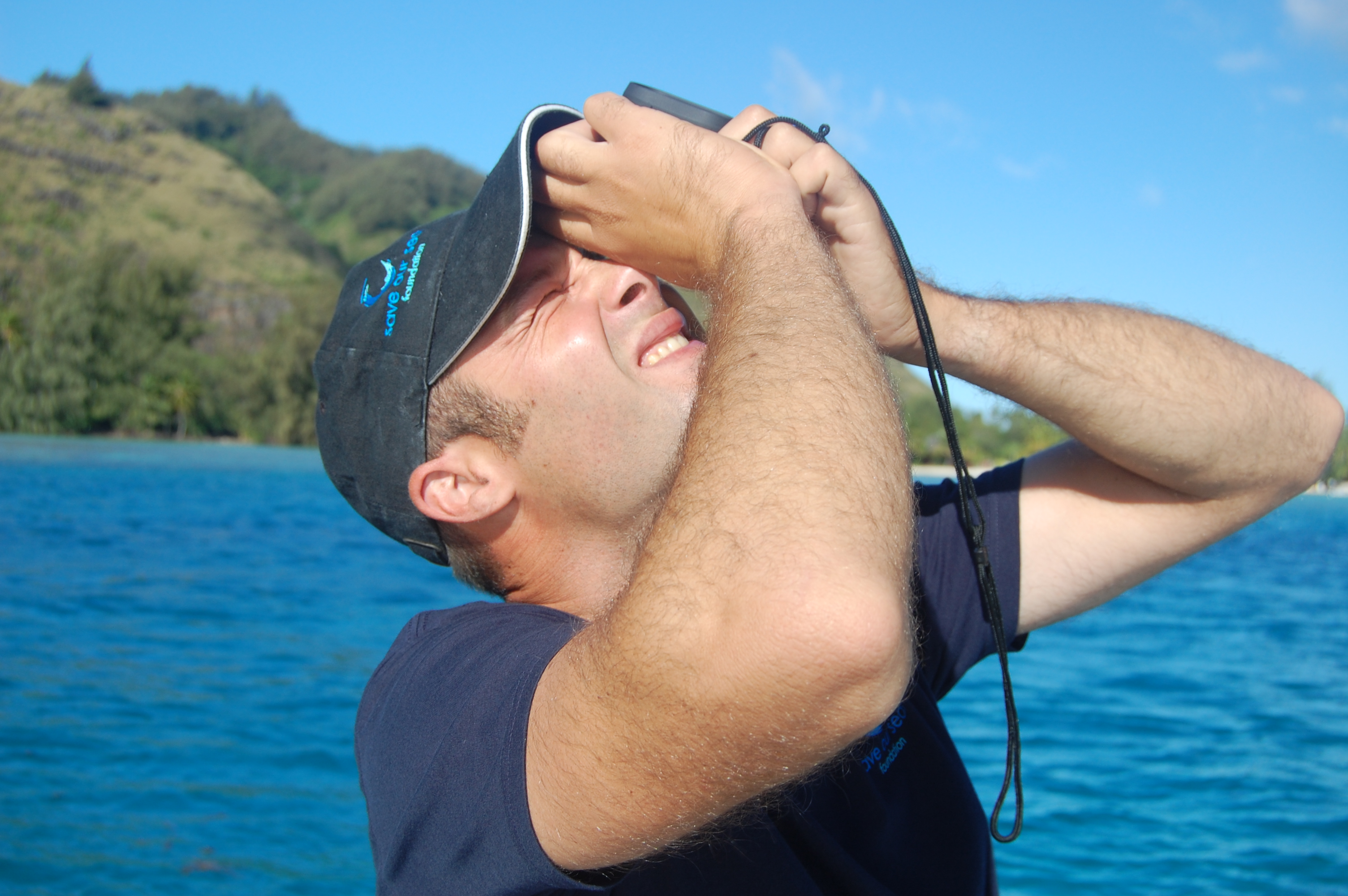 Measuring the altitude of the drone with an altimeter before starting a transect survey over the lagoon.

We first placed our skiff in the middle of the lagoon and deployed the drone above it. Using an altimeter, we tested different altitudes to find the best one for our experiment. We were looking for a compromise between high enough to cover the largest possible survey area and low enough that we could identify the large species in the lagoon, especially sharks and rays, but also sea turtles. In our case study, we found that the best altitude was 12 metres. 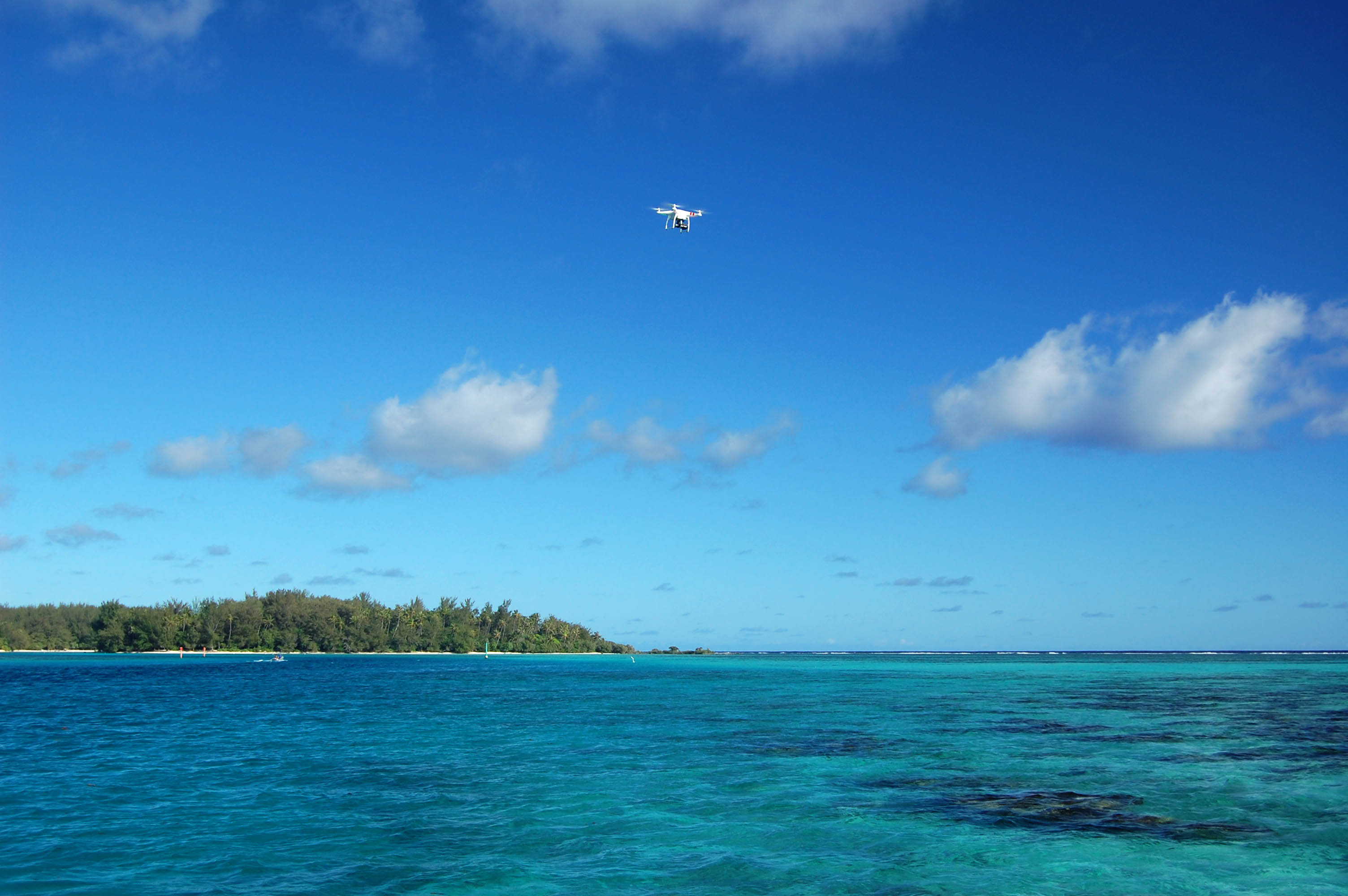 The drone flying over the shallow waters of the lagoon of Moorea.

With its altitude set, the drone flew from the fringing reef to the barrier reef at a slow speed, recording all the species passing below it. 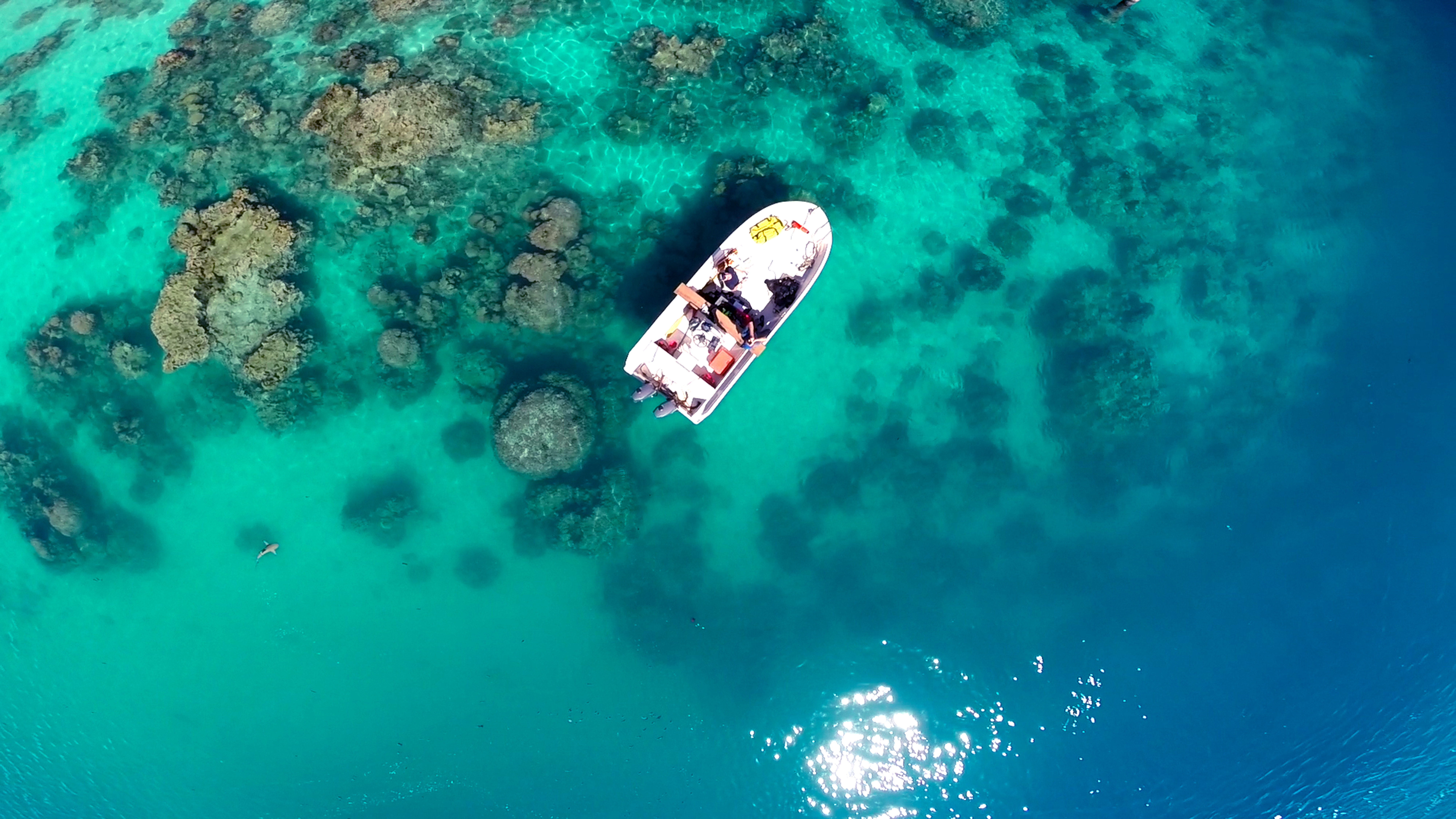 Flying over our boat, the drone recorded the presence of a blacktip reef shark (bottom left).

The main limit to using the drone was the wind strength, which sometimes affected its ability to fly or whipped up small waves on the surface that hindered our ability to identify species accurately. To remove reflection from the water surface we used a polarised lens.
Over the course of 63 transects in 11 days, we sighted four species, including blacktip reef shark Carcharhinus melanopterus, pink whipray Himantura fai and white-spotted eagle ray
Aetobatus ocellatus, as well as sea turtles. 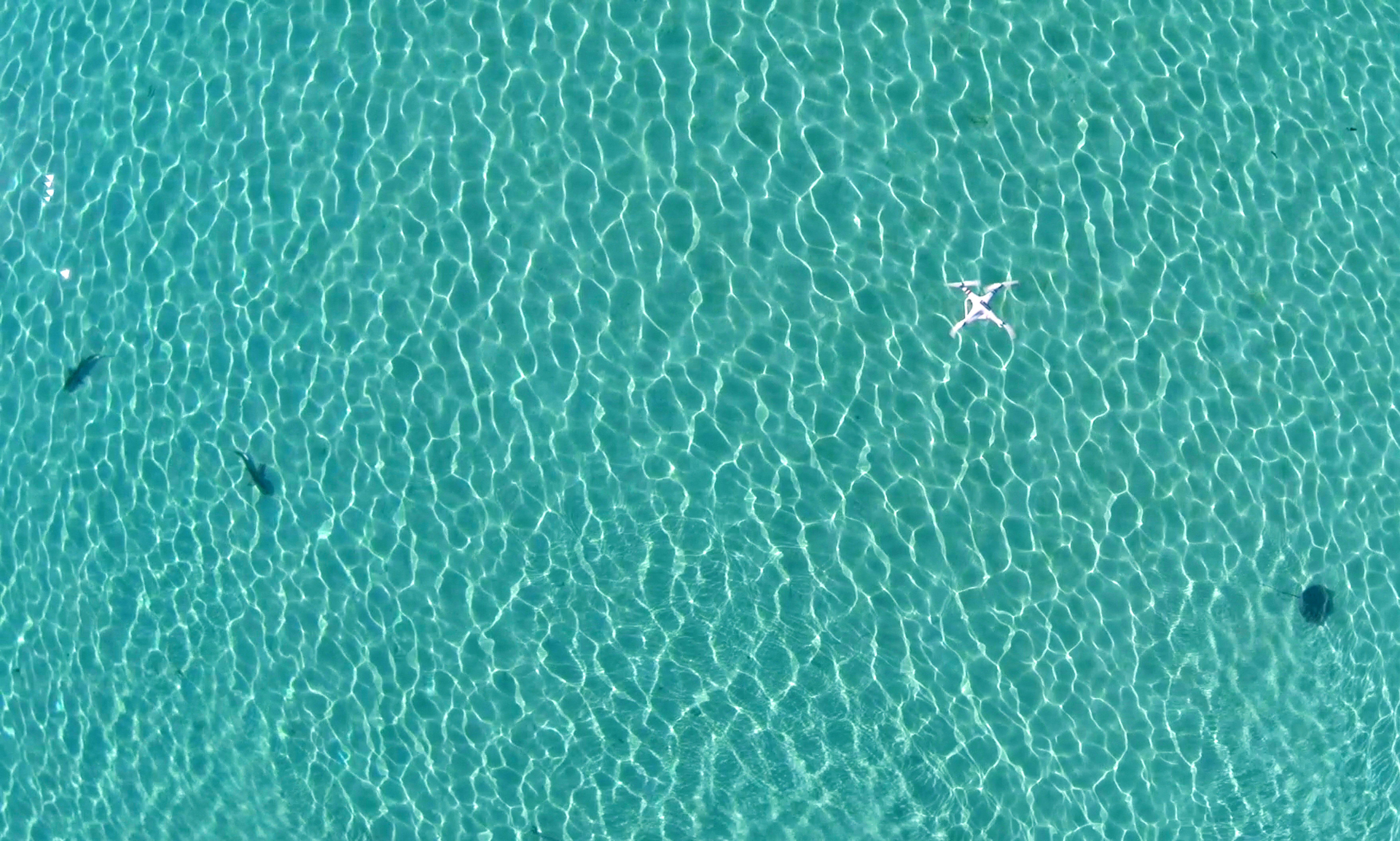 The drone flying over two blacktip reef sharks and a stingray.