A ray with a caveman’s weapon

Although it was eight years ago, I still remember my first encounter with a sawfish as one of the most extraordinary experiences of my life. And, in light of our recent paper ‘Occurrence and habitat use of the Critically Endangered small tooth sawfish, Pristis pectinata in the Bahamas’ being accepted by the Journal of Fish Biology, I feel it’s appropriate to recollect that moment now. 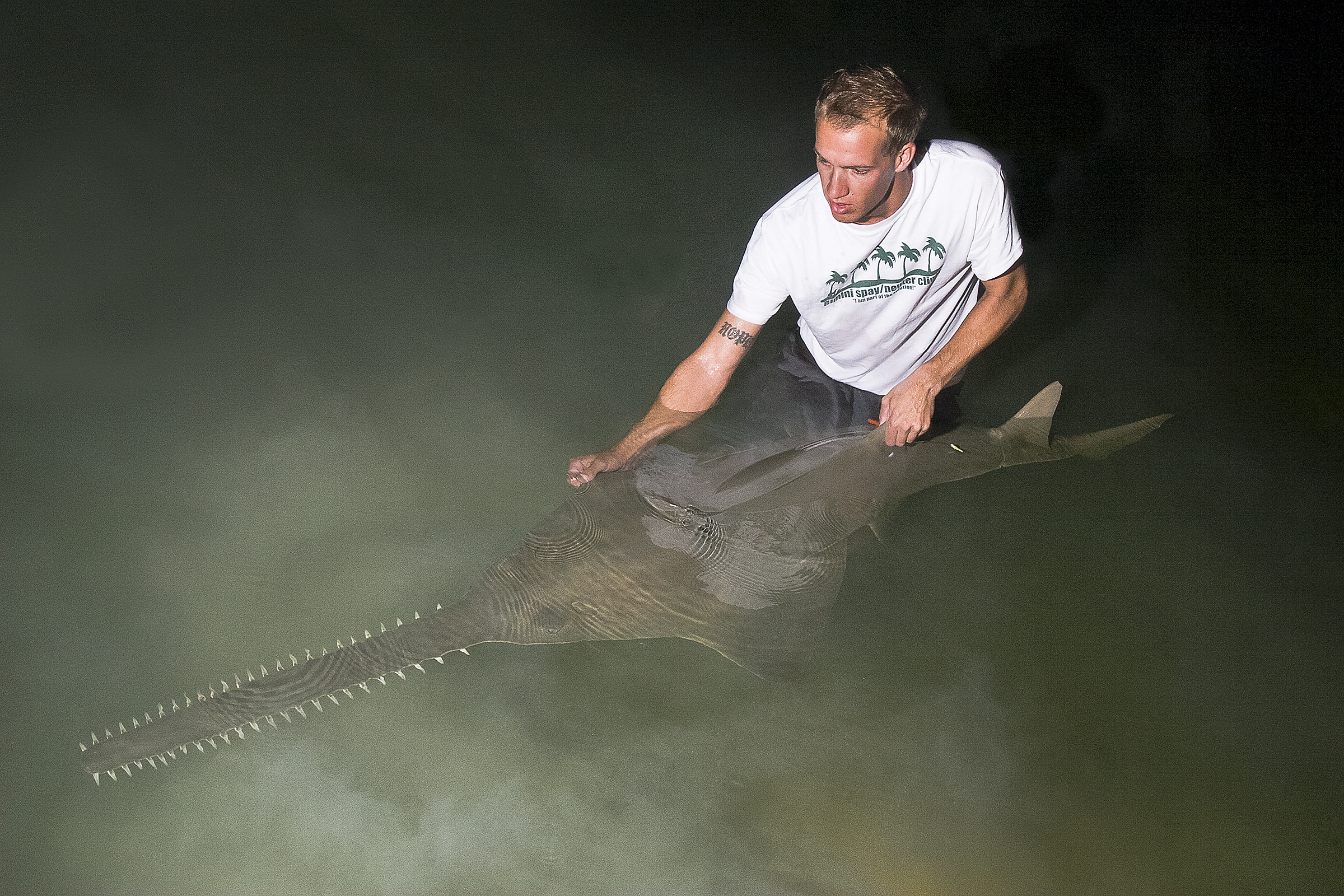 Every summer in the months of May and June researchers at the Bimini Shark Lab set gill nets in North Bimini’s mangrove-fringed nursery areas to capture newborn and juvenile lemon sharks. The nets are anchored at the edge of the mangroves and pulled offshore, then set for 12 hours overnight and for six consecutive nights. The target species is the lemon shark, but every now and again something special makes an appearance. 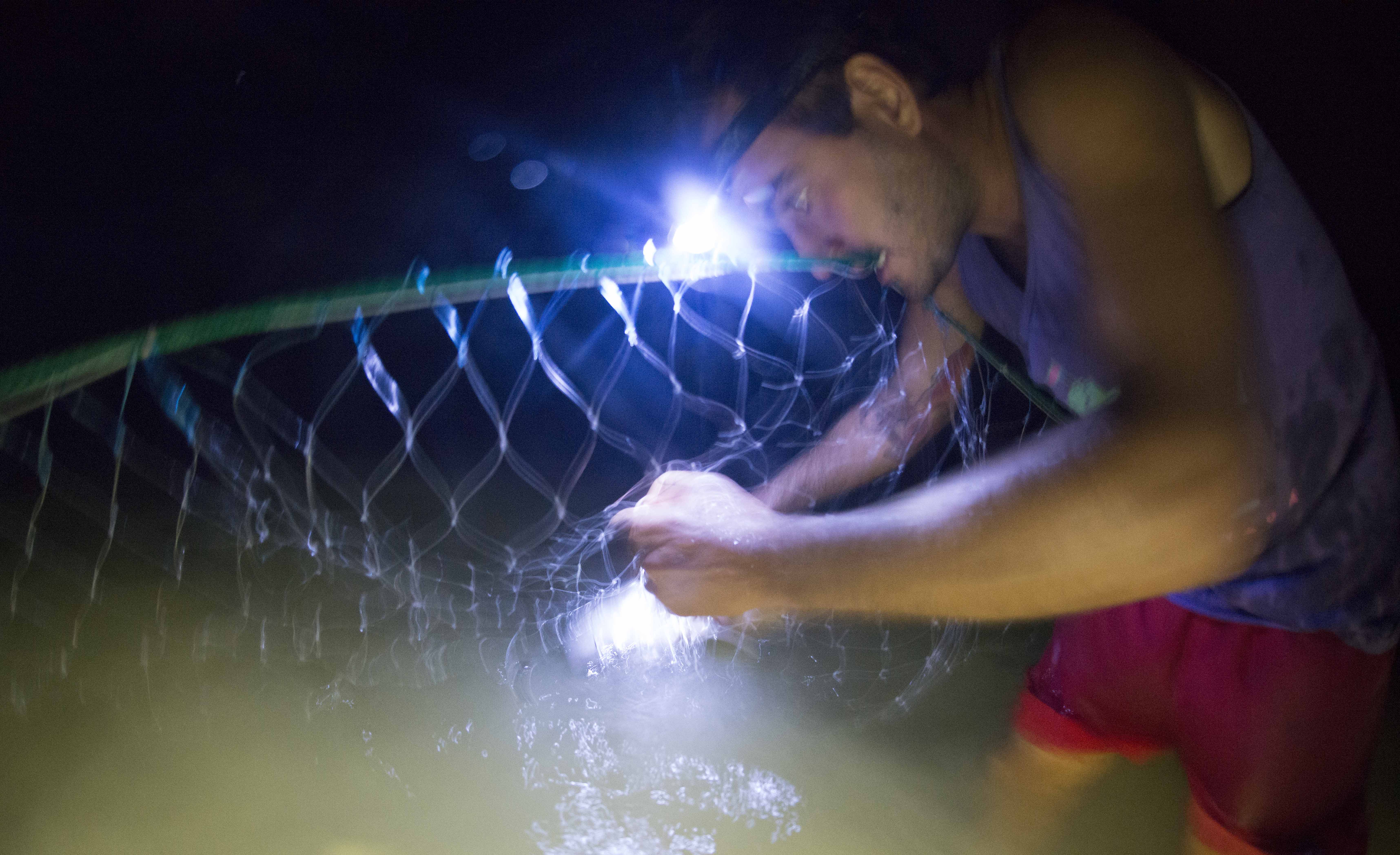 Removing a lemon shark from a gillnet. © Photo by Charlotte Sams.

It was the first night of the North Bimini juvenile lemon shark tagging programme, 2007. I was leading a gill-net set on the western edge of the North Lagoon. The water was about one metre deep and the substrate was rocky with patches of sand. At about 11 pm, an hour or so past high tide, our team was on its usual 15-minute check, flashing the torch down the net as we putted alongside in our boat and viewed the water from the surface. Suddenly splash, struggle – a shark was tangled in the net, then another and a few metres later there was a bigger splash. Excitedly, within the space of 60 seconds all my team had launched themselves into the water to rescue our catch: two juvenile lemon sharks and a bonefish. 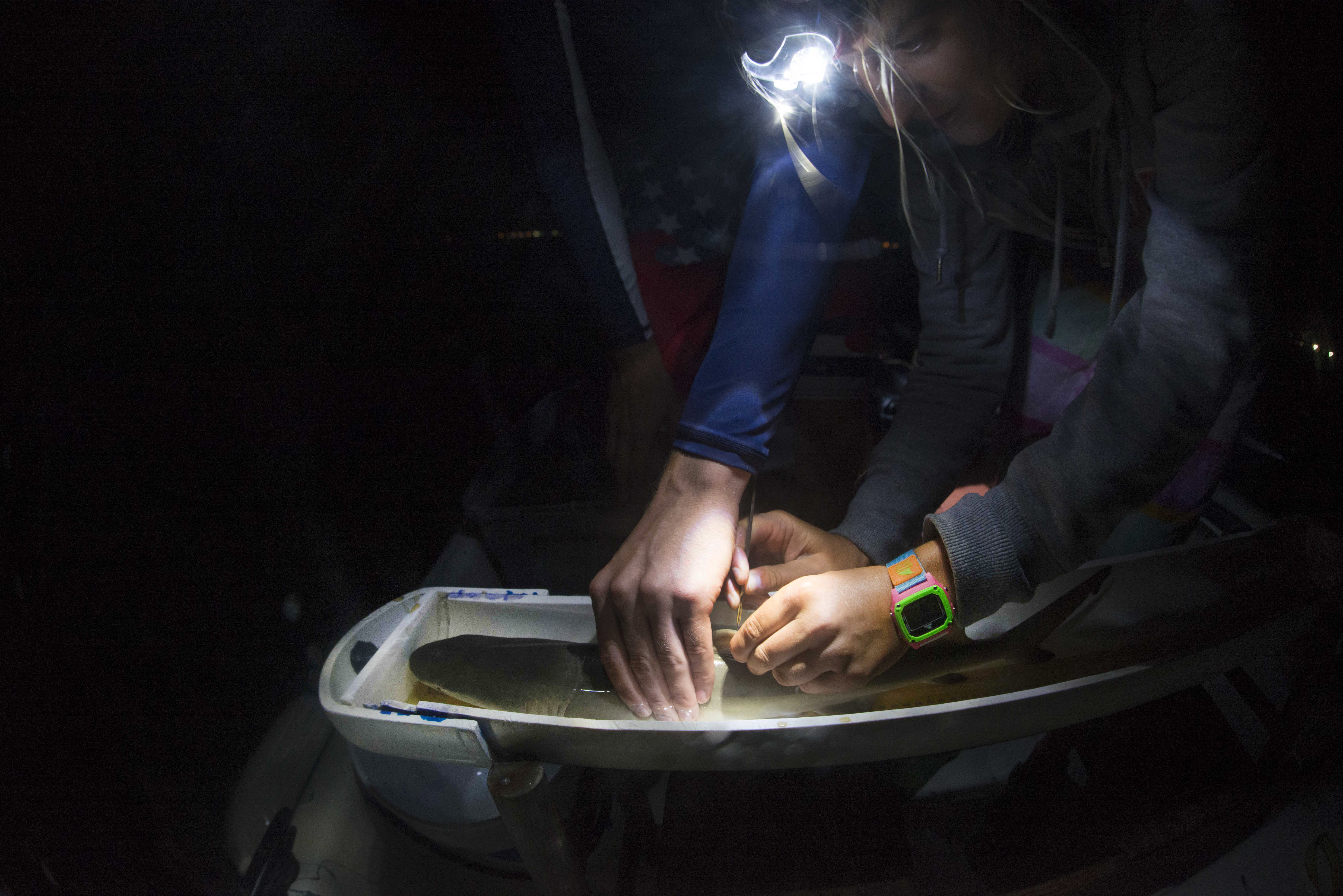 Knowing that other sharks might be caught in the last two sections of the net, I reassured my team that I would collect them and the sharks on the way back and continued the check. I motored slowly along the length of the net, inspecting it carefully and methodically. As I got closer to the mangrove edge, I noticed that a large section – about 15 metres – of the net had turned into a huge cloud of silt. I couldn’t see a thing. My first thought was adult lemon shark (yippee) and then I considered big nurse shark (oh no – the net would be destroyed). The Shark Lab frequently documents both species in shallow water during summer, either pupping or seeking mates, so it was possible that one had got tangled up. 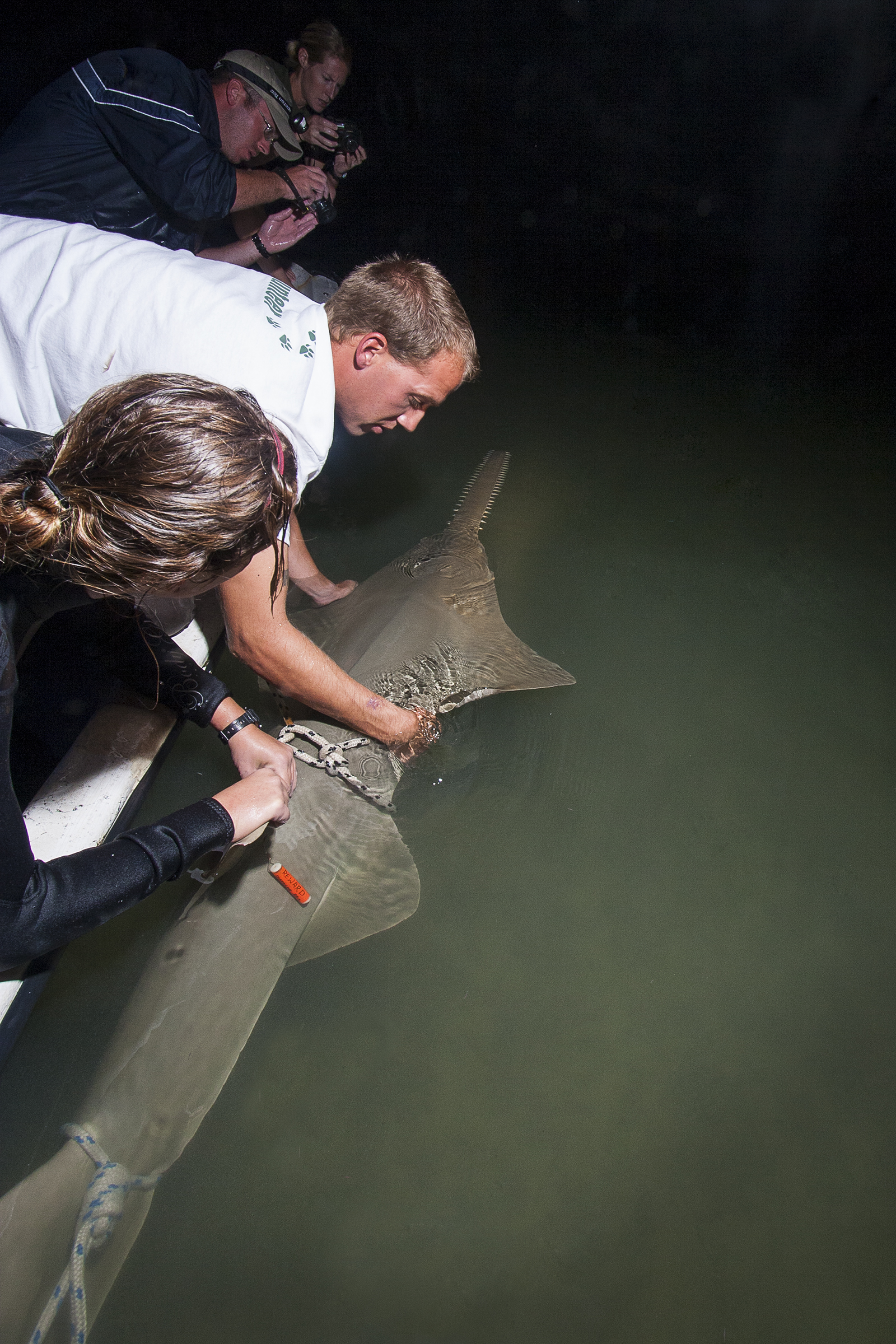 The current gradually cleared the silt away and, to my absolute amazement, surprise and excitement, out of the murk appeared the instantly recognisable rostrum of a sawfish, with its evenly spaced teeth like a prehistoric caveman’s weapon. Ecstatic, I roared at the top of my voice, ‘Oh my god, it’s a sawfish, we’ve caught a sawfish.’ Then I shouted down the radio, ‘We’ve caught a sawfish, a sawfish, woohoo.’ Wilson, one of the volunteers, answered, ‘You’re joking!’ ‘Do I sound like I am joking?’ I gasped. 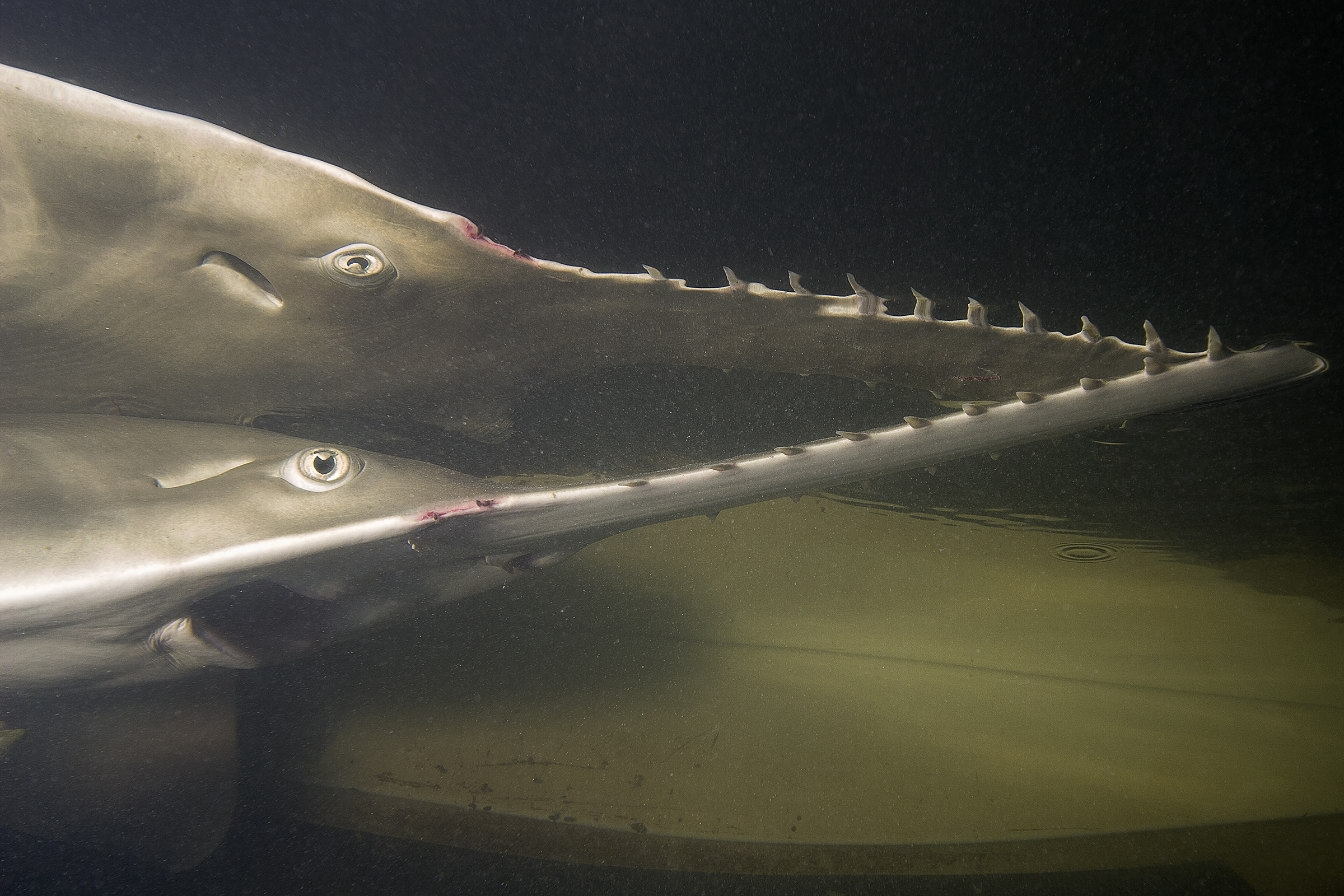 Within quick succession, there were yelps of joy and cheers down the radio and across the sound! Any normal person would have thought we had won the lottery or that a boat full of pirates’ treasure had got caught in our net. To us, this was the lottery – one of the rarest, most imperilled creatures in the ocean and we had the privilege of seeing it up close!

A ray with a caveman's weapon attached to its head. © Photo by Matthew Potenski