A probe into sawfish occurrence: in the laboratory of Global Sawfish Search

Studying sawfish occurrence at a global scale is challenging given their rarity and the harsh environments they live in. Diminishing sawfish populations are reported in up to fifty percent of countries that were once a habitat for sawfish. The question remains – where do sawfish still exist? The Global Sawfish Search project is planning to help shed more light on this question using environmental DNA (eDNA). eDNA is the fragments of DNA that all organisms shed into their environment as they go about their daily life. It has been dubbed as a game-changer for studying rare and endangered species because it is a non-invasive method of sample collection that does not expose the study species or its habitat to harm. The trick to finding sawfish eDNA in a soup of free-floating marine organism DNA is by having a tried-and-tested genetic tool – a probe.

Filtering water in the field provides the samples for eDNA analysis of sawfish. Here water is being filters in Florida to detect the presence of smalltooth sawfish. Photo © Madalyn Cooper | James Cook University

After spending a few months orienting myself in the new field of eDNA (and getting my PhD up and running), I quickly learned about the many hurdles and limitations that can impact the success of eDNA studies. The dynamic nature of shallow, coastal habitats that sawfish live in results in the rapid degradation, dilution and dispersion of eDNA fragments in the water. The interplay of biotic and abiotic factors, namely UV-irradiation, pH, salinity, temperature, microbial activity and particulate matter, with eDNA mean that any attempts to detect sawfish genetic material must be done within hours to days of an animals presence and, most importantly, with a meticulous and effective sample collection and analysis protocol. For this reason, when considering the task of using eDNA to study sawfish occurrence on a global-scale, we erred on the side of caution before taking the leap into the unknown. 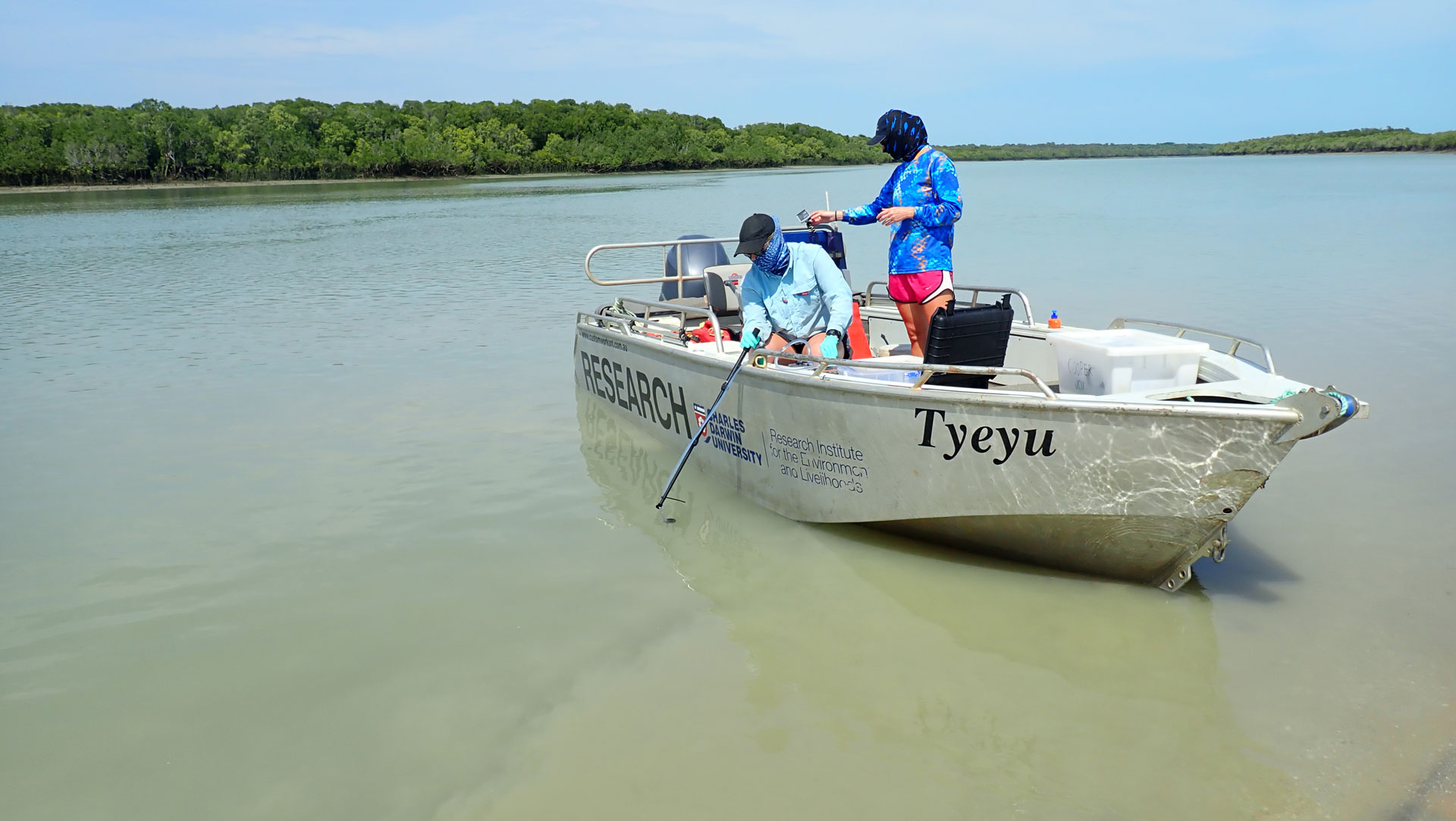 I have spent the past several months developing and testing probe assays for all five species of sawfish. The first place to start was in online databases of mitochondrial gene sequences for sawfish. Compiling a reference sequence database for our target species and all other co-occurring, closely-related elasmobranch species allowed us to determine the best region of the DNA to design a primer and probe assay for. Each primer and probe must be a complete match for a single sawfish species and general enough to cover individual nucleotide differences in sub-populations, without incorrectly identifying closely-related co-occurring sharks and rays. After primers and probe sets were created, the next hurdle was to test how they fared in the lab on genomic DNA.

I had to ensure that each assay would only detect its target sawfish DNA from tissue samples, so I collected small pieces of sawfish tissue from sawfish researchers, as well as a whole host of tissue samples from many other shark and ray species to start testing. I used a method called quantitative polymerase chain reaction (qPCR) that measures a unique fluorescent signal released from the probe when it successfully binds to its target sawfish DNA sequence. After three rounds of testing, optimising, going back to the drawing board, rinse and repeating, I had finally cracked the code. Our primer and probe assays were a success. I couldn’t get too far ahead of myself though, I knew there was more experimenting to do to make sure we could detect eDNA that is highly degraded and sparse in marine and estuarine environments. That is to say, if there was a sole sawfish in a few hundred meter radius of our sampling location that shed only a few cells containing DNA into its environment, we needed to know that we had a good chance of detecting it. To this end, short strands of synthetic DNA that simulated sawfish eDNA were created in the lab. The benefit of using synthetic DNA is that we could work out the number of DNA strands in a microliter of solution. We can then dilute the solution down to a series of solutions containing 10, 5, 2, and 1 strands of DNA and then test out our assays again using qPCR. After a few more months of trials, a few mishaps, and even some samples contaminated with synthetic DNA, I made it out the other side with five sawfish assays (one for each species) that could detect just one strand of DNA.

Relief at last, but we’ve got plenty more field and lab work ahead of us. With probes finalised we are now in a great position to find the remnant populations of sawfishes around the world using eDNA.