A perfect ending to a new adventure

Bridging the gap for sawfish conservation between Costa Rica and Nicaragua

Having a close encounter with a Critically Endangered Largetooth Sawfish (Pristis pristis) in the wild is like finding a “blue unicorn”; it is one of those rare and unlikely events that when it does happen you must pinch yourself to check that you are not dreaming. The afternoon of September 28th, 2022 was the day that we pinched ourselves and got to experience for the first time a fully grown Largetooth Sawfish. After spending several years searching for this cryptic and endangered species in remote areas of Costa Rica, we decided to try fishing for the first time in the San Juan River in Central America (natural border between Costa Rica and Nicaragua), about 100 km inland from the Caribbean coast. Based on local ecological knowledge, citizen science reports from local fishers (including catch and release), and positive detections from environmental DNA (eDNA) surveys that we have conducted in the entire country, the San Juan – Colorado River system along the northern region and northern Caribbean region of Costa Rica has been identified as a Hot Spot for the Largetooth Sawfish. However, due to the political instability of Nicaragua and subsequently to the COVID-19 pandemic, we decided to postpone our search for sawfish in this region for several years until late September 2022, when we resumed our fishing expeditions, enabling us to capture, tag and successfully release a live Largetooth Sawfish back to the wild. 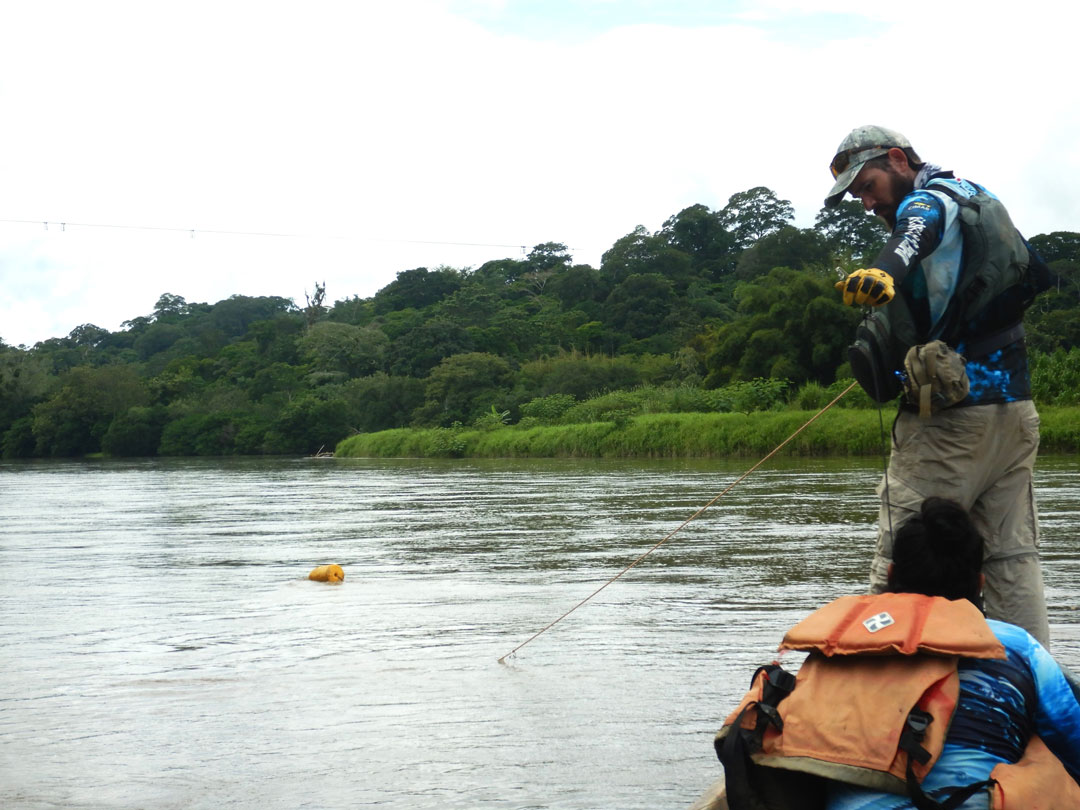 Our Sawfish Conservation Project in Costa Rica started with countrywide interviews during 2016 and 2017, through which we mapped the current and historical distribution of the species in the country and identified local threats throughout the country. Guided by results from interviews, we carried scientific fishing surveys using bottom-set longlines through 2017-2020 in remote areas of the northern and southern Pacific, and recently in the northern Caribbean. However, after years of fishing effort comprising hundreds of field hours and thousands of baited hooks, we were unable to catch any sawfish. In 2019 we partnered with the Global Sawfish Search and implemented a nationwide strategy to refine our interview results with the use of eDNA, which would allow the detection of the species without the need to capture it. Our sampling encompassed riverine, estuarine, and marine ecosystems in both the Pacific and Caribbean coasts of our country, in which we collected >550 eDNA samples. The results from this massive effort extended our understanding of the distribution of the species. Now the positive detections from eDNA supported the suggested hotspots identified by local ecological knowledge and reports from local fishers and directed our fishing surveys to the northern region (NR) and Northern Caribbean (NC) region.

(Left) the murky and fast flowing San Carlos River in the northern region. Photo by Johnny González | © Jorge Valerio (Right) the Colorado River and its system of caños and lagunas in the vast lowlands of the Northern Caribbean region. Photo © Mario Espinoza

During the 60’s and 70’s, these two regions presented research stations of the pioneer bull shark and sawfish researcher Dr. Thomas Thorson, and they also had a prominent importance during our interview process, contributing with historical and recent records of the species. However, in recent years (2019-2022), the San Juan River in the NR, and Barra del Colorado in the NC, have been a common place where local fishermen have captured both small and large sawfish. Therefore, the continuum of aquatic environments through both regions has been identified as a potential hotspot for this species and our focus of research and conservation efforts. Our first approach with fishing expeditions in these regions was in October 2020, when we surveyed Barra del Colorado, capturing several stingrays and one juvenile bull shark, although no sawfish were caught despite some recent records in the area. 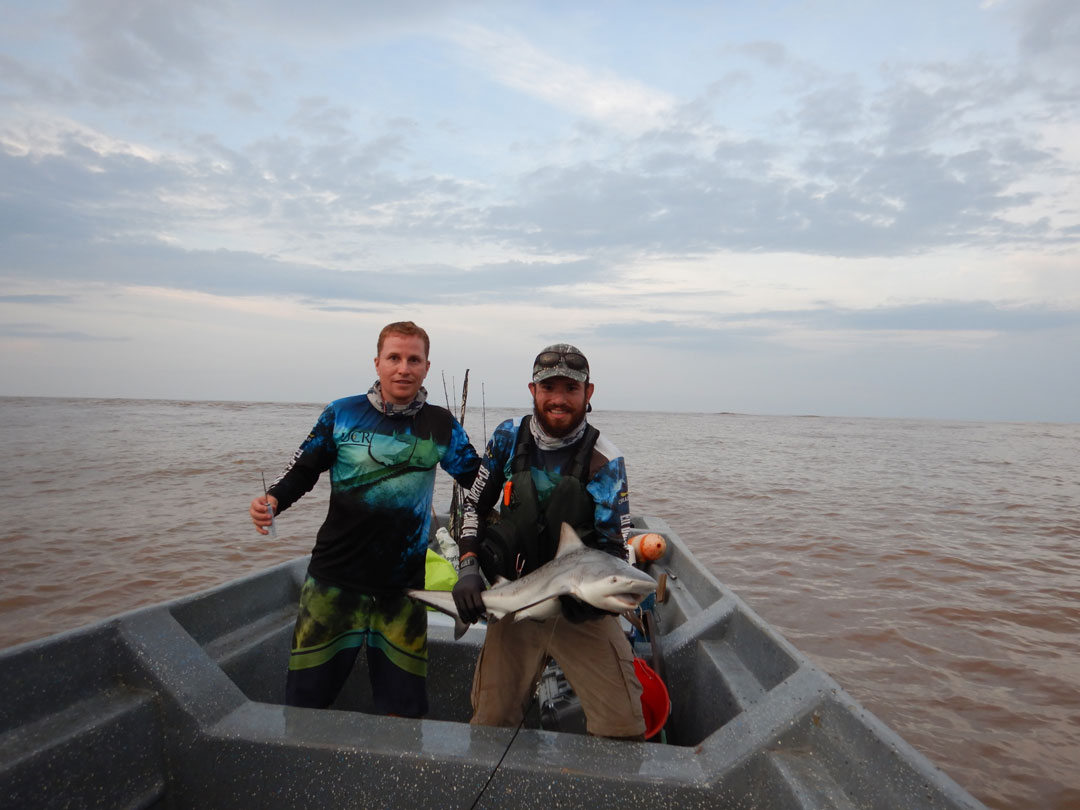 In September 2022, we headed to the riverine village of Boca San Carlos (NR), following a trail of recent records. Our team members for this expedition were Rubén González, local project collaborator; José Ortiz, our boat driver or botero; Johnny González, assistant and photographer; and Jorge, project researcher. During the next 1.5 days we set line after line of our bottom-set longlines in every suitable sawfish ground. Around 3:00 pm of our last day we set up our lines, rods and reels in a deep and slow pool. Within 15 minutes, one of our reels sounded the alarm and it was time for Jorge, the most experienced fisher, to struggle with whatever had taken the bait and was dragging us through the river. Three possible guesses, but a massive croc had the odds, followed by our desired sawfish, and last, a less likely bull shark. Forty-five minutes later, the animal started to surface, to the point where the line had to be pulled by hand. While fearing the croc in his mind, Rubén pulled fathom by fathom until a shark-like body with a thrashing saw-like rostrum emerged from the murky waters. Cheers, laughs, tears, and awe, finally the search was over as we carefully secured its rostrum and tail and headed to shore to work on it. 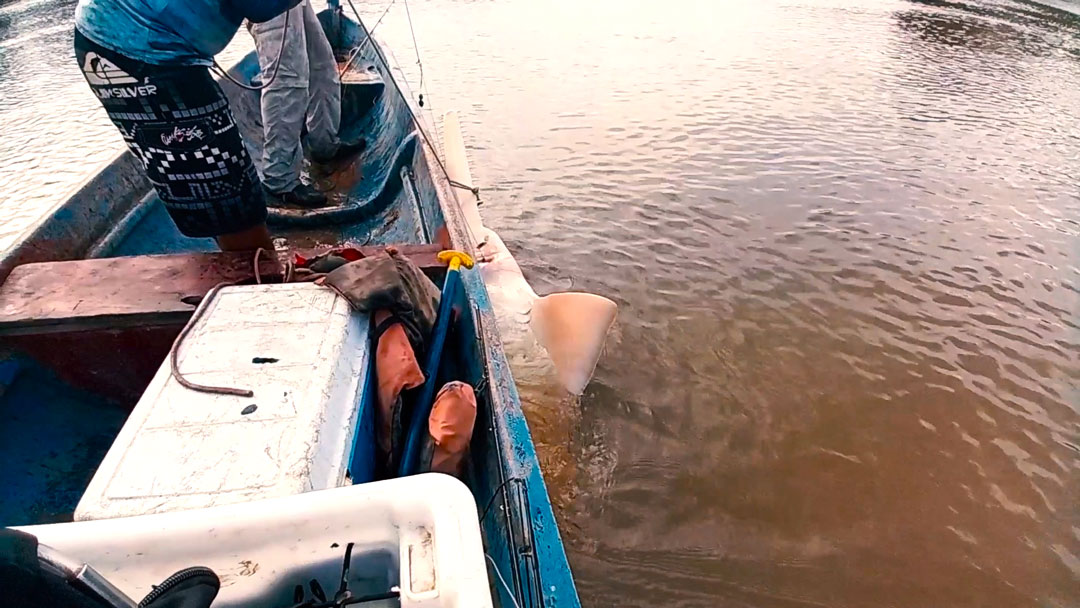 Measurements, tooth count, sex determination, maturation stage, genetic sample, PIT tag and an external tag for the 310 cm subadult male Pristis pristis named Thomas, honoring Dr. Thomas Thorson. A first for any research team working with sawfish in the binational San Juan-Colorado River system in more than 40 years since the research carried by Dr. Thorson. After ~30 minutes of work, it was time to release Thomas which had been resting with its head submerged alongside the boat. That’s when we realized that it was fully recovered, as in our several attempts to cut the hook, it thrashed wildly, sending our bolt cutters to the bottom of the river, and almost tipping us over. Eventually and with the spare bolt cutters, we cut the hook and took both its tail and saw rope off for a successful release, which brought tears of joy once more. 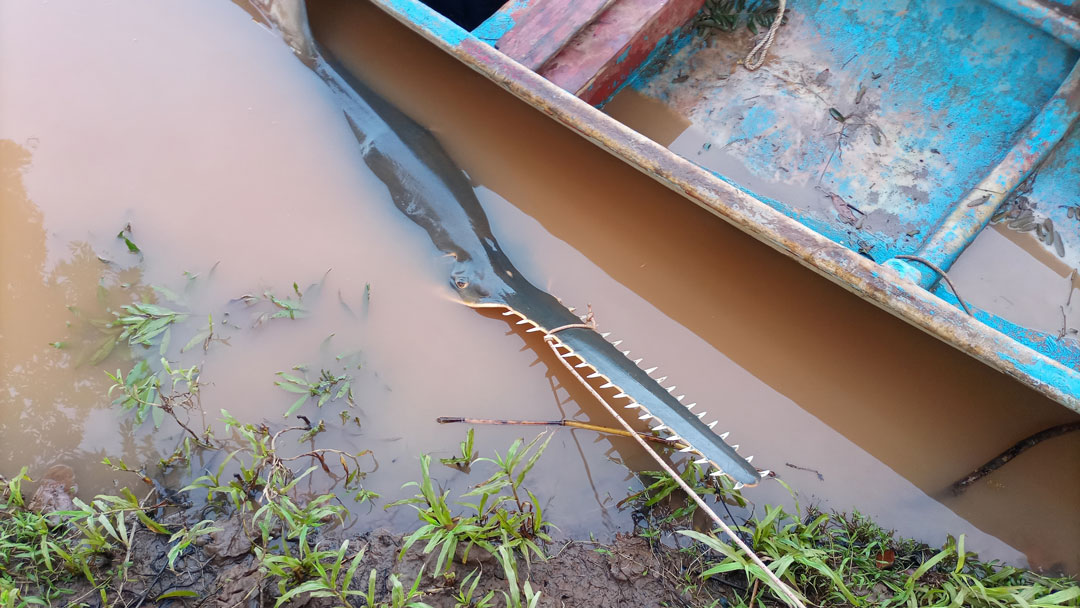 Thomas the Largetooth Sawfish on the shore while samples are being taken. Photo by Johnny González | © Jorge Valerio

Until now, Thorson’s sawfishes have remained unstudied for more than 40 years and this capture opens the door to study them once again in their natural environment. This next stage of our sawfish conservation effort will employ updated technology, to try to answer questions that arose from Thorson’s research and from our own. 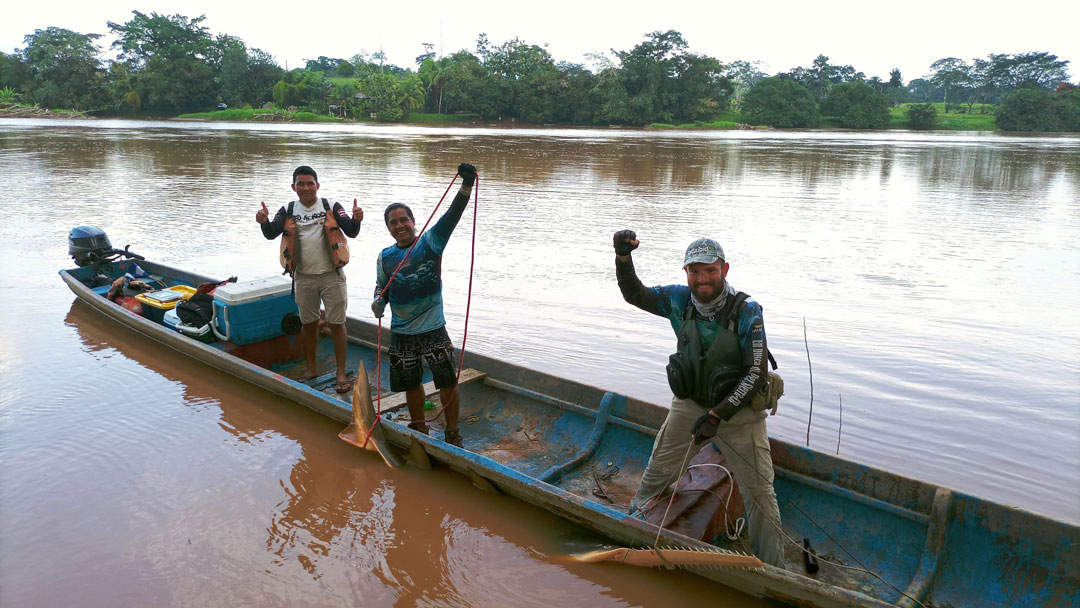 More than 40 years later, sawfish research in its natural environment may start once again in the San Juan-Colorado River System. We are deeply thankful with Rubén, José and Johnny, who committed to the capture of this very important first specimen. Photo by Johnny González | © Jorge Valerio

Project
Tracing sawfishes in the last habitats of Costa Rica