A drop in the ocean

“A teardrop-shape in the Ocean” – this is what we were looking for back in April while surveying the reef from the roof top of our Dhoni, with nothing more than a pair of polarized sunglasses, a focused mind and a pinch of patience. Although the teardrop we were carefully searching for is approximately 5 to 6 meter in size, with an untrained eye one might feel like looking for nothing more than a drop in the sea! 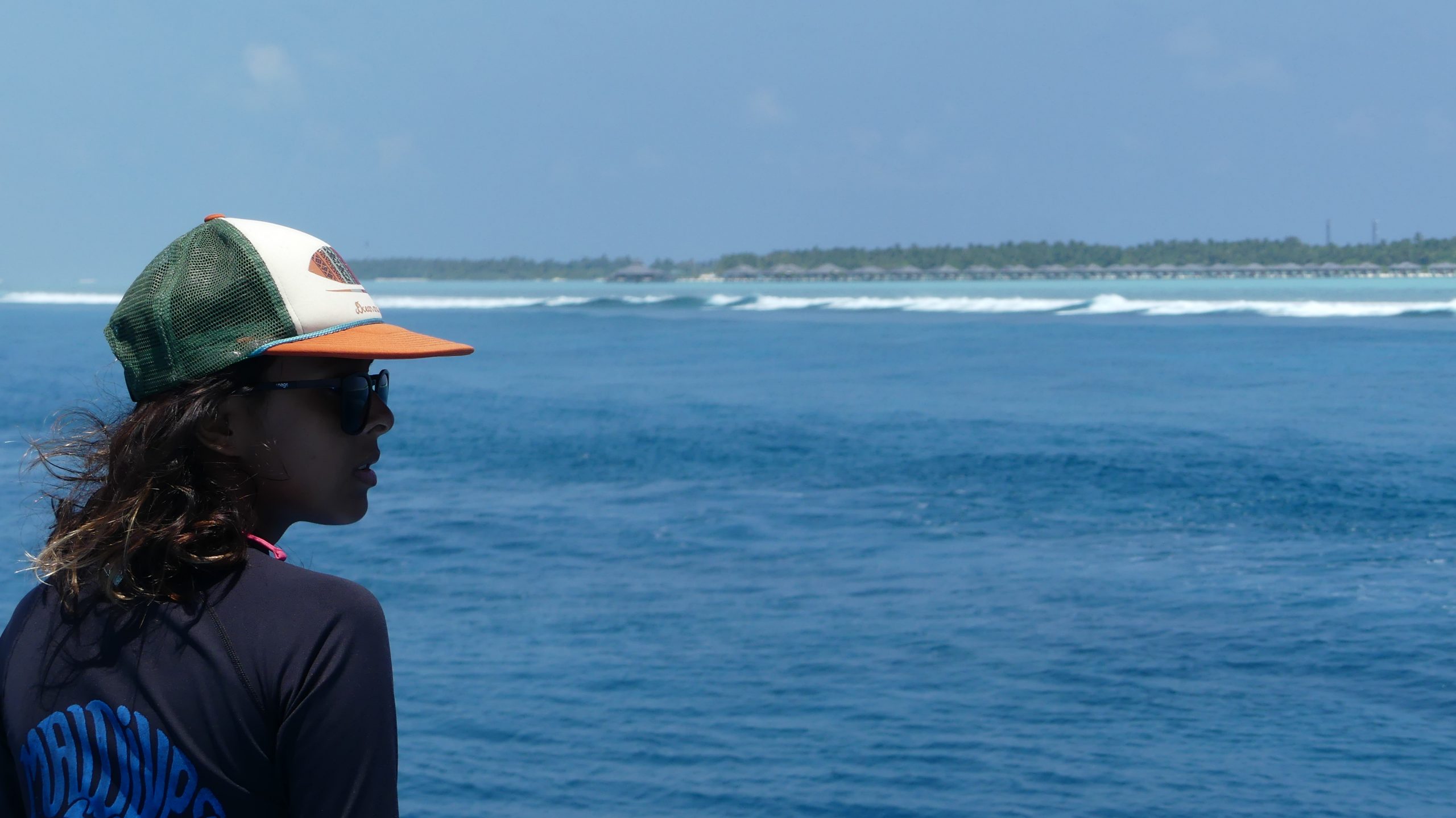 On a good day in the South Ari atoll (Maldives), if a whale shark is cruising close to the sea surface in the open water or in the shallows, it’s perceived colouration will vary from an intense brown, brightened by the strong sunlight, to a dark and solid grey shadow making the search fairly easy. 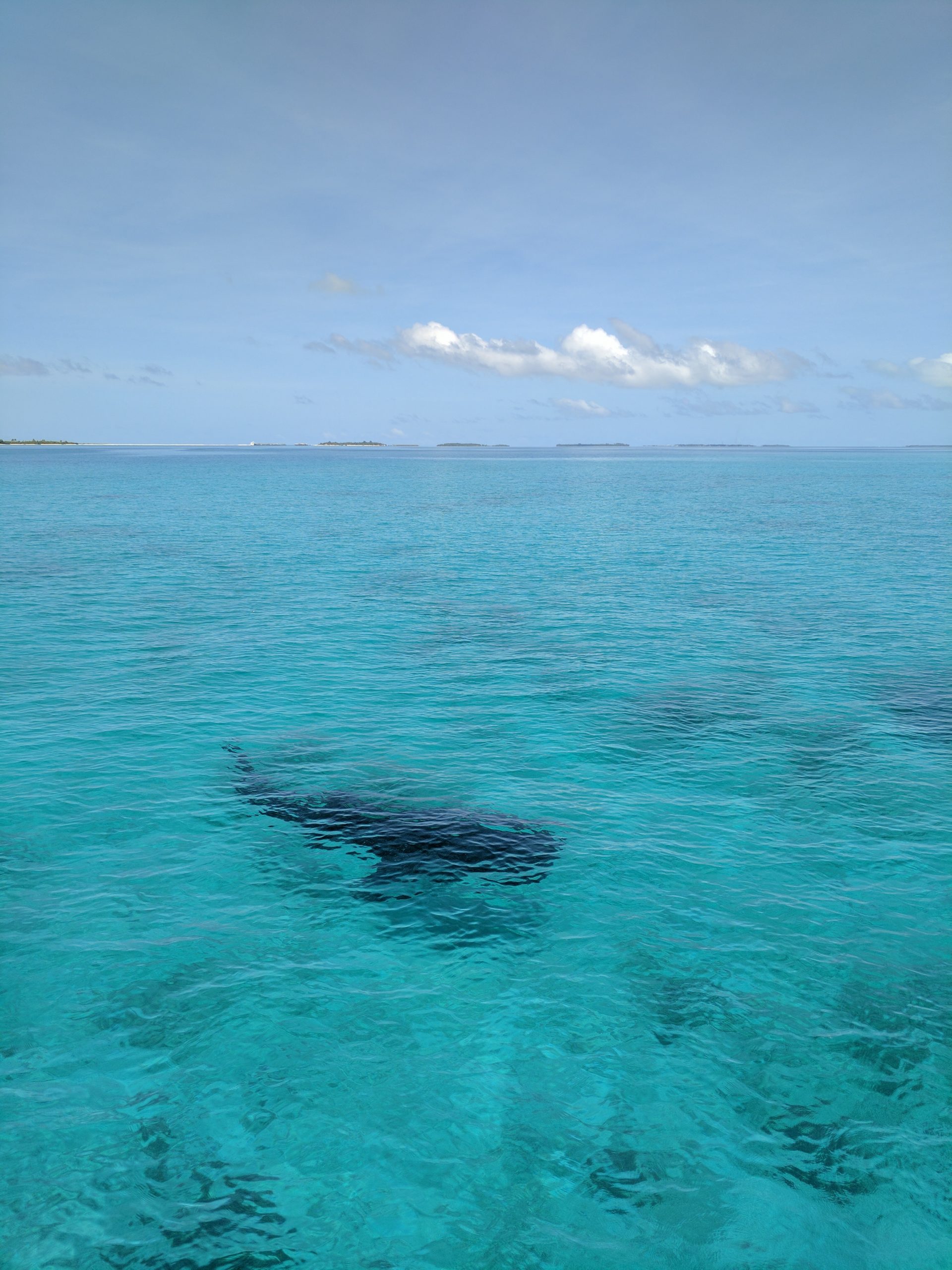 Things can become more difficult on a cloudy day, when even if only a few meters below the surface, the largest fish of the sea can easily vanish from our sight. This happens because “disruptive colouration” (a form of camouflage, thought to be particularly useful during their early life stages) owed to the thousands of pale spots and stripes that break up their dorsal basic grey colour, will make them difficult to spot, especially as they cruise over a complex coral reef environment. Apart from camouflage, their spot patterns are also very useful to researchers as they have been found to remain constant through time. In particular, patterns within the top of the fifth-gill slit, the posterior-most point of the pectoral fin, and the bottom of the fifth-gill slit, are unique characteristics used to identify individual whale sharks. Bilateral images can be taken from this body area and processed with a semi-automated photo-identification software. 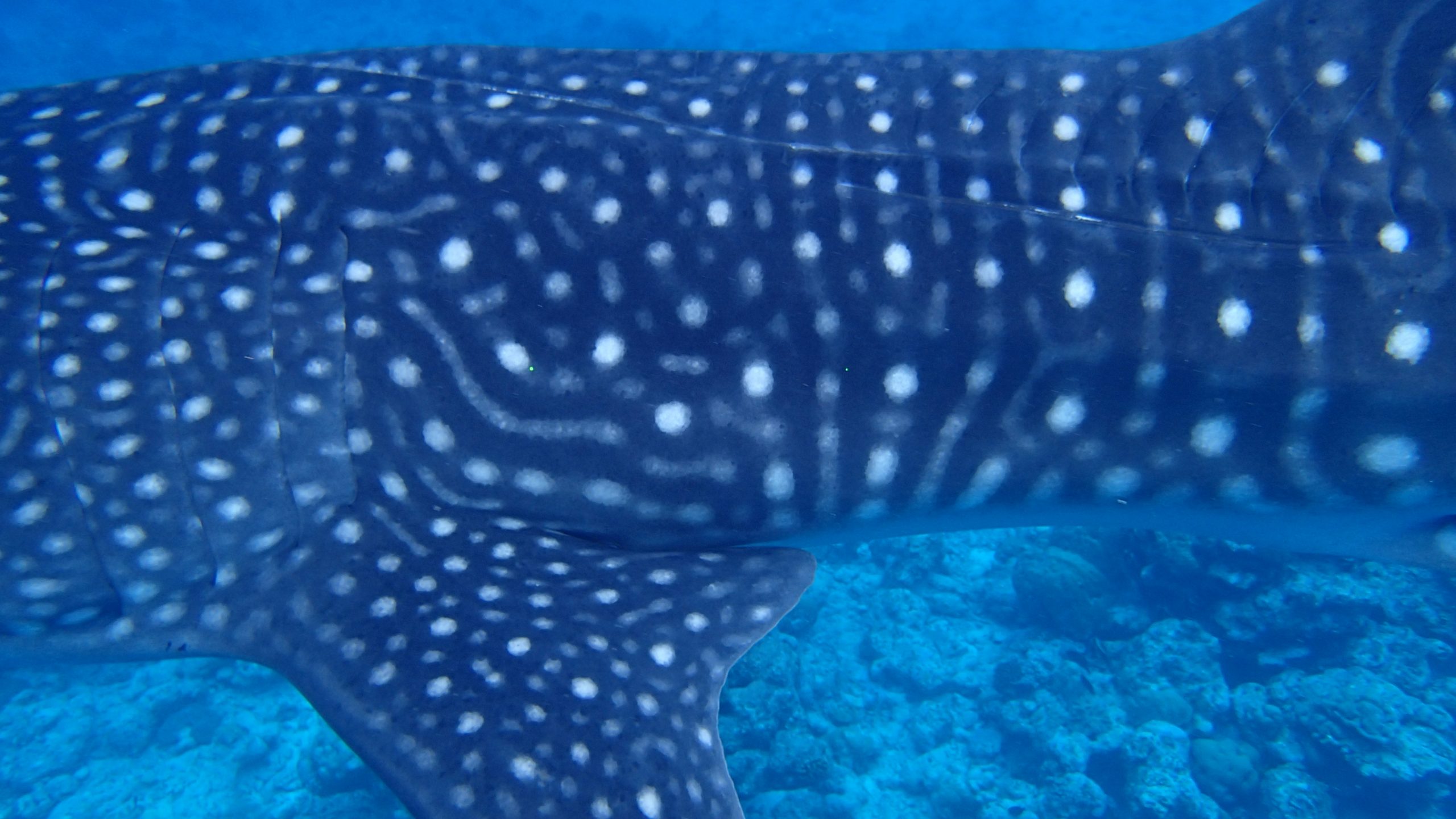 A typical whale shark identification shot: WS108 known as “Andy” has been sighted by MWSRP 171 times since 2009. Green points correspond to the lasers used in laser-photogrammetry.  Photo © Peter Barnew

Some sharks can be immediately recognized by our team as their patters remained etched into our minds, due to quite unexpected underwater sampling opportunities. In fact, the “zig-zag” pattern in the picture above belongs to the whale shark WS108, also known as “Andy”, who provided us with the first “poo nugget”. Such alternative opportunistic data collection, in the past, has proven to be successful when investigating what these species feed on. In our case, these samples have allowed us to carry out this project on the potential exposure of whale sharks to microplastic pollution. The samples used within our study were collected by the Maldives Whale Shark Research Programme (MWSRP), our local and established collaborative NGO. MWSRP monitor the local whale shark population through mark-recapture photo identification since 2006. Their continuous monitoring is a fundamental aspect in the overall understanding of the aggregation and for its the conservation of this species. In addition to occurrence data, they also collect information on body size measurements through laser-photogrammetry, behaviour and recording of injuries rates (of natural- or anthropogenic- origin). 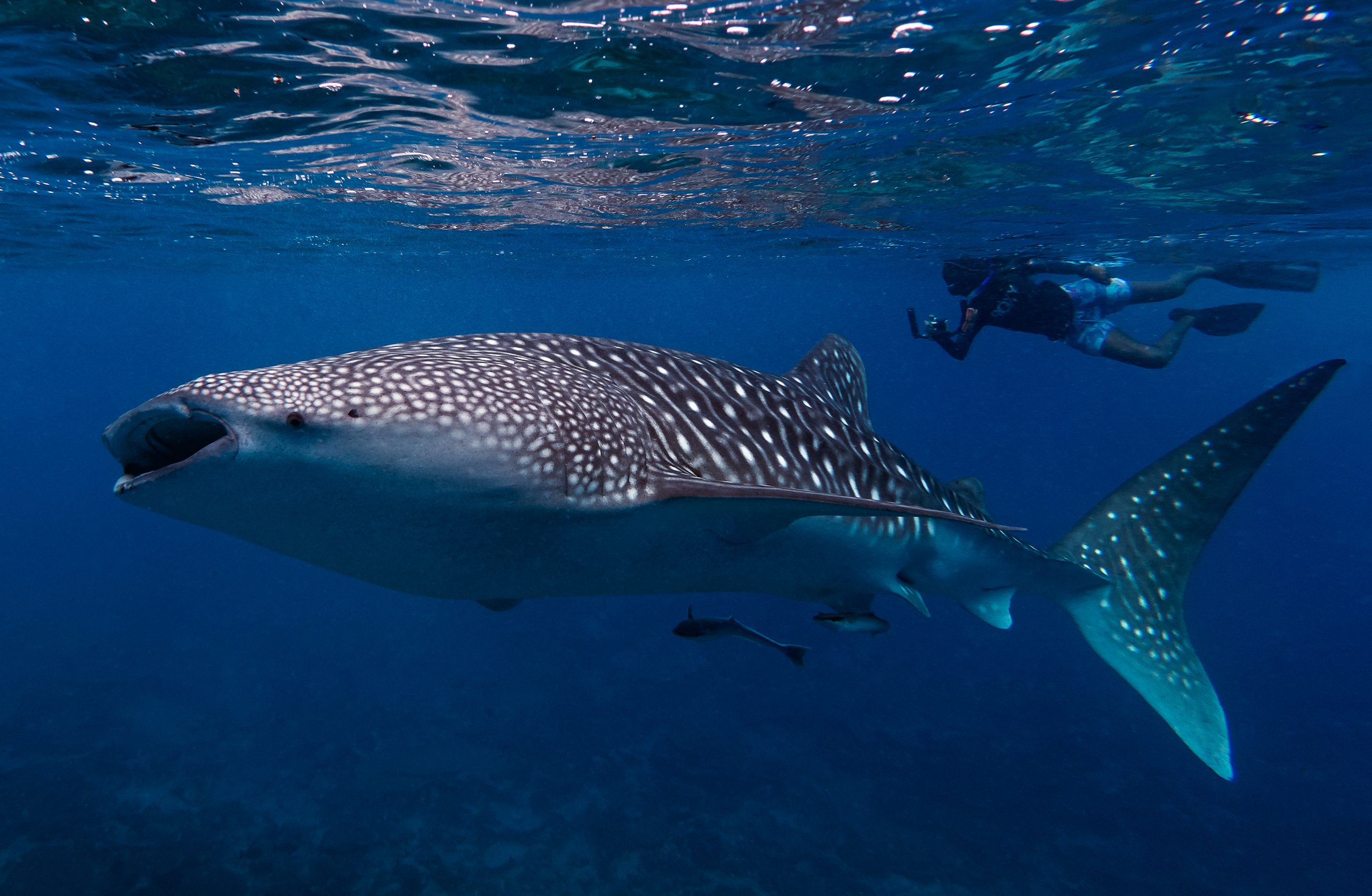 Whale sharks have a high dispersal pattern and in order to understand their aggregations, residency patterns and population dynamics the founders of MWSRP developed the Big Fish Network (BFN) in 2013. The BFN is an online citizen-science platform on which basic encounter information is recorded at the national scale. Beyond increasing data collection this tool also aims at raising awareness and marine stewardship in the country.

To date, the collection of this long-term data has allowed us to distinguish the Maldivian whale shark aggregation of over 460 individuals, from others in the world due to its non-seasonal nature. Especially in South Ari, whale sharks of 3 to 8 meters in size occur all year round, with an apparent semi-annual residency pattern, moving west from December to April and east from May to November. Given the significant difference in body size observed between newly identified sharks and the returning individuals, this region is also recognized as an important secondary nursing ground for whale sharks in the Indian Ocean. “A safe heaven”, where individuals grow until maturity is reached under low predation risks and in high nutrient abundance, before leaving for new, and to us still unknown, oceanic destinations. “A safe heaven” ground, which might be increasingly threatened by the ubiquitous distribution of a hardly visible enemy – the microplastics. 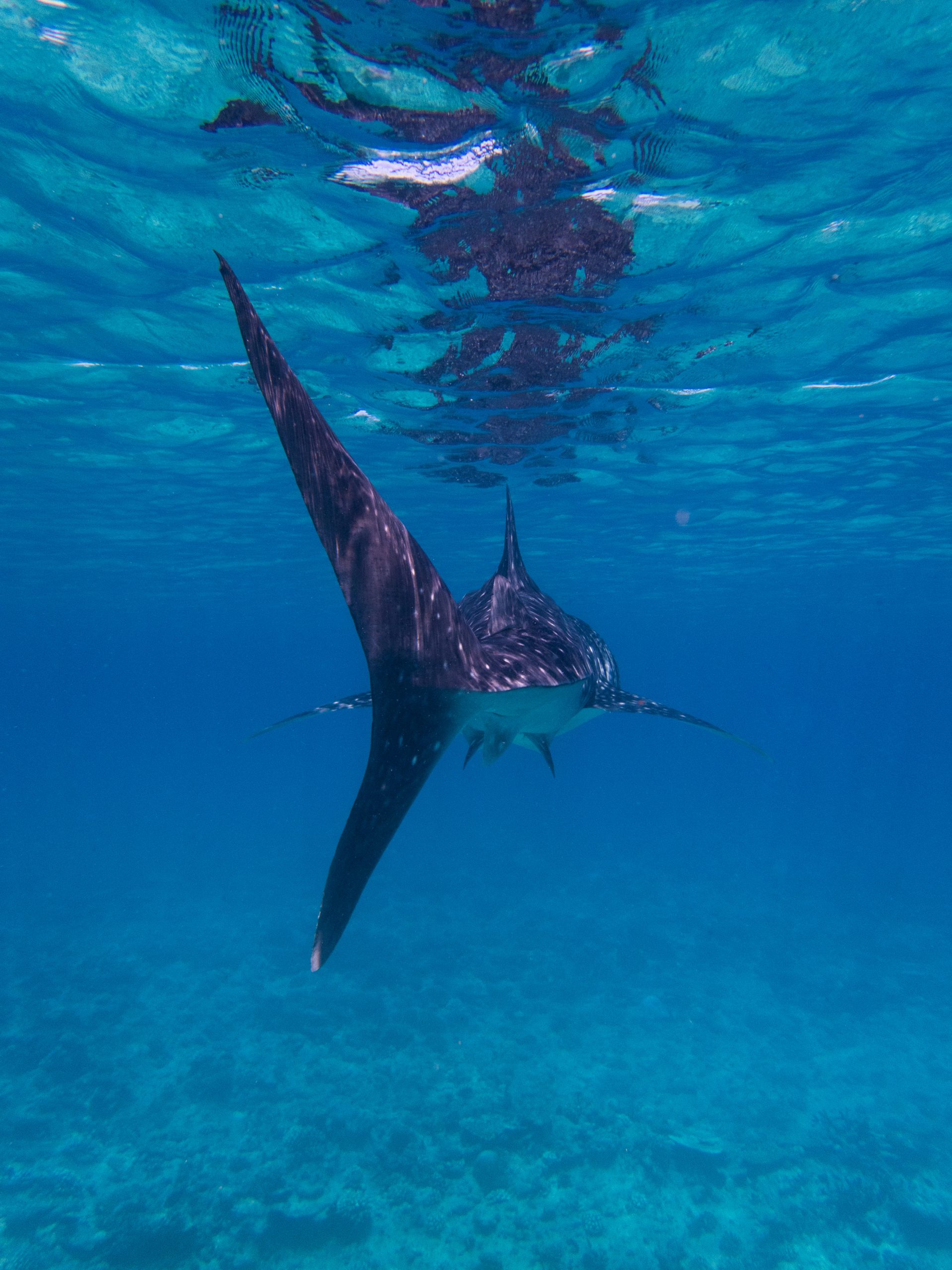 Back to the blue, a whale shark heading to the unknown, South Ari Atoll, Maldives. Photo © Alexandra Childs