PangeaSeed Foundation is a globally engaged non-profit organisation acting at the intersection of culture and environmentalism to further the conservation of the oceans. Its mission is to empower individuals and communities to create meaningful change for the oceans by raising public awareness of critical environmental issues through science, education and ARTivism (SEA).
Through its ground-breaking Sea Walls: Artists for Oceans public art programme, PangeaSeed Foundation has created more than 450 educational, ocean advocacy murals in 18 countries, bringing the ocean into streets around the globe.

PangeaSeed Foundation’s global Sea Walls: Artists for Oceans programme took place in Santa Cruz, California, from 13 to 18 September 2021. It created 15 ocean advocacy murals and hosted various public events to increase interest and engagement in marine stewardship within the Santa Cruz community.
Beyond displaying purposeful, ocean-themed public art, Sea Walls Santa Cruz featured week-long public programming designed to help facilitate an ongoing relationship between the Santa Cruz community, the murals and the environment. Activities such as youth outreach, waterfront clean-ups, mural walking tours and a film screening made it a well-rounded experience for all ages.
The Save Our Seas Foundation was honoured to participate in the Sea Walls Santa Cruz event as its conservation partner, sponsoring the event and a mural by artist David Rice. David’s work blends an organic style with graphic overlays, combining the natural world with a geometric (man-made) presence. This combination speaks to how instead of only a natural world existing, or one that is only man-made, the two can co-exist in harmony if the dominant party yields to this cohesive existence. David was the perfect fit for the Save Our Seas Foundation’s mural, which aimed to promote awareness about human impacts on sharks. Sharks, on average, are responsible for fewer than 10 human fatalities annually; humans, however, kill more than 100 million sharks every year. 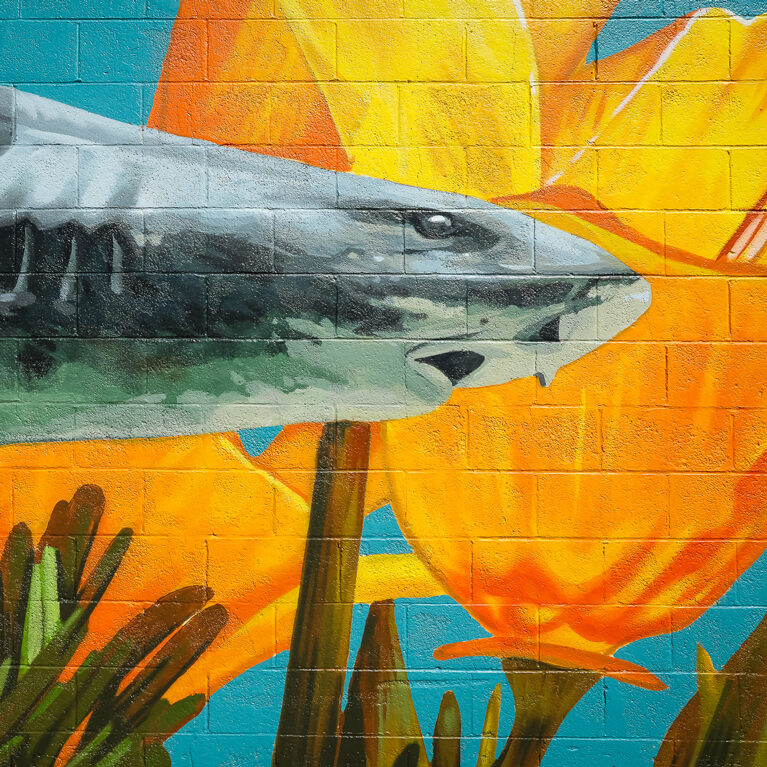