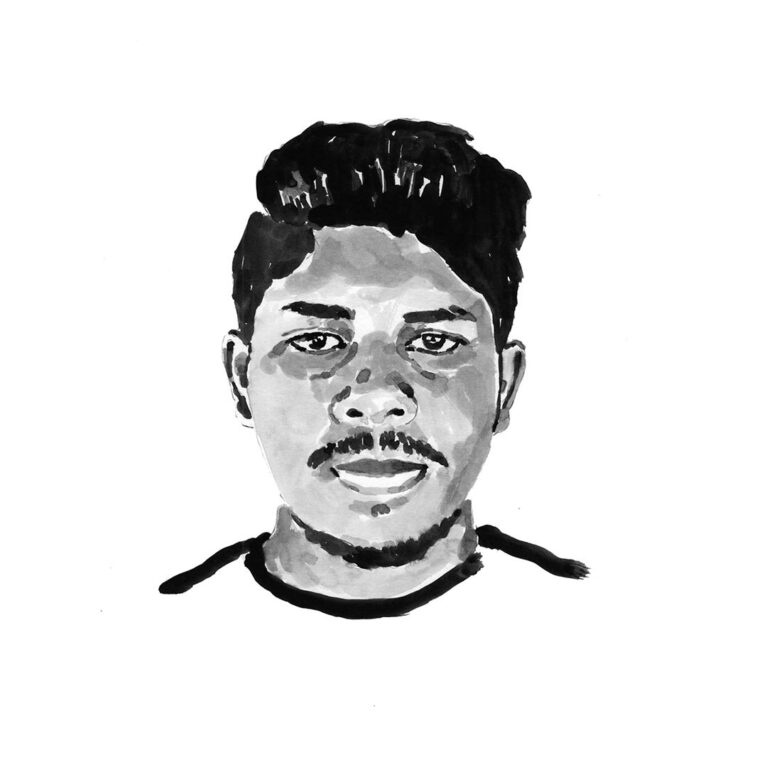 I am a young researcher in the field of fisheries science and I have a passion for marine biology and ecology, conservation and fisheries management in Sri Lanka. Unfortunately, I had no interaction with the marine environment until I was 20, although in those days I enjoyed seafood very much. I first got an opportunity to study marine biology and fisheries science when I embarked on my Bachelor’s degree in 2012. I became fascinated by the marine environment and the organisms that live in it. At the same time, I learned that ocean resources are not infinite but are being severely exploited by humans. So I decided to make it my life’s goal to have a positive impact on fishery resources in Sri Lanka. I was able to begin this amazing journey in November 2017, when I began working as a marine biologist with the Blue Resources Trust and had the opportunity to work on the Sri Lanka Elasmobranch Project. Through this project, I gradually learned about shark and ray fishing around the world and especially in Sri Lanka, which is one of the leading shark-fishing nations. Shockingly, of the 92 Sri Lankan elasmobranch species, more than 40% are listed as Critically Endangered, Endangered or Vulnerable – in other words, threatened with extinction. Fourteen are listed by the Convention on International Trade in Endangered Species (CITES) as requiring protection from overexploitation. All that I learned encouraged me to study even more about sharks and rays to help protect them from overfishing and also ensure sustainable livelihoods for stakeholders.

I am a lead researcher of the Blue Resources Trust’s Sri Lanka Elasmobranch Project for the north and east. The primary objectives of this project are to highlight the magnitude and composition of Sri Lanka’s elasmobranch fisheries and to collect baseline data (identification photos, dimensions, sex, maturity, fishing gear used and catch location) and tissue samples (for genetic and stable isotope analysis) for the species. Across the country, people depend on sharks and rays as affordable sources of protein and as a means of earning a livelihood through the sale of meat, shark fins, mobula gill plates and stingray skins. Thirty years of civil war in Sri Lanka resulted in a very big research gap in the country’s elasmobranch fishery, especially in the north and the east. Since 2017, when the Blue Resources Trust started the first systematic elasmobranch studies, more than 900 days of surveys have been conducted and 300 questionnaires about Rhinopristiformes species in Sri Lanka have been completed. Long-term data revealed that Mathagal, in the north, is the only place where the Critically Endangered sharpnose guitarfish is frequently recorded (80% of survey days, with 25% of specimens being juveniles), while survey results showed that more than 50% (24 species) of the species recorded in the north occur at Mathagal. In addition to elasmobranch fisheries, the Blue Resources Trust focuses on coral reefs, sustainable livelihoods, marine protected areas and the development of domestic and international marine policy. This means that through the data I collect for the elasmobranch project, we can help shape policy in Sri Lanka and across the region to provide greater protection for species and their habitats – and thereby benefit local communities. The trust also encourages students and scientists to expand its research and I hope that, through my project, we can collaborate more and encourage new researchers, especially in Sri Lanka.

Since December 2017 I have been conducting surveys with a special focus on the northern, eastern and north-western coasts of Sri Lanka as part of the Sri Lanka Elasmobranch Project. I spend many days of the month travelling between landing sites across Sri Lanka and typically spend five to seven days at each one. When I conduct surveys at the landing site, I collect measurements and take identification photographs of all landed sharks and rays that day. I also collect tissue samples from some specimens and engage the fishers, traders and stakeholders in conversation, asking them about where they fish and the gear they use, the prices they get for their catches and other general information. At times the fishers reveal interesting details and anecdotes, such as undocumented behaviour of fish. Older fishers can sometimes provide information about species that are rarely seen today or they provide insight into old fishing methods that are no longer used. When I return from the markets, I enter my data into a spreadsheet, sort through my identification photographs and store the collected tissue samples in the freezer. I then prepare for the next day of surveys by washing and preparing my equipment, including my camera, measuring tape and tissue sample tubes. Fisheries research is a rapidly growing field and it is fascinating to read about innovative research methods and techniques. I also enjoy spending time learning about these methods and experimenting with applying them to our fisheries dataset.

Gobiraj is the lead researcher for the Blue Resources Trust’s “Sri Lanka Elasmobranch Project” for the north and east coasts. To understand the composition of Sri Lanka’s shark and ray fisheries, with a particular focus on Critically Endangered sharpnose guitarfish, he collects identification photos and a host of other measurements, as well as gathering tissue samples for genetic and stable isotope analysis. Gobiraj also speaks to local fishers to understand fishing gear and catch locations. He aims to use his project’s insights to help shape policy and better protect sharks and rays – and the sharpnose guitarfish – across the region.