In spring 2019 a male beluga whale wearing a harness inscribed with Cyrillic script appeared in Norway’s fjords and was soon dubbed the ‘spy whale’. Lindsay Rubincam has been monitoring him to help inform the future of this ‘national treasure’.

How did you find yourself in Norway conducting research on a beluga whale that has apparently been trained?

In April 2019 I was in contact with Eve Jourdain, the founder of the Norwegian Orca Survey who was studying orcas in Norway. I had always wanted to see whales in Norway and she was helping me plan a trip. Before long we were talking about the so-called ‘spy whale’ that had turned up in the northern fjords and was featured on news bulletins and had gone viral on social media. It was clearly an urgent situation and we discussed what we could do to help. I have worked with trained belugas for several years and know veterinarians familiar with the species. We began to develop a plan to assist on-site and to put representatives from the Norwegian fisheries department in contact with skilled professionals who might be able to provide support for this ‘lost’ whale. 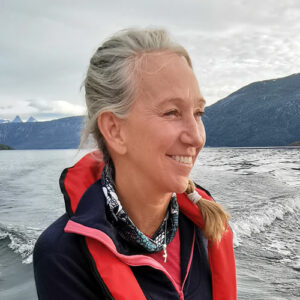 What in your background enables you to contribute to looking after a malnourished beluga?

By no means do I claim to be an expert on beluga whales, but I have looked after them in managed-care and I’ve spent nearly 30 years building relationships with trained cetaceans. Once we realised that this was a trained whale in a compromised physical and potentially emotional state, we knew something needed to be done. Eve decided to go to Hammerfest to evaluate the situation first hand and I arrived a week later.

How would you describe attitudes in Norway towards the beluga?

When Hvaldimir, as the whale’s been called, first arrived in Hammerfest everyone wanted to spend time with him. To some people he’s a celebrity, even a national treasure. Others thought that whether he lived or died, nature should be allowed to take its course. But when they saw his ‘personality’ as he sought connection with humans, they changed their minds and the whole town became protective of him and tried to keep him safe. When he left Hammerfest, the townspeople said it was as if he had taken with him the ‘spirit’ he had brought to their harbour. As he travelled south, more and more people became excited about seeing the friendly whale they’d heard about.

But not everyone has been a fan of Hvaldimir. Since leaving Hammerfest, the beluga has developed a particular preference for fish farms, which he is apparently quite familiar with. Having been in a training environment, he is clearly used to humans and he seems to take pleasure in being around the workers at the fish farms and to ‘enjoy’ following their boats. The problem with farms, however, is that workers need to enter the water to do their job and he can interfere with that. Moreover, his presence is stressful to the salmon, which can affect their health and welfare, as well as the business. Because of this he can be seen as a nuisance, even a threat.

What are your team’s objectives in monitoring Hvaldimir and how do you go about it?

The team comprises Joar Heston, the local fisherman who originally removed Hvaldimir’s harness, Fabrice Schnoller, a cetacean acoustics expert, and myself. Our original intention was to monitor him over a period of a year, tracking his location and regularly assessing his behaviour and physical condition. The Norwegian Fisheries Department would then be able to use the information we gathered to review the potential to relocate him to an area where he could socialise with other belugas. But between Covid-19 and his continual movements, our plans were made more complicated and we had to adapt them. Following him has been tricky, but his popularity has meant that social media could provide us with a roadmap. By connecting with people directly through social media posts, we have been able to track his whereabouts and what he’s been doing. 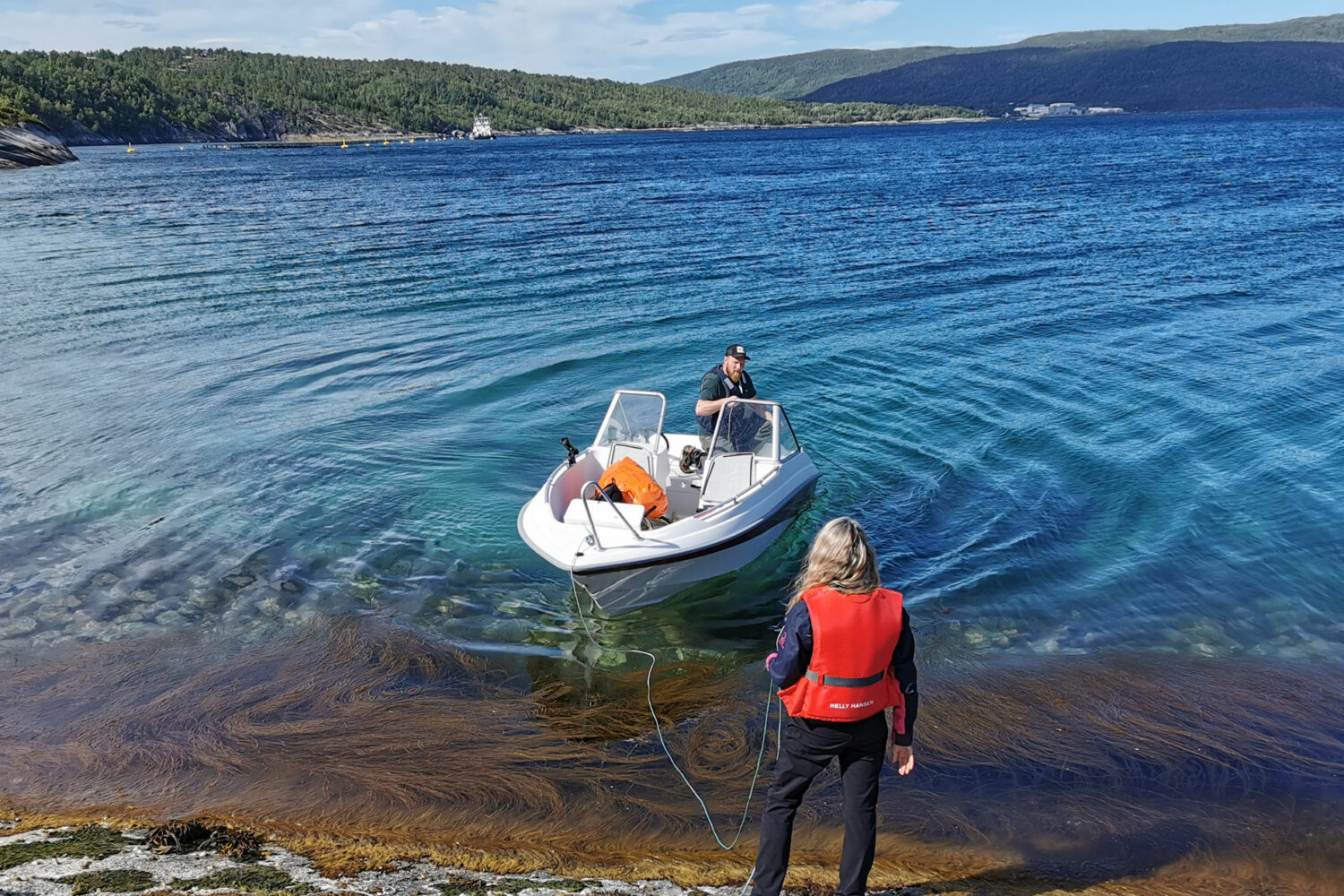 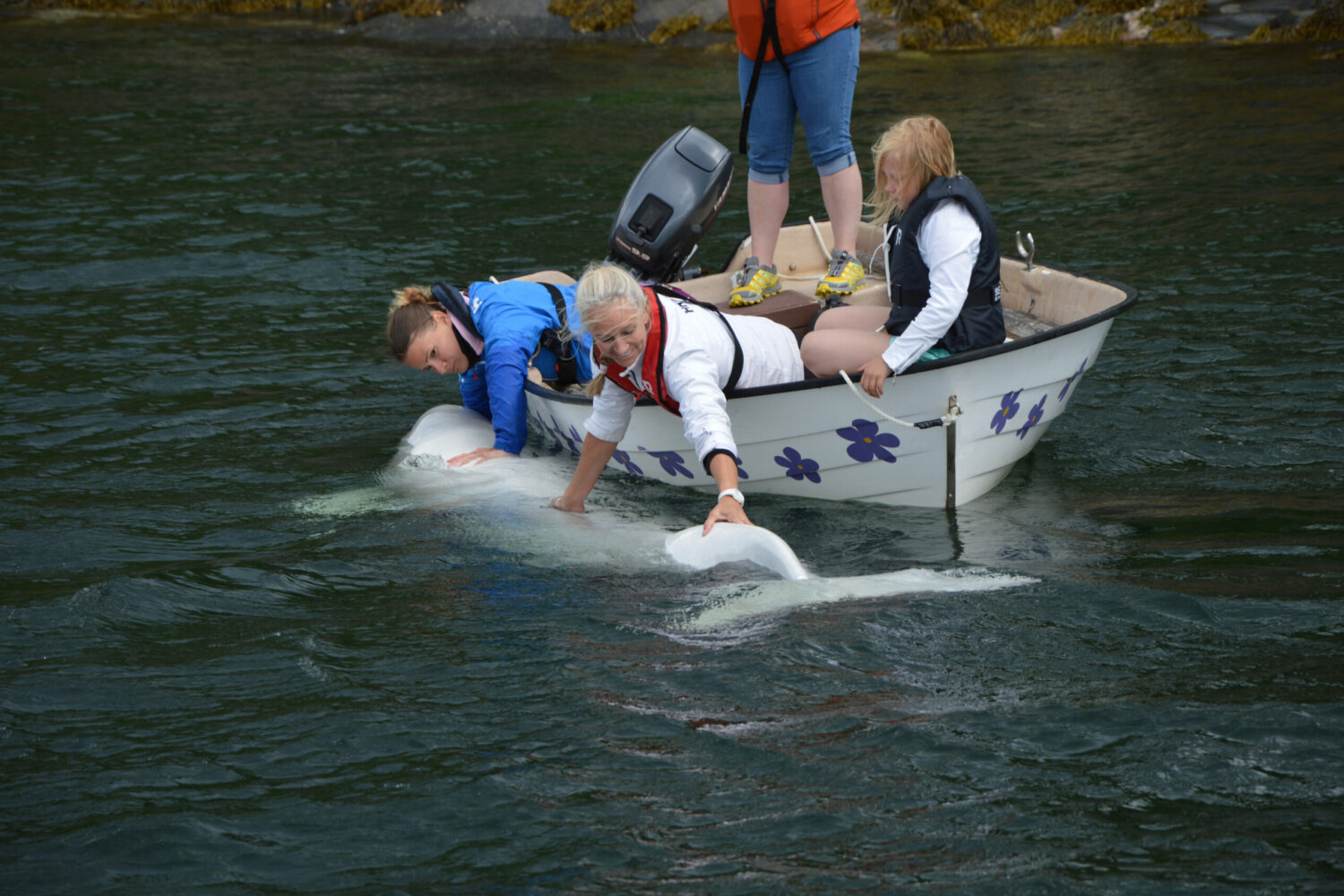 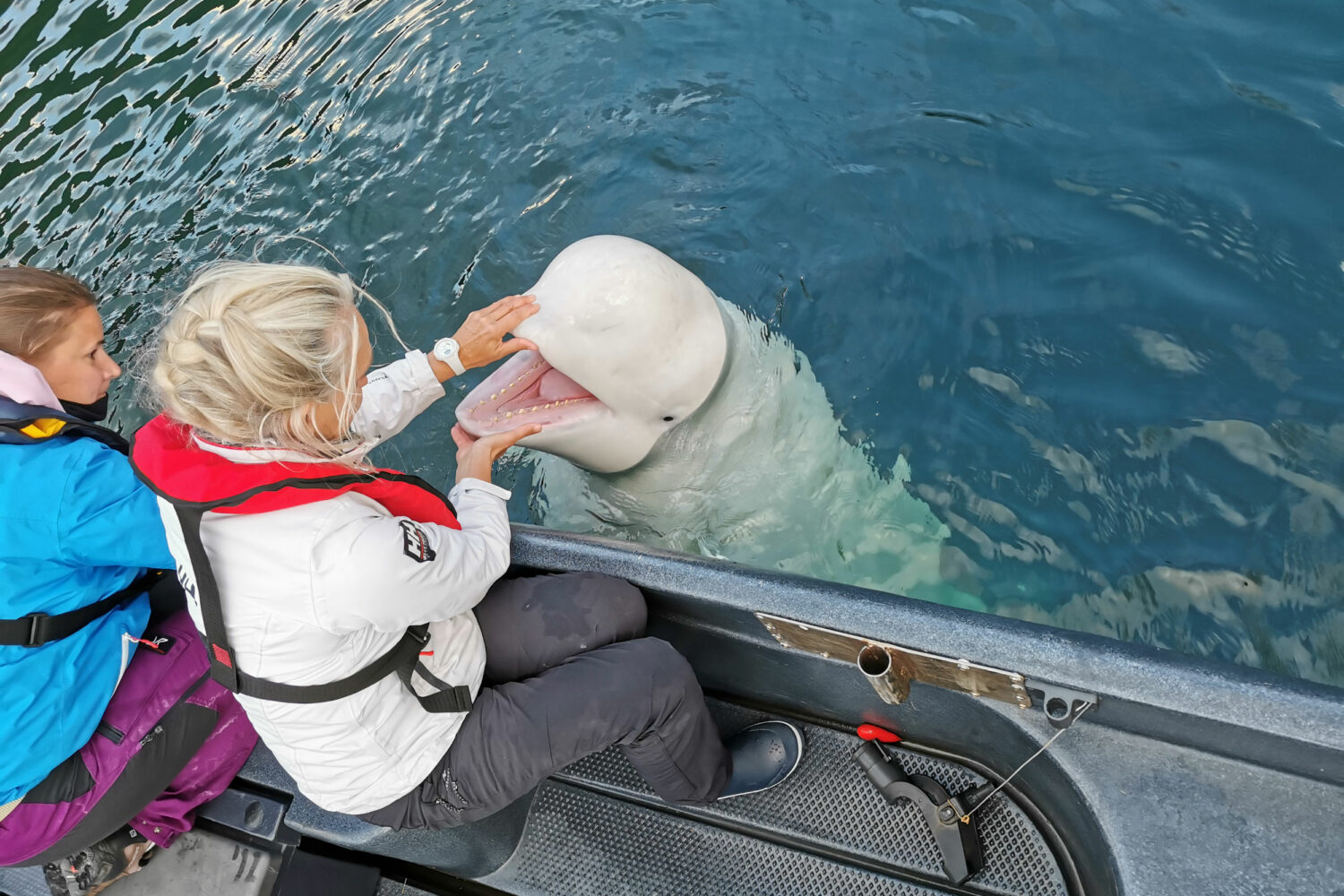 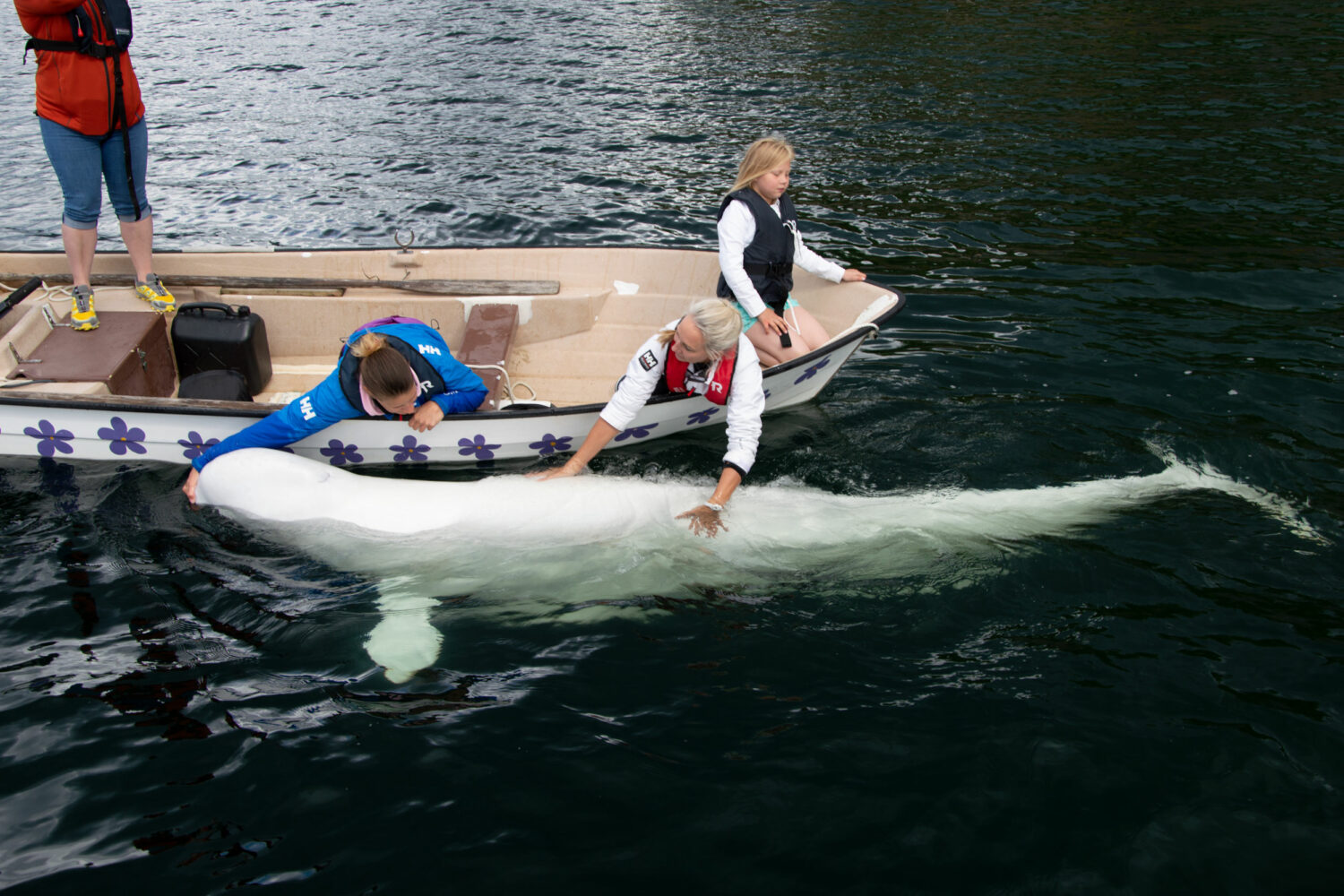 How important has it been to build relationships with the local communities?

Developing relationships with locals has been at the heart of our mission. Since first seeing Hvaldimir in Hammerfest, I have been able to connect with a community of Norwegians who share a concern for his well-being. By establishing a network of people who keep an eye on him, we have been able to create a greater awareness of what is in his best interests. For example, when he settles into a certain location, we try to communicate with people there who know most about his daily activities, like fish farmers, ferry drivers and harbour masters. They then report back to us. In summer 2020 [AG1] he settled near the town of Kjopsvik and ferry drivers would watch out for him and ask locals in more remote areas if they had seen him that day. This awareness created a connected community that would look out for him and try to protect him from other people’s reckless behaviour.

What have you learnt about his behaviour?

He seems to seek out people. Wherever he goes – a small dock, a fish farm with a maintenance boat, a small group of people who pay attention to him – he appears to have a ‘recipe’ for the location. Fish farms seem to be a constant for him, possibly because it’s easy for him to catch a meal, but perhaps also because they are familiar from his past life. The harness he was found in suggests he had been trained and his initial reliance on humans for food and his habit of following boats lend support to this theory. He also demonstrates an affinity for scuba divers and apparently tries to ‘help’ divers working around salmon nets. He is now foraging for himself, but this continued interaction with people may be fulfilling a social need. Belugas are highly social, so I think people serve as a substitute for ‘family’. Unless this need can be satisfied by other belugas, he will continue to seek human companionship.

What would be the benefits of long-term monitoring?

Although we can’t fully manage risks like boat collisions, entanglement in fishing gear or predation by orcas, long-term monitoring allows us to provide support if needed. In June[AG1]  2020, Hvaldimir was apparently hit by a boat and received a dramatic injury to his back. Our team was able to communicate immediately with the fisheries department and specialist veterinarians, but fortunately, the wound healed well and there was no need to intervene. To most people, he is a ‘wild whale’ and these are normal risks for wildlife. My feeling is that if transferring Hvaldimir to a natural habitat where he can find and socialise with other belugas can’t happen, then the least we can do is monitor him and seek to educate his temporary guardians as he settles into new locations.

Lost and alone, Hvaldimir the beluga whale appeared in Norway in 2019 seeking interaction with people. He was clearly once captive, and leading cetacean expert Lindsay Rubincam and her team will monitor Hvaldimir’s movements, condition and behaviour to ensure his welfare and lend support to determine the best course of action for his rehabilitation.